For some time I’ve been meaning to do a series of articles focusing on Redwood City’s different neighborhoods. Lately the City Council has taken a more visible interest in our numerous Neighborhood Associations, and so I’ve decided to periodically write an article highlighting one of those recognized neighborhoods. Lately I’ve been spending a lot of time in part of the Friendly Acres neighborhood, so I’ve elected to focus this, the first of my “neighborhood posts,” on that particular neighborhood. I recently made a couple of walks through and around the area to more thoroughly familiarize myself with it, and in this post I hope to give you a flavor of Friendly Acres.

In case you aren’t aware, the city is currently divided up into seventeen neighborhoods:

The above web page not only shows the city divided into the various neighborhoods, it also contains links to pages for each neighborhood association. For each, the corresponding web page includes a somewhat more detailed map of that neighborhood along with information about who chairs the association and when and where they meet (if they have a board that has meetings; not all associations do). Friendly Acres, for instance, is one that has a working association that seems to meet monthly.

Here is the city’s map showing the extent of the Friendly Acres neighborhood: 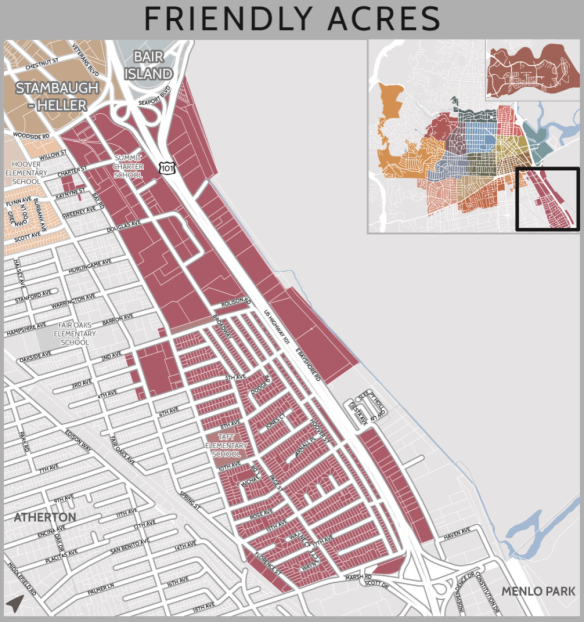 As you can see, this particular neighborhood is, with some minor exceptions, neatly bounded by Woodside Road at the north end, Marsh Road at the south end, Bay Road on the West, and the bay itself on the East. There are a couple of extra properties that stick out to the West, and as you can see, the southeast corner does not go all the way to the bay lands. That bit of gray on the east side of 101 near the bottom of Friendly Acres lies within Menlo Park, and is home to (among other things) two new large apartment complexes (Anton Menlo and Elan Menlo Park). Across from these apartments, in that small strip of red right up against highway 101, you’ll find Redwood City’s own Carlsen Porsche and Tom’s Outdoor Furniture.

Staying on the east side of Highway 101, but moving northward, much of the property between the highway (actually, East Bayshore Road, which largely parallels the highway on the other side of the sound walls) and the bay consists of mobile home parks. Although many Redwood City residents may not have visited those particular residential communities, most of us have seen them on the news: they are where the city has historically had its most significant flooding issues.

Continuing northwards, you’ll find both Hayward Lumber and a handful of mini-storage facilities. What you won’t find are grocery stores or restaurants: just housing surrounded by light-industrial properties. This, with some exceptions, is the pattern followed by the Friendly Acres neighborhood as a whole: it consists of a large chunk of housing—mostly single-family homes, but also a large set of townhomes built by Habitat for Humanity, and some subsidized housing out near the freeway—and a bunch of light-industrial buildings. There are a few shops and restaurants, but they are largely confined to two of the extensions to the otherwise fairly clean shape that defines the neighborhood. I’ve highlighted those two parts of the neighborhood—parts that almost seem to have been chosen in order to give the neighborhood some retail to call its own—in the following: 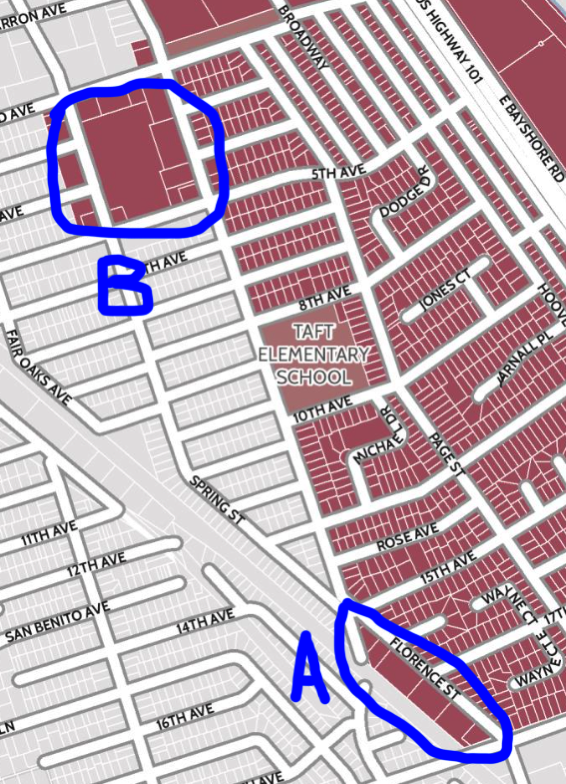 Section B is almost not worth noting: most of the block is consumed by that tall AT&T tower you can see from many parts of the city. But here, on the corner of Fifth Avenue and Spring Street, you will find a 7-11 convenience store. This block also boasts a hardware store, an Akido studio, and Nazareth Ice Oasis, one of the peninsula’s only remaining ice skating rinks. Adjacent to this block, and still within the neighborhood boundaries, you’ll also find Hacienda Taqueria and a combined Mobil gas station and Tacos El Grullense E&E #3: 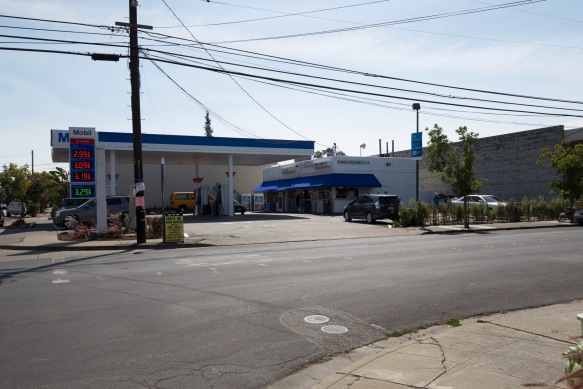 The section I’ve marked “A” on the above map is where the bulk of Friendly Acres’ retail lies: it’s where you’ll find the Marsh Manor Shopping Center. This center has a recently remodeled Delucci’s Market & Delicatessen, Squeeze In (a breakfast and lunch place that claims to have the “best omelets on the planet”), Freewheel Brewing Company, a Starbucks, and several other businesses of the type you typically find in a residential shopping center.

Finishing up the retail picture, at the far north end of the neighborhood along Woodside Road you’ll find Smart & Final, a small warehouse-style grocery store. But that’s about it. The now-mostly-shuttered shopping center just north of Woodside Road, with its still-open CVS drug store and its Denny’s and Jack in the Box restaurants, is beyond the bounds of the neighborhood, for instance. Not that the neighborhood boundary means much in practical terms, of course: just because one lives in a particular neighborhood doesn’t mean that they are confined to that neighborhood. But when characterizing Friendly Acres, retail and restaurants make up very little of the picture.

I mentioned housing. If you look back at the map, it is pretty clear where most of Friendly Acres’ housing can be found: in the lower portion where all of the small, regular streets can be seen. Most of this area consists of single-family housing, although there is an apartment building or two, such as this one immediately adjacent to the Stanford Medical Outpatient Clinic:

Amidst the housing you will find Taft Elementary School, on a campus along with the Redwood City P.A.L. Community Center and KIPP Excelencia Community Prep. The Taft campus has some large playing fields that undoubtedly get used by community members on weekends and off hours. This makes up for the fact that Friendly Acres has little in the way of parks—just little Andrew Spinas Park, which I’ll get to in a moment.

Friendly Acres is also the home of Summit Prep, a charter High School located in the light-industrial part of the neighborhood, at the corner of Broadway and Charter Street. And then there is this odd little attachment to the neighborhood: 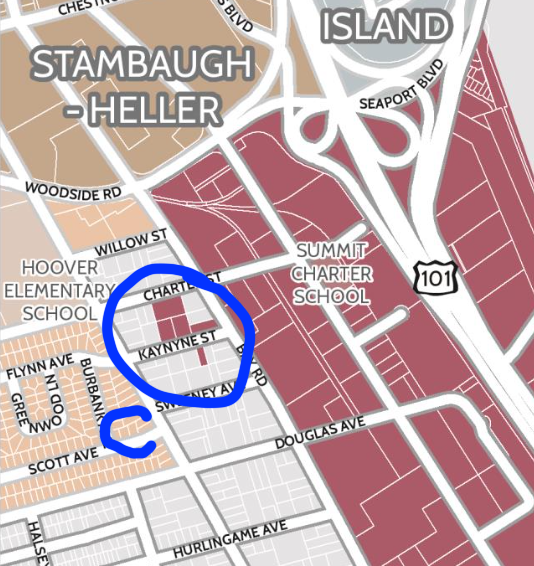 This is one of those places where the city boundaries get really squirrelly. In the circled section the five red parcels are in the city, while the gray parcels that largely surround them are on county land. Of those red parcels, the uppermost one (which sits, like Summit Prep, on Charter Street) contains a large warehouse-style building where Rocketship Education, a private charter school company, hopes to house Redwood City Prep, a K-5 charter school that today is housed on the John F. Kennedy Middle School campus. Rocketship has been working hard to gain the necessary approvals to convert its building and the next-door parking lot (which is actually on county land) into a school, but they are encountering fierce opposition from the surrounding businesses, many of whom point out that siting a school in an area where large trucks make deliveries and pickups at all hours of the day would be both physically and environmentally unsafe for the children attending that school. Thus, although the school has managed to gain approval from the city’s Planning Commission, that approval has been appealed, and thus Rocketship’s future here is as yet uncertain.

In addition to a wide variety of small-to-medium-sized businesses in the light industrial section of Friendly Acres, the neighborhood also boasts our main post office, a large 24-hour Fitness, and Motostrano, a shop that purports to have the “largest inventory of electric bikes in Northern California.” Here, too, you’ll find both Pets in Need and the offices and warehouse for Rebuilding Together Peninsula, a charitable organization that uses donated materials and volunteer labor to improve the homes of low-income homeowners. But anyone who is at all familiar with the area knows that I have yet to mention the neighborhood’s 600-pound gorilla: Friendly Acres is, of course, where you’ll find both the Stanford in Redwood City project (about which I’ve written much; see my post Strolling Along Fifth Avenue for the most recent) and the Stanford Medical Outpatient Center. I won’t say much about those here, other than to note that they occupy a significant percentage of the land that makes up the Friendly Acres neighborhood, and that the construction that is currently taking place on both properties must be difficult to endure for the area’s residents. 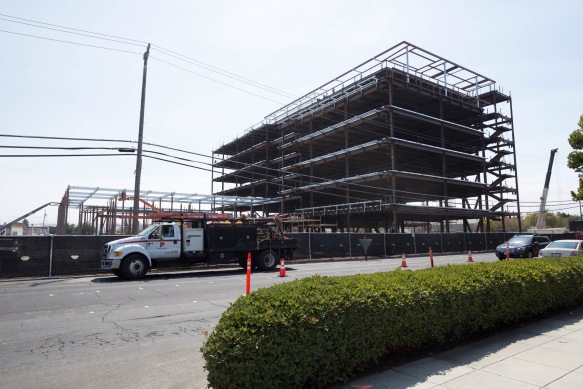 Once the Stanford in Redwood City campus is complete, though, it will bring some welcome benefits to the neighborhood. Not only will Stanford be running a free Marguerite Shuttle between Redwood City’s downtown and the area—a shuttle that will be free for area residents to use—but the new campus will include a fair amount of public space that can be enjoyed by neighborhood residents. In particular, the small (about 1.5 acres) Andrew Spinas Park, which is located at Second Avenue and Bay Road, abuts Stanford’s property, and Stanford’s plans call for a large area of open space adjacent to that park. Although this open space will remain the property of Stanford University, it will consist of grass, trees, benches, and paths and will connect directly to the park. Its large open grass field should, in particular, complement the existing park very nicely, which today is largely made up of a tennis court, a half basketball court, and a couple of nice play structures.

That about does it for Friendly Acres. It is a neighborhood that is about half residential and half light industrial, with a large Stanford presence roughly in the middle. Friendly Acres has great freeway access, extending as it does from Woodside Road on the North to Marsh Road on the South, with Highway 101 running right through the neighborhood. It also has relatively easy access to downtown Redwood City: one need only drive right up Broadway.

Is Friendly Acres “friendly”? Only the folks who live there can tell us. Hopefully some of them will let us know in the comments. But I certainly feel comfortable walking through there, and the residential sections have a casual, neighborly feel. As for the light-industrial sections, they feel about as you’d expect. Friendly isn’t the word I’d use for those, but there are plenty of sidewalks, which I certainly appreciate. And there are interesting businesses here and there throughout, which does make a walk through that part of Friendly Acres enjoyable, if not actually friendly.