This is the eleventh in my series of blog posts about specific Redwood City neighborhoods. Our city leadership divided Redwood City into seventeen separate neighborhoods, each with its own neighborhood association. My aim with these posts is to capture the essence of each neighborhood, hopefully identifying what makes each neighborhood special. This week’s neighborhood, Redwood Village, feels quite different from the other sixteen. For one thing, I believe that it is the smallest. For another, it has a fascinating dual nature, with clusters of single-family homes (and some apartments and duplexes) plus Hoover School and Park almost entirely surrounded by busy streets lined with a variety of commercial enterprises.

Redwood Village lies to the south of Woodside Road (technically, it lies more east than south, but most people think of Woodside Road as running east to west, so I’ll treat the neighborhood as if Woodside Road really did have that orientation), extending down to Douglas Avenue. In the other dimension it stretches from the Caltrain tracks to Bay Road. However, it doesn’t form anything close to the nice, neat rectangle that my brief description implies. The Redwood Village neighborhood helps to form one of the edges of the city, and here beyond the city border lies an unincorporated section of San Mateo County known as North Fair Oaks. That city border jogs back and forth throughout this area, giving the Redwood Village neighborhood a rather strange shape:

Because of its size, Redwood Village is one of those neighborhoods in which I was able to walk every street, all in a single afternoon. I’ve of course walked large parts of it in the past, but before doing the research for this blog post I had never been through the center of the neighborhood’s largest residential section. I’ve walked all of the streets that define the perimeter of that section — Charter Street, Spring Street, Douglas Avenue, and Middlefield Road — but had never before entered this somewhat secluded part of the neighborhood. As you can see from the above map, the only way into this residential area, which to my eye is shaped like a guitar headstock, is either from Middlefield Road via Flynn Avenue, or from Spring Street via either Kaynyne Street or Sweeney Avenue.

As for what you’ll find in there, it is a delightful little area mostly full of small single-family homes on somewhat small lots (the average lot size in this neighborhood is about 5,200 square feet). The streets are lined with mature, leafy trees, making this an interesting little oasis in the middle of what otherwise simply seems to be a mix of retail and light industrial businesses.

The majority of the homes in this part of the neighborhood are small single-story houses with attached single-car garages, although there are a number of two-story homes as well. Here is a typical home in the area:

One of the area’s only homes of any real size sits at the corner of Flynn and Burbank Avenues. According to Redfin the house is nearly 2,600 square feet in size, with five bedrooms and four-and-a-half bathrooms. It looks beautiful, although the trees in the home’s front yard make the house a bit hard to see: 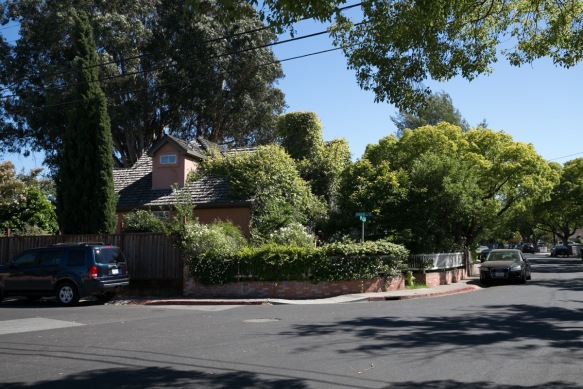 Out on Middlefield Road, some of the parcels in this section of the neighborhood contain two-story apartment buildings (for instance, between Charter Street and Flynn Street), while the other parcels contain a variety of businesses, such as Tacos El Grullense E&E, an Auto Body shop and a dance studio.

Across Middlefield Road the small appendage near the bottom of the map is where you’ll find the Fair Oaks Community Center and, strangely enough, only the right-most of the three businesses you can see in the following photo: 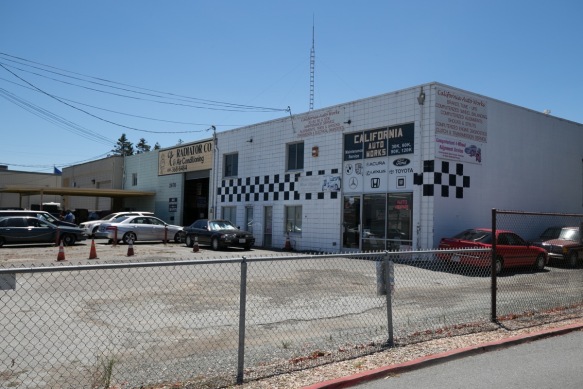 Even though the three similarly sized buildings all abut one another, only the one with the checkerboard strip across it is in the city of Redwood City. The radiator repair (“& Air Conditioning”!) business that sits up against it is in North Fair Oaks. As best I can tell, the Redwood City border runs right between these two businesses.

Where Charter Street runs into Middlefield Road you’ll find our Costco; it is of course in Redwood City (and in the Redwood Village neighborhood, in fact), although everything between the Costco and the Fair Oaks Community Center to the south is not. In this odd bit of “not Redwood City” you’ll find a large public storage business, Cocola Bakery, San Mateo County’s Human Resources Agency, and the Fair Oaks branch of the Redwood City public library.

I mentioned that Costco is within Redwood City’s borders, as is the entirety of that property, including the Burger King restaurant and the now-empty Orchard Supply Hardware building. Also within the Redwood City limits are the Caltrain tracks and a long, narrow lot that parallels the tracks between those tracks and the OSH and Costco buildings. I peeked over the fence, and was puzzled for a moment as to who was installing large electrical transformers on the lot, and why. Then I remembered that the Caltrain line is being electrified, so that Caltrain can run electric locomotives instead of diesel ones. That must be what they are doing back there: 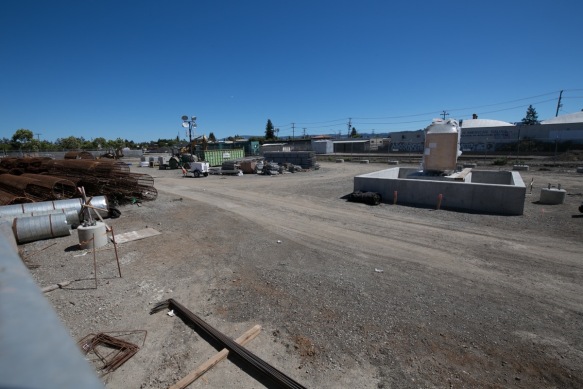 Speaking of the Orchard Supply building, it has been completely cleaned out. I was pleased to note that the building and the landscaping throughout the parking lot both appear as if they are being well maintained. I continue to keep an eye on the building, curious to see if and when it will get a new tenant.

While in the area I did wander along the small stub of Manzanita Street that provides access to Bay Area Self Storage (which sits at the end of the street, over by the OSH building). At one time there apparently were four residences along this street, although two of them are now being used as businesses. The one that sits at the corner of Middlefield Road is home to Pro Group Cellular, while the next house in serves as the offices of CEO Construction. The remaining two, however, do appear to still be single-family residences. I particularly liked this little place:

I like the classic look of the house, but I’d never live there: the house backs up onto Woodside Road, and it faces the Orchard Supply Hardware parking lot, across Manzanita Street. Not my idea of a cozy residential street, I’m afraid.

Behind these Middlefield Road businesses the remainder of the six blocks (four of which are on Middlefield Road, and two of which lie to the east) contain a mix of single-family homes, duplexes, and apartment buildings. I found myself particularly captivated by this old (but not necessarily historic, it seems) two-story house at 530 Manzanita St.:

This house is the only two-story single-family home in these six blocks, and as you can see it is desperately in need of some TLC. Fortunately, it does seem to be getting the care it needs. The house is being completely remodeled as a duplex, and apparently is gaining an all-new two-car garage. If the remodel is done well, this place should be a real asset to the neighborhood when completed.

To the east of these six blocks is one of the centerpieces of the Redwood Village neighborhood: Hoover Community School and Hoover Park (including the Boys and Girls Club of the Peninsula building). Hoover School is one of the Redwood City School District’s larger campuses, boasting some 750 students in grades K-8. When I was there school was not in session, and the school seems to be taking advantage of that fact: they appeared to be doing some heavy maintenance.

The playing fields — which are part of the adjacent park, and not the school, apparently — looked spectacular, having just recently received new artificial turf:

I do wonder how the kids keep track of all of those colored lines. I presume that they are each for a different sport, but it sure looked confusing to me…

The bulk of the ten-acre park — which a wooden sign proudly proclaims is “Hoover School Park” — is made up of those playing fields, but it also includes a section with play structures, picnic tables, and bathrooms. Hoover Park technically also has a public swimming pool, although that appears to be closed at this time.

The Redwood Village neighborhood contains one final section, a small single-block appendage bounded by Woodside Road, Bay Road, Willow Street, and Spring Street. This one block appears to contain only a handful of businesses: Extra Space Storage, Bosch European Car Repair, and a large building that at 2225 Spring Street that is unlabeled but appears to be US Bank Check Capture (I’m guessing that this is where US Bank sends their customer’s paper checks to be digitized). I noted that Spring Street in front of US Bank’s building appears to be a popular spot for the homeless:

I have to think that these folks appreciate the facilities at Hoover Park, which is located directly across the street.

The Redwood Village neighborhood is an interesting one. To my mind, the neighborhood has a dual nature, with most people only aware of its commercial side. Those of us who don’t live in the neighborhood likely only go there with a specific goal in mind. Whether that is Costco, Hoover School, Sigona’s, the Fair Oaks Community Center, or the neighborhood’s two large self-storage businesses, the fact that the neighborhood’s residential portions are clustered into two small, somewhat hidden residential oases means that you could go to any of those aforementioned places without being cognizant of the many people living very nearby. As for the many people who live in those residences, it appears that it would be easy for them to arrive home and put the surrounding hustle and bustle out of mind. For these Redwood City residents, the ease of accessing the surrounding businesses and the park must be a real plus. As I can personally attest, the neighborhood is very walkable, so getting to any of the businesses or the park on foot from anywhere else in the neighborhood should be quite easy.

Redwood Village is a fascinating place, with its residential portions earning the moniker of “hidden gem” in my mind. It has a handful of popular businesses and a well-attended school to boot, making it far more than it seems at first glance. Redwood Village may well be the smallest of Redwood City’s seventeen neighborhoods, but in terms of importance to the city at large, this neighborhood is by no means small.