It’s been a while—nearly two months, as it turns out—since I last wrote about one of Redwood City’s 17 neighborhoods. Last time I took a look at the Canyon neighborhood; this week I spent time exploring one that is both rich in history and a popular site for development: Stambaugh-Heller.

The Stambaugh-Heller neighborhood is one of Redwood City’s most easily defined. In shape it is basically a rectangle, with the four sides being Highway 101, Woodside Road, El Camino Real, and Maple Street. It is also a fairly small neighborhood, with the short side of the rectangle along El Camino Real being only about five blocks long. The longer sides, just for the record are roughly twelve blocks in length.

Because Stambaugh-Heller lies adjacent to Redwood City’s downtown, it has long been a popular area in which to live. Today it is more a blend of residential and commercial properties, which if anything makes the neighborhood an even better place to call home: residents can easily walk to a wide variety of stores and service businesses. But the fact that people have been living in the area for so long makes it a particularly interesting neighborhood, since it contains a number of historic homes along with a few historic buildings.

When researching the area the first question that occurred to me was, just who were Stambaugh and Heller, anyway? I did some digging and learned that Dr. Solomon S. Stambaugh was “an early pioneer who practiced first in Searsville and Pescadero.” He once owned a drugstore at the corner of Middlefield Road and Main Street, and at some point in his career Stambaugh was the County Coroner. For a time he even lived on the street that was named for him, although it may have been after the street was created: he was the first owner of the “Stambaugh-Ross-Barret House,” which still stands today at 427 Stambaugh Street.

As for Heller, he proved a bit harder to track down. Fortunately, Ken Rolandelli, who is a long-time member of Redwood City’s Historic Resources Advisory Committee, supplied me with what I believe is the right answer: George Heller, “a substantial early citizen of Redwood City, [who] bought and sold many parcels of land, while running a livery stable on Main Street near the commercial center.” He seems to have once owned the John Offerman House, at 1018 Main Street—which today is the home of The Main Gallery, an artist’s cooperative that showcases local talent through the gallery’s rotating shows. (Lest there be any confusion, the gallery itself is not in the Stambaugh-Heller neighborhood.)

The gallery may not be in the Stambaugh-Heller neighborhood, but there are a number of historic homes that are. One you’ll find sandwiched between a McDonald’s and a small market: the Joseph B. Perry house, at 1414 Main Street. I understand that there used to be a number of old homes along this stretch of Main Street, but today it stands alone. Fortunately, this little Craftsman bungalow, which was built in 1910, seems to be fairly well cared for:

Elsewhere in the neighborhood there are some real head-turners. For instance, there is the Christian J. Hynding residence (along with its similarly styled next-door neighbor, the so-called “Anna’s Peninsula Tamale Parlor”) at 446 Heller Street:

Or, there is the lovely two-story house at 397 Stambaugh Street. The roses climbing the trellis on the front of the house are particularly eye-catching, but the house itself is certainly worth a look. According to Redwood City’s inventory of historic resources this house, which was built in 1896, was originally only one story.

If you go by, note the house that sits across Stambaugh Street, on the corner of Stambaugh and Elm. It is the George Eikerenkotter residence, a house that dates back to around 1865. Unfortunately it is rather hard to photograph, due to a large number of tall cypress trees that guard the house on two sides. But the house is considered to be one of two “superior examples of Redwood City’s Greek Revival architecture,” so it definitely is worth a visit.

Not all the houses in Stambaugh-Heller are historic, of course. The neighborhood sports single-family residents of all shapes and sizes, along with a large number of apartment buildings. Most of the apartment buildings are pretty routine, but there are two in particular that caught my interest. The first sits on Main Street, and is one that most people might take for a small office building of sorts: 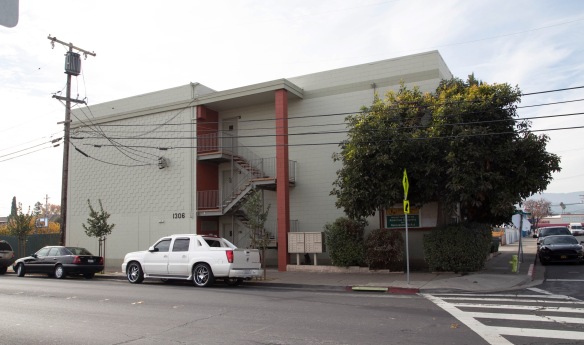 Built in 1962, the city purchased this rather nondescript building in 2009 for the purpose of providing affordable housing. It contains 22 studio apartments and one one-bedroom unit, which I believe is where the building’s manager lives.

Elsewhere in the neighborhood—over on Veterans Boulevard—is another assisted-living building. Casa de Redwood’s 135 apartments provide low-cost housing for seniors aged 62 and older. After a recent makeover Casa de Redwood is looking really nice—although I’m sad to say that it has has lost the signature redwood trees that previously stood between the building and the street:

All of the neighborhoods residents need places to play, and the Stambaugh-Heller neighborhood has one of my favorites: Jardin de Niños, at the corner of Chestnut Street and Middlefield Road. Ever since the park was rebuilt the city and the neighbors have been doing a great job keeping it up; it continues to look almost brand-new. And soon, it seems, work will commence on a small addition to the park. Adjacent to Jardin de Niños along Middlefield Road there is a small city-owned parcel that has been slated for just this purpose. According to Chris Beth, our Director of Parks, Recreation, and Community Services, that expansion has been on hold while plans for the Middlefield Road Improvement Project were being developed. Those plans are just about final, however, so very soon the city intends, in consultation with those in the neighborhood, to work out a design for the park’s expansion.

The only other park in Stambaugh-Heller is one that is rather specialized: the Main Street Dog Agility Park. Although not a general-purpose play area, the park seems to be getting a lot of use and also appears to be staying in good shape. I can’t recall a single time I’ve been by this park since it opened when there wasn’t at least one dog in it. Usually there are a handful, all running around and seeming to be having a good time.

Next door to the Main Street Dog Agility Park is one place where people used to play, but no longer: the Redwood Roller Rink. For now the property sits idle, surrounded by construction fencing. This parcel, plus the others along Main Street as far as Chestnut Street, are owned by our own W. L. Butler and appear ripe for a development project of some sort—although I have yet to see an official proposal. Butler, who’s current headquarters are within the Stambaugh-Heller neighborhood just across Chestnut from this series of parcels, is in the process of constructing a new HQ, also within the neighborhood:

That is the most visibly active development project in the Stambaugh-Heller neighborhood at the moment, but it likely will have company very soon:

Since it is nearly Christmas, I should note that the Stambaugh-Heller neighborhood is where you’ll find the normally empty lot that each year turns into a walk-through recreation of Bethlehem. Here at the corner of Middlefield Road and Cassia Street you and your family can, for free, experience Christmas in a very up-close and personal way. This year it will be open for three nights, on December 21, 22, and 23 from 6 p.m. to 9:30 p.m. Do note that there will be numerous pedestrians in the vicinity on those nights, so if you are driving in the area be sure to pay close attention. 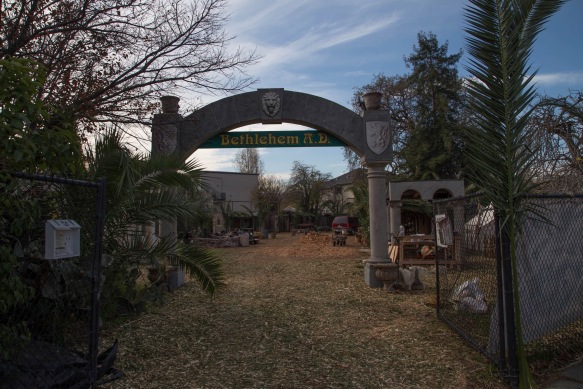 For those of us who don’t live in the Stambaugh-Heller neighborhood, most of our experience with it lies along the two main corridors that traverse the neighborhood from Maple Street to Woodside Road: Broadway, and Veterans Boulevard. The Broadway Plaza shopping center I mentioned earlier sits on Broadway, of course, as do numerous small businesses including General Tire, America’s Tire Company, La Viga (a wonderful seafood and Mexican food restaurant), Chiquitas (one of my favorite taquerias, on Broadway at Maple), Cari Blue Restaurant (they serve Caribbean food) plus numerous small businesses tucked in here and there. This last includes a new one: Chowbotics, who apparently design robots that do food preparation (as opposed to delivery; Chowbotics doesn’t make robots like those you see running around our downtown streets). As I discovered on a walk this week, they are housed in the quarter-round building that sits on Broadway next to the 7-11:

Within the Stambaugh-Heller neighborhood on Veterans is the Veterans Square shopping center. Here you’ll find “Hoot” Judkins (the wooden furniture retailer), Antiques Then & Now (formerly of San Carlos), and Party City, among other retailers. Behind the center, on Oddstad Drive, is where you’ll find Wag Hotels (for your dog boarding needs), The Jewelry Exchange, and, at the end of the street, Public Storage.

For one final stop on my little tour of the Stambaugh-Heller neighborhood, I just had to drop in and check on the former Schroeder Sheet Metal, Inc. shop building, which has been rebuilt as (I believe) a single-family home. This building, at the corner of Maple and Hilton Streets, is clad in barn wood and large steel plates. The house, which appears to be complete, received one final signature element: a beautiful living wall on the Hilton Street side: 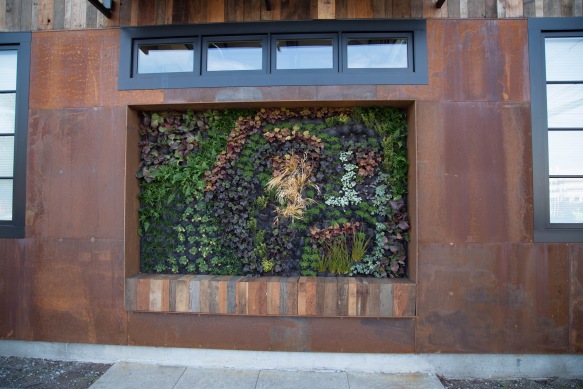 If you are in the area, do check this place out. This is gentrification at its finest.