Although I don’t live in the Canyon neighborhood, I live nearby and have been walking it for years. Unlike Friendly Acres, Canyon’s boundaries are tough to put into words. Very roughly, the neighborhood is bounded by Alameda de Las Pulgas, Edgewood Road, Cordilleras Road, Canyon Road, and Harding Avenue. But unless you are very familiar with the streets of Redwood City and can conjure up a map in your head, an actual map is clearly going to be more helpful (and will help you see some of the exceptions to the boundaries I just laid out). Here is the map from the neighborhood page on Redwood City’s website:

[click the map for a version you can zoom in on]

The above map is, of course, two-dimensional, which omits one of the Canyon neighborhood’s essential elements: it is hilly (but not mountainous; I’ll save that word for the Farm Hill neighborhood!) and indeed contains a canyon or two. Canyon Road, in fact, runs right down the canyon that likely gives this neighborhood its name. Oak Knoll Drive (which becomes Hopkins Avenue) runs perpendicular to Canyon; walking the neighborhood on either of these streets involves a fair amount of up and down.

One interesting aspect of the neighborhood is the fact that there is a large section of unincorporated properties—properties which are part of San Mateo County but are not within the Redwood City limits—buried within it. Many of the properties along Hillcrest Drive are outside the city limits, for instance, as are those along significant portions of Oak Knoll Drive and Upland Road. But given that the unincorporated section is entirely surrounded by the properties that do lie within Redwood City, perhaps the city saw no point in excluding that section from the neighborhood association—and thus that particular unincorporated section is not shown on the neighborhood map. The following is a map I quickly put together (ignore the upper-right corner, and the fact that I didn’t get the part around Garrett Park correct). The thing to notice is the large grey section in the middle: it indicates unincorporated land that is nevertheless considered to be part of the Canyon neighborhood.

The Canyon neighborhood is overwhelmingly made up of single-family homes, many of which are quite pricey. I spent a bit of time prowling through the area on Zillow and didn’t find a single home that was estimated (by Zillow) to be worth less than $1.1 million. Most appear to be worth upward of $1.5 million, in fact, and there are a fair number of single-family homes in the Canyon neighborhood that, according to Zillow at least, could fetch upwards of $3 million if put up for sale. And in this neighborhood you can occasionally see the extremes side-by-side, as you do on Hillcrest Drive:

Years ago there were a lot more older homes like the former in the Canyon neighborhood, but these days they are few and far between. The last several years have been boom years for the construction industry in this area (as in much of the Bay Area), and many older homes have been either drastically remodeled or, as is the case with the newer house in the above picture, completely torn down and replaced. Very few of the really old homes appear to remain in this particular neighborhood. Walking through the neighborhood I could hear hammering noises echoing up and down the canyon: there are a fair number of remodels, and new homes being built there, even today.

The Canyon neighborhood is largely made up of single family homes of all shapes and sizes. Don’t blink or you’ll miss the neighborhood’s few multi-family buildings. All, I believe, are clustered around one of the neighborhood’s other attractions: the Emerald Hills Shopping Center. Immediately adjacent to the center is an eleven-unit apartment building: the Canyon View Apartments. Kitty-corner from the shopping center, on the corner of Canyon Road and Oak Knoll Drive, is a nine-unit apartment building. Across Canyon from the center is a small three-unit building. And adjacent to that small building, along Canyon Road, is a six-unit apartment building that I’ve been watching for some time: 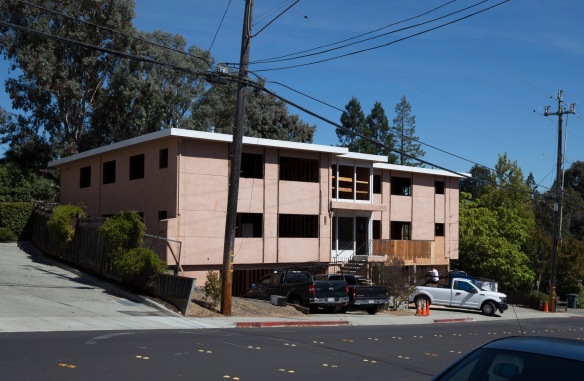 Many months ago I noticed that this small apartment building at 615 Canyon Road appeared vacant, so since then I’ve been paying attention to it every time I am in the area. It sat empty and apparently idle for quite a while, but recently a construction crew moved in. Demolition appears to be complete, and now workers are actively shoring up the building and framing up new walls. I know nothing about the project except what I’ve been able to observe from the sidewalk, but I’m guessing that the building is being upgraded and that the rents, once the building is back online, will be higher (possibly much higher) than they were prior to construction.

Getting away from housing, the neighborhood also has the afore-mentioned Emerald Hills Shopping Center, plus two parks (technically, one and a half), a gas station, the Canyon Inn restaurant, two churches, and, of course, Sequoia Hospital. The shopping center is on the small side, but after its recent remodel (before which the market space sat empty for quite some time) it now boasts five restaurants (Speederia Pizza, Emerald Hills Cafe & Roastery, Sancho’s Taqueria, Hillside, and Kaigan Sushi), a dry cleaners, two salons, a fitness center, an insurance agent’s office, and Bonfare Market. This market, which is about half the size of the one that once dominated the center, is tightly packed. It has basic items such as milk and eggs, soaps and soups and cereals, and some produce, but also has a relatively large liquor department and a lot of items that seem to be aimed at schoolchildren: candy, sodas, and pre-packaged baked goods. There is also a small deli, and a couple of tables outside where you can consume your purchases if you so desire. It’s more than a 7-11, but much less than, say, Safeway. The parking lot, which serves the entire center, is small, but then again this regional center likely gets a lot of walk-in trade.

Across Oak Knoll from the shopping center is the neighborhood’s one gas station: Canyon Gas and Propane/Canyon Auto Service. Across Canyon from the gas station is the ever-popular Canyon Inn, which has been serving burgers, fries, and beer (and a variety of other things) to sports teams, sports enthusiasts, and families since 1973:

As for parks, the neighborhood has two: Dove Beeger Park, on Whipple Avenue across from Sequoia Hospital, and Garrett Park, on Glenwood Avenue. Both are named for individuals who were important to Redwood City’s history.

Incidentally, keen-eyed observers may have noticed some parallel lines running from near the lower right corner of the city’s neighborhood map to near the upper left, as well as the other set that zig-zags its way up from the bottom of the map (towards the left), alongside Garrett Park, and on up towards the top. These mark the path of two Hetch Hetchy pipelines that cut through the neighborhood. The land above the buried pipelines cannot be built upon, so when exploring the area you’ll notice the long, straight sections of undeveloped land that mark the pipe’s path. Some of these sections are open to the public, while others are completely fenced off, seemingly with no rhyme or reason. Given that they would make excellent walking trails, the fact that some parts are closed is a real shame. 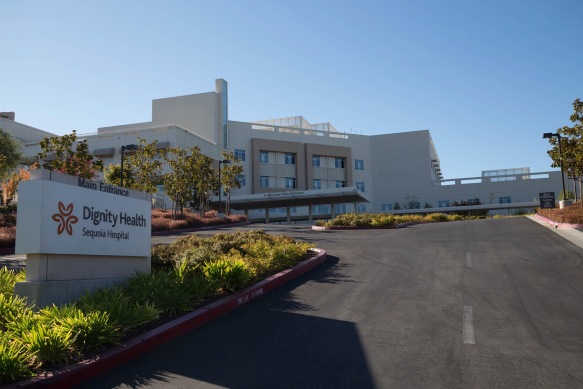 The new hospital has some nice gardens and outdoor seating areas, and overall it is a very nice facility. The main entrance is somewhat forgettable, but a hospital should put function above form, and Sequoia does that in spades: Sequoia has been recognized nationally as one of America’s top 100 hospitals for cardiac care, its Birth Center is a favorite among Peninsula families, and it is well-regarded both for its Center for Total Joint Replacement and for its comprehensive emergency care. I can personally attest to two of those: my youngest son was born at Sequoia Hospital, and my family has taken advantage of the emergency room facilities on more than one occasion.

The Canyon neighborhood is a delightful place in which to walk. Its hills provide a great cardiovascular workout, and if you enjoy looking at houses there is a lot to attract your attention. For the most part the neighborhood’s streets are fairly quiet, and except for in the unincorporated parts (I’m looking at you, Oak Knoll Drive) there are plenty of sidewalks. Emerald Hills Shopping Center is a great place to get a coffee or a snack, and the neighborhood’s parks are nice places to take a rest. Based on all that it offers, the Canyon neighborhood must be a really great place to live.