It sure is good to be back in Redwood City! For the last couple of weeks I’ve been in Portland (Oregon), first to see the eclipse and then to attend my son John’s wedding. My wife and I hung around for almost a full week afterwards to spend time with family and friends who, like us, had traveled to Portland. We ended up staying slightly longer than planned because a couple of our family members, who came for the wedding from Houston, suddenly found themselves without a way to get home. Thanks to Hurricane Harvey, their return flights were canceled for several days in a row. They actually never did fly back into Houston: instead they ended up taking a flight to Dallas, from which they caught a ride back home with a neighbor who was there to stock up on essentials such as food, gasoline, and toilet paper, all of which were in short supply in Houston at the time. Fortunately their home weathered the storm with little trouble, so at least our relatives had a home to go back to.

On our drive up to Portland, and then even more so on our drive back home, we couldn’t help but notice the smoke from the wildfires affecting both California and Oregon. We had one or two smoky days in Portland proper, but the air was fairly clear when we finally left. Not too far south, though, as we drove down I-5, we started to notice the smoke again. By the time we got to Grants Pass it got quite thick. It continued to thicken all the way to Mount Shasta, to the point where the mountain was completely invisible from the freeway overlook. Only when the freeway got really close to the mountain were we able to see Mount Shasta at all—and even then, it only appeared as a faint, ghostly image amid the heavy smoke.

Between the floods in Houston, the fires in Oregon and far northern California, and the heat—Portland has had some record-breaking heat over the last several weeks—I longed for Redwood City and its “Climate Best by Government Test”. After we got home I realized that Redwood City’s motto isn’t enough to protect it from the heat, at least: Redwood City has certainly had its share of warm, even record-breaking, days. But as I write this, with Hurricane Irma having laid waste to various Caribbean islands and now making a beeline towards Miami (and with two more hurricanes behind it), and after hearing tales from my children of ashes raining from the sky in the Portland area, the thought of a couple of 100+ degree days pales into insignificance. Relatively speaking, our climate still is one of the best—and I’m glad to live here.

Weather, interesting as it is, isn’t what I plan to focus on this week, however. After a couple of weeks away, I was eager to get back to pounding the sidewalks of Redwood City, to see for myself what’s been going on lately. Thus, this week I walked what I tend to think of as my “big loop,” which takes me north to the San Carlos border, heads down El Camino, winds through downtown Redwood City, and heads up Woodside Road to Woodside Plaza. While there is a lot more to Redwood City than just these areas, they tend to be the ones with the most action these days (barring the Stanford in Redwood City project, which is of course chugging right along); by taking this walk I can quickly come up to speed on much of the goings-on in Redwood City.

First up, I thought I’d present you with a small puzzle. See if you can guess where, while on my walk, I saw what must be one of Redwood City’s few remaining pay phones: 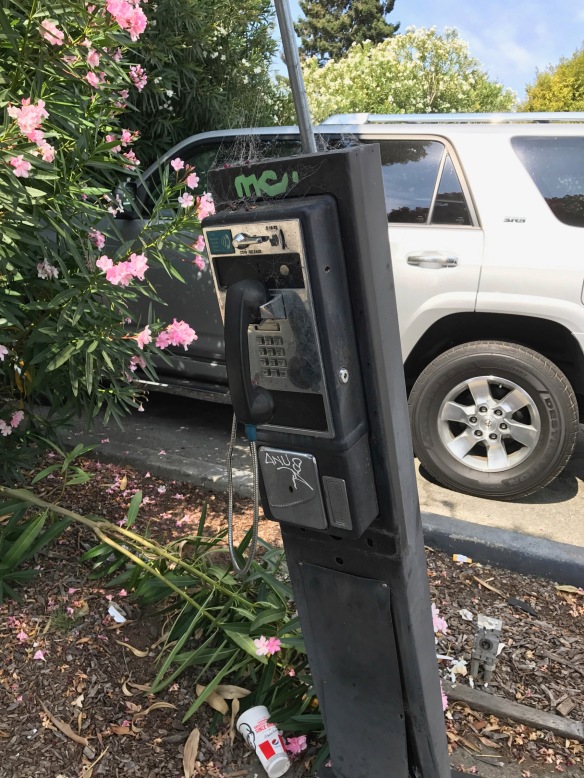 I’ll supply the answer at the end of this post, in case you want to show your children how we used to live back in the old days…

Redwood City’s latest project—the construction fences went up just this week, after I got back—probably has many of you are wondering just what is going on at the corner of El Camino Real and Broadway: 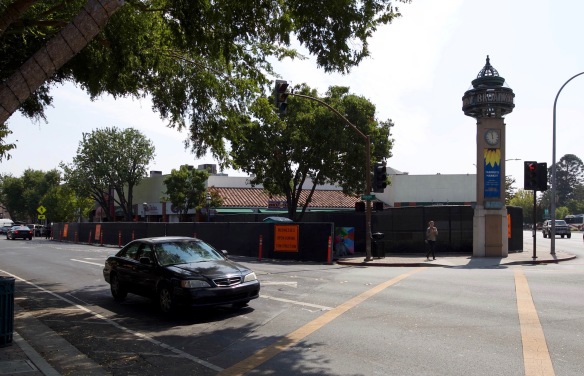 The short answer, which I obtained from a city staffer, is that this is just a soil remediation project. Contractors are apparently removing contaminants of some sort from the ground, and judging by the construction fencing those contaminants lie beneath the small parking lot on the corner. Many years ago this corner was home to a Union service station; I don’t know if the contaminants are from that, or are from some other source. Regardless, the fencing completely surrounds the parking lot but is carefully placed to allow access to the building’s various businesses: Bangkok Bay, Ike’s Lair, Zadna Mediterranean, Shiny Nails, and Naranjo’s Taqueria, all of which remain open. The parking lot is closed, however, as are a handful of street spaces on the Broadway side of the property. A separate set of construction fences surround those street spaces to form an enclosure for both construction-related equipment as well as the dumpsters used by the affected businesses (those dumpsters are normally kept within a small enclosure in the parking lot—an enclosure that will be inaccessible during the remediation project). Fortunately the sidewalk, which passes between the enclosed parking lot and the fenced-off street spaces, remains open.

I’m a big booster of local merchants in general, but given how this project is likely to negatively impact this set of businesses, do make an extra effort to patronize them during the period of construction, which apparently will run through mid-November. Bangkok Bay took advantage of the situation by scheduling a minor remodel of their own—but that remodel was supposed to be done on September 7, so by the time you read this they should be back to business as usual. I should also note that Erawan Thai, which lies just to the left of the construction fencing, has closed for good. Fortunately it is due to be replaced soon by “Hom Korean Kitchen.” My guess is that we’re talking about these guys, who have an existing restaurant in San Jose. If the pictures (and the menu) on their website are any indication, this could be a nice addition to our flourishing restaurant scene.

Moving on down the street, I poked my head into what used to be Goetz Bros. Sporting Goods, to see how the transformation of the space into both retail (in front) and offices was proceeding. As you can see, it is coming along nicely: 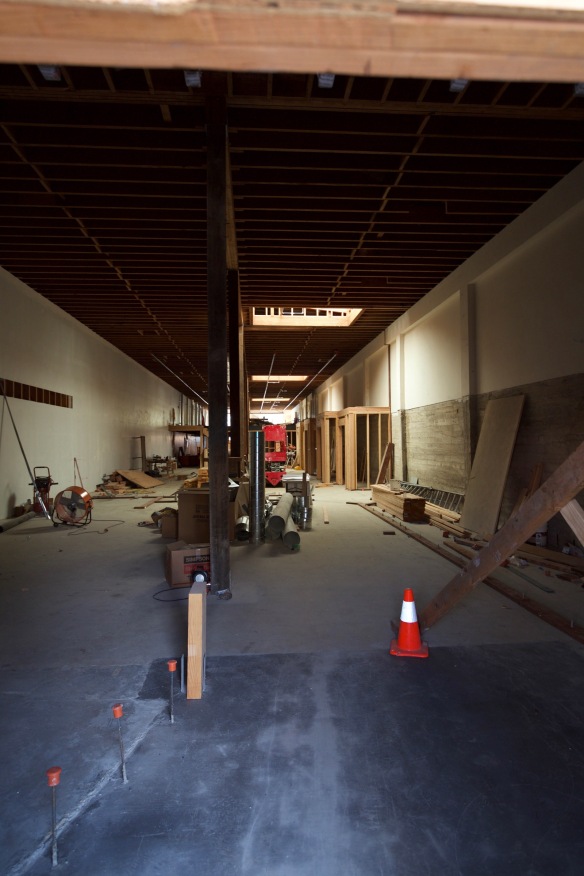 Last I heard, we might see a wine shop in the retail portion of this particular space.

Next door, the retail space that fronts the Avast offices is being built out as an ice cream shop. Naturally I had to take a peek and see how that project is going: 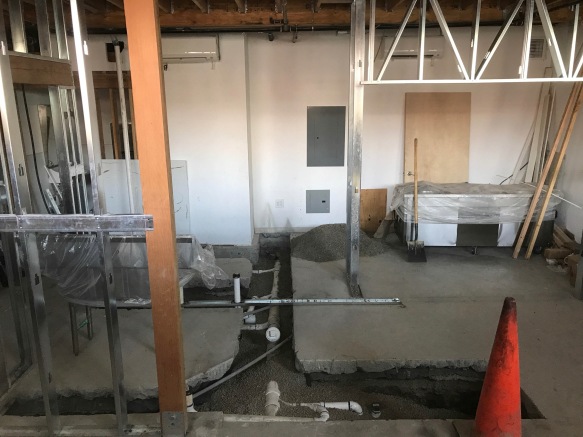 These street-facing retail spaces will go a long way towards turning this first block of Broadway (between El Camino Real and the railroad tracks) back into one that, on its face at least, is completely lined with shops and restaurants. This should attract more pedestrians and improve discovery for other businesses both on the block and in the immediate area, which will be great for Broadway and the city. Now if we could only do the same for Main Street! 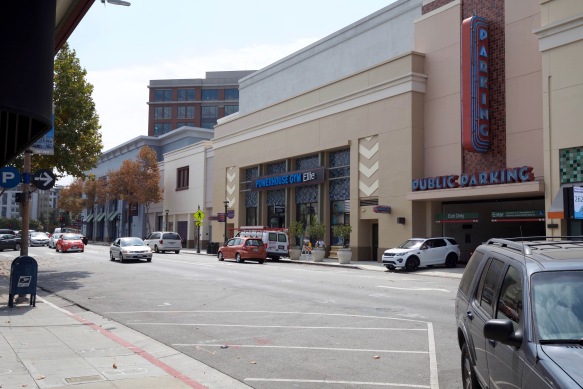 Powerhouse Gym has finally completed its move from its old location at the corner of Broadway and Jefferson to its new spot on the Jefferson Avenue side of the Century Theatres building. Now called “Powerhouse Gym Elite,” this looks to be a great place to take a fitness class or to just have a workout. I watched them moving the last of their equipment and perform some final touch-ups to the space. According to their signs they’ll open their new location on Monday, September 11.

Powerhouse Gym was the last of the tenants to leave their old location; expect construction fences to go up very soon around the former gym and the three smaller retail storefronts shown in this picture: 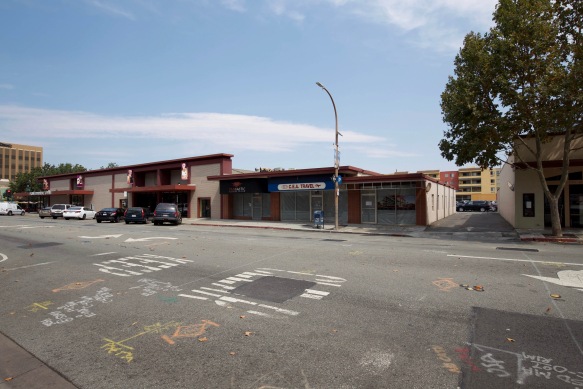 Demolition of this block of buildings will commence shortly after that, followed by excavation for the two-level underground garage that will sit beneath the four-story “Broadway Station” building that is to rise on this spot. Although the building is primarily offices—offices that are at least partially already spoken for by the Chan Zuckerberg Initiative—the ground floor and part of the second floor are designated for retail. The new building’s nearly 27,000 square feet of retail space, sitting on such a valuable corner, should prove attractive to one or more retailers. Hopefully it will not sit empty for long.

Incidentally, the Howie’s Artisan Pizza building (which is partially visible against the right edge of the above photo) will remain, but the restaurant won’t be reopening as Howie’s Pizza. The two gentlemen who have assumed the lease haven’t publicly announced the name or the type of their new restaurant, so I can’t yet say what type of food will be served there. But I can say, based on the fact that they’ve applied for their liquor license, that they do plan to open a restaurant. The applicant is listed as “Pasha, Inc.”; make of that what you will.

Lastly, near the beginning of my walk I checked in on the twelve-unit townhouse project being built at the corner of El Camino Real and Avondale Avenue (next to the former Mountain Mike’s Pizza building). Seeing a distinct lack of activity, and noticing that the signs that once advertised the project have been removed from the construction fences, I surmised that the project might be dead. However, the contractor has already done a fair amount of site preparation and utility work, which argues against this theory: 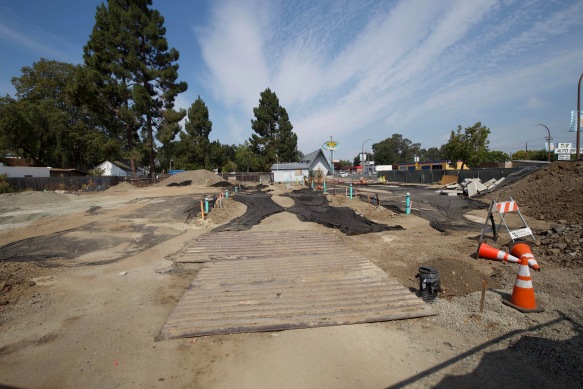 I checked with the city and was somewhat relieved to hear that the project is likely just experiencing a delay due to a “utility conflict.” Hopefully they can get that conflict resolved, and quickly get the project back on track. This particular lot has been empty for many years now (once, a Texaco gas station stood here), and I’m hoping that it won’t remain empty for much longer.

So: about that pay phone. I found it not too long before I took the picture at the start of this post. It is located on Edgewood Road, very close to El Camino Real, by the 76 gas station (across Edgewood from our Stacks restaurant). Although the wires connecting the phone to the pole appear to still be in place, when I picked up the receiver there was no dial tone: the phone doesn’t seem to be functional. But for now it remains. If your children have no idea how phones used to work, you might want to take them by and show them what modern technology looked like before cell phones became popular. It’ll blow their minds!

For those of you who are interested in ways to improve traffic around the Bay Area, and in particular those who are curious about the proposals to revive the old Dumbarton rail line, Friends of Caltrain is co-sponsoring a pair of community forums “providing context on the SamTrans ambitious program of proposals to improve mobility on the congested Dumbarton corridor.” The first forum takes place at 6:30 p.m. on Monday, September 11, in Menlo Park at the Belle Haven Senior Center; RSVP for that forum here. The second will be held right here in Redwood City, on September 27 starting at 7 p.m. The location is yet to be announced, but attendees are asked to RSVP: click here to do so.