Sometimes a widely accepted word usage just strikes me as odd. For instance, no matter how many times I see or hear the phrase “county seat” I immediately latch onto the word “seat” and wonder if there isn’t some better, more appropriate word. But the second definition for the word in Webster’s Dictionary is pretty clear:

The place occupied by anything, or where any person or thing is situated, resides, or abides; a site; an abode, a station; a post; a situation.

The New Oxford American Dictionary has this for “county seat”:

the town that is the governmental center of a county.

So there is no question that “county seat” is the right phrase for the town within a county in which that county’s affairs are primarily administered.

The County Center, which is the complex of buildings in which the County does much of its business, occupies two large parcels and a handful of smaller ones in Redwood City’s downtown. Together those parcels make up a contiguous chunk of land bounded by Marshall Street, Middlefield Road, Veterans Boulevard, Brewster Avenue, and Winslow Street. Then, add in the small block bounded by Bradford Street, Warren Street, Marshall Street, and Winslow Street: the parcel entirely occupied by the Maguire Correctional Facility, which most simply refer to as “the jail.”

If you haven’t had the good fortune to tour the jail (or the bad fortune to find yourself a guest there) and are curious as to what it is like inside, click on the above link. It will take you to a web page that contains, among other things, a link to a “virtual tour” of the facility. That “virtual tour” consists of a PowerPoint presentation that describes the operation of the facility in both words and pictures.

Getting back to the rest of the County Center, if you’ve ever reported for jury duty in Redwood City you’ve been to 400 County Center, the tall building that connects via aerial bridge to the Maguire Correctional Facility. 400 County Center is the Hall of Justice and Records building, which contains the Southern Branch of Superior Court. And it is where our jury room is, and the courtrooms in which the jury trials are held.

Next to the Hall of Justice Building is 455 County Center, the “County Office Building,” and 555 County Center, which is where most of us who have interacted with the county (other than as a juror) have been. For one thing it contains the office of Mark Church, our Assessor-County Clerk-Recorder and Chief Elections Officer, so it where you can register to vote or cast your ballot. You can also apply for a passport here. If you are a homeowner, 555 County Center is where you can go to pay or contest your property taxes. And, if you need access to county records (property maps, for instance), head on over to 555 County Center:

Which brings me, finally, to the main reason for this blog post. For some time now, the county has been planning a major revamp of the County Center complex. The first project has already broken ground, and a couple of other projects should get underway within the year.

First off, the county has begun work on a new Public Safety Regional Operations Center, on a lot at 501 Winslow (shown in the above photo, taken from the County Center’s multi-story parking garage). This lot used to house the county’s motor pool. The fifty vehicles that made up the motor pool were relocated some months ago, and the small building that served the pool was demolished. I’ve been watching the property sit mostly idle for some time now, but lately heavy equipment has moved in to tear up the remaining asphalt and begin prepping the site for construction.

The new Public Safety Regional Operations Center is where emergency calls—think 911—will be handled, and from which the requisite emergency services will be dispatched. The building will house an Emergency Operations Center and the Office of Emergency Services. Because it is intended to serve as a hub for public safety responders during major catastrophes, it will be constructed with redundant electrical, water, and other systems. And naturally it will be built to withstand major earthquakes. Here is a rendering of what the final center should look like: 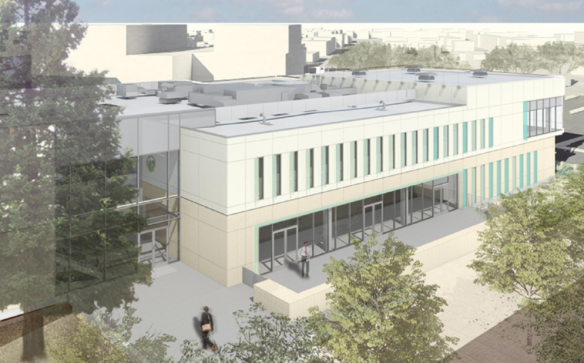 In case you were wondering, our current emergency dispatch center is located in the basement of the 400 County Center building—near to the jury room, apparently. If you’ve ever had to spend a day waiting in the windowless jury room waiting to be empaneled (or released from service),  consider what it must be like for the emergency dispatchers, who spend all of their working hours in a similar environment. That alone is justification for a new facility, in my book—but of course the new building will also be safer in an emergency and will employ the latest technology.

As I noted, construction of the new Public Safety Regional Operations Center is now underway. Apparently it is the first construction project on the County Center campus in over twenty-five years. It won’t be the last, however. There are two other major projects on the campus currently out for bid. First is an additional multi-story parking garage, to be located on the site of the existing parking lot adjacent to the County Center’s current garage, at the corner of Veterans Boulevard and Middlefield Road. This new garage will provide additional parking for county agencies, judicial facilities, potential jury members, county employees, and the general public while visiting the government center. It will also be wide open to the public at certain times (likely, nights and weekends to match the existing garage) in support of downtown Redwood City retail businesses and events. The garage is intended to have the capacity for between 850 and 1200 vehicles (the existing garage, which will remain, contains 797 spaces), and ideally will be completed by summer 2019.

The new garage will be a fairly large project, but because it is out on Veterans it won’t impact our downtown the way another project planned for the County Center will. This other project, which is also out for bid, will consume the entire block where the Lathrop House and the Traffic & Small Claims Court building stand today. The County plans to relocate the Lathrop House and then demolish the former First American Title Company building and the Lebsack building (both of which face Marshall Street), the traffic court, and rest of the buildings on that block. Once the block is clear, the county will construct a five-story County Office Building #3 and a surrounding plaza that will integrate the building with the others in the County Center. The county hopes that this additional office building will increase operational efficiency by consolidating various county departments that today occupy leased and/or aged facilities scattered throughout the county. Although a contractor has yet to be selected, the county somewhat optimistically hopes to begin work later this year, and complete the project by late 2020.

I mentioned that the historic Lathrop House (shown above) will need to be relocated in order for County Office Building #3 to be constructed. Before anyone gets too upset, be aware that the house has been moved at least once since it was constructed back in 1863. Originally it stood near where the Fox Theatre stands today. And as for its new location, it likely isn’t going far. In fact, the above photograph, which shows the Lathrop House, also shows its probable new location: just across Marshall Street in the parking lot behind the Historic Courthouse.

If a new Public Safety Regional Operations Center, a new parking garage, and a new office building aren’t enough, a year or so from now the county also hopes to perform a complete renovation of the Maguire Correctional Facility. That renovation would upgrade the building’s ability to withstand seismic activity and would result in a complete rework of the building’s interior and exterior. The project is still in the early planning stages, though, so don’t expect to see any activity there until late next year at the earliest.

Because Redwood City is the “seat” of San Mateo County, we’ve been the center of most governmental activity within the county for a very long time now. With that activity comes the requisite buildings, most of which are clustered in the so-called County Center near the heart of our downtown. Buildings age and need to be updated. As well, as the county’s needs change, which ultimately must be reflected in its buildings. Together these factors add up to what will likely be a lot of construction activity on the County Center campus over the next several years. Given how weary many Redwood City residents seem to be from all of the commercial construction we have been enduring over the last couple of years, this additional activity isn’t likely to be welcome news. However, it does seem necessary in order to keep our county government running smoothly and efficiently, which, hopefully, will in turn make all of our lives just a tiny bit better. Certainly it will ensure that we remain the “seat” of San Mateo County for many years to come.