I am always delighted to hear from you, my readers, and to see the little conversations that sometimes take place in your comments to my blog posts. Not every post generates many comments, but last week’s post is one that did. Among those comments were a couple of questions about various goings-on throughout the city. Although I addressed them briefly in my replies to the specific comments, I thought that for this week’s post it would be a good idea to expand upon my responses to three recent reader questions.

First off, reader “V john” asked about the recent activity at Red Morton Park. Although I’ve been aware for some time that three of the sports fields were getting new turf and that the four tennis courts were being redone (thanks to this press release from the city), I hadn’t been over there since well before the project began. This question, coupled with Monday’s relatively good weather, caused me to pick up my camera and walk over to the park to see what was up.

The answer to “what’s up at Red Morton Park?” is “quite a lot, actually!”. The first field I came to was surrounded by construction fencing, but I could see little going on other than that. The next one I came to—Griffin Field—was a regular hive of activity, however:

The old synthetic turf has been completely removed here, and the ground appears to be getting prepped for installation of a newer generation of synthetic turf. From the city’s press release:

The new turf infill is composed of thermoplastic elastomer (TPE), which is non-toxic and heavy metal free. TPE is also 100% recyclable and reusable, and remains cooler than other infill options during warm weather.

As for the tennis courts, since they are not turf but instead are made up of concrete (or asphalt), the work to replace them is a bit more strenuous. The old material has had to be jackhammered up before it can be hauled away:

Weather permitting, the city should soon be installing our new courts.

The next inquiry came from reader “davethetallguy”. He asked what was going on at Broadway and Winslow in Redwood City’s downtown area. I was tempted to answer off the top of my head, but I thought I should head over there and make sure I hadn’t missed something before answering. So, from Red Morton I wandered down Vera Avenue (where I saw some really interesting houses; more on those in a future post), jogged left when I hit El Camino Real, and then headed downtown by way of 103 Wilson—which is now being referred to as “Greystar II,” apparently. I had previously reported that the little blue house on this site was coming down, and indeed it is gone now. As well, the neighboring apartment building (on the corner of Franklin and Jefferson) that will be replaced by the 103 Wilson project is covered in scaffolding. Presumably this is to facilitate the recycling of the building.

On this block along Franklin there are now “No Parking” signs that extend all the way through 2017—the expected duration of this latest housing project. As well, the sidewalk on the south side of Jefferson from Franklin all the way to Middlefield Road will be closed for all of 2016, at least, due to construction.

Getting back on topic, when I reached the intersection of Broadway and Winslow I took some time to give the area a thorough look-see, in an effort to ensure that I didn’t miss anything. As far as I could tell, there was only one thing of note at that intersection: the bright yellow “limited entry” signs on the doors of Broadway Masala (a highly rated Indian restaurant), the storefront next door (into which Broadway Masala has been making plans to expand), and Flint, a mobile payments company that occupies the space directly upstairs. 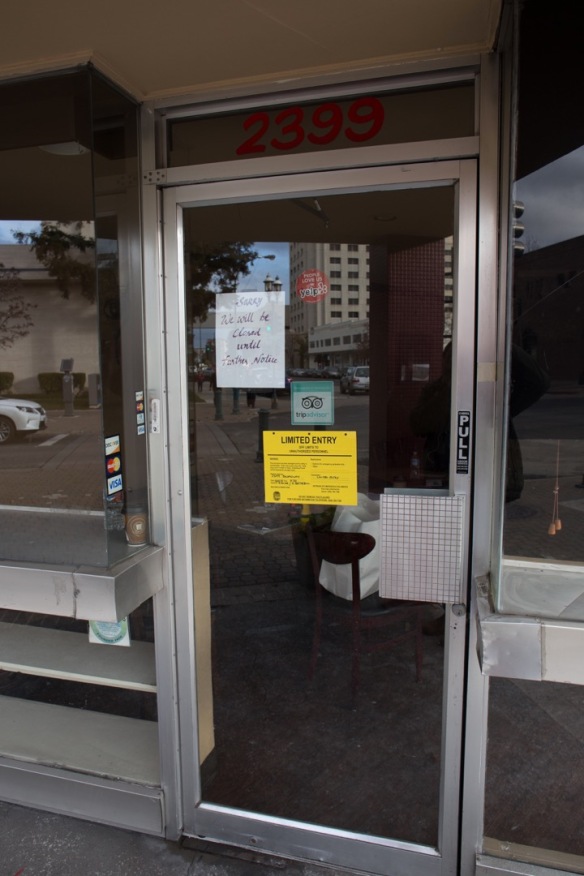 It seems that at 11:45 p.m. on December 22, Redwood City’s Fire Department was dispatched to this location to deal with a fire. There were no injuries, and the fire was put out within an hour. The cause is still being investigated.

As is typical in cases like this, the restaurant space will likely be uninhabitable for some time, while insurance claims are sorted and repairs and inspections are made. After looking carefully at the signs, it appears that Flint may be back in business sooner than Broadway Masala: their yellow sign says “Limited entry until utility restored.” The signs on the two restaurant spaces, on the other hand, simply say “Limited entry”—and both are accompanied by handwritten signs that say “Sorry. We will be closed until further notice.”

I take this to mean that once PG&E can safely restore power to the upstairs space, Flint will be back in business. I also assume that this means that the fire took place somewhere downstairs, and that the upstairs was not structurally compromised.

For their part, Broadway Masala intends to reopen. Indeed, it seems that they will take this opportunity to complete the expansion into the neighboring space, so that when they do reopen they will be bigger than ever. Keep an eye on them and, if you’ve enjoyed their food in the past, once they reopen be sure to give them some of your business. And if you like Indian food but haven’t yet given them a try, I highly recommend that you do.

When I first read davethetallguy’s question about what was going on at Broadway and Winslow, I thought for a moment that he was asking about the old Le Boulanger space. That sits one block down, however, on the corner of Broadway and Hamilton. Once I had satisfied myself with the goings-on at Broadway Masala, I walked down Broadway to Winslow, to see if there was any activity in the space that is soon to become our latest Starbucks. I’m certainly glad that I did! Although there is no noticeable activity going on at the site right now, I was able to reconfirm that it will indeed be a Starbucks. More importantly, though, was how I got that confirmation: from a liquor license posted on the door. A liquor license on a Starbucks, if you don’t already know, means that we aren’t getting just any old Starbucks, but one that will be serving the Starbucks Evenings menu.

As you might imagine, Starbucks, which primarily sells coffee and baked goods to with that coffee, is most popular in the mornings and afternoons. In the evenings, though, not so much. That is what Starbucks Evenings is meant to tackle. By serving wine and craft beer, plus “small plates”—such as chicken skewers, bacon-wrapped dates, various flatbreads, and macaroni in a “creamy truffle fondue”—Starbucks is hoping to draw people into a select number of their stores in the evenings as well. I’ve never experienced the Starbucks Evenings menu myself, but given this new location’s proximity to the Fox Theater (it’s just a couple of doors down) and Redwood City’s Courthouse Square, the location now makes sense. I’m kind-of looking forward to their opening, and am very curious to see how well they do in this spot.

Around the corner from the Starbucks I checked in on the 815 Hamilton office project (which will be located directly behind the Fox Theatre). Work continues apace, but there is little of interest to report at this time. I also looked in on the five-story apartment building that is nearing completion at the corner of Winslow and Brewster, and the 18-unit “Classics at Centennial Place” condominium complex being built at the corner of Brewster and Warren. Both are structurally complete and are receiving their outer skins; expect to see both accepting new residents sometime in the spring.

Once again getting back to reader questions, the third was more of a personal one: I was asked whether or not I would be interested in having someone tag along on one of my walks. I replied to that reader individually, but indeed that is something that I have been thinking about for some time now. While considering what else I should be doing with this blog, it has occurred to me that with a title like “Walking Redwood City” it is probably only natural for me to host a group walk now and then. The more I think about it, the more it makes sense, both as a way to further educate us all, and as a way to develop a closer relationship with my readers.

So I’m turning this one back around to you, my readers. Would you be interested in going along on a group walk around our city? It would have to be on a weekend, I’m thinking, and would probably be somewhere in the range of 2-5 miles long, depending upon the walk. If we did such a thing, where would you like to go? Right off the top of my head, I can think of a couple:

We’d have to wait for better weather, of course. So what do you think? Is this something you would be interested in? If so, where would you like to go? Let me know in the comments.

There has been a recent uptick in readership of my blog, and an increase in the number of followers. For this, I have some of you to thank: this blog has grown, and continues to grow, solely by word-of-mouth. If you like what you read, give it a “Like” on Facebook, on WordPress, and/or on Twitter. And continue to share it with your friends! Help me spread the word about all of the goings-on here in Redwood City.

20 thoughts on “Ask And Ye Shall Receive”