Last week I mentioned that Broadway Masala and its upstairs neighbor, Flint, were temporarily closed due to an apparent fire in the Indian restaurant. While those two businesses had official “Limited Entry” signs on their doors that had attracted my attention, what I missed was that their next-door-neighbor, Aili Ice Designs, had also been affected by the fire. Although they don’t seem to have been officially closed by the Redwood City Fire Department, as both Broadway Masala and Flint were, due to smoke damage Aili Ice Designs has closed their Broadway Street storefront until they can get things cleaned up. Fortunately they have a solid online presence and an alternate location where they can temporarily craft their designs. Thus, they continue to do business both online and via phone. Ali Ice Designs is another small Redwood City business that we should support through this trying time: if you have need of floral arrangements or custom organic sculptures, do check them out! Their website is http://www.ailiicedesigns.com, or they can be reached at (650) 299-1211.

The response to my proposed group walk has been overwhelming! Its clear that a number of you want to tag along on one of my walks, so I’ll keep and eye on the weather and once things get a bit more stable I’ll notify all of you as to when and where we’ll be meeting. I’ll try to give you plenty of warning so that those of you who are interested can get it on your calendars. And if you find you can’t make the first one, don’t despair: given the response I suspect that I’ll be doing more than one of these. From looking at the comments it is abundantly clear that people want to do the Maple Street/Docktown/Bair Island walk, so that’s what I plan to organize for our first outing. I’ll measure out the walk and figure out a good meeting spot (with sufficient parking); the details will be in my announcement so you’ll know what you are getting into.

Although there was little of general interest on last Monday’s City Council meeting agenda, I did watch the meeting online. I was curious to see how our new mayor and the new council members would acquit themselves. Perhaps not surprisingly, the meeting went pretty smoothly. It wouldn’t surprise me if the meeting’s somewhat routine agenda items were chosen specifically to allow the council to get settled in without having to confront any controversial issues.

There is always something that catches my eye, however, and this meeting was no exception. Before the public meeting the City Council met in closed session to meet with legal council on a labor relations matter (which is surely of interest to some, but not to me) and to negotiate on the sale of one property and the purchase of another. These property transactions are very much of interest to me, although the fact that they were being dealt with in closed session, with no publicly reportable action resulting, implies that neither transaction is yet finalized. As for the properties involved, the sale is of the Chase Bank property at 2300 Broadway, just across Hamilton Street from Courthouse Square. Apparently the city owns this property; I hadn’t known that. The purchase is for this small apartment building at 780 Bradford Street: 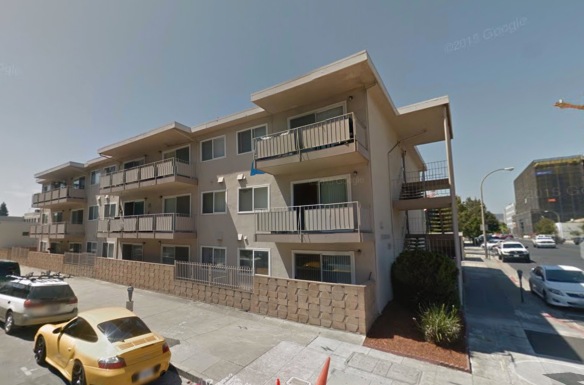 This building is located at 780 Bradford Street, and sits at the corner of Bradford and Main. It is next door to the Redwood City School District offices, and across the street from the nearly complete 188-unit apartment building at 601 Main. It is also directly across Bradford Street from the city-owned property upon which the city is working towards a significant low-income housing project. Apparently the city hopes to buy the 780 Bradford apartment building and either keep it as is or use it for low-income housing.

I’ll keep an eye on both of these properties, and will write about them in a future post if anything of interest transpires.

On the regular City Council meeting agenda, the one thing that caught my eye was the rather innocuous sounding Sidewalk Easement Deeds granted by Ricky Hung Ngo and Yung Le for the properties at 353 and 355 Alameda De Las Pulgas. I’ve written about the two houses being built on these two properties before; the basic item, which grants a driveway easement across the sidewalk for each of the two houses, isn’t worth noting. What did pique my interest is the fact that although these properties are clearly within the city boundaries, there is currently no sidewalk along this block-long stretch.

I often walk this section of Alameda de las Pulgas, heading back and forth between my home and Jefferson Plaza or the Woodside Road area. It has always bothered me that, coming north past Jefferson, when you cross Harding Avenue the sidewalk just stops:

From this point up to the Hetch-Hetchy right-of-way there is no sidewalk. Pedestrians are forced to walk on the dirt median, avoiding the handful of cars that are often parked there.

Redwood City normally requires sidewalks along streets within the city limits. A disappearing sidewalk is often what signals that you have crossed over into unincorporated San Mateo County. But not always: there are some sidewalks on unincorporated land, and as you can see here, there are some rare areas within the city limits where there are no sidewalks. Some time ago I did some research on this particular block and discovered that the lack of sidewalks here is a long-standing issue that was tabled until these two empty properties were developed. The nine property owners along this block are responsible for the cost of the sidewalk, and understandably they want to put it off as long as they can. But the development of these two properties is the trigger that should finally cause the missing section of sidewalk to finally get filled in. It may take as many as five more years, although I hope that it doesn’t take nearly that long.

Of course, just because a block has a sidewalk doesn’t make it friendly to pedestrians. For instance, there is this stretch of sidewalk further up along Alameda: 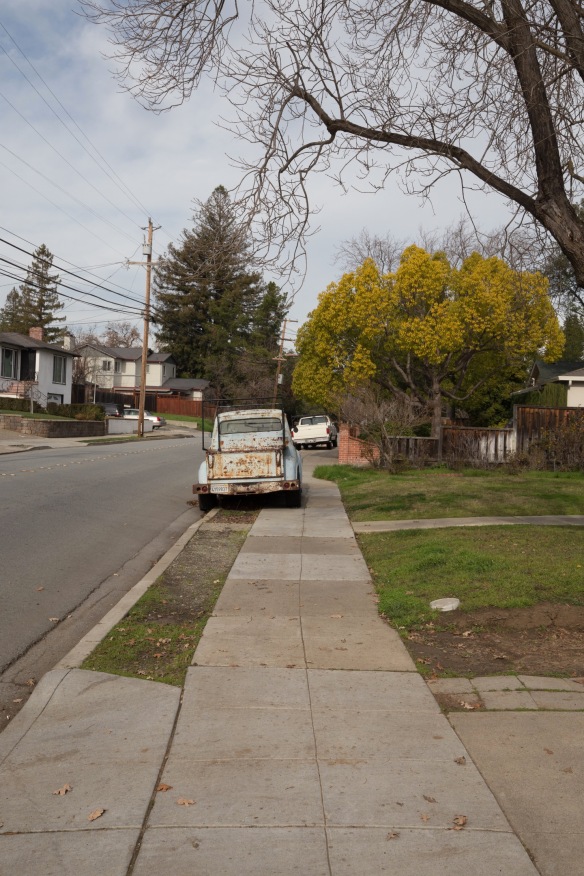 While I get that the two owners of these trucks want to keep them as far off Alameda as possible, from a pedestrian point of view they’ve gone way too far. I’m pretty sure that blocking the sidewalk this way is illegal, but given that this has been going on for some time now, it doesn’t appear that the city cares all that much.

As you can imagine, I spend a lot of time on Redwood City’s sidewalks, and have become intimately familiar with them. Most are in really good shape. Sidewalk maintenance is the responsibility of the property owner, and most seem to be doing well. Being a homeowner myself, I can sympathize with others who see the need to keep their portion of the sidewalk safe, but want to keep the costs down. This often results in fixes that, while functional, are less than ideal from an aesthetic standpoint: 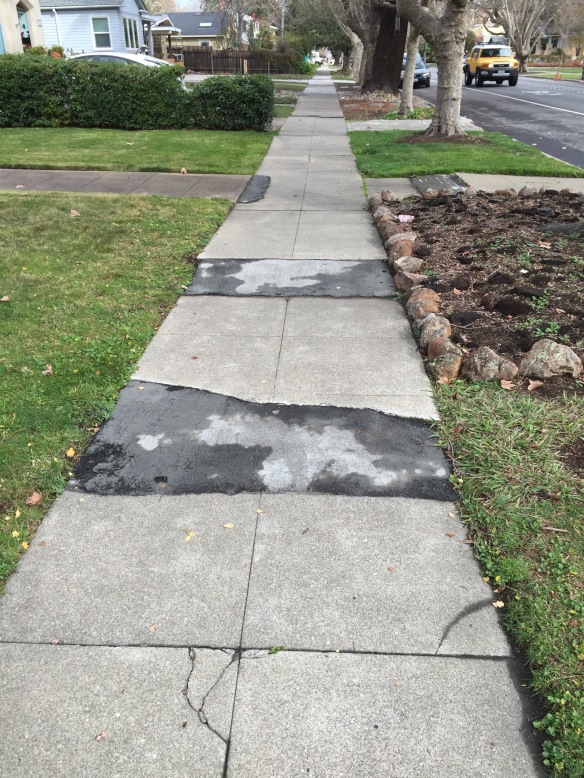 Although I have yet to take advantage of it, Redwood City’s 50/50 Cost Share Sidewalk Repair Program seems like a great way to make significant sidewalk repairs for half the cost.

Sidewalk problems are often the result of tree roots. I enjoy seeing how people deal with this particular issue. If possible, dodging them can be a great way to go: 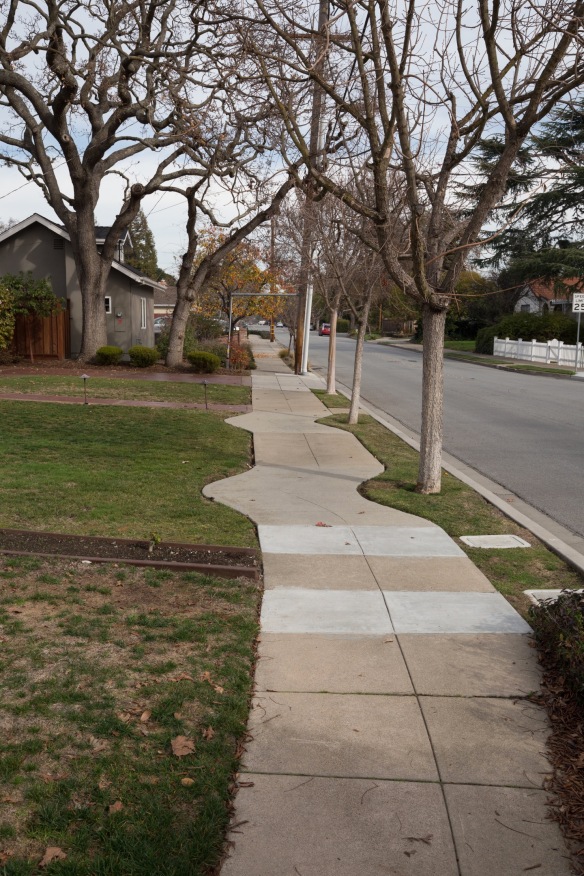 Not everyone has the space to be able to do this, however. So another solution, which seems to be common in the Mount Carmel neighborhood, at least, is to use a flexible, rubber-like sidewalk material that actually stretches over the tree roots. It looks remarkably like concrete, but you know it when you walk on it: the extra bounce you get from the flexible material is quite noticeable. While I don’t know exactly which material various homeowners are using, an Internet search turned up a couple. For instance, I found Rubberway® Sidewalks. According to their website, not only is their material flexible, it is porous as well: air, water, and nutrients are able to penetrate the sidewalk material to nourish the roots below. They say that this encourages deep rooting of trees, which reduces sidewalk heave and cracking. This flexible sidewalk stuff seems to be popular, at least in our area: on my walks I’m encountering more and more sections of sidewalk that use it.

While I’m usually on sidewalks for most of my walks, those of you who join me on the walk to Bair Island will discover that from the Kmart to and through Docktown, we’ll be walking in the median—there are no sidewalks at all, other than a very narrow one on the bridge over Highway 101. Fortunately, there is little traffic through there, and visibility is good, so the route is pretty safe. Once the Inner Harbor area is developed, things should improve greatly: one of the big concerns to be addressed by that project is how to get people to and from the area, regardless of whether they are in a car, on a bike, or on foot.

I have to say, especially after all the walking I’ve done in Emerald Hills where there are almost no sidewalks, Redwood City’s sidewalks are really good. That isn’t to say that Redwood City is an ideal place to walk—there is still quite a bit that the city could do to make it more walkable, but having good sidewalks is a great start. After that, well, I’m looking to our Complete Streets Advisory Committee to take walkability (and “bike-ability”) to the next level in Redwood City.

At the end of this week’s City Council meeting our City Manager highlighted a couple of upcoming meetings that will be of interest to many Redwood City residents. The city will be publicizing these meetings in various ways, but since the subjects are the kind of thing that many of my readers will be interested in, I thought I should mention them here. If any of these are of interest to you, be sure to put them on your calendar!

18 thoughts on “Where the Sidewalk Ends”