During a break in last week’s weather I was walking over by Kohl’s Plaza and decided to explore Price Avenue (which parallels Veterans Boulevard, running from the DMV up to Convention Way by the Lexus and Land Rover dealers). I hadn’t been down that street in some time and wanted to see if anything was new. Nothing jumped out at me until I got close to the Lexus dealer, which is when I saw this place:

As someone with an extensive background in tech, I regularly follow the tech press. And Theranos, along with its founder/CEO—a young woman named Elizabeth Holmes—has been getting a lot of press lately, not all good. Theranos is developing technology and techniques to process a wide range of blood tests using only a small sample of blood—as little as a single drop obtained from a finger prick. The goal is a laudable one, and I, who have a strong dislike of hypodermic needles, would love to eliminate the blood draw from my annual physical. Unfortunately there seems to be some question as to the accuracy and repeatability of Thermos’s test results. I for one will be sticking with the old tried-and-true methods until their equipment and techniques have been solidly proven.

Theranos is based in Palo Alto, but they have a small number of dedicated “Wellness Centers” in the area in addition to those inside some Walgreens stores. A dedicated center is what you’ll find at 570 Price Avenue in Redwood City.

Seeing Theranos got me thinking about other technology companies in Redwood City. Our location within the Bay Area—being almost exactly halfway between San Francisco and San Jose—puts us in an ideal location for both technology workers and technology companies. And while Redwood City isn’t the first place that people think of when they think of high-tech companies in the Bay Area, perhaps it should be. After all, we certainly have more than our fair share. I scratched together a list (which is by no means complete!) and this week set out on a series of walks to visit some of the more interesting ones.

Everyone knows Box, of course; these days they are rather hard to miss. If you drive 101 through Redwood City you’ve undoubtedly noticed Evernote, whose headquarters sit just to the west of the freeway, midway between the Whipple Avenue and Woodside Road exits (just look for their logo: the head of an elephant). And then there is Oracle. People sometimes forget about them. Not because they aren’t visible, of course. It’s rather hard to miss the shiny glass cylinders that make up their headquarters near the intersection of Highway 101 and Marine Parkway. No, it’s just that their location, being at the northernmost tip of Redwood Shores, causes people to think that perhaps Oracle is located in Belmont. But indeed they are not: their corporate campus is located entirely within Redwood City’s borders. 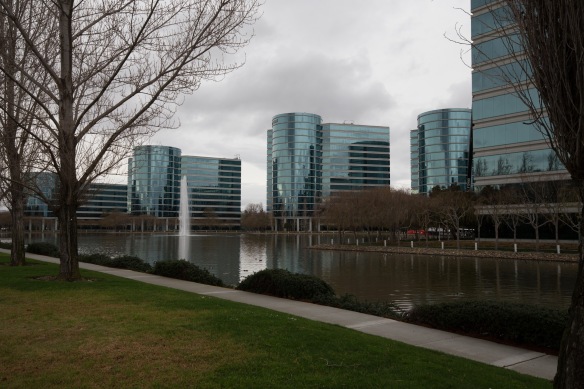 Other big technology companies that are headquartered within Redwood City include Electronic Arts (they make video games), Informatica (software for building and maintaining enterprise-wide data warehouses), Pebble (smart watches), NexTag (online price comparison service), WePay (an online payment service provider), and YuMe (advertising for digital video). If you count companies that apply your digital photos to coffee mugs, t-shirts, and photo books, you can also count Shutterfly and Picabo, which you’ll find in Redwood Shores, and Zazzle, which is located out at the end of Seaport Boulevard, in the Pacific Shores development.

Tech companies come and go, of course, and we’ve had our share of those as well. A couple of well-known ones come to mind. First and foremost—for me at least—is NeXT Inc. The reason that NeXT comes immediately to mind is because I had the good fortune to work there from early 1994 up to their sale to Apple in 1997 (I then went on to Apple, as did most NeXT employees). If you aren’t familiar with NeXT, it is the company that Steve Jobs founded after he was ejected from Apple by John Sculley and Apple’s board of directors. The original plan was to make computers for the educational market, but the computers that NeXT developed turned out to be too expensive. After attempting to find other markets for his black magnesium-cased workstations, Steve Jobs did what is now referred to as a “pivot” and changed the company’s direction from a maker of computers to a maker of operating system software for PCs and workstations. The NeXTStep operating system found some success, but the company never really got on a solid footing. I joined the company after the hardware part of the business had been ejected, and was delighted to see that although the company no longer made hardware, there was enough of it lying around that everyone in the company used it.

NeXT began in 1985 in Palo Alto, but moved to Redwood City just four years later, in 1989. From that time until shortly after the sale to Apple, we were located in two adjacent buildings on Chesapeake Drive, about two blocks off of Seaport Boulevard:

For me, the location was ideal: not only was the company close enough to my home that I could on occasion ride my bike to work, but also our location on the water just across from the Sequoia Yacht Club meant that our views were fantastic. I walked a lot even then, so I spent my lunch hours exploring the area. I walked out to Pacific Shores, to Malibu Grand Prix and the miniature golf course, and to Docktown. As well, I thoroughly explored the Port of Redwood City: I watched the cargo ships loading and unloading, and discovered the rail spur where various individuals kept private rail cars. The only problem with being out there was the severe lack of places to eat: we had Charley Brown’s, a small deli, and an upscale restaurant at the port that wasn’t the type of place I would patronize for a workaday lunch. But that just encouraged me to bring a home-made lunch, which wasn’t a bad thing.

While walking the tree-lined streets around Next’s offices, I discovered that less than a block from us was the headquarters of 3DO, a well-known (at the time) designer of a cutting-edge home video game console. 3DO was founded in 1991 by Trip Hawkins, who had previously founded Electronic Arts. Until 2003, when they finally closed their doors, 3DO was located at 100 Cardinal Way in Redwood City.

Not too long after I was shifted to Apple headquarters in Cupertino, another well-known company moved into new digs out at the end of Seaport, in Pacific Shores. In 1995 a little company at the forefront of computer-animated video named Pacific Data Images, or PDI, moved into the mainstream when they began work on a little movie called Antz. They made the movie in collaboration with Dreamworks SKG, who had purchased a minority interest in the company. Following the successful release of Antz, in 2000 Dreamworks decided to buy the remainder of PDI, thereby creating PDI/Dreamworks. In 2002, PDI/Dreamworks moved from Palo Alto—where they had been toiling away in a small brick building between the Fry’s Electronics and the railroad tracks—to Pacific Shores. There, they had room to grow, and grow they did—to the point where they outgrew their original building and had to move to a larger one within the Pacific Shores complex:

While in Pacific Shores they went on to complete PDI’s next effort, a small film called Shrek—which solidly put the feature animation division of Dreamworks on the map as a major player in the business of making computer-animated feature films. PDI/Dreamworks remained in Redwood City churning out a string of hit films until last year: in January of 2015 as part of a large restructuring Dreamworks eliminated the PDI/Dreamworks operation and closed its Redwood City offices.

When talking about storied technology companies in Redwood City, I cannot omit the granddaddy of them all, Ampex Corporation.

Although you may not be familiar with Ampex, you’ve likely seen their sign countless times: it is located just off 101, a short distance south of Woodside Road. Ampex was founded back in 1944, in San Carlos at the corner of Laurel and Howard (where the Curves is today, just across Laurel Street from White Oak Flower Shoppe). They moved to Redwood City in the early 1950s. Although founded to make electric motors and generators, they were one of the first US companies to make magnetic tape recorders, and those are what made the Ampex name famous. Not a household one, though; although Ampex did make some tape recorders for home use, they were really known for their professional multi-track audio, video, and data recorders. Among many other things Ampex is credited for having invented the first practical video tape recorder.

Ampex has been located in Redwood City for some sixty-five years now. Not a long time in the eyes of a historian, perhaps, but a very long time in the history of modern technology. Although they no longer make audio and video recording equipment, Ampex still exists today, as Ampex Data Systems. Their sign marks the current location of their global headquarters, at 500 Broadway in Redwood City. Unfortunately, their headquarters and sign are located on property that is slated to become the “Stanford in Redwood City” campus. Thus, we may well lose one of Redwood City’s storied companies. And Stanford doesn’t appear to have many sentimental feelings towards the Ampex sign; I for one think that given its significance in the history of technology, the sign deserves to be landmarked and preserved. After all, if the city can preserve the Mel’s Bowl sign (see it today at the Redwood City Car Wash on El Camino Real just north of Whipple Avenue), they should be able to preserve the Ampex sign. We just need to find a good home for it…

Some may think of Redwood City as just another sleepy little bedroom community near Silicon Valley, but I think that anyone who really takes a look will quickly come to realize that Redwood City is actually a vital part of Silicon Valley: a place that has quietly played a significant role in the transformation of the Bay Area from an agricultural (and logging!) center to the center of the technology world. And for those tech employees lucky enough to both live and work in Redwood City—as I once did—why, it’s paradise!

7 thoughts on “From Trees to Tech”