Last Thursday (December 10, 2015) I was over in the neighborhood of the old Pete’s Harbor when I noticed a bunch of people heading back from the observation platform at the northeast end of the Bair Island trail. Obviously some sort of event was going on, and I later learned that the levees separating Inner Bair Island from the San Francisco Bay had just been breached.

Bair Island, which at approximately 3,000 acres may well be the largest undeveloped island in the bay, is actually divided into three parts. Outer Bair Island, which is closest to the center of the bay, is separated from Middle Bair Island by Corkscrew Slough. Middle Bair Island is in turn separated from Inner Bair Island by Smith Slough. Inner Bair Island rests up against Highway 101, and is the only one accessible by foot. Thus, it is the part of the island with which we Redwood City residents are most familiar. At one time Bair Island was a single large body: in the 1920s Fred Bair, from whom the island received its name, had a home and raised cattle on the land. But the Leslie Salt Company, who acquired Bair Island in the 1940s, built levees that divided the island into its current three parts.

The company also built other levees. In particular, they built levees that prevented Inner Bair Island’s historic slough channel from connecting to the bay. This not very recent image from Google Earth shows Inner Bair Island and its historic slough channel: note the brown color of the channel water as compared to the green color of the water in Smith Slough:

In the above photo you can see that the channel is prevented from connecting to the slough—and thus to the bay—by dikes at either end. It was these dikes that were breached last Thursday.

Now that the bay waters are once again free to flow along the channel, Inner Bair Island will slowly return to its natural state and come back alive. Those of us who live in the area can once again enjoy both the island and the many birds who stop there during their spring and fall migrations. Today, although the South Bayside System Authority continues to work on their 48-inch pressurized sewer pipe, you’ll otherwise find it a peaceful place where birds are happily strutting and swimming and making a meal of the aquatic life that is now flooding parts of the island that have been dry for many years now.

Bair Island is part of the Don Edwards San Francisco Bay National Wildlife Refuge; some 1,400 acres worth have been restored by the U.S. Fish and Wildlife Service. At one time this badly needed tidal marsh was slated for development: back in 1982 Redwood City’s City Council had given initial approval to a plan that would have seen some 15,000 people living and working there. Fortunately for us, a number of concerned citizens spearheaded by Ralph Nobles and his wife Carolyn fought for a referendum to stop the project. The referendum, which passed by a mere 44 votes, put an end to that initial proposal. Over the years other proposals came forth, but one by one they were defeated until the final owner, the Japanese multinational Kumagai Gumi, was persuaded to sell Bair Island to the Peninsula Open Space Trust for some $15 million. POST subsequently turned the island over to the government, who manages it today.

Bair Island is a wonderful place to take a walk. While I believe that the plan is to make the trail originating from the Bair Island Road bridge back into a one-mile loop, today you can either take the trail to the right for 0.3 miles to the near observation deck, or you can head left on a 1.7 mile trail that heads towards and then along 101 to the San Carlos Airport, where it currently ends close to the south end of the runway. If you like watching planes land, this can be a great spot to hang out:

For either of these walks—which are completely flat and therefore pretty easy—you can either walk to the bridge, as I did, or you can drive to it. I walked down there the other day, and as I’ve said before it is not a walk for the faint of heart. My path took me down Whipple Avenue towards 101. Staying on the south side of Whipple, walk as if you were going to get onto 101 southbound. Head down the ramp just a short distance and you’ll see a crosswalk that takes you across the ramp. This is a tricky crossing as you have no signal to protect you. In addition, cars heading down the ramp are moving at a good clip, and are not expecting to see a pedestrian crossing their two traffic lanes. But there is a marked crosswalk; use it and be patient, waiting for a large enough gap to allow you to safely cross (it helps if you aren’t trying to navigate this crossing during commute hours). You will then find yourself on a secluded sidewalk that takes you across 101, where you will again be confronted by a crosswalk that guides you across the two lanes of traffic trying to get on 101 northbound. Again, be very patient and wait for a large enough gap in the traffic. The situation here is identical to the one you just navigated: while there is a painted crosswalk, cars are not expecting to see pedestrians here and are in fact accelerating as they anticipate getting on the freeway.

Having successfully navigated the two Highway 101 onramps, you then cross the exit ramp (for northbound 101 traffic getting off at Whipple). This is easy, however, since here there is a pedestrian crossing signal. Walk a short distance, where you’ll find that you have one final hurdle to surmount: crossing East Bayshore Road (which is what Whipple becomes on the Bay side of the 101 interchange). Although you will find a button to indicate that you want to cross, as far as I can tell the warning lights to which it is connected don’t actually work. So treat this crossing as unprotected, and again wait patiently for a suitable interval in which to cross. This is a bit tricky given that the visibility is limited in both directions; use your ears as well as your eyes to watch for traffic.

Once you’ve made it to the Bay side of East Bayshore Road, you are home free. Approach the construction gates (which are likely to be open) that you see straight ahead. To your right you’ll see a paved trail that heads towards the Bair Island Road bridge and the observation deck. Look left and you’ll see the continuation of that paved trail; this one hugs 101 and heads towards the airport.

Hopefully I’ve scared you sufficiently so that you’ll elect to drive to Bair Island instead of walk. (If you still insist on walking, I would highly recommend using the Maple Street over-crossing to get over 101. Then, follow Maple ahead and to the left until you reach the entrance to Docktown. Go through Docktown, and then cross the “bridge to nowhere” over Redwood Creek. This will lead you to the East Bayshore Road roundabout. Stay to the right and head down Bair Island Road until you get to the bridge.) In a car, you have two options. If you are interested in the northern, airport end of the island, drive to Holly Street and follow it east until you get to the entrance to the San Carlos Airport. Turn into the airport, and then make the first right turn, on Skyway Road. Follow it to the very end, and you’ll see a very small parking lot for those wanting to use the trail: 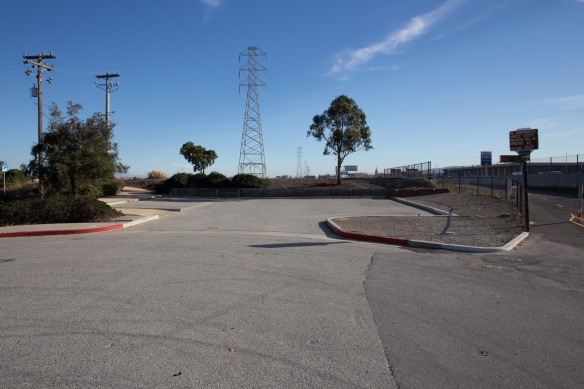 Park in the small square lot, and either head left on the tan “fines” to get to the end of the runway, or head down the paved bike/pedestrian path (at the right in the above picture, with the yellow dashed line down the center) to follow 101 and eventually reach the southern part of the island.

Most of you, however, will prefer the other option, which is to park close to the Bair Island Road bridge. Simply head over 101 on Whipple Avenue and follow the road to the roundabout. Continue beyond the roundabout and follow the road as it makes a 90-degree left turn. Shortly after the turn, you’ll see the sign for the Don Edwards Wildlife Refuge; turn in here and park. 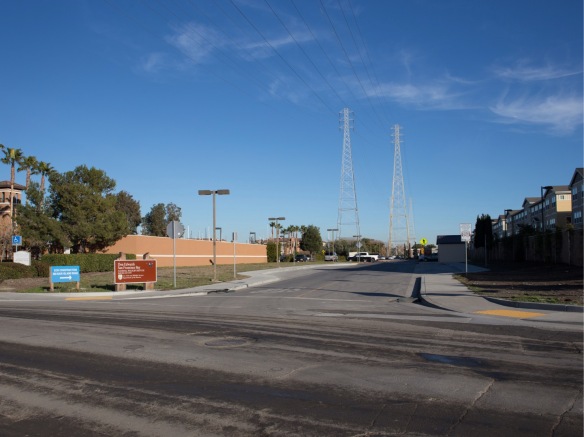 Walk back out to Bair Island Road and cross over; you’ll see the bridge on your right. There is a gate, but have no fear: it is unlocked.

On my walk the other day I navigated the tricky Whipple Avenue crossing, and then walked north to the airport end of the island. I then headed back south; when I reached Whipple I continued on the trail, walking to and then past the Bair Island Road bridge. Upon reaching the observation deck, I sat for a while. The deck is a very calming place. The noise from the highway is muted at this distance, and you are free to see and hear the small wildlife that is returning to the area. From there you also get a great view of the Blu Harbor (formerly Pete’s Harbor) project, as well as the Port of Redwood City:

I can highly recommend this observation deck as a place to sit and be at peace. This is one of the great things about Bair Island. It may not beautiful in the classical sense, since there are no majestic trees or waterfalls, no canyons or mountain vistas. But there is a serenity about the place, and a simple beauty that is revealed when you take the time to really absorb your surroundings. Obviously, I highly recommend the trip.

After my time on the island it was late enough that I knew that navigating Whipple would be tough, so I headed back along Bair Island Road to the roundabout. There I took some pictures of the under-construction Courtyard by Marriott hotel, and then headed south over the “bridge to nowhere”. I then traversed Docktown and followed Maple out to where the Maple Street Correctional Center is rapidly nearing completion. I again took some pictures, and then crossed over 101 and headed home. In all, my walk was just shy of 8 miles. It was a nice bit of exercise on a “Climate Best” winter day here in Redwood City. And I arrived home tired, but at peace.

In my post Good Fences Make Good Neighbors I mentioned a newly rebuilt house near me with a fancy wooden fence that looked more like cabinetry than fence work. That house is now complete, and was open for viewing last weekend. 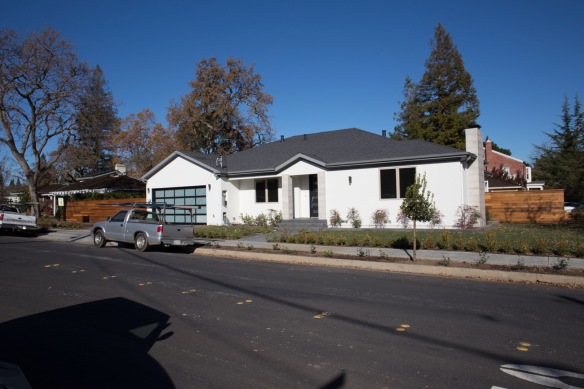 I have yet to tour it, but this house a 99 Nevada Street is listed online. As an example of just how crazy housing is here in Redwood City, I thought I’d give the pertinent info: 4 bedrooms 3 bathrooms, 2,500 square feet of house on an 8,700 square foot corner lot. The asking price? $2.4 million. And given our current climate they are likely to get it… If you are curious, check out the listing for photos and more information, or drop by an open house and see it for yourself.