With all of the construction-related disruption we are experiencing in Redwood City these days, it’s easy to feel as if we are unique among peninsula cities, and that we are being singled out for punishment of some sort. Of course, if you read the papers or just think about it for a moment you’ll realize that we are not alone: other cities—in particular other peninsula cities—are going through a lot of what we are going through right now. Why, just take a look at our neighbor to the north: San Carlos. Although San Carlos has been relatively quiet until now, development-wise, that is about to change in a big way. Although they aren’t getting 10-story office buildings, they are getting major housing developments, office buildings, and hotels that will undoubtedly disrupt life throughout the city. I recently took a walk to and through San Carlos to see for myself just what is going on, and how the town will likely be affected by the upcoming construction.

Not all of their projects are huge, of course. I’m a fan of Johnston’s Saltbox restaurant (at the corner of Laurel Street and Saint Francis Way in San Carlos), and have been watching one nearby development with some disbelief. Given its height relative to its neighbors, I can only shake my head and wonder how this got approved:

It really sticks out, doesn’t it? If it was just one story shorter it would blend in a lot better, but likely then the development wouldn’t have been economically viable. On the plus side, other than visually this small project doesn’t seem to have caused much in the way of disruption. But San Carlos has three large projects that are about to get underway, at least two of which will likely give San Carlos residents major headaches over the next couple of years.

First up, Wheeler Plaza. This is a project that has been in the works for a very long time: it was initially conceived some twenty years ago. Basically, this project involves constructing a large condominium complex on the municipal parking lot behind the old Foodville market. In the process, a great deal of the retail establishments that face San Carlos Avenue on that block are being wiped out (the new complex will have ground floor retail on San Carlos Avenue, but the existing businesses cannot remain during construction). Another casualty of this project is a small six-unit apartment building that currently sits on the back part of the property: 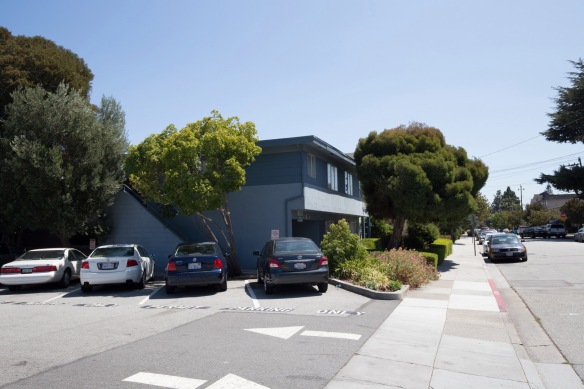 The above apartment building will be torn down, the parking lot will be torn up, and, except for the building on the corner of San Carlos Avenue and Laurel Street that houses Blue Line Pizza, all of the buildings on that block that front onto San Carlos Avenue will be flattened. As for the ones that front onto Laurel Avenue, although they are not part of this project I’ve heard that an unrelated developer has snapped up a number of them. In particular, the building housing Plantation Coffee Roastery through Taqueria Mi Ranchito, and the adjoining one containing The Laurel Leaf appear slated for some sort of redevelopment.

When I took my walk I paid particular attention to the businesses along San Carlos Avenue. The hair salon was gone, Hole in One Liquors had just had their final day of business, and Coffee Aroma was in the process of shutting down. By now I wouldn’t be surprised if the remaining businesses have closed their doors as well. I assume that the city will keep the Adult Community Center (which has been occupying an otherwise empty storefront on San Carlos Avenue for a while now) open for as long as they can, but once demolition gets underway—the groundbreaking should take place in early 2016—the Center will have to move. Then, once the buildings have been torn down, the residents of San Carlos will get to experience what we’ve been enjoying throughout our downtown: the digging of a large underground parking garage.

Above the two-story above-ground garage, which will be fronted with 9,800 square feet of retail on the San Carlos Avenue side, will sit three levels of condominiums, resulting in a five-story building that will occupy the majority of the block. The ground-level retail is double-height, and the top floor is stepped back, so the building gives the illusion of not being quite so tall:

For those of us interested in affordable housing, the Wheeler Plaza building does not appear to have any below-market-rate units. However, the city is hoping to follow up this project with another that would replace a second six-unit apartment building on this same block (at the corner of Walnut Street and Cherry Street) and a small optometrist’s building (on Cherry Street) with a 31-unit apartment building that would consist “predominantly” of below-market-rate apartments. However, although this second project was included in the Environmental Impact Report for Wheeler Plaza, it does not appear that the city has yet gotten all its ducks in a row in order to make it happen.

To partially make up for the loss of parking while the Wheeler Plaza project is underway, the city of San Carlos is thinking about tearing down the Foodville building (which it owns) and offering valet parking on the property during construction. (This won’t entirely make up for the loss of the parking lot, though, so the city is looking for additional options.) Once Wheeler Plaza is complete, the city then hopes that a developer will build both a two-story commercial building (retail below, office above) and a public plaza on the former Foodville site. During Wheeler Plaza construction this temporary parking lot will help relieve some of the pain, but its reduced size (when compared to the existing parking lot), in combination with the dust, noise, and construction trucks hauling dirt and construction materials mean that the residents of San Carlos will get to experience much of the “joy” we Redwood City residents have been enduring for the last couple of years.

Wheeler Plaza is the largest project that I’m aware of in San Carlos’ downtown. However, there is a second giant project about to begin very near by: the Transit Village Mixed-Use Project. This one received Design Review approval from the San Carlos Planning Commission last November; the developer hopes to break ground this coming January. It will sit on the strip of land between El Camino Real and the railroad tracks, and will run from Arroyo Avenue at the south end, past San Carlos Avenue and Holly Street, all the way to Oak Street at the north end—at long last consuming the long-abandoned Elite Motors building:

On this 8.7 acre site will sit 202 new apartment units (twenty of which will apparently be below market rate) and two commercial buildings. The two commercial buildings will flank the existing San Carlos train station, and all of the apartments will range to the north (some will be between the train station and Holly Street, while the majority will sit north of Holly). Although the classic train depot building will remain, all parking will be shifted south with cars entering a new parking lot from Cherry Street. The existing depot entrance at San Carlos Avenue will be closed to cars and transformed into an open plaza.

Because the Transit Village will sit on the east side of El Camino Real, construction will primarily affect Caltrain riders who use the San Carlos station as well as those of us who drive along that section of El Camino Real. San Carlos residents who live on the east side of the tracks shouldn’t be all that affected by the Transit Village construction due to the fact that the tracks here sit on an elevated berm that will act as a wall between the construction and the east-side residential area. However, that doesn’t mean that they’re getting off scot-free: the third major San Carlos project soon getting underway is a four-story hotel that will be located between Industrial Road and Highway 101, about one block south of Holly Street. The hotel will sit just south of the Bayshore Supply & Lights store and replace the two-story warehouse-style building at 595 Industrial Road: 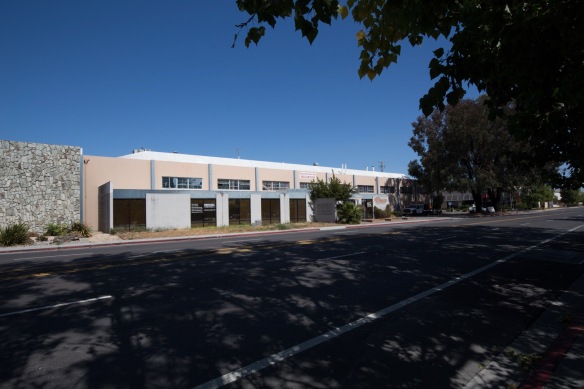 The hotel will extend from Industrial to the freeway, occupying two additional properties on East San Carlos Avenue. In addition to the building shown above, the buildings occupied by Pimental Drywall Co./R&R Raingutters and the Advanced Sports Performance gym are slated for removal.

All told the new extended-stay hotel should have just over 200 guest rooms, all with individual kitchens. While the hotel is entirely within a light industrial area, and is across Industrial Road from any houses, the residents of the area are less than thrilled with the fact that the 204-room hotel is only required to have 165 parking spaces (all in surface lots). Normally a hotel would be required to have at least one parking space per hotel room, but the hotel’s proximity to transit was cited as justification for the relative lack of parking. The area residents are concerned that 165 spaces is not enough, and that hotel guests will wind up parking in their neighborhood. A sentiment that many in Redwood City are very familiar with…

There is a lot of development going on in Redwood City, and it is certainly making things a bit difficult for those of us who like to spend time downtown. With all of the disruption it is perhaps human nature to feel as if we are being singled out for punishment. But the housing issues and corporate growth that are at the root of all the current development are not problems that are unique to Redwood City. When it comes to development that disrupts the regular pattern of our lives, we are definitely not alone.