In last week’s post I mentioned that I had a long list of places on which I needed to check, but given my limited amount of time I could only get to the ones downtown. Fortunately, those turned out to be more than enough for a single post. This week I took advantage of the great weather and checked up on many of the remaining places on my list. This took me down to Woodside Road, out onto Bair Island, and up into San Carlos.

Not on my list, but discovered while on my way to Woodside Road, was our new Wingstop. I’ve never been in one, but apparently these chain restaurants focus almost exclusively on chicken wings. San Carlos has had one for some time now, in the Best Buy shopping center on Industrial Road. Ours opened on February 1 in the Five Points Center, just a couple of doors down from Bed, Bath and Beyond. There currently are a number of flags and other temporary signage up along both El Camino Real and Oak Avenue in an attempt to get the attention of passing motorists. They certainly got my attention! While taking pictures for my files I did notice a number of patrons inside, so the extra signs may well be working. I’m not a huge chicken fan, and thus may or may not get around to trying them out, but if you are, you may want to drop by.

The place I was aiming to check out, before I was distracted by Wingstop, is the soon-to-be new home of Dependable Lock and Hardware, just about three blocks south of Woodside Road:

Some time ago I noticed that this storefront was being freshened up, and recently the “Coming Soon” banner went up identifying this building as the spot where Dependable Lock and Hardware would make its new home. I made brief mention of this business back in my post We Are Not Alone; this is one of the businesses that formerly resided on San Carlos Avenue in the block of storefronts being razed for the Wheeler Plaza project. Dependable has been operating from temporary quarters while their new home is being prepared; they had hoped to be in their new location by the end of last year, but obviously things are a bit behind schedule. In any case, expect them to be operating soon from this new storefront on the east side of El Camino Real, just south of the Target shopping center.

The next couple of items on my list were located on Woodside Road itself. Heading up Woodside the first one I came to was the Hallmark House apartment building. I’ve been watching and writing about this building for quite some time: ever since the fire that gutted it back in July of 2013, in fact. Some time after the fire, reconstruction work on the building began. But then it came to an abrupt halt, and the building has been sitting, in a half-finished state, for well over a year now:

It turns out that the building’s owner had a disagreement with their insurance company, one that took a very long time to resolve. But I’ve been told that the issues were settled late last year, and that structural plans have recently been filed with the city. Once the city has completed their plan review, they intend to issue a permit after which work should finally recommence. Which can’t be soon enough, in my opinion: this building contains 72 units of low-income housing, and we desperately need to get those units back online.

The lack of progress on the Hallmark House building stands in stark contrast to the nearby Terrace Apartments. You may recall that this apartment building, which sits a few blocks to the west on the opposite side of Woodside Road, had a fire of its own just three months after the Hallmark House fire. It, too, had to be entirely vacated and rebuilt. Today, that work appears nearly complete. Unfortunately that building’s 75 apartments are not aimed at low-income residents, and thus although it will bring badly needed housing to those that can afford it, the Terrace Apartments building won’t help the less fortunate among us the way Hallmark House will.

Walking down Woodside Road, I came to La Palma, at 1675 Kentfield Avenue (just down from the Jack in the Box). This development of 12 single-family homes on what used to be three individual lots (with a small house on each) is one I’ve been watching ever since it first appeared on the city’s list of development projects. For a long time the three original houses just sat there, but last July the construction fences went up and by October the land was cleared and foundation work had begun. Since then the developer has clearly not been sitting still: 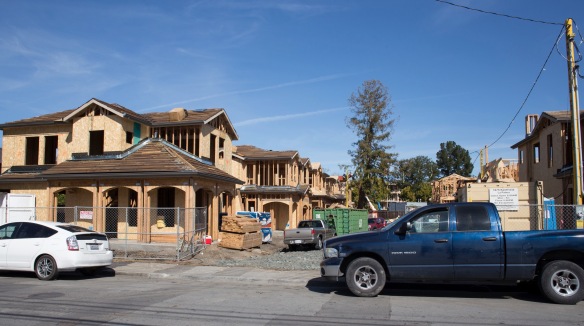 (Look between the trees that sit at the back of the property and you’ll see the Terrace Apartments peeking through.) From the project description it seems that although this project consists primarily of the twelve private homes and a private street enabling access to them, it also includes a publicly accessible “tot lot.” I’ll need to wait for the construction fences to come down to check on that particular amenity.

Moving away from the Woodside Road area, I thought it was time to provide a brief update on the Emerald Market project. It appears that the market has yet to be leased, and thus the developer seems to be focusing on the two small restaurant spaces that were carved out of the original market. Presumably those spaces still have tenants; as of last June they were slated to be restaurants named “Kaigan Sushi” and “Hilltop.” I’ve visited the site in each of the last three weeks and I’ve noted plenty of activity. Both restaurant spaces now appear to be nearly complete. Here is a picture of one of them, showing that the dining room portion of the restaurant, at least, is essentially done: 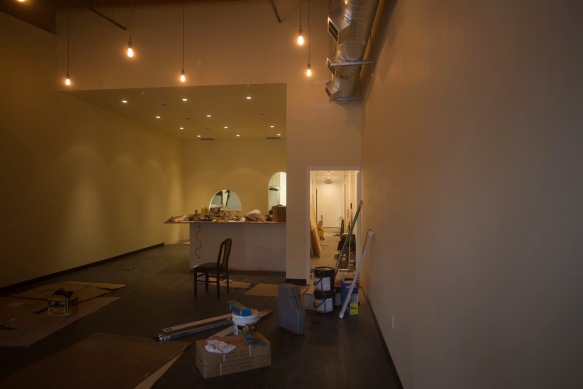 I’m excited to see these wrap up and am looking forward to their openings! I do hope that the building’s owner is able to get the market leased soon; I know I’m not the only one who would love to see a small market in this little center at the corner of Canyon Road and Oak Knoll Drive.

In last week’s post I talked about how we might soon be getting a Hampton Inn on Broadway Street, where today sits the Garden Motel. That reminded me that it was time to check in on our One Marina hotel project, which I believe is still slated to become a Courtyard by Marriott. I’m sure most of you are keeping an eye on it as well, given how visible it is from Highway 101, but in case you aren’t, here is one of the pictures I took of it this week:

A comparison of the above picture with the rendering on the city’s project page reveals that this building has almost reached its full height. This five-story, 177-room hotel is slated to be complete by late next year, and should be a welcome addition to our relatively limited set of hotels. Redwood City is undoubtedly looking forward to the TOT (Transient Occupancy Tax) revenues that this hotel will generate; those revenues go right into the city’s general fund.

After looking at the hotel, I followed East Bayshore north to Whipple Avenue and then walked out onto Bair Island, following the path to Blu Harbor. The tide was up, and I must say the inner island was looking quite beautiful:

I saw a number of birds enjoying the shallow waters. It appears that the restoration has indeed turned Bair Island back into a functioning wildlife refuge.

These days Blu Harbor (which many of you know by its former name, “Pete’s Harbor”) is a very busy place, with construction equipment crawling all over it. The main parking garage, which will eventually be wrapped by a huge building containing a whopping 311 apartments, is slowly rising to its full 75-foot height: 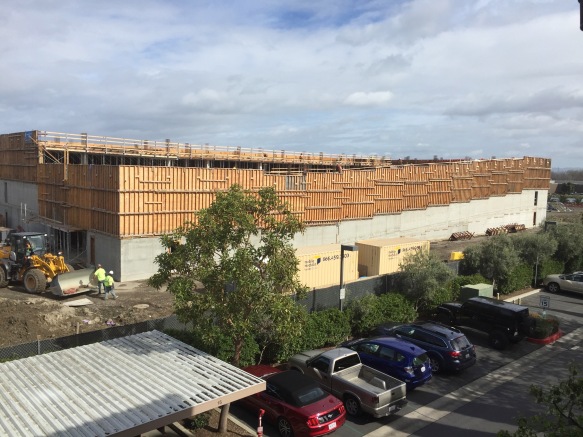 This combined parking garage/apartment building is located on the south side of the inner harbor. Beside it (beyond the left edge of the above picture) will sit the private clubhouse and pool for use by the complex’s residents. Arranged along the west and north sides of the inner harbor will be ten smaller buildings that will each contain ten apartments, for a total of 100 more. Four of these buildings will sit on the west end of the harbor, while the remaining six will be situated on the north side, across the water from the parking garage/apartment building. Here is an image taken from the entrance to the complex, in which you can see the forms for the smaller building foundations (click the image for a larger version): 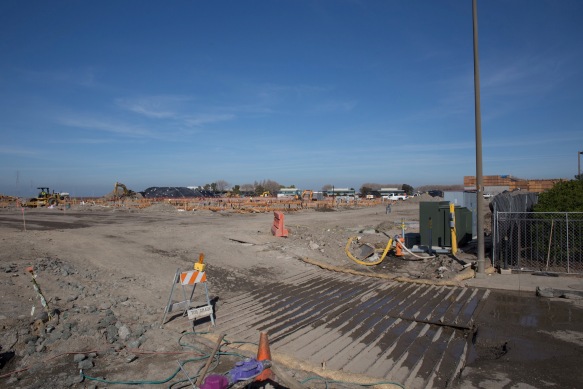 Altogether Blu Harbor will boast 411 apartments ranging in size from 500-square-foot studios to apartments with three bedrooms and two bathrooms (as large as 1,800 square feet).

Finally, I did get up to San Carlos to check on the progress of the Wheeler Plaza and Transit Village projects. As for Wheeler Plaza, except for the fact that the buildings that will be demolished have been vacated, there is no visible progress yet. The Transit Village project is a little farther along: there is construction fencing around the portion that lies north of Holly Street, and the long-vacant car showroom that sat just south of the Taco Bell has been torn down. Otherwise, however, there isn’t much to look at right now. (If you aren’t familiar with these projects and want to know more, check out my post We Are Not Alone.)

To close, I did want to leave you with one of the small delights that comes from exploring Redwood City—our latest bit of public art:

I encourage you to check this out for yourself. You’ll find this particular bit of whimsy on the west side of Courthouse square, along Hamilton Street. But this not the only place where you’ll find such sidewalk art; there’s at least one other. I’ll leave its location and design as something for you to discover for yourself. Many thanks to the Redwood City Improvement Association, the Redwood City Parks and Arts Foundation, and the various artists for putting a smile on our faces!