Whew. That was some storm, eh? According to my backyard rain gauge, since this latest set of storms rolled in (on Wednesday the 4th) we received 5.48 inches of rain. Which is quite a lot, as I’m sure you’ve noticed. Meteorologists track rainfall from October 1 to the end of September; since the beginning of October my rain gauge has registered just shy of 17 inches of rain (last year it took us until mid-March to receive that much). And we’re not done yet. Although we’re getting a few very welcome days of sunshine, by Thursday a storm is forecast to move in that could be as intense as what we just experienced. So while we should all be enjoying the nice days while we can, consider taking advantage of them to ensure that you are prepared for whatever comes next.

When the rain was coming down I couldn’t be out walking, of course. Taking advantage of our relatively dry Monday I took a long walk out on the Bay and around downtown, checking in on Redwood City’s various development projects. Making my way to the first one I was surprised and pleased at how little real impact the storms seemed to have had on my part of town. I did see one house on Fulton Street that had an awning hanging loose, presumably thanks to the high winds that accompanied our storms. And there is a house on Lowell with a blue tarp over part of its roof, undoubtedly covering up a roof leak. But other than that, all I saw were a lot of leaves and sticks (and a few larger branches) on the streets, sidewalks, and yards. I’ve heard that there were uprooted trees in nearby areas, and I believe that there was some flooding in parts of the city, although not nearly to the degree we’ve seen in years past. It does appear that Redwood City’s efforts to minimize flood damage are paying off.

My walk took me on a large loop along our northern border, first to check on the development on Finger Avenue. I’ve reported on this new eight-home subdivision before, most recently in my post Redwood City’s New Green. Back then—in early September—grading had just begun. Now, the two homes closest to Finger Avenue are rapidly taking shape:

Foundations for the remaining six homes appeared to be in place (or at least formed), but it appears as if the developer plans to finish the homes closest to the street first, perhaps to provide a small buffer between the remaining construction and the majority of the neighborhood. Regardless, the intense storms that hit us on Thursday and Saturday nights seemed to have little impact on this project. I did learn that the development has an official name, though: it has been dubbed “The Grove” by its developer, Edenbridge Homes. And they now have a website where you can learn more about this “private enclave of eight new custom executive homes”: http://edenbridgehomes.com/thegrove.htm.

I next swung by the twelve-unit townhouse development that is (slowly) being built at 150 El Camino Real, between the KFC and the old Mountain Mike’s Pizza restaurant. I saw no activity here, and some storm impact: some of the construction fencing appeared to have blown down, and the shallow hole that had been dug in the center of the property was full of water, making it look more like they were building a swimming pool than a set of townhouses:

Returning from San Carlos on Wednesday I observed that the fence was being repaired, so the project isn’t being ignored. In fact, this development is sporting a new sign, proudly announcing that this development will be known as “The Towns @ Avondale, by Summerhill Homes” (the property is at the corner of Avondale Avenue and El Camino Real). Summerhill, too, has a website (https://www.summerhillhomes.com/coming-soon/towns-at-avondale/). Although their site has little project-specific information on it yet, Summerhill is taking sign-ups for interested persons. For more on what this project is all about, see my post A Lot to Remember.

After “The Towns” I walked down Whipple Avenue and crossed Highway 101. I then proceeded to walk out onto Bair Island, taking the path that led towards where the giant Blu Harbor development is rapidly progressing. The walk on Bair Island was quite peaceful; I was one of the only people out there, and the paths were clear and well-drained. The restored wetlands, as you might expect, were quite wet:

The Blu Harbor development consists of ten buildings containing ten apartments each, plus a huge 302-unit apartment building wrapping a seven-level parking garage. The smaller buildings appear to be nearing completion; they are the shorter buildings you can see in the above picture. The larger building sits behind the rightmost of them, still clad in plywood and yellow insulating board. Here’s a closer view of that part of the development from a slightly different angle: 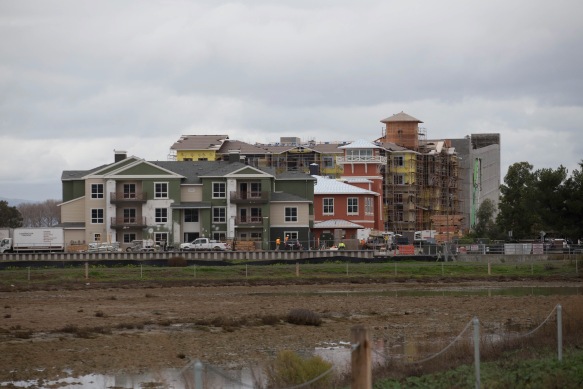 In the above, the green-and-tan building in the foreground is one of the ten-unit apartment buildings. Behind it, the brick-red building with the tower is the clubhouse. And behind that is the larger apartment block and the parking structure (the sloping concrete structure behind the scaffold-encrusted apartment building).

Blu Harbor’s website (http://rentbluharbor.com) claims that Blu Harbor will be opening this month. While the entire development clearly won’t be finished by the end of January, They may make the apartments available in stages, perhaps finishing off the ten-unit buildings and leasing those while keeping the larger apartment block under construction. Whatever they do, I’m looking forward to finally being able to walk onto the property once again (the development includes a spur of the Bay Trail that runs from the entrance to the northernmost point of the property, plus Blu Harbor’s marina will be open to the public).

From Blu Harbor I followed Bair Island Road back towards the freeway, where I encountered our new, almost-open Courtyard by Marriott hotel. A lot of the construction fences were down and for the first time I was able to get a look at the hotel’s entrance, which is on the side facing away from Highway 101:

The hotel will have an inset drop-off zone (see above), perfect for rainy-day check-ins. Cars will drive in and almost immediately make a sharp left directly in front of the entry doors leading to the lobby. They can then proceed to the internal parking garage, which consumes about half of the ground floor and essentially all of the second floor.

The hotel, too, seemed to have weathered our storms with only minor impacts: I saw a wall-mounted lamp hanging as if it had been blown off its mounting screws, but little else of note. From the outside, the building looks complete—although when I was there the landscaping had yet to be done. According to their website the hotel will open in February.

I next wandered through downtown taking pictures, occasionally ducking under an overhang to escape a passing rain shower. I visited all of our downtown in-progress office and residential projects to see how they are doing. Here is the short version:

Finally, I spent just a bit of time poking around the old Redwood City Nursery location at 2760 El Camino Real near Oakwood Drive (between Ferrari Silicon Valley and Oil Changers). Redwood City Nursery was located here from 1949 until September of 2014, when Mark Brown, who then owned and ran the nursery, elected to retire. Since that time the property has sat pretty much unused. Unused except for the cars that daily fill the front parking lot, indicating that the property’s owner is letting a nearby business use the property for employee parking: 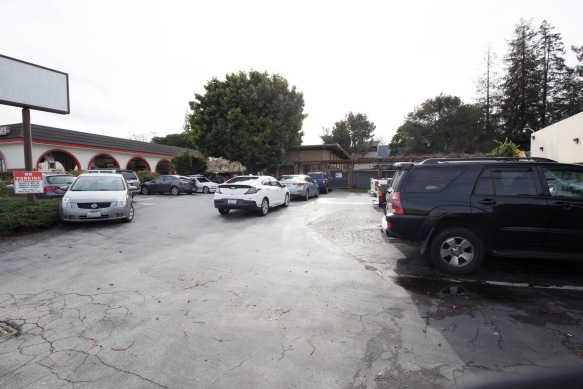 The lack of any other visible activity had lulled me into complacency; my visit prompted me to finally check the county records to see if this property had been sold. And indeed it had been, almost immediately after the nursery’s closing. The nursery closed in September 2014, the property was listed on October 2, and it was sold on October 17. The original asking price for the .46 acre plot was $2.8 million, while the actual sale price was nearly that: $2.75 million.

I was interested to learn that the property was not bought by a traditional developer, but was instead purchased by “Stoma LLC.” Stoma LLC was incorporated in May of 2014 and appears to be headed by Arthur W. Zafiropoulo, a resident of Atherton who currently serves as the chairman and CEO of Ultratech Inc. Zafiropoulo has been in tech for his entire career, and thus this purchase is presumably an investment, either to be sold to a developer or to be developed by Stoma. Based on current zoning the property can support a mixed-use development (offices and/or residential) of up to 50 feet (four stories) in height. Zoning allows for up to 18 residential units on a property this size.

I made it home from my walk on Monday not long before the rains started up again. And start they did: based on my backyard data, Tuesday night’s storm netted more rain (1.72 inches) than Saturday night’s 1.39 inches. That of course kept me inside, researching and writing this post, and doing chores around the house. Fortunately our place weathered the storms well, freeing me to get outdoors as much as I can before the next round begins.

As a heads-up to those of you interested in downtown development (regardless of whether you are for or against it), Greystar is bringing its Greystar IV project—an eight-story, 350-unit apartment building that would sit on El Camino Real next to Greystar III—before the Planning Commission on Tuesday, January 17 starting at 7:00 p.m. Commissioners will also be reviewing the proposed 910 Woodside Road project. Interested citizens may want to attend.

2 thoughts on “Between Storms”