I’ve always thought of the Bay Area as a pretty green place, both in terms of vegetation and in terms of attitude. Lately, however, Redwood City in particular has been greening itself up in an altogether different way: through the use of construction fencing covered with green fabric: 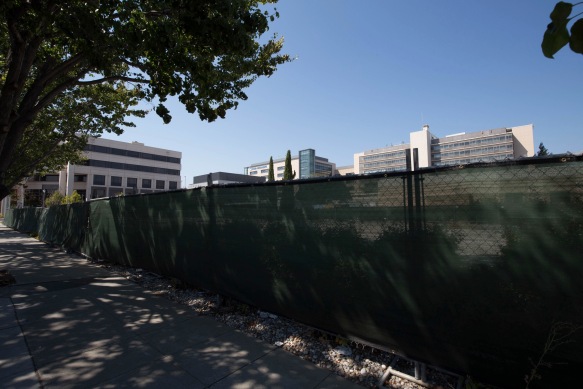 I regularly monitor the web page that the city uses to list these development projects. That page is divided into “Proposed,” “Approved,” “Under Construction,”  “Completed,” and “Other.” Proposed projects are in the earliest stages, and only exist as projects on paper. Because they are not yet approved, they bear watching (and are why we, as residents of Redwood City, should be attending Planning Commission and City Council meetings: to both monitor the discussion that goes on around these projects, and to make our opinions known). Based on various factors, a project can either be approved by the Zoning Administrator, the Planning Commission, the City Council, or some combination of those three. If and when a project has been approved by the appropriate body, the city updates the development projects web page, moving the project under the “Approved” heading.

Once a project is approved, it does not immediately break ground. Often a developer still has a number of steps they need to take before actually commencing construction. These might include finalizing plans, obtaining permits, and securing financing. This stage can take quite a bit of time: months, or in some cases, years. Usually, the project eventually moves on to the “Under Construction” phase, and activity begins on the project site. But trouble in this phase can cause the project to come to a screeching halt.

It does appear that we have one newly approved project that may never see the light of day: one of my faithful readers just informed me that the 91-unit condominium building proposed for the corner of Jefferson Avenue and Bradford Street—the 603 Jefferson project—appears to be headed for the scrap heap. It seems that a local lawyer, who has fought the project every step of the way, has filed a lawsuit with the city over the project. According to this reader, the Pauls Corporation (the project’s developer) “decided that Redwood City was not the venue he could afford to continue in and he scrapped the project”. So although I plan to keep an eye on the project, it appears that we can strike that one from the list…

Given the sheer number of projects falling into the “Under Construction” category at the moment I decided that now was a good time to check in on each of those projects, just to see how they are doing. It turns out that the city’s list is pretty accurate. Of the thirteen projects listed as “Under Construction,” only one (Classics at Redwood City) is not exhibiting any signs of active construction, and that is because it is pretty much done. While it may not have the final sign-off from the city that would put it in the “Completed” category, this eighteen-unit condominium complex on Brewster Avenue has been leasing for some time now, and is for all intents and purposes done.

Although I haven’t walked out to Redwood Shores lately to verify the status of the Oracle Design Tech High School project with my own eyes, for now I’m assuming that it is indeed being worked on. From personal observation I can attest that the remaining “Under Construction” projects really are under construction. Pretty much every one of them has a construction fence around it, and a couple, which have been sitting idle for some time now, are finally seeing activity.

One of these latter projects is the set of eight homes being built on Finger Avenue, near El Camino Real and Redwood City’s border with San Carlos. Construction fences went up many months ago and demolition of the three old homes that occupied the site occurred soon after, but since then the project has simply sat, untouched. But that all changed just a couple of days ago, when the heavy equipment and surveying crews moved in. The site is now a busy hub of activity, with men staking out the various homebuilding sites and heavy equipment now pushing dirt around:

This project is taking place in the middle of a well-populated residential area. I must say I feel quite a bit of sympathy for the area’s residents: with eight homes to be built, there is going to be quite a bit of construction activity and noise for the next year or so.

As for the other projects on the list? Every one of these is surrounded by construction fencing, and is actively being worked on: 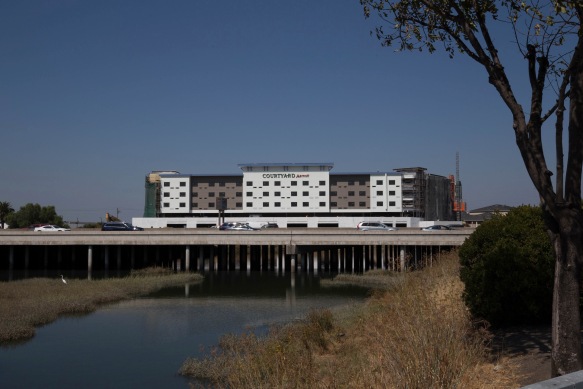 After carefully scrutinizing the city’s development project list, I noted that one of the projects listed under “Approved” now seems to be under construction. I’ve been watching the stalled project at 150 El Camino Real with great interest for some time now. On this empty lot next to the old Mountain Mike’s pizza restaurant the developer will be building a twelve-unit condominium complex. For various reasons that property has sat idle for many years now, with only minor signs of activity. Recently a chain-link fence went up around the property, and with the addition of the green fabric we now have a proper construction site. And an active one, it seems: there is now some heavy equipment on the site, ready to start prepping the lot and digging foundations.

Looking on the city’s web page at the projects listed under “Proposed,” there are a couple of other projects I should comment on. “Kaiser Hospital Phase II” is a proposal for a four-story medical office building behind Kaiser Hospital, at 1175 Marshall Street. Although not yet an active construction project, there are construction fences around the property, and it appears that demolition of the building that formerly occupied the site has already taken place. I’ll need to do some digging to find out whether or not this project is more than just “proposed.”

Another project on the Proposed list is very much active: the “Starbucks Reserve” that is coming to the former Le Boulanger space at the corner of Broadway and Hamilton. Because this is project is mostly just an interior build-out, for now no construction fencing is needed. If you go by the site it is easy to think that no activity is taking place, since the windows are papered over and the main entry doors are usually closed. But peer into the side door (on Hamilton) as I did, and you’ll see all kinds of activity going on:

Based on the project plans that are on the city’s website, this framing is for a storage room and for the restrooms.

Finally, I’ve mentioned it before but the 204 Franklin Street project—a 91-unit apartment building on Franklin Street across from the Franklin 299 apartments—although listed as “Approved” may never actually come to pass. This one is dependent on the fate of the proposed Greystar IV project, which, if approved, would supersede 204 Franklin. Greystar IV is encountering some heavy resistance from both the city and the public, however, so we’ll likely have to wait quite a while before we know the outcome of either of these two projects. For now, though, 204 Franklin remains in the Approved category.

And those are just the larger projects. There are of course numerous small home projects scattered throughout the city that are also protected by green construction fencing—too many to list here. But it’s clear from walking (or driving) around the city that our city is in the midst of a building boom. This boom won’t last forever; someday the color green will once again just signify a nice bit of landscaping. For now, however, watch for the construction fences—Redwood City’s new green.