In one of my first blog posts—Growth Spurts, which I wrote back in October of 2013—I went into some detail on the Township Luxury Apartments project at 333 Main Street. At the time Township was just wrapping up construction. Indeed, that project finished up in December of that year and began leasing that same month. I find it hard to believe that it has been more than two and a half years since I wrote about it, but the numbers don’t lie.

Township is a 132-unit luxury apartment building (17 of which are affordable). At this time it appears that they only have a handful of units available, ranging in price from $3,412 to $8,750. To its credit, it is an attractive looking building with a healthy list of amenities. And although not smack dab in Redwood City’s downtown—333 Main Street is located on the bay side of Veteran’s Boulevard, almost directly behind the In-N-Out Burger—it is only a couple of blocks from courthouse square and thus is within relatively easy walking distance.

At the moment Township appears to be the only residential development in the “NOMA” (North of Main) precise plan area of Redwood City, which is bounded by Main Street, Veterans Boulevard, and Redwood Creek. But a new proposal for the property next door would give Township a new residential neighbor. That, when added to the already approved project slated for the small retail plaza just across Main (that until recently was the home of the Lobster Shack) will help bring round-the-clock life to this small area of offices and light retail.

I should note that while this latter project—849 Veterans Blvd—is not actually in the North of Main precise plan area, being that it is literally right across the street from Township, the distinction is only a technical one.

The project that Redwood City’s Zoning Administrator approved for the property next to In-N-Out Burger will be a six-story apartment building containing 90 apartments. Those apartments will range from 674-square-foot “junior” one bedroom units up to ones that are 1,443 square feet in size, with three bedrooms and two bathrooms. Of the building’s 90 apartments, seven will be classified as affordable at the Very Low Income level—a designation that will remain in place for 55 years. Those seven affordable units will have a range of sizes: 2 one-bedroom units, 3 two-bedroom units, 1 three-bedroom unit, and 1 junior one-bedroom unit.

The design that the architect has come up with is an attractive one. Because the property is long and thin, the building is shaped to match. But as you can see from the rendering included as part of the approved plans, the design uses varying materials and colors, plus an unusual roofline, to give the building visual appeal: 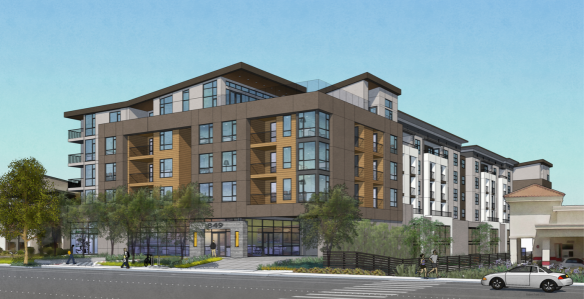 The above rendering shows what the building should look like as viewed from Veterans Boulevard (note the In-N-Out Burger building on the right side of the picture). Across Veterans from this building is the large ten-story Indigo apartment complex and the six-story Bank of the West building. Behind it, across Main, is the five-story Township apartment building. On the northwest side of the building (the left side, in the above rendering) is a three-story office building.

The land upon which this building will sit slopes such that the Main Street end is about six feet lower than the Veterans Boulevard end. This enabled the architect to come up with an unusual design for the building’s parking. Because the water table is fairly high in this part of town (due to its proximity to the Bay), all of the parking has to be essentially above ground. But rather than just building a normal two-level parking garage with a single entrance, instead this building has separate entrances for the 142-space garage’s two levels, with no connecting ramp between those levels. To get to the lower level cars enter from Main, whereas to get to the upper level cars enter from Veterans. Because all of the parking will be assigned to specific apartments, and because the garage won’t have any open spaces that can be used by non-residents, there should be no need for cars to be wandering from one level to the other, looking for an empty space.

If you look carefully you can see that in addition to the balconies that each apartment seems to have, there is common open space for use by the residents on the third floor along the building’s two long sides (facing In-N-Out Burger, and facing the office building on the other side). There is also a large corner deck on the sixth floor for the resident’s use, on the Veteran’s Boulevard end.

If you go by the site today you’ll notice that Jefferson Boulevard dead-ends into Veterans right in front of this building. As part of the project the intersection will be reworked, adding a fourth “leg” leading right into the second-level of the building’s parking garage. Perhaps somewhat more controversially—although the Traffic Impact Analysis that was done says it will not cause any significant traffic impacts—the number of lanes on Veterans Boulevard between Main and Brewster Street will be reduced to two each way (from three). East of Main Street Veterans is already only two lanes each way; this change will extend that configuration to Brewster. I must point out that this lane reduction is something that the city has been wanting to do for some time: they are simply taking advantage of the construction project to have it done. Thus, while the timing of the change is a result of this project, the impetus for it is not.

Finally, I’ll note that this development will be paying the usual fees to the city, including water and sewer fees, a School Impact fee, and a Transportation Impact Fee. Issuance of a building permit will trigger a Parks Impact fee in the neighborhood of $880,000, and an Affordable Housing fee of around $361,000, a fee that would have been eliminated if the developer had elected to increase the number of affordable units in the building to nine (from the current design’s seven).

I see a lot to like in this project: it has an interesting design, it is pretty well located, it isn’t too tall, and it has a number of affordable units. I’ll be interested to see what the final building looks like, and how much the apartments end up leasing for. Construction fences have just gone up around the property, so the existing building should be coming down soon.

At this point, the biggest difference between 849 Veterans—which will be directly across the street from Township—and 353 Main Street—which is slated to sit right next door to Township—is the fact that whereas 849 Veterans is an approved project, 353 Main Street is still in the proposal stage. However, it is shaping up to be an interesting project in its own right; I’ll be keeping an eye on it when it comes up for approval.

When heading down Main Street towards the bay, shortly after crossing Veterans Boulevard you’ll see 353 Main on your right, just before you reach Township Apartments. Currently it consists of a long and narrow one-story office building containing a handful of medical service providers:

The developer, ROEM Development, hopes to replace this row of offices with a six-story, 125-unit apartment building, with 19 of those apartments set aside as affordable at the “moderate” level to satisfy the city’s 15% requirement. The apartments would range from 544-square-foot studios to 1,157-square-foot two bedroom, two bathroom units.

The building’s parking structure would be of a more conventional design, with one below-ground parking level and one at ground level, connected by an internal ramp. Vehicles would access the garage by way of a driveway on the left side of 353 Main (between it and Township). The existing driveway visible in the above picture would remain, allow access to the parking lot for the two-story medical office building that is just visible on the right side of the picture.

The property at 353 Main is an odd shape: not only does it have a forty-five degree bend in the middle, it is narrow on the Main Street end and widens as it extends toward Redwood Creek. The building follows this shape, enabling a number of the apartments along the back to look out directly onto Redwood Creek (and the back side of the Toys “R” Us building on the other side).

Because their plans are only conceptual at this point, these numbers (and indeed the building’s design) may change, but to give you an idea of what they are thinking, here is one of the renderings they included with their conceptual plans:

And just for perspective, here’s what that very view looks like today: 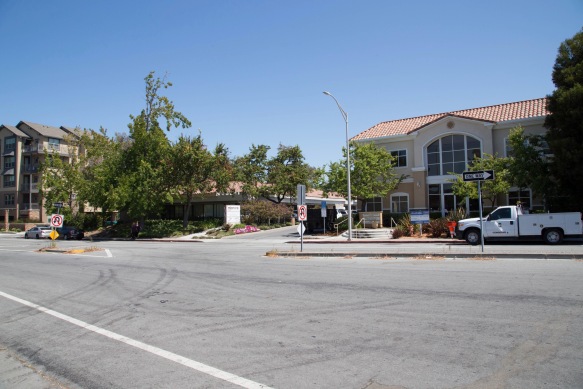 The current design has the building’s outdoor common space split between a deck on top of the parking garage (facing into the parking lot behind the two-story medical office building) and a ground-level patio out back that includes a pool, waterfall, outdoor fireplace, and outdoor kitchen. This design doesn’t appear to have any rooftop decks.

Before Township was constructed, Main Street north of Veterans Boulevard was mostly just a way to get to the DMV or to the Toys “R” Us end of Kohl’s Plaza. The addition of In-N-Out Burger gave people another reason to go there, since their drive-thru is only accessible from that part of Main. Township brought hundreds of new residents to the area, and now, if and when either or both of 849 Veterans and 353 Main are built, hundreds more will call this previously obscure part of Redwood City home. It is always fascinating to see an area change like this; I’ll be interested to see what effect these developments, if built, have on our city’s dynamic.