Caltrain has been making the news lately. First there was their announcement that they’ve set another all-time ridership record: an average of more than 60,000 riders per week over the past fiscal year. And then there was the announcement by the California High-Speed Rail Authority that they’ve approved $713 million in funding for the Caltrain electrification project. Those two got me thinking about transit again.

Ever since I was a young boy I’ve been interested in trains. Growing up my family had a place in northern San Diego County that was about half a block from the tracks, and I made it a point to watch each train as it went by. When it became time to go to college, I was delighted to realize that I could hop on a train in downtown Los Angeles and alight some twelve hours later just a short walk from campus. Those two things, I believe, cemented my love for trains and made me into what I am today: a self-confessed train geek.

Naturally, then I try to use Caltrain whenever it makes sense. My last job was just on the other side of Moffett Field, so I took Caltrain to Mountain View and then switched to VTA’s light rail for the final leg. That worked so well that I very rarely had to drive to work—which suited me just fine! I’ve always hated sitting in bumper-to-bumper traffic on 101. And indeed I was proud that I was no longer contributing to our congestion problems, was reducing my carbon footprint, and was saving money to boot.

Having ridden Caltrain and VTA Light Rail here in the Bay Area for years, and having recently gained familiarity with Portland’s acclaimed mass transit system, I am particularly excited that Redwood City has commissioned a study for a possible system of streetcars. Often referred to as the “Broadway Streetcar,” in fact the study is considering routes along Broadway, along Middlefield Road, and along Seaport Boulevard. This map from the project’s web page shows the routes under consideration: 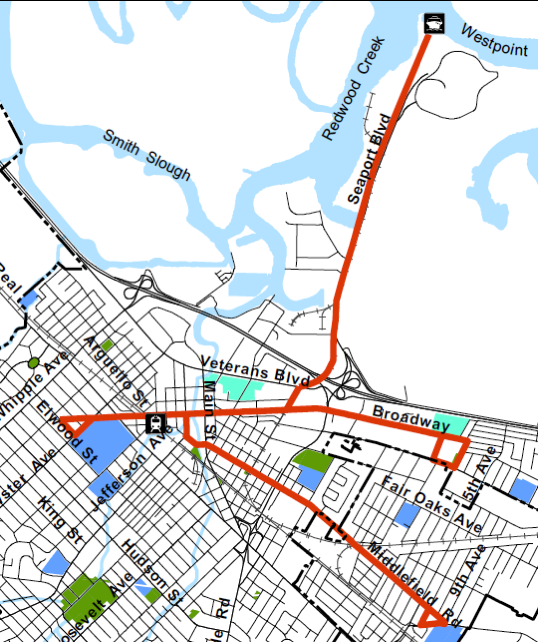 According to the city, streetcars are more popular than buses due to their more comfortable ride and because, being electrically powered, they are quieter and emit less pollution. I suspect that there is also a “coolness factor”: to many buses probably seem old-fashioned, particularly when compared with the sleek, modern streetcars that are used in places such as Portland.

Because streetcar tracks are simply laid into existing streets, they don’t usually require right-of-way purchases and major infrastructure changes. That makes the construction of a streetcar system relatively simple and inexpensive, at least when compared with a heavy rail system along the lines of Caltrain. Of course, buses are even cheaper still, but if they don’t attract the ridership then that is false economy.

A large impetus for a streetcar line is the Stanford in Redwood City project, which will be located along Broadway, between Douglas and 2nd avenues. If built as planned, that project will consist of four office buildings totaling 590,000 square feet plus a parking structure with space enough for more than 1,000 cars. Along with this will be a fitness center, a child care facility accommodating no less than 100 children, a cafeteria, and various other support facilities. As you can imagine, this has the potential to bring thousands of new employees to the area each day. However, this site is about two miles from our Caltrain station, making it well out of reach to the casual Caltrain commuter. While a bus could certainly be employed to transport people back and forth—and Stanford’s plan calls for a free Marguerite Shuttle to do just that—the streetcar could be even better. Recognizing that, Stanford has chipped in $75,000 to help pay for the streetcar study, while the city applied for and received a grant in the amount of $450,000 to cover the study’s remaining costs. 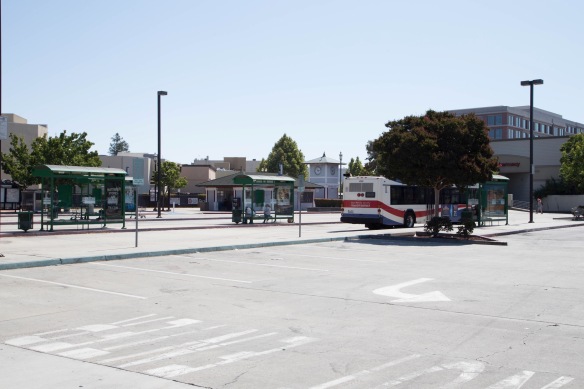 A streetcar running from our Transit Center (the Caltrain station) to the Stanford site will be popular with more than just those who work on Stanford’s Redwood City campus, however. Since it’ll run right through the heart of our increasingly popular downtown, people who work or live anywhere within an easy walk of that section of Broadway will be able to use it as well. And given the recent and continued growth in the number of commercial and residential buildings downtown, that should include a lot of people.

Then, while the Broadway line might be considered by some to the be the most important of the three, there are quite a few people who work out at Pacific Shores—at the far end of Seaport Boulevard—that would benefit from a line running out there. That line would also serve the thousands who work out in the Chesapeake Drive area, not to mention those who work at the Port of Redwood City. And if we ever get regular ferry service to Redwood City, a streetcar line would be just the ticket to transport people to and from that ferry. Finally, if the Inner Harbor area is redeveloped as planned, that streetcar line could be a terrific way to get out to the Inner Harbor without having to drive—which, given the fact that the draft version of the Inner Harbor plan includes almost no public parking, will be critical.

The above map—which is only a proposal, of course, and may be quite different from what will be in the completed study (assuming that the study, which should be done in the Spring of 2017, agrees that a streetcar of some sort is indeed financially viable)—also shows a third line, running along Middlefield Road from Broadway down to the vicinity of 5th Avenue. Whereas I think that most of the passenger traffic for the Broadway and Seaport lines will originate from the Caltrain end in the morning and will head towards Caltrain in the evening, passenger traffic on a Middlefield Road line will likely be just the opposite: since there are a great many residents in North Fair Oaks within easy walking distance of Middlefield Road, and not too many large employers there (yet), I’m guessing that if such a line is built it will primarily serve to carry people from North Fair Oaks into downtown Redwood City and to the Caltrain station in the morning, with the reverse occurring in the evening. 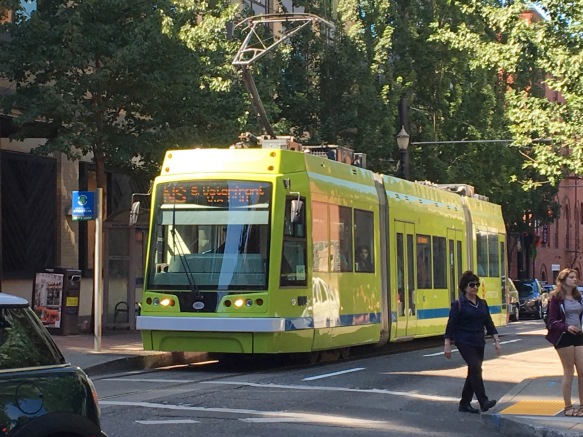 Over the last year or so my wife and I have had a handful of opportunities to ride the streetcars in Portland, Oregon. They are a very popular means of travel, and I can certainly see why. Compared with a bus they are quiet (being electrically powered), comfortable, and, because they are sort-of high-tech looking, fun. Like Redwood City’s contemplated system, Portland’s streetcar system only has three lines: the A Loop, which makes a clockwise loop around the city; the B Loop, which pretty much follows the same route, only counterclockwise; and the NS Line, which runs back and forth between the northwest end of the city and the south waterfront area. The streetcars are complimented by an extensive set of bus lines, and the “MAX”, which is a heavier rail system more akin to BART. The beauty of Portland’s system—and what makes it so popular—is that a single ticket gets you onto all streetcars, buses, and the MAX. Plus, you can buy the ticket right on your smartphone, for a very reasonable price: a day pass is only $5. Finally, there are some great smartphone apps that plan your route for you, making it a snap to navigate the system. All-in-all, Portland’s transit system is the kind of thing you’d expect to find here in Silicon Valley.

Of course, as great as streetcars might be, excessive traffic is a complicated issue that won’t be solved by streetcars alone. Redwood City is also looking at other ways to help alleviate the problem. There is the revamping of the Highway 101/Woodside Road interchange, for instance—although that is a very long-term project that even if built won’t pay off for years to come. There is the Farm Hill Boulevard Pilot Street Improvement project, in which the city is seeing just how much improvement can be gained simply by re-striping a well-used thoroughfare (in this case, Farm Hill Boulevard). There are the new electronic signs that will direct downtown drivers to available parking. There are the bike lane changes that the city hopes will encourage people to bicycle, rather than drive, downtown. And finally, the city is developing a city-wide transportation plan that should be done in about a year. 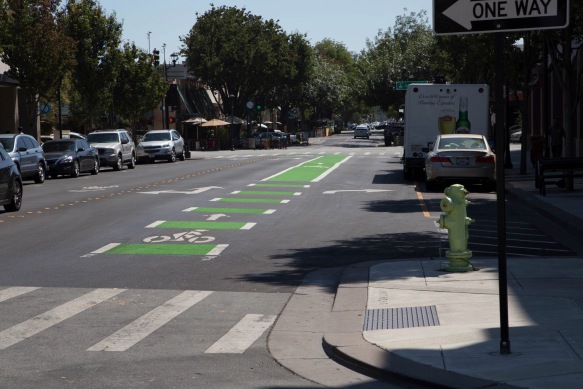 Although the recent removal of the small island on Broadway next to the Century Theaters wasn’t solely for the benefit of bicycle riders, the lane configuration that the city eventually settled on (shown above) put the bike lane in a rather interesting position: right between the two lanes of traffic. To ensure that motorists are very clear about the position of that bike lane, it has been painted bright green.

New bike lanes are slowly appearing in other parts of the city as well. Although Redwood City’s Complete Streets Advisory Committee is involved with helping improve traffic flow for motorized transport, an important part of its charter is to improve things for those of us who walk and ride bikes. The theory here is that if we can make things safer and easier for pedestrians and cyclists, many people will opt to leave their cars home and instead walk or ride. Clearly, the more we can get people out of their cars, the less automotive traffic there will be.

In its latest experiment to make things safer for both pedestrians and cyclists, you’ve undoubtedly noticed that the city finally closed off Theatre Way to all but pedestrians: 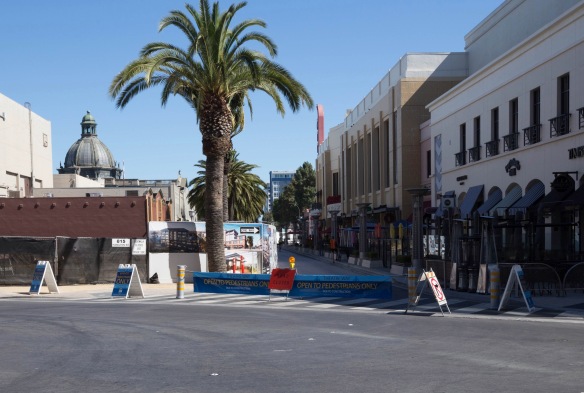 Back in June, in my post Street Walking, I noted that people were treating Theatre Way as a pedestrian mall even though it is a public street. Based on the pedestrian behavior I had observed, in that post I suggested that the city close Theatre Way. Apparently the city was having the same thoughts, because, on a trial basis at least, they did. While the wording of their announcement implies that they may reopen Theatre Way to traffic at some point—perhaps when the 815 Hamilton Street project is complete—I sincerely hope that they don’t. Theatre Way is lined with shops and restaurants, and it only makes sense to allow people to dart back and forth from one side to the other without having to utilize the crosswalks at either end of the block. I hope that they see that unconventional changes like these—removing the Broadway island, closing Theatre Way—can have real positive benefits for pedestrians, cyclists, and motorists alike.

Although the changes may be coming more slowly than we’d like, I’m pleased to see Redwood City making a wide range of efforts to improve our current traffic situation. I do hope that they push harder and take a more active role in trying to manage the heavy traffic that we are experiencing these days. But Redwood City is more than just the City Council and City Staff; Redwood City is us. We, too, need to do our part, by walking and biking more, and by driving less. Carpool, take mass transit, combine trips—every little bit helps.

On a related note, at its September 12 meeting the City Council is hosting a study session on the City’s “Parking and Transportation Demand Management Initiative and Options for Addressing Neighborhood Parking.” This should prove to be an interesting topic for any Redwood City resident interested in our parking issues.

10 thoughts on “In Transit”