The other day my wife and I had a handful of errands to run, all of which could easily be done in downtown Redwood City. While normally I might have suggested that we walk—my wife is rarely averse to a stroll downtown—we were short on time and so we drove. As the city would have us do, we parked once and walked to all of our downtown stops. Because of its central location I headed for the parking garage beneath the Century Theatre building, where we found plenty of empty spaces that were well protected from the warm summer sun.

Our first stop was at the Post Office, which is conveniently located just across the street from the parking garage. Then we strolled over to Bank of America, which is only a block and a half down Jefferson Avenue. 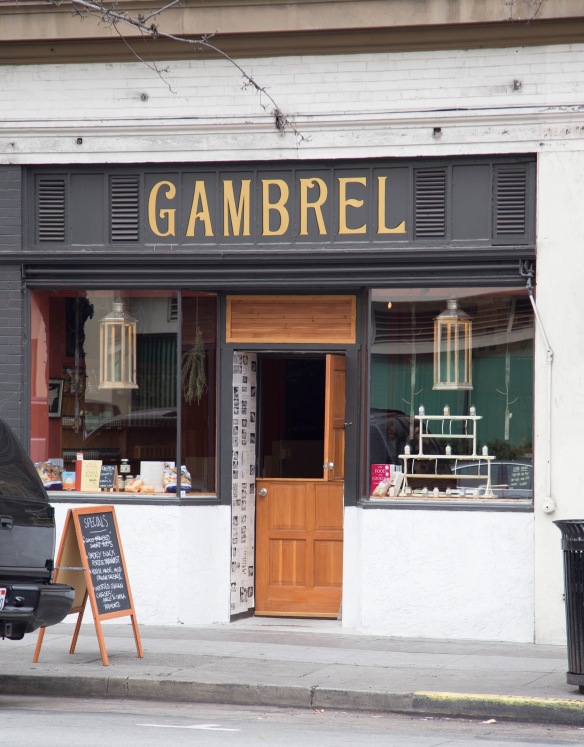 For our third errand we headed to Main Street. There we dropped in to Gambrel & Co. to check on the feasibility of ordering something to barbecue for a friend’s retirement party. Ben (the proprietor) had a number of items on special that day; his sign listed heritage pork, house-made sausages, organic pasture-raised chickens, and grass-fed beef. All were tempting, but we went with the beef. And I must say, it was terrific! Gambrel & Co. is located in the Sequoia Hotel building, on the Main Street side, at 810 Main. You can often find street parking along Main Street, but the shop is easy enough to get to from the large Main Street parking lot (which is behind the store, and is accessible from Main, Marshall, or Jefferson). If you haven’t yet given Gambrel & Co. a visit, drop by sometime and see what they have to offer. They’re closed on Mondays, but are open from 11 a.m. to 7 p.m. Tuesday through Thursday and 11 a.m. to 5 p.m. on weekends.

Because we were downtown around lunch time, we took the opportunity to stroll down “Theatre Way” (Middlefield Road, in actuality, but the city understandably likes to promote it as Theatre Way) and check out Cyclismo Cafe. We had been there a couple of days before, when my wife was in search of a latte. Knowing that Cyclismo had very recently opened (their official opening day was May 27), and knowing that they served coffee I had suggested that we (well, she—I don’t drink coffee) give them a try. On that first visit we noticed that they served “Avocado Chocolate Pudding”; the combination sounded odd, but we just had to give it a try. My short review of the pudding: it’s amazing! You really don’t taste the avocado, but it gives the pudding a very rich texture that seems to highlight the very dark chocolate used in the recipe. You’ll find it in the refrigerator case opposite from the register: if you like chocolate, you owe it to yourself to check it out.

Because our previous visit was only for coffee and pudding, on the day we were running our errands we decided to give some of their organic lunch items a try. Their regular menu isn’t yet on their website, so allow me to fill you in on some of their offerings. First off, they have a nice variety of coffee drinks and teas. Espressos, cappuccinos, lattes, and more, plus plain coffee, cold brew, cocoa, and Mighty Teas of various flavors are on offer. If you are looking for breakfast, they serve a baked egg dish, oatmeal, muesli, a granola-yogurt-fruit parfait, and various breakfast pastries. At lunch they serve a couple of different salads, plus a handful of paninis and sandwiches. And those are just the items on the regular menu: they also seem to have some specials that they display behind glass along with some of the menu items. Pay attention to the writing on the glass that lets you know what they are featuring that day. Finally, Cyclismo also has a number of “grab and go” items in the open fridge, so if you are in a hurry you can keep the visit short.

The cafe’s decor is themed around bicycles, and I understand that the bikes that they have on display will change from time-to-time. Inside, the cafe is clean and open, with a large communal table down the center and smaller tables along the walls. Since it was a nice sunny day, however, we elected to sit outside on one of the half-dozen or so blue metal umbrella tables.

For my lunch I chose the Aztec Tuna Salad sandwich from the regular menu. My wife opted for the Chicken Salad on Quinoa, which was one of that day’s specials. She had a latte, I drank water, and we both shared another Avocado Chocolate Pudding. We both enjoyed our lunches very much. Both our entrees were a perfect size, and both seemed to be made with quality ingredients. We definitely plan to go back, which should say enough!

Sitting there on “Theatre Way,” I couldn’t help but notice how things have changed over the last couple of months. Nearly every food-service place along the street now offers outside seating, and most have now created small “yards” using low fencing of a design unique to each. Cyclismo Cafe’s seating area is somewhat unique in that not only does it have an opening in its fence on the side facing the cafe (as you’d expect), it also has an opening on the street side. Most of the others—as an example, Timber & Salt, which is right next door—have a solid fence on the street side, presumably to keep patrons from accidentally stepping into the roadway.

Whatever the intention, these fenced outdoor seating areas may have inadvertently created a new problem. Together with the planters that help to delineate the boundary between street and sidewalk, there are very few escape routes for a person walking along the street. And given that the bricks used to make up the street causes it look like a pedestrian walkway, people regularly treat it like one, seemingly oblivious to the cars that approach from behind. Once pedestrians become aware of the potential danger, they then discover that they have only a narrow step upon which they can stand to let the cars go by. While sitting at the cafe I observed quite a few people walking down the street from the direction of the Box buildings, most not realizing (or caring) that they were walking in the street, at least until a car came by. 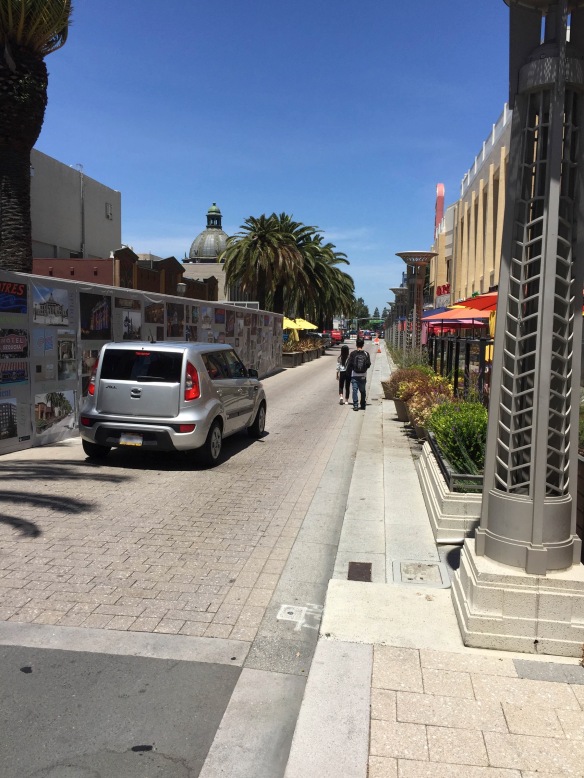 Watching this behavior simply reinforced my belief that this one block of Middlefield Road should be closed to vehicles and instead turned into a pedestrian mall. Isn’t it time to acknowledge that since so many people insist on treating it as one, that we should just make it so?

The confusion between cars and pedestrians on Theatre Way is somewhat echoed just around the corner, on Broadway. There we had an island dividing two lanes of traffic, with insufficient signage to indicate how cars in the two lanes should behave once they reached the Jefferson Avenue intersection. Fortunately someone figured out that this design wasn’t ideal, and so the island is being removed. Although the project was slated to take until the end of June, the contractor seems to be working quickly. After removing the palm trees that occupied the center, the curbing that defined the island and the soil that filled it were both swiftly taken away. In the last few days the long, skinny hole that remained was paved over. I don’t know if the entire street will get re-paved or simply re-striped, but either way I can’t imagine that it’ll take much longer. Except for the lack of lane striping, what I saw on my walk this past Wednesday looked smooth and ready to drive on: 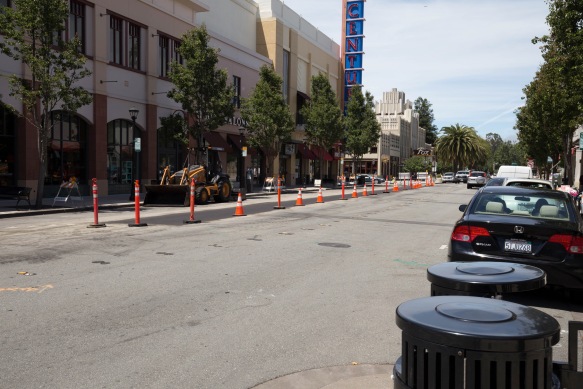 For a little bit longer, though, expect to detour over to Marshall if you are driving down Broadway towards Jefferson.

On the subject of changes to our streets, I was over on Brewster Avenue taking a look at Locale (the 133-unit apartment building on the corner of Winslow and Brewster) and was delighted to discover that Fuller Street, which used to dead-end behind the Locale building, now connects to Winslow! Unless you live or work in the area you aren’t likely to make much use of this brand new intersection, but nevertheless it cleans up a long-time dead-end that always seemed a bit odd. As a pedestrian I particularly appreciate the clearly marked crosswalk and concrete center islands that give those of us on foot a bit of extra protection while crossing:

Bravo! And thanks, Locale!

The main purpose of my downtown walk this week was to check on a number of projects, such as the above. Some, like the downtown Starbucks, have been dormant for quite some time. Thus, you can imagine my pleasure when I observed that crews are now actively working on refurbishing the space that previously housed a Le Boulanger. And just a block down Broadway, I was thrilled see the signs that have been pasted onto the construction walls at Broadway Masala:

The recent lack of visible progress had me worried, but these signs—and the one around the corner that in large letters pegs the return date as “Summer 2016”—are a great relief. I’m a fan of Broadway Masala and I’m eager to see them serving their guests once again.

On the subject of signs, I feel obligated to make an editorial comment. Signarama, on El Camino Real at Winklebleck Street (near Broadway) has been in this spot for a number of years. Wouldn’t you think that a company that is in the business of making signs would have a proper sign on their signpost, and not rely on a sagging fabric banner affixed to the building?

I actually took two long walks this week: one up to the cross in Emerald Lake Hills to gather material for an upcoming blog post, and one that took me from my house up to the middle of San Carlos and then all through downtown Redwood City to get some pictures for not only this blog post but for two others I have in the works. This blog not only keeps me busy, it continues to serve as a great motivator for me to get outside and exercise! While I don’t expect most of you to walk as much as I do, I do hope you spend at least some time walking around Redwood City’s downtown from time to time. There is a lot going on in our little city, and especially now, with our great weather and our wide selection of restaurants and shops to explore, our downtown is a great place to be.

The Fourth of July is rapidly approaching, and details on Redwood City’s parade, parade run, Independence Day Festival, and fireworks show can be found on the city’s website, at http://www.redwoodcity.org/residents/redwood-city-events/festivals-holiday-events/july-4th-celebration. As was the case last year, we won’t be able to put out chairs in order to reserve a parade viewing spot until after midnight the night before. That is, you can get there as early as you want on the 4th, but don’t plan to be putting out a chair on the afternoon or evening of the 3rd…