How do kids grow up without empty lots to play in any more? When I was a young boy, our neighborhood had two or three empty lots in which my friends and I could play. We rode bikes in them, slid down their hills on pieces of cardboard, climbed their trees, and fought imaginary “wars” using weeds with their attendant dirt clods as ammunition. We also spent countless hours building and rebuilding forts using whatever scraps we could lay our hands on. Our neighborhood dirt lots caused us to spend a lot of our days outdoors, and forced us to constantly be using our imaginations. All in all, local dirt lots were a paradise for a young child.

But that was California in the Sixties. By the mid Seventies those very lots I had happily played in had been developed. By then the prospect of an empty lot no longer held much allure for me—by then my thoughts were turning to cars, girls, and computers (yes, I’m a bit of a nerd), but the generation behind me must have been truly disappointed at the loss.

In Redwood City these days empty lots are a rare thing. When you do see one, it is likely the result of a building or house having been torn down, or it marks the passage of the Hetch-Hetchy right-of-way. One such lot that I’ve been watching for many years now sits very close to the city’s northwestern edge, at the corner of El Camino Real and Avondale Avenue. You may better know it as that dirt lot that is next door to the old Mountain Mike’s pizza place (or, depending upon your dining preferences, that empty lot across the street from KFC):

While I suspect that it is not the kind of place parents would be thrilled to see their kids playing in, due to its proximity to El Camino, this two-parcel lot has been sitting empty since the Texaco station that once fronted onto El Camino and the neighboring small house that once faced Avondale Avenue were torn down. While the parcel has been used off and on as a pumpkin patch (at Halloween time) and a Christmas tree lot, it seems that it wasn’t until 2003 that a serious development proposal for the site came before the city. Back then a developer proposed building a three-story mixed-use development (with offices on the bottom two floors and residential on the top floor), but for whatever reason that project never left the drawing board.

As you would expect from a site that once held underground fuel tanks, both parcels that make up the lot were contaminated. In early 2012 the tainted soil was removed and the contamination issues were remediated, rendering it safe for future development. This seems to have done the trick: in 2014 Regis Homes Bay Area LLC put together a plan to fit twelve townhouses on the .44 acre site, and in June of the following year they submitted an official development proposal to the City of Redwood City. On June 23, 2015, the Planning Commission approved the proposal. Between then and now, though, presumably while the developer was finalizing their plans and preparing to break ground, Regis Homes sold the project to SummerHill Homes (“SummerHill 150 ECR LLC,” for legal purposes). If SummerHill sounds familiar, it was they who developed the 141-unit “The Lane on the Boulevard” apartment complex: the one on the former Mel’s Bowl site at 2580 El Camino Real. (Helping to illustrate what a game of chess the real estate development business is, although SummerHill built The Lane on the Boulevard, in early 2015 they sold that development to Oakwood Worldwide, a corporate housing provider, for $84 million.)

For a year now—since the Planning Commission approved the project—I’ve been keeping a close eye on the site, watching for any signs of construction. They’ve mowed the weeds a couple of times (they just mowed again last weekend, as a matter of fact) and at one point a tractor dug some small holes, possibly for soil testing purposes. But otherwise the lot has continued to sit there, to the point where I was starting to wonder if this proposal, too, was going to wither and die on the drafting table. But at the City Council’s June 27 meeting the council approved a number of legal agreements with SummerHill that represent the next step in the process. It seems that the proposed project is indeed going ahead, under the name “The Towns at Avondale.”

As for what the project is, exactly, allow me to describe it. But first, a picture:

This rendering is from the plans submitted to the city a year ago by the original developer, but it appears that SummerHill’s final product will look something like this. Certainly, the documents that were approved at the recent City Council meeting seem consistent with the original vision of twelve for-sale condominiums on the site, and the site plan that was just approved matches up nicely with the site plan that the Planning Commission OK’d a year ago.

Speaking of that site plan, here it is: 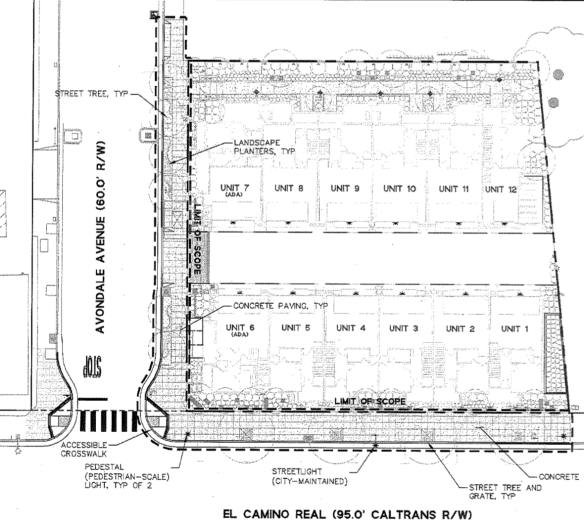 [tap or click the image for a larger version]

As you can hopefully see, the development will consist of two large buildings, each containing six condos. One building will sit up against the sidewalk along El Camino Real, and the other will sit parallel to it, separated from the first by a driveway that services the ground-level garages. Entry to that driveway, and thus those garages, is from Avondale Avenue. Note the bulb-outs that will be added to the sidewalk at the intersection of El Camino Real and Avondale Avenue: these will not only make the crossing safer for pedestrians, they will also slow traffic entering Avondale from El Camino Real.

According to the year-ago plans, each condominium will have three bedrooms, with the exception of Unit 12, which will only have two. Unit 12 is also unique in that it has a single-car garage plus a dedicated parking space alongside; all of the others are slated to have two-car garages. On the subject of parking, although the development has no room for on-site guest parking, it hopes to gain six new spaces along El Camino Real in front of the complex: currently the entire curb is painted red (except for the old gas station driveway, which will be eliminated), but the developer has requested that the curb be changed to white and six spaces be painted on the street. I should also note that residents will be required to keep their garages clear for parking; they cannot park on the street and use their garage for storage. This is all in an effort to satisfy the existing neighbors, who find the limited street parking on Avondale challenging enough as it is, without having to deal with guests of these twelve new homes.

All units have a small deck on the second floor, and units 7-11 have small patios through which you enter. The units that sit along El Camino have their front doors right on the sidewalk. Access to the other units’ front doors is via a private walkway that starts at Avondale and runs alongside the boundary fence. In the following rendering the two figures have just emerged through the gate that will provide access to that private walkway (here, the foreground street is Avondale, while a bit of El Camino can be seen off to the right):

As for size, Unit 12 is just over 1,600 square feet. The remaining units range from more than 1,850 to just under 2,000 square feet (Unit 6, on the corner of El Camino Real and Avondale Avenue, will be the largest, according to the early plans).

All in all, the condos seem to have nice layouts, and if what SummerHill builds looks anything like these renderings, the exteriors should be pretty attractive as well. Whenever I look at a project like this I try to look at it as a prospective customer: is this something I would be interested in? The first residence my wife and I ever bought was a townhouse-style condo in Fremont, so I’ve lived in a multi-level place like this. We certainly liked it then, so I expect that there will be a lot of interest in these. I should note that as I get older, and as my wife and I spend more time assisting elderly relatives, the thought of all those stairs looms ever larger in my mind. Physically I’m fine with them now, but in ten years or so, who knows? For that reason these days I wouldn’t buy one of these over a place that has all of its primary living space on one floor, but as I said I can certainly see the appeal for others.

The sizes—both in square footage and number of rooms—are great; they should be quite comfortable as a primary residence. The location isn’t bad, either: it is only a quick jaunt by car to Highway 101, and the distance to the Redwood City Caltrain station is 0.8 miles, which is an easy walk or bike ride (it’s about 25% shorter than the walk I made every day for years between my house and our Caltrain station).

Finally, the fact that these are for-sale units is a real plus, given the preponderance of rental units being constructed around here lately. All in all, as an adult I’m pretty pleased with this proposal, and look forward to no longer seeing that empty lot at 150 El Camino Real. Of course, the kid in me despairs at the loss of one of the very few empty lots that isn’t fenced and that could be used to host the kind of imaginative play that I grew up with. But we live in a different world, and housing is scarce: the need for this kind of project outweighs the need for an empty lot. I think.

3 thoughts on “A Lot to Remember”