This week’s City Council meeting was a nice change. Perhaps the two most interesting items on the agenda were these:

Ah, summer: when things are relaxed and easy, and for a brief moment the Council doesn’t have to deal with any really thorny issues. Somehow the meeting still went on for just shy of two and a half hours, but I’m sure that the Council members looked forward to this meeting. I know I would have if I had been on the Council.

As if to mirror their meeting, it’s been a relatively quiet week in Redwood City, at least from my viewpoint. The various projects underway continue to make progress; I’ll update you on a couple of those in a bit. But first, there is one new project in the works: a three-story, ten-unit condominium building that has been proposed for 910 Woodside Road. This project popped up on the city’s project list a couple of weeks ago and is now taking its first steps by going before the Architectural Advisory Committee (AAC) on August 18 (at 7:00 p.m. in the City Hall Council Chambers, if you are interested in attending). If and when the AAC is satisfied with the project, then it will go before (I believe) the city’s Zoning Administrator for project approval. That will likely take place toward the end of this year.

Today, 910 Woodside Road is the home to Thaibodia, a restaurant that specializes in Thai and Cambodian cuisine. This project, if approved and constructed, will replace that restaurant and its parking lot with what are essentially two parallel rows of five condominiums each—although at the Woodside Road end it will appear as if the whole is a single monolithic building. At the ground level there will be a wide garage door in the center that leads to the alley between the buildings (through which homeowners will gain access to their garages). On the second and third floors, the two condos at the Woodside Road end will reach out above that garage door and touch, presenting a single monolithic facade and allowing those two condos to be larger than the rest. Thus, you can think of the building as being U-shaped, with the mouth of the U facing away from public view. This rendering, included with the preliminary project plans, is what the design would look like from Woodside Road:

The condos are three-story units, with a two-car garage and a single bonus room on the ground floor of each. The second level consists primarily of a single large room that serves as kitchen, dining room and living room, plus a full bath, a laundry closet, and a balcony. The third level is where the various condominiums really start to differentiate themselves. The two rearmost units have only a single bedroom and bathroom on this level, making them one-bedroom, two-bathroom condos. The remaining four units on the right side of the building (as viewed from Woodside Road) each have three bedrooms and two full bathrooms up top, while the four on the left have only two bedrooms and two full bathrooms on the uppermost level.

It is an unusual design, to say the least. As proposed it has a metal standing-seam roof with numerous skylights throughout. Four sections of the roof—in the rendering they are shown to be flat, with extra-thick black edging—are intended to be “green”. That is, they’ll be topped with six inches of “planting media” which will host live plants of some sort. That green roof, which will total just over 1,400 square feet in area, will have drip irrigation but is anticipated to capture 80% of the average annual runoff from our occasional rainstorms.

Because this project has yet to go before the Architectural Advisory Committee, I expect that the design will change somewhat before it is finally approved (assuming that it is approved). I will be very interested to see how many of the original design elements survive the review and approval process.

I see a number of similarities between this project and the twelve-unit one that should soon break ground at 150 El Camino Real. I last wrote about that project in A Lot to Remember, and since then there has been no visible activity on the property. Actually, that’s not quite true: just a couple of days ago workers enclosed the property with chain link fencing. It may in fact be construction fencing, signaling that groundbreaking is just around the corner. But I suspect that in reality it may just be a way to keep people from dumping their cast-offs on the property. For a while now there have been two of those “charity bins” on El Camino Real side of the parcel, and lately someone dumped a bunch of rubbish next to the bins. After a couple of days that rubbish was cleaned up, and one of the bins disappeared. Not too long after that, the fence was installed. Which, I was amused to see, they installed in such a way as to render the remaining bin inaccessible:

About two weeks ago I dropped by to observe the progress on the office building being constructed at 550 Allerton Street. I watched a steady stream of cement mixers arriving at the site and pumping their contents: the contractors were doing a “big pour” of the entire bottom floor of the building’s underground parking garage:

I dropped by again this week and now, with that floor hard enough to walk on, they’re working on the supporting pillars that will hold up the upper level of the parking garage—and indeed, the entire building.

After looking in on 550 Allerton this week, I also took a peek at the 815 Hamilton Street project. This is the five-story office building that will rise up right behind the Fox Theatre (and right next door to Cafe La Tartine). Schedule-wise it is just a bit behind 550 Allerton: they appear to be just wrapping up the rebar that will be embedded in the concrete floor of the lowermost parking level. Thus, a “big pour” should be happening there soon:

This underground garage will eventually connect to the garage beneath the Century Theatres building (that garage actually extends beneath Theatre Way); at some point there will be construction in the theater garage to make that connection.

As long as I’m on the subject of parking, I’ve been watching for the promised electronic “garage capacity” signs that are supposed to go up on the Century Theatres garage and the Marshall Street garage. The Crossing 900 (“Box”) building garage already has these signs; they are activated when that garage is made available to the public (on nights and weekends) to let motorists know just how many empty spaces remain. Putting such signs on the two public garages will go a long way towards preventing us from having to make that fruitless search for an empty space that we experience today during particularly busy times. In any case, one of the signs went up about two weeks ago. You’ll find it on the Marshall Street entrance to the Marshall Street garage: 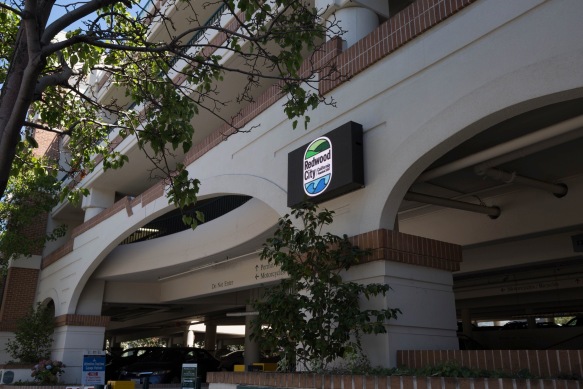 When I was there the sign was only showing the city’s logo, so either the sign is not yet fully operational, or it is only activated during certain hours. For some reason this is the only sign yet installed: there isn’t a similar one on the Broadway entrance to this same garage, and there isn’t one (yet) on the one entrance to the Century Theatres garage. But by following the conduits leading to and from the sign I was able to locate the sensing equipment, and I determined that that equipment, at least, has already been installed both at the Broadway entrance to this garage as well as at the entrance to the Century Theatres garage. I was interested to note that rather than putting up sensors throughout the garages to note the presence or absence of a vehicle in each individual space, this system appears to rely entirely on a pair of cameras: one looking at the entrance lane and one looking at the exit lane. Apparently they are simply counting cars as they come and go, and using that information, along with the garage’s capacity, to calculate how many empty spaces should be available.

Finally, I’ve been keeping a watchful eye on Broadway Masala. Although it appears that someone is occasionally dropping by the work site and moving a few things around, I’m disappointed to report that work has essentially stopped (from what I can see): trenches have been dug and new sanitary sewer pipes have been put into those trenches, but the trenches have remained open now for a couple of weeks, at least:

No other visible progress is being made. The last couple of times I’ve dropped by to check on progress there have been no workers—or anyone else for that matter—there. So those signs on the construction walls that proclaim that the restaurant will reopen “Summer 2016”? Not gonna happen. They’ll be lucky to open by the end of this year, I’m thinking.

It is summer, and as I walk around the city I get the feeling that everyone is a bit relaxed and not rushing quite as much right now. Soon it will be fall, though, and things will kick back into high gear. At least, that’s the way it feels, although in reality there probably is little difference between the seasons, at least as far as construction projects go. I’m enjoying the relative quiet, as one should do during the traditional vacation period. Hopefully you all are enjoying our Redwood City summer too!

As I walked past Sequoia High School last Tuesday I noted that the San Francisco Shakespeare Festival was beginning to set up for the series of free performances they’ll be putting on starting this weekend. If you haven’t gone to this before, I can highly recommend it. The performances are top-notch, and being able to enjoy a Shakespeare play on a warm summer’s afternoon or evening is a real privilege. This year they are performing The Winter’s Tale. There will be six performances: one each at 7:30 p.m. on Saturday, August 13, 20 and 27; and one each at 4:00 p.m. on Sunday, August 14, 21 and 28. The performances are free, but you’ll need to bring your own chairs. The stage is located on the large lawn in front of the High School: enter through the gates at the corner of El Camino Real and Broadway. For more information, check out the city’s website.

1 thought on “The Lazy Days of Summer”