On Tuesday, knowing that we wouldn’t hear any sort of election results until the evening at the earliest, I decided to take a nice, long walk as a way to keep my mind off things. Of course, as I write this on Friday afternoon, we still don’t have definitive results of a number of national, state, and local races (including Redwood City’s City Council District 3, where, as I write this, I see that Lissette Espinoza-Garnica has now pulled slightly in front of incumbent Janet Borgens), as well as ballot propositions. At the time, taking a long walk (11 miles, as it turns out) seemed to be a good idea, and indeed it was. The weather was absolutely perfect, I got some great exercise, and I was able to check in on some of Redwood City’s more interesting projects.

First, though, a week or so ago my wife and I were out driving our usual Meals-on-Wheels route in Redwood City, which covers downtown and some adjacent areas. We were over in the alphabet streets (north of Whipple Avenue, and east of the Caltrain tracks) when my wife suddenly sat up and exclaimed “Did you see that?” It seems that I had just driven past a person out walking their pet pig. I must say, that in all my years of walking through Redwood City, I’ve seen plenty of people walking dogs, but never a pig. That particular neighborhood is as solid a suburban neighborhood as they come, and is the last place I’d expect anyone to be keeping a pig. But then again, there are a few Redwood City residents who keep chickens in their back or side yards, so perhaps a pig shouldn’t come as much of a surprise.

The thought of someone regularly taking their pig for a walk struck me as funny, but I didn’t give it too much more thought than that. Until I took my walk this week, that is, when I saw this:

Yep, that’s a woman taking her large (giant?) tortoise for a walk. I briefly followed them along Alameda de las Pulgas, after which they turned onto Kensington Road. As best I can tell she was using something akin to a paddle (or a flat snow shovel) to direct it — or at least to serve as a blinder to keep the tortoise from being distracted by cars and such. The tortoise was moving at an impressive clip, at least for a tortoise, and seemed happy walking alongside his owner.

First a pig, then a tortoise. Only in Redwood City, eh? What a unique place Redwood City truly is.

After they turned I kept going: my goal was to walk along Alameda de las Pulgas all the way to Woodside Road, then follow Woodside Road down to where Woodside Road meets Broadway so I could check up on the Broadway Plaza project. Along the way, though, I checked in on the 10-unit condominium project under construction at 910 Woodside Road, where Thaibodia restaurant once stood. It took quite a while after the project was approved before Thaibodia finally closed and the building was torn down; so long, in fact, that I had given up on the project several times in the interim. But after more than three and a half years, visible progress on the project began to be made, and now the project is humming right along. The new building’s foundation seems to have gone in quickly, and now framing of the first floor is well underway: 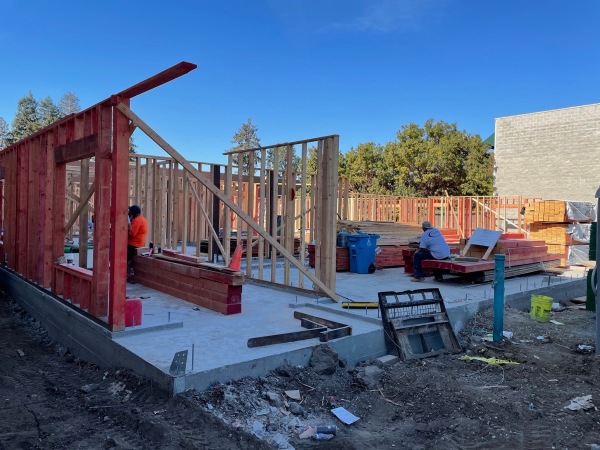 I won’t re-describe the project here; if you want to know more about what this building will consist of and look like, check out my post The Lazy Days of Summer (which I wrote prior to the project’s approval), or the page dedicated to the project on the city’s website.

Further down Woodside Road, I noted that the new Shell gas station at the corner of Woodside Road and Hudson Street, which replaced an older Shell station on that same spot, is apparently now complete and operating. In its new incarnation this gas station not only now includes a drive-through car wash, it also includes a “Loop” mini-mart. This is the second such Shell station in our area (the first is at the corner of El Camino Real and 5th Avenue, in North Fair Oaks), and one of many throughout the Bay Area. If you are curious, I wrote about that other Loop station, and its more-than-the-usual mini-mart back in early 2014, towards the end of my post Dining High and Low.

If you know me, you know that, I cannot visit that part of town without checking in on the project almost directly across Woodside Road, the Hallmark House Apartments building, at 531 Woodside Road:

As you can see, this building now has windows and some of its insulation. It shouldn’t be long before the exterior surfaces are applied.

The building’s 72 one-bedroom (not studio!) apartments, which are reserved for low-income residents, all have a private patio or balcony, walk-in closets, central heating and air, and electric kitchens. The building also features a number of amenities for its residents, including a swimming pool, a recreation room with kitchen, central laundry facilities, and a parking garage.

The units in the Hallmark House Apartments building are not yet for lease, and applications are not yet being accepted. However, the builder anticipates opening the building next spring, and now has a website (http://hallmarkhouseapartments.com), which they say will be updated with information, such as dates when the application process will commence, once they know more. Interested parties would do well to bookmark their website and check back often.

From this picture you can see what this new building will look like. The color palette is particularly interesting; possibly it is meant to give the building a more “natural” look, to better fit in with Redwood Creek, which runs alongside the building. Although I do not know when this building will receive its certificate of occupancy and open its doors to new residents, the studio, one-bedroom, and two-bedroom apartments within this building are now leasing to seniors earning no more than 50% of our Area Median Income. See the MidPen Housing website to apply, or if you have questions about leasing in this building.

I’m going to save the rest of what I saw on this week’s walk for a future post. Before I close, however, I wanted to give a mini-review of the latest incarnation of BottleShop, the wine bar on Broadway between El Camino Real and the Caltrain tracks. My wife and I had been big fans of this place in its previous life, so now that they are again open, under new ownership, we decided to pay them a visit. 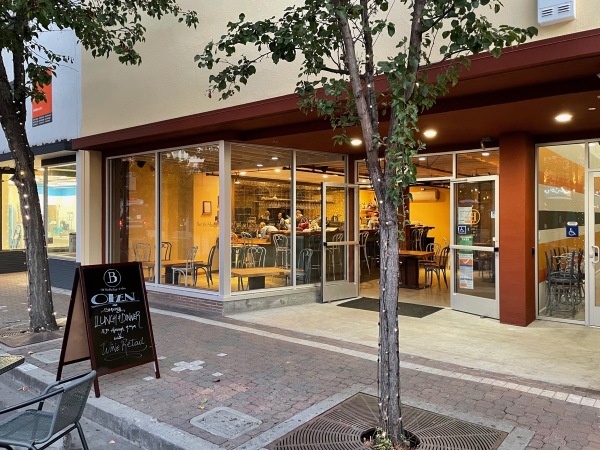 As before, BottleShop is first and foremost a wine bar. The interior is largely unchanged (although the couch seating is gone), and you can still buy wine by the glass or by the bottle (and, as the name implies, you can buy wine by the bottle to take home — at retail, not restaurant, prices). Unlike before, however, they now have a more substantial food menu.

Zu and his folks previously had some premium bar food — a lovely cheese plate, a wonderful selection of charcuterie, and some great focaccia. BottleShop still has cheese and charcuterie, if that’s your thing, but the night we were there the menu listed soup, a couple of salads, a pair of panini’s, and some actual entrees and desserts. My wife tried the “Not a Rack of Lemon BBQ Ribs” ($18) and pronounced them some of the best ribs she’s ever had. I tried the “BS Filet and Fries” (which they were quick to point out was not Filet Mignon, as if the price, at only $22, wasn’t already a tip-off). I liked it for what it was, and would definitely get it again. We also opted to split the “There’s a Rat in the Kitchen” Ratatouille, which was fine but not memorable; next time we’ll try one of the salads instead. Finally, we ended with a shared slice of their yummy house-made cheesecake, which marked the perfect end to a delightful evening.

Given that the place is called BottleShop, we of course had wine. My wife had the Hook & Ladder Chardonnay, while I had the Korbin Kameron Cabernet Sauvignon, followed by a glass of another Cab that the owners were thinking of carrying. BottleShop has a small variety of wines by the glass — three whites, four reds, and one rosé were on the menu that night — plus a number of other bottles, so almost everyone should be able to find something they like.

The seating was comfortable, which was good considering that we were sitting outside, among a set of safely-spaced tables located where cars used to park. Redwood City has used giant concrete blocks to separate the outdoor seating from the adjacent traffic lane, and we felt quite safe. In general the cars didn’t prove to be an annoyance, although at least one car, and a motorcycle or two, made quite a racket as they roared by.

Our check totaled out at $131, including tax but without the tip, which, considering that we each had two glasses of wine, seems somewhat reasonable for our area. We’ll certainly be back, and, who knows? We just might become regulars again.

Do check out BottleShop if this sounds at all appealing. Oh, and be aware that the rather abbreviated menu they currently show on their website is not at all what they are actually serving; stop by and scan the QR code on the tables to check out their full, current menu. BottleShop is open for both lunch and dinner, and for retail wine sales, from 11:30 a.m. to 9 p.m. (possibly seven days a week; neither their sign nor their website actually say). You’ll find them at 2627 Broadway in Redwood City.

Now that our weather is changing, I just wanted to point out that San Mateo County is now offering even larger rebates on rain barrels than before. These rebates are available now through the end of next June; you only have to be a resident of San Mateo County to qualify. Residents of Redwood City can get a $100 rebate on a barrel between 50-99 gallons, a $150 rebate on a barrel between 100-199 gallons, and a whopping $200 back for a rain barrel 200 gallons or larger. And if that isn’t enough, if you buy from BlueBarrel Rain Catchment Systems (who sells barrels plus all kinds of related stuff) they will also give you a 10% discount.

Anyone living in a single family home in San Mateo County can hardly lose with these deals. I purchased my two 50-gallon barrels from Orchard Supply Hardware some years ago and got the rebate; it was easy to apply for and worked great. And the rainwater we’ve gathered over the last couple of years has really come in handy in our garden. Hopefully my barrels will be filling up again soon…

10 thoughts on “Only in Redwood City”