Following on to last week’s rather lengthy and detailed discussion of the Hallmark House apartment building, this week I decided to take a walk and visit each of the major construction projects that Redwood City has specifically called out as allowed during our current shelter-in-place. (If this post seems a bit familiar, it is somewhat similar to my post Essentially Building. However, this post only looks at active projects, and includes a couple that I didn’t mention in that post. Plus, that post was written a month ago; there has been progress since then!)

I began with yet another visit to the Hallmark House apartment building; as I reported last week a representative from the company that owns the building said that they hoped to begin actual (re)construction of the building starting as early as last Monday. I went by on Tuesday, however, and wasn’t able to discern any evidence of construction. However, I’m still pretty comfortable in my belief that it will begin quite soon, if it hasn’t already.

Redwood CIty’s list of allowable projects consists mostly of multifamily apartment and condominium buildings in which at least 10% of the units will be affordable for residents earning at or below a defined income level (every one of Hallmark House’s apartments will be affordable, for instance), and projects that enhance the city’s medical facilities. Curiously, though, three projects on the list do not appear to fit those criteria. The first is just across the street from Hallmark House: the complete rebuild of the Shell gas station on the corner of Woodside Road and Hudson St. When I was there on Tuesday there was no active work going on, but since my previous visit the underground fuel tanks have been dropped into the holes that had been dug for them, and they’ve been covered with gravel:

After closely inspecting Hallmark House, I then headed to 330 Redwood Avenue, where the 36-unit Redwood Oaks apartment complex is undergoing remodeling: 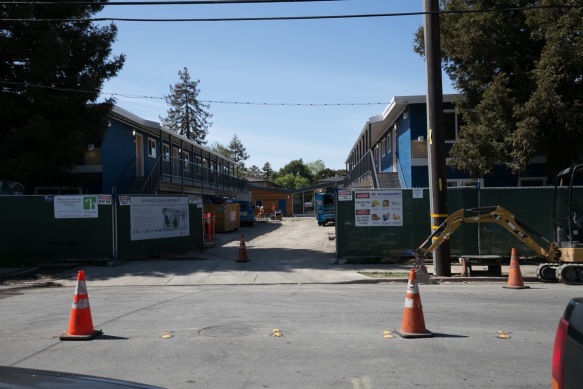 This complex is owned by HIP Housing (whose mission for over 40 years has been to “invest in human potential by improving the housing and lives of people in our community”). Like Hallmark House, each of the units in this complex will be affordable. The remodeling project involves not only spiffing up the individual apartments, but also the creation of a new community building for the residents. In the above photo, you can just make out this rather spiffy looking new building at the far end of the driveway.

Moving on, I walked down Redwood Avenue to El Camino Real, and then made my way over to Franklin Street so that I could get a good look at the goings-on at the so-called Greystar IV project at 1409 El Camino Real. This rather large apartment building just squeaked in under the wire, as far as approval to continue working goes: 35, or 10%, of the building’s 350 apartments are to be affordable at the Low income level.

This particular project has been going on for some time now. I’m glad to note that the El Camino Real face of the project has essentially “topped out”; the top floor of this eight-story building is now in place, at least on that side of the building. In the back, along Franklin Street, the contractors are still working to frame up that topmost floor. The following picture shows the building from Franklin Street: towards the right you can just make out the top floor, and towards the left you can see some of the walls that will help support the building’s roof. 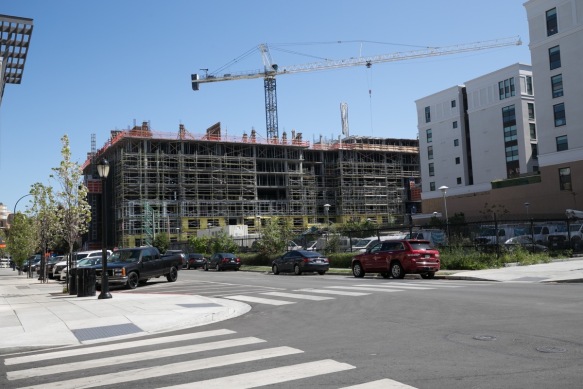 When completed there will be a couple of structures that will extend a bit higher than the eighth floor, but these will be hard to see from the ground level and will simply be there to house some of the building’s mechanicals. For instance, the building’s central boilers will be located on the roof, in an aptly-named “boiler room.” Know, though, that what you see today from El Camino Real represents the building’s nominal height.

From Franklin Street I headed downtown. First stop: the Habitat for Humanity project being built at 612 Jefferson Ave. With the utility work in the street seemingly complete, efforts by the (so far) small work crew are now focused on what will be the building’s foundation. This particular building won’t have any below-ground levels; all parking will be in a ground-floor garage. Thus, the excavation that is currently going on is presumably for the foundation and for any needed underground utilities, as well as for the “elevator pit.” But soon the garage’s floor will be poured and the building’s walls will start to go up.

As you can see the lot is narrow (49’) and somewhat deep (100’). In order to fit in enough parking for the building’s 20 for-sale condominiums (all of which will be priced for those earning at or below the Low income level) it will employ mechanical stackers that will squeeze 14 cars into the space that would normally accommodate eight. The garage will also have a 15th parking space, one that is handicapped van accessible. Although the majority of the ground floor will be consumed by the garage, it will also have a small lobby with an elevator and stairwell, a bike parking area and trash room, and some utility closets.

Almost kitty-corner to the Habitat project is the substantially larger Arroyo Green project, at 707 Bradford St. Work was well underway on this project when I was there: in the following picture you can just make out one of the workers on the top floor near the right side of the building. 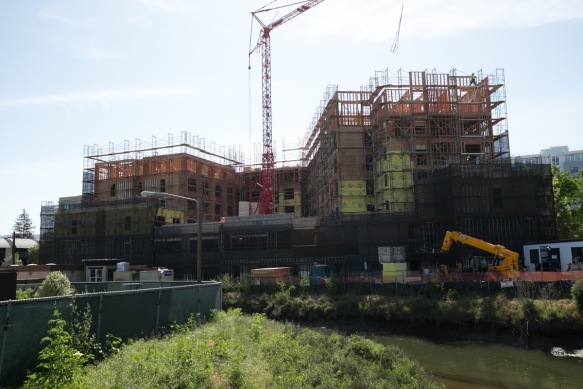 I believe that that top-right corner represents the maximum height (barring any walls or structures on the roof needed to hide or enclose mechanical elements) of this building, too. As you can see, though, that topmost floor was just barely underway as of Tuesday; most of the building had yet to receive the framing for the building’s seventh floor.

This building will consist of 177 apartments, all of which will be reserved for seniors earning at or below the Very Low income level. It will also include an ~8,000 square-foot daycare center on the ground floor (below where the tower crane is mounted) and an internal parking garage. The building’s common outdoor “plaza” will be located in the center of the building’s two wings, on the third floor (which is also the level where the residential units begin: below that floor is mostly parking garage, daycare center, and lobby).

I took the above picture from where Main Street crosses over Redwood Creek. From there it was a quick matter to cross Veterans Boulevard and look in on the 353 Main Street project, where a 125-unit affordable apartment building is to be built. I rarely see activity on this site, and this visit was no different: not only did I not see any activity, I saw nary a soul. But the site looked a bit different from my previous visit, so it appears that some work is being done. Perhaps they are (or were) just waiting for an inspection or something. Certainly the ground looks as if it has been well prepped for the construction of forms for the building’s footings:

Like the Habitat site this site, too, is long and narrow. It is quite a bit bigger than Habitat’s, however. The building will rise to seven stories (only six along the Main Street frontage) and will consist entirely of affordable apartments, half at the Very Low income level and half at the Low income level.

I’ll continue to watch this site and hope to catch some in-person action soon.

The next building I checked up on is Kaiser’s so-called “MOB2” (Medical Office Building #2) on their campus at the corner of Maple and Marshall streets. Although most of the work is now taking place inside, I could see clear evidence of work going on here:

Two other projects remain on Redwood City’s list of “approved” projects, but both of these were beyond what I was able to walk to that day: they are both in Redwood Shores. Thus, I took some time on Friday and drove out to Marine Parkway, off of which these two projects are located. Unlike the others, I haven’t been able to find out much about exactly what is going on with these two buildings. Clearly they were being remodeled — I saw plenty of construction activity — but for what purpose I have yet to determine. Here is the first, which is located at 1100 Island Drive:

(The above picture shows the side of the building, where the work was most visible; clearly the real work is taking place inside the building.)

The second building was practically across the parking lot, although it is actually located at 1200 Bridge Parkway:

From the outside of this building I could see no direct evidence of work taking place, but there were a number of contractor’s vehicles in the parking lot and I saw one guy cleaning a paint roller, so interior finish work is presumably taking place. From a glance at the list of companies that occupy (or at least once occupied) these buildings, I don’t see any that would warrant an exemption to the general construction ban, but perhaps they are being retrofitted for some future health-related function. I’ll keep an eye on these two; I’m guessing that the solution to the mystery will reveal itself in relatively short order.

I of course passed several other construction projects as I explored Redwood City this week, but those were pretty much all silent as you would expect. It is certainly nice to know, though, that our current pandemic is not having a serious effect on Redwood City’s ability to provide more affordable housing to its many deserving citizens.

That about does it for the major construction projects that Redwood City has approved for work during the shelter-in-place. I’m guessing it won’t be too long, however, before our current restrictions are modified to allow other construction projects to resume, as long as sufficient distancing can be maintained. I for one am looking forward to seeing some of our other major projects — new such as the large office building that has been fully framed at 851 Main Street — get back underway; I just hate to see half-finished buildings sitting idle.

For those readers of last week’s column who inquired about applying for housing in Hallmark House (and for anyone interested in possibly moving into any of these affordable housing projects, for that matter), I don’t believe that there is a waiting list for that project yet. However, I’m sure that when there is one the city will announce that fact, and I’ll echo it here. If you haven’t yet sent your contact information to the city, though, please read the following, which the city included at the end of its description of the 353 Main Street project:

Affordable Housing Notification List – If you would like to be notified about opportunities to apply for below market rate/affordable housing units for rent and/or for sale within one of the new developments currently under construction, please email housingrwc@redwoodcity.org to provide your contact information.  You will be notified when the developer begins marketing the affordable units and accepting applications.  You will need to submit an application directly to the property management company of the property you are interested in as the City does not accept applications.