School may have already begun, but summer isn’t quite over yet! According to the meteorological definition, the last official day of summer is August 31. And although summer vacation season may well be over, Redwood City isn’t quite ready for fall. As I write this, this year’s Music in the Park series has just wrapped up, but Music on the Square still has two more concerts to go: Friday, August 24, and Friday, August 31, both from 6 p.m. to 8 p.m. And Movies on the Square will present one final showing: Black Panther on Thursday, August 30 starting around 7:45 p.m. Finally, you still have one final weekend to see Shakespeare in the Park: this year they are showing A Midsummer Night’s Dream on Saturday, August 25 starting at 7 p.m. and on Sunday, August 26, starting at 4 p.m. All of these events are free, and I highly recommend any or all of them.

Music in the Park is held each summer in Stafford Park, on Hopkins Avenue between King Street and Lowell Street. With the summer coming to an end and traffic patterns getting back to normal, some visible progress is being made on the Hopkins Avenue Traffic Calming Project. This project is still in the design phase, and just this week folks from our Public Works department used white spray paint to mark the street where traffic islands might someday appear. The purpose of these markings, as I understand it, is to enable members of the design team to show residents along Hopkins just what might be coming to their part of the street, and to then get feedback on the proposed changes from the residents. Once the project team has finalized their design, it will be presented to the City Council along with the corresponding construction budget. Only if and when the Council approves money for the project would it then be built. Currently, the assumption is that the project would be built just about a year from now.

Infrastructure projects typically take a long time and often cost a lot of money to implement. One such project that seemed to go very quickly (and that seemed to be implemented pretty cheaply), is the Peninsula Bikeway. This project mostly flew beneath my radar, but recently I noticed new Peninsula Bikeway signs on Hopkins Avenue at Duane Street. The Peninsula Bikeway is (or will be; I’m not sure how much progress the other communities have made) a well-marked route between Redwood City’s border with San Carlos and the far end of Mountain View.

The bikeway is a project of the Managers Mobility Partnership, which is an agreement between the managers of Palo Alto, Mountain View, Redwood City, and Menlo Park, plus Stanford University, to “work jointly to address the transportation and mobility challenges facing the region in the wake of population growth and economic expansion.” The goal for the bikeway is to more closely link the four cities, with the hope that it will someday span the entire peninsula. The initial route follows existing bikeways on local streets, but the desire is to someday develop a more direct route (think El Camino). For now, though, the new Peninsula Bikeway is a fairly safe path along mostly quiet streets, implemented entirely with signs plus markers in the roadway.

To get a proper feel for it, I followed the roughly three-mile route from one end of Redwood City to the other. Normally I do my investigations on foot, but it seemed only appropriate that I do this one by bike. Therefore, I hauled out my long-unused bicycle, dusted it off, pumped up the tires, and checked the gears and brakes. After donning my helmet, I headed off to where Warwick Street crosses Cordilleras Creek. 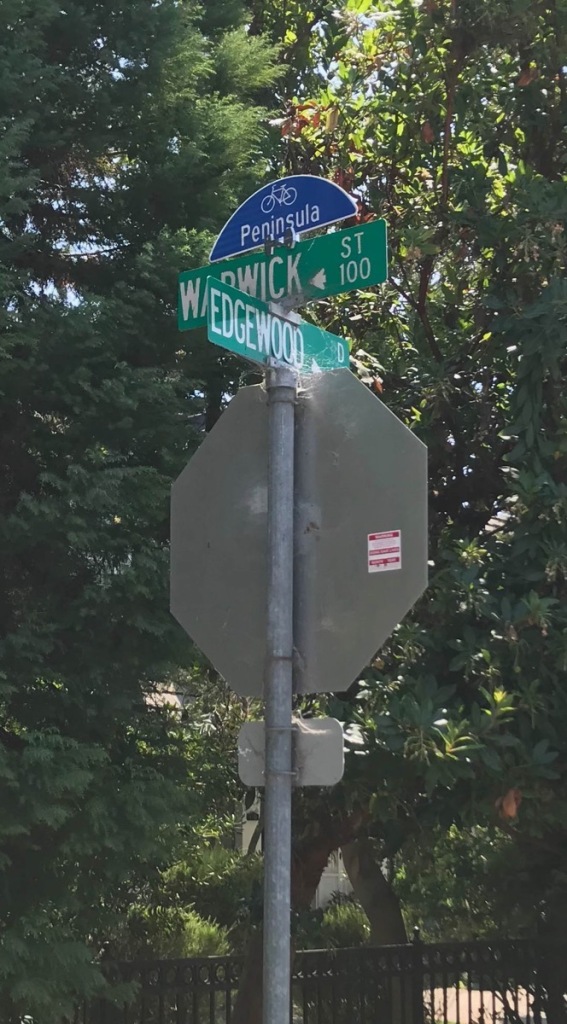 Cordilleras Creek serves as the boundary between Redwood City and San Carlos, and currently is the northern end of the Peninsula Bikeway. There isn’t yet a permanent sign marking the start of the bikeway, but head south on Warwick and you’ll see one between Edgewood Road and Arlington Road. Along the bikeway watch for signs with a blue “topper”: a dome-shaped blue sign with the image of a bike and the words “Peninsula Bikeway” (or just “Peninsula”) on top. They’re placed above official bikeway signs of course, but also atop many regular street signs, assuring the rider that they are on the correct route. Sometimes you need to look carefully to see the signs—the toppers are aligned in the direction of travel and don’t always face you—but whenever the path makes a change of direction, additional signs clearly indicate what you are to do. Significant points of interest that don’t lie along the bikeway—for instance, Redwood City’s Transit Center—are also called out by these “wayfinding” signs. And these signs helpfully include the distance to the named destination along with an estimate of the time needed to ride there.

The route through Redwood City jogs back and forth a bit. You’ll almost never find yourself in a striped bike lane; the streets are mostly quiet residential ones that you share with vehicular traffic. Of course, the bikeway cannot help but cross a handful of major thoroughfares. Whipple is no problem: the bikeway crosses at a four-way stop. Jefferson Avenue, though, proved a bit of a challenge. The chosen route uses Cleveland Street; at Jefferson and Cleveland there is a marked crosswalk but no nearby signals of any kind to stop traffic. Personally, I chose to walk my bike across the street there.

At Woodside Road, there is a signal (you cross at Hess Road and then jog over to Cypress Street), but signs recommend that you walk your bike. Given my experience, that is very good advice indeed.

The southern city end of Redwood City’s segment, at Selby Lane, comes as a bit of an anticlimax. Because Atherton is not one of the four original participants in the project, the Peninsula Bikeway signs end there. To continue on, ignore the large “Bike Route” sign that directs you towards El Camino Real and instead turn right and follow Austin Avenue, then Elena Avenue, to Valparaiso Avenue. At this point you’ll be in Menlo Park, where the bikeway signs should resume. Me, I turned around here and followed the bikeway back north.

I really enjoyed my ride and suggest that, if you have access to a bicycle, you spend one of these last few days of summer by riding the new Peninsula Bikeway. My trip involved a bit of investigation, but once the bikeway project is complete you shouldn’t have much trouble following the route: there will be markers in the pavement that should help enormously (and you can find a set of maps detailing the entire route here). Today the bikeway follows an interim route that seems good for commuting and casual riding, but Redwood City hopes to someday build a physically separated bike lane along El Camino that will become the permanent route: a route that is not only more direct but also provides easy access to shopping and other Redwood City destinations. If and when that day comes, I’ll dust my bike off once again and do something that today is unthinkable: ride my bike on El Camino Real.

I should note that there will be a “Launch Event” for the Peninsula Bikeway on Saturday, September 8 from 10 a.m. to 2 p.m., in Menlo Park’s Burgess Park. There will be food trucks and events for both kids and families, along with, of course, rides to celebrate the official opening of the bikeway. They suggest that you RSVP on Facebook, or you can simply show up and join in the fun. For more information, check out the Peninsula Bikeway web page.

The Veterans Memorial Building/Senior Center-YMCA project is taking the next step in the long process that, if successful, will result in the construction of a new Veterans Memorial Senior Center Building. At this time the City is requesting input for the Environmental Impact Report—the EIR. An EIR details the significant environmental effects of a proposed project, identifies ways in which those effects might be minimized, and lists reasonable alternatives to the project. The actual EIR will be written by the City, but before that can be done, the scope of the EIR—the areas in which the project might possibly impact the environment and the surrounding community—must first be determined. If you feel that this project will have particular impacts that should be addressed in the EIR, or simply want to make comments on what should be in that document, you have until the close of business on September 25, 2018 to submit your feedback, in writing, to the City. For more details, see the Notice of Preparation.

10 thoughts on “Clinging to Summer”