I haven’t recommended the “myRWC” app lately, but today I was reminded of just how useful it can be. There are a number of things you can do with this smartphone app (available for both IOS and Android), including paying your water bill or registering for a class at the Red Morton Community Center. But the number one reason to use the app—the reason that spurred me to write about it today—is that you can use it to very easily report issues you encounter throughout the city. (No smartphone? No problem. The app’s services are also available from any web browser; just go here.)

Notice glass in the street? Encounter an abandoned shopping cart? Have a noise complaint? Notice that a sign needs replacement or repair? Report them all quickly and easily with the app. In my case, I was heading back from double-checking something for an article I was writing, and noticed a pothole on Hopkins Avenue. The pothole wasn’t terribly deep, but there were some fist-sized chunks of asphalt in the street that might have done damage to a passing car. Remembering the myRWC app, I whipped out my phone, called up the app, and tapped the large blue “Request a Service” button right at the top of the screen. I scrolled down to “Pothole” and tapped it, which then brought up this screen:

I elected not to add a photo, but I tapped Issue Location and, as you might expect from a smartphone app, I was able to use my current location as the place where the problem was. I provided a brief description and checked the “Is the pothole located in a lane of traffic?” option—it was—but didn’t bother to estimate the width of the pothole; that was optional. Finally, I submitted my request. The app did ask me if I wanted to log in, but I didn’t bother; the login is not necessary, and I was in too much of a hurry to look up my password.

After submitting the issue, I sat down at my computer and began working on my article. I wasn’t sure how long it might take the folks from Public Works to respond, but I was content with having done my part: I had submitted the issue, which was then presumably in their work queue. Imagine my surprise, then, when less than an hour later I realized noticed a two-man crew on the scene, already at work getting the pothole ready for patching. They were probably there for all of about 15 minutes; when they left the debris had been cleaned up and the hole had been neatly filled.

I cannot guarantee that you’ll get service so promptly—especially if you report an issue at, say, 2 a.m. (you can of course report issues at any time of day or night, 365 days a year). But if my experience is any indication, our Public Works department is working hard to respond quickly to issues that we report—and you can’t ask for much more than that! If you don’t have the app on your smartphone already, I highly recommend that you install it spend a bit of time learning what you can do with it. You probably won’t use it a lot, but when you need it, I can attest that it is very convenient. And, honestly, I’m not sure I would have gone to the trouble of reporting today’s pothole if the app hadn’t made it so easy.

My wife and I are some of those rare Redwood City residents who don’t actually have cable TV. I guess we are considered to be “cord nevers” (people who have never had cable)—although many years ago, when we were living in an apartment we did have it there. In any case, we don’t watch very much “real” TV at all. We used to only watch broadcast TV (using a rooftop antenna), plus videotapes (later, DVDs). These days, like seemingly everyone else we get some of our media over the Internet. But not having cable means that practically the only time we see cable TV shows is when we are traveling. And what do we usually watch? HGTV: Home & Garden Television.

We get a kick out of some of HGTV’s home remodeling shows, including Fixer Upper. That show follows Chip and Joanna Gaines as they locate and then remodel homes in the Waco, Texas area. I find that I can relate to Chip Gaines: not only does he enjoy the remodeling process (he’s the contractor, she’s the designer) but his favorite part of the process, one that he loves to make a big deal of on the show, is “demo day.” That is the day when demolition commences on the part of the house that is to be remodeled. Chip, like me, gets a kick out of demolition. Oh, and we both also enjoy the rebuilding part, too.

This week we’re getting a “twofer”: two different projects along El Camino Real in Redwood City are simultaneously undergoing demolition. And I actually found myself with a bit of time to sit and watch both.

First off, the now empty Honda Redwood City dealership is rapidly being reduced to rubble. I went by on Wednesday and sat watching for a while as a large backhoe was separating out the elements of the old parts building, of which nothing was left except for the foundation slab. I watched with glee as the backhoe piled up bits of metal and then crushed them into a more compact form. Nearby were separate piles of wood and concrete; the wood and metal will likely be hauled away for recycling, whereas the concrete may well be ground up and reused on site. 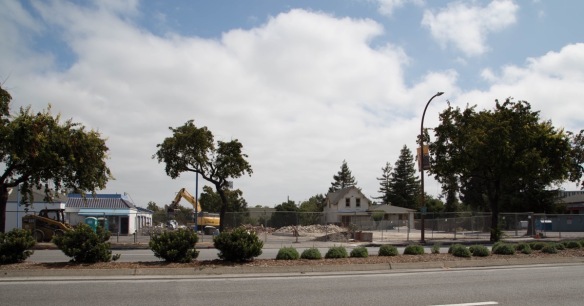 Once those piles are cleaned up, I expect that the vehicle showroom and service building will rapidly be reduced to its component parts. In short order the entire site will be re-graded, after which work will begin on the 33-unit 601 El Camino Real townhouse project that will soon occupy this site.

A couple of blocks down the street is the second El Camino demolition project. It has been about two years since Treadmill Outlet moved to Menlo Park and Sequoia Veterinary Hospital moved to San Carlos; since then just about all of the buildings that stood where the 1409 El Camino Real project is going to be built have been sitting empty. Regardless of how you or I feel about the 8-story apartment building that will soon rise on this spot, we can probably all agree that the sight of a handful of empty retail spaces slowly deteriorating in such a highly visible location on El Camino Real was not a plus for Redwood City. As of today, though, they are mostly no more.

On Wednesday of this week I sat for a while and watched two backhoes cleaning up the site. At that time there was only a portion of the Veterinary Hospital still standing (along with their sign), plus two small graffiti-covered concrete block buildings that will soon be taken down.

By the time you read this, everything will likely be gone. Note that the Security Public Storage buildings will remain; the 1409 El Camino Real project doesn’t extend to that property. But as you can now see, the project will extend all the way back to Franklin Street. The old W. L. Butler headquarters building that used to stand back there was the first building to go.

I’ve talked about the 1409 El Camino Real project many times before, so I won’t dwell on it here. In short, though, it is the sister to the seven-story 1305 El Camino apartment building (“Huxley”) that is now in the pre-leasing stage. 1409 El Camino will have a roughly similar look to its sister when viewed from El Camino Real, but because the property is so much larger, it will have more than twice the number of apartments: 350, vs. Huxley’s 137. And although 1409 El Camino Real will be eight stories tall, because of the way the two buildings are designed it will only be slightly taller than its next-door neighbor.

Demolition is the very first physical step for most development projects in our area, given that there is very little open land left to build on and thus new buildings usually replace old ones. It is a short step, though, given the tools and techniques contractors have these days. At one time many buildings were taken down by hand, and usable parts were carefully set aside for reuse. Then, there came a time when demolition consisted of just destroying the buildings with heavy equipment and hauling everything off to the landfill. Nowadays we still use heavy equipment to knock the buildings down, but we carefully separate out the component pieces—wood, metal, concrete, primarily—and recycle or reuse them. This makes for a swift demolition process that nevertheless minimizes what gets hauled off to the landfill. Metal can be melted down and used again. Concrete can be ground into small pieces that can be turned back into concrete. And wood, well, it can easily be disposed of. As you can tell given the rapid pace with which the buildings that stood in the way of these two new housing projects are (or were) taken down, contractors have demolition down to a science. And that’s a science I can get behind.

As Chip Gaines loves to say, “It’s demo day!” here in Redwood City. And that signals new beginnings for two large properties on El Camino Real, properties that will soon sport additional much-needed housing. Yes, for the most part it won’t be inexpensive housing, but at long last we’re finally going to see a project built—1409 El Camino Real—that will contain some measure of affordable housing. These 35 units, aimed at those earning at the Low Income level, aren’t much given the magnitude of our affordable housing problem, but they’re a start. And there’s a lot more to come very soon now, between the 707 Bradford Street project (117 affordable units for seniors at the Very Low Income level) and the 612 Jefferson Avenue project (Habitat for Humanity: 20 affordable units at the Low Income level). I’ll be cheering for those (and, with the Habitat project, hopefully participating) but both are being built on—can you believe it?—empty lots, so don’t expect to see any demolition.