As someone who spends a lot of time walking around Redwood City, I am acutely aware of the impact that our various in-development projects have on the pedestrian. They often impact motorists—most projects seem to need to cut into the street in order to connect to utilities, for instance—but the developers seem to work hard at minimizing the impact that their projects have on the street. I was a bit surprised to see how much utility work the 12-unit townhouse project at 150 El Camino Real (next to the old Mountain Mike’s pizza restaurant) needed; that project was actually held up for quite a while as that utility work was being done. And the final stage of construction of our rebuilt Burger King seemed to involve rather extensive utility work: there was a lot of trenching along and across El Camino Real that went on for weeks. Given how that project involved the replacement of an existing Burger King with another, somewhat smaller one, I would have thought that the utilities that were there would have been sufficient. Perhaps, though, they wanted to take the opportunity to replace the water lines and sanitary sewer lines, to ensure that they wouldn’t have to be replaced at a later time, when they actually begin to fail.

Regardless, the disruption to the street for the Burger King project was limited to a couple of weeks, and only during working hours: at the end of each work day the trenches were covered by large metal plates, allowing traffic to run unimpeded during the off-hours. That wasn’t the case for we pedestrians, though: the sidewalk in front of the Burger King (and the large apartments being built on El Camino just south of Jefferson) was closed for the entire duration of the project. At times, especially with the Huxley apartment building at 1305 El Camino, navigating that section of the street on foot was pretty tricky. Because the safe pedestrian crossings across El Camino Real are few and far between, crossing over to the other side of El Camino was often not a great option. I usually diverted to Franklin Street, although it had its own challenges: the still-under-construction project at 103 Wilson means that a section of Franklin’s sidewalk remains closed, and because the 1305 El Camino project involved the reconstruction of both Wilson and Diller Streets between El Camino and Franklin, well, pedestrian-wise things got very tricky indeed. On occasion I observed people walking in front of the 1305 El Camino project right in the street, but given the amount of traffic on El Camino Real I elected not to do that.

1305 El Camino is finally about done, so the sidewalk is once again open to the pedestrian. But as it has finished up, the next-door project at 1409 El Camino Real (also a multi-story apartment building) is getting underway, so the east-side sidewalks in that particular block of El Camino will soon be closed off by construction fencing. Expect the sidewalk there to be closed for up to two years…

I’m used to having to put up with this kind of disruption, so imagine my surprise when I saw that the project at 851 Main Street, which has just begun and is currently in the demolition phase, actually built a temporary sidewalk in the street parking area in front of the project. Large plastic barriers topped by chain-linked fencing enable the safe passage of pedestrians, while also allowing a close-up view of the project: 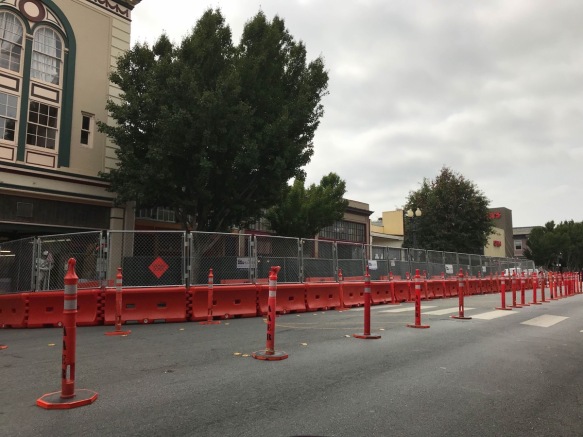 This particular project involves a historic element. The way the building is designed it appears to be three storefronts—and up until recently it was indeed occupied by multiple restaurants—but it was built back in 1922 for Clifton Motors, a Chevrolet dealership, and originally it was all one large showroom space inside. That historic portion is being largely retained, although it will be cleaned up and restored to close to its original condition. The historic section will continue to be a retail space; it will sit in front of the office portion of the new building (which will be set back so that the roof of the historic portion could be fitted out as a terrace). Here is what it will look like from Main Street:

Behind the Clifton Motors building was a large corrugated metal “shed” that actually opened onto Walnut Street; I believe that this building was used for automobile servicing. It wasn’t a very attractive structure, however, and fortunately doesn’t appear to have had any significant historic value, so it was swiftly torn down, thus opening up the back side of the property (which is where the underground garage entrance and exit will be):

I’m excited that this project is moving ahead: it has real potential to help activate Main Street, and will also provide some nice benefits to Walnut Street as well. The Walnut Street side is rather attractive in its own right, and the wide sidewalk, new lighting, and street trees will bring a lot to the area. Here is a rendering of the Walnut Street side: 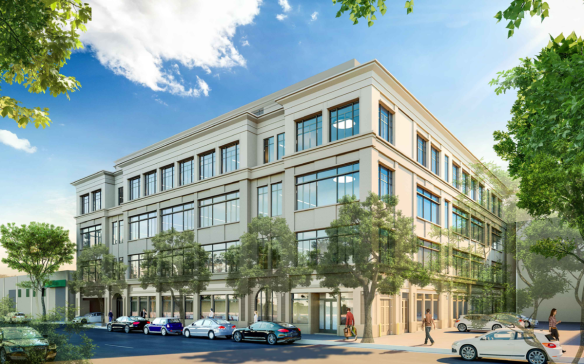 On the subject of sidewalks—something I’m clearly interested in!—I was delighted to see that the one-block section of Alameda de Las Pulgas that has been missing a sidewalk for years is finally getting one. This section, which is between Brewster and Harding, recently had two new homes built along it, and part of the agreement with the city was that the developer would set aside monies towards this sidewalk project. At its August 27 meeting the City Council approved a lengthy “consent calendar” of items (generally, non-controversial items that are together approved with a single vote), one of which awarded a contract for the construction of this particular section of sidewalk. It will cost between $350,000 and $400,000 but will result in a much-needed section of sidewalk along Alameda de Las Pulgas. I walk through there quite frequently, and although there is (now) a reasonably wide dirt strip along which one can walk (if there aren’t cars parked in the strip, which there often are), it still feels a bit unsafe, given that there is no physical separation between pedestrians and the cars passing northbound on Alameda: 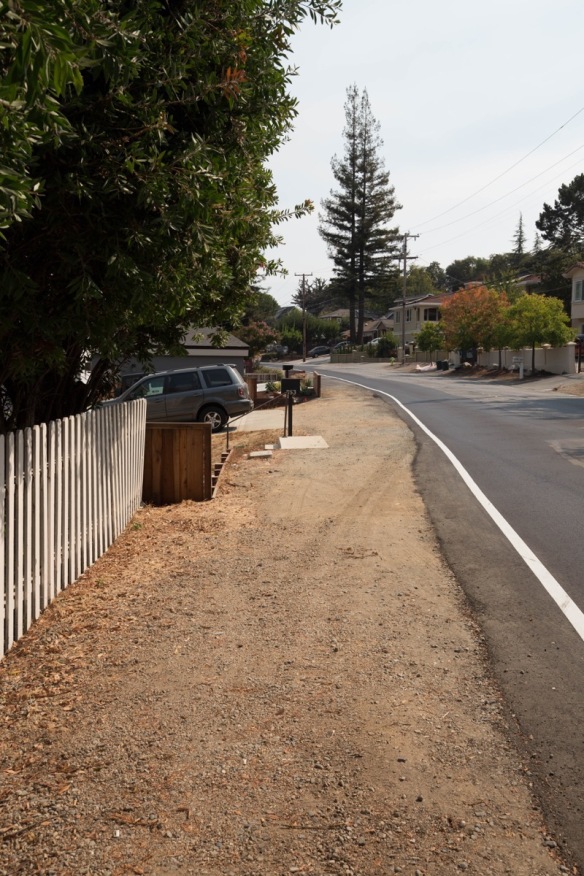 While I was in the downtown area, I checked in on a number of up-and-coming Redwood City restaurants. I haven’t had time to try them yet—none of them are actually open to the general public—but given the number of them and the fact that some are rather imminent, I thought I should give you a quick rundown on what’s new or coming soon:

Oktoberfest is rapidly approaching! As I learned several years ago when my wife and I went to Germany, Oktoberfest isn’t really an October thing; it generally takes place in mid-to-late September (and often spills over into October). Our local version is coming up: it is scheduled for September 19-23, with evening events on Wednesday the 19th through Friday the 21st, and mostly all-day events on the weekend of the 23rd and 24th. Expect beer and German food and music. You need to purchase tickets in order to attend, and Redwood City is recommending that you buy them in advance, so check out Redwood City’s Oktoberfest web page for all the details. Oktoberfest has grown over the years into one of Redwood City’s most popular events, so if you haven’t been before you may want to check it out. Note that if you aren’t a beer drinker, there is still plenty to see and do—and the tickets are even cheaper in that case, so don’t let that hold you back.

1 thought on “Walking Along Side”