It has been said that 90% of restaurants fail within their first year. Fortunately, that isn’t really true. In fact, the number appears to be more in the range of 20%-25%. We’ve had some turnover in our restaurants lately and the other day, as I was enjoying lunch on the sidewalk at Vesta, I found myself thinking about why some restaurants succeed while others don’t.

Ignoring the purely business-related needs (which are not unique to restaurants) such as sufficient start-up capital, a properly functioning staff, and owners and partners who get along and agree on the restaurant’s vision, I figure that in order for a restaurant to succeed it really needs to do three things:

The first item is all about your menu: a restaurant should serve items that people who live or work in the area actually want, that isn’t already being served by an abundance of other restaurants in the area (some competition is fine, of course). Vesta, for instance, serves a high-quality product that isn’t like what you get from your typical “pizza joint.” They combine locally sourced, organic ingredients into creations such as their signature Sausage & Honey pizza (which happens to be what I was enjoying while I was thinking about all of this). Vesta, although a restaurant that serves pizza (and delicious small plates), plays in a different league than most other pizza places, and thus isn’t really in direct competition with the many run-of-the-mill vendors we have here in Redwood City.

“Location, location, location” is the familiar real-estate mantra. A successful restaurant should have a location that is easy to get to, has sufficient nearby parking, and, ideally, is along a route where people regularly pass by. I have to wonder if location was part of the reason for the closure of Howie’s Artisan Pizza here in Redwood City: they were located on Jefferson facing the mostly blank side of the Century Theater complex, where few people paid attention to them. Vesta, on the other hand, has a prime location on what I consider to be Redwood City’s “restaurant row”: on Broadway between Jefferson and Main (and just around the corner from the Marshall Street Parking Garage). Because they are near to other restaurants and have plenty of sidewalk seating, they are highly visible to diners eating at those other places as well as to people walking or driving by. The sight of many happy patrons is the best advertising, really.

Vesta opened in June of 2012 and seems consistently busy, so clearly they’ve made it. In my view they have the consistency issue nailed: the Sausage & Honey pizza I was enjoying the other day was just as good as the one I remember from their opening days, when I first dared to try it. Vesta’s menu has of course been tweaked over the years, but not radically: mostly, I believe they just added some new pizzas and some new “small plates” (and there are seasonal adjustments, of course). But consistency is one of their hallmarks: if you like what they serve, you know that on subsequent visits you’ll get the same product, at the same high level of quality. Some other restaurants come right out of the gate with a lower quality product, or begin high and, as time passes, staff turns over, and management begins to look for ways to increase margins, allow quality to suffer. A decline like this can be very difficult for a restaurant to recover from. Once a restaurant has developed a bad reputation with their customer base, it’s very difficult to persuade customers to return.

I’m sure that there are other reasons why restaurants close, and of course each situation is unique and generally known only to the restaurateur, so other than noting that a restaurant is gone, I usually don’t go into the reasons why. Instead, I prefer to focus on what’s next, as I’m doing today.

I mentioned in a recent blog post that Mandaloun had closed, to be replaced by Courthouse 2021. That new restaurant opened this week (on Tuesday, April 24), so my wife and I, along with two friends, paid them a visit. Because we were there on what was only their second night, I’m not going to give the place a full review: the first week or two of a restaurant can be a bit inconsistent as the staff (ideally) becomes a well-oiled machine. I prefer to give restaurants a couple of weeks—and a couple of visits—before I truly pass judgement. But I do want to help satisfy some of the curiosity that you may have about Redwood City’s newest restaurant.

You’ll find Courthouse 2021 at 2021 Broadway, in the old Mandaloun space. A lot of Mandaloun’s interior design remains, although Courthouse 2021 has added padded leather panels framed by metal beams, which not only gives the place a bit more class, it also brings the volume level down somewhat. In order to play up the courthouse theme they’ve hung up a handful of 8×10-sized “Wanted” posters naming famous outlaws, plus a couple of stills from old movie courthouse scenes, but our group agreed that they seemed out-of-place, not really fitting in with the overall decor.

Courthouse 2021 serves “seasonally inspired Farm-Fresh American cuisine” (see their menu here) in an upscale, white-tablecloth environment—which is reflected in the prices. Their fairly extensive wine list has bottles of wine ranging from around $30 all the way up to $425, and entrees (many of which are à la carte) that typically fall in the $25-$50 range (the Prime Tomahawk Steak is a real outlier at $125, but at 42 ounces I’m sure it is meant to be shared). For the record, our four-person meal—which included one glass of wine apiece, two appetizers, four entrees, and one side dish—came to $260 including tax but not tip.

Courthouse 2021 has a back patio, although it isn’t yet open. Expect it to be available along with our warmer weather. They are not yet serving lunch, although the plan is to introduce it at some point. They do have a nice looking bar (somewhat visible in the above picture), and a comfortable lounge area up front. Currently Courthouse 2021 is open from 3 p.m. to 10 p.m. (11 p.m. on Fridays and Saturdays), with happy hour beginning at 3 and dinner beginning around 5:30 p.m. Reservations are recommended.

For what it’s worth, the food was quite good, and we all agreed that the presentation was excellent. The atmosphere was really nice, making for a comfortable evening. We’ll definitely give them another try, perhaps in a couple of weeks. At that price level they won’t be a regular thing for me, but for a nice evening out, Courthouse 2021 will certainly be on my list.

For something simpler, the old “Fish’s Wild” restaurant on Theatre Way has been replaced by West Park Farm and Sea. I have yet to give them a try, but their menu (which isn’t yet on their website) has an attractive list of salads, wraps, and rice bowls, all of which can be topped with various proteins. They also have some interesting side dishes (“smalls,” in West Park-speak) and desserts. Next time you are on Theatre Way, peek in and check out their menu.

Not too far away, Curry Wrapper’s Delight has closed, to be replaced by Dhaba Express. Curry Wrappers served “Indian fast food” (including wraps, of course) whereas Dhaba Express serves “Authentic Indian food.” Located at 312 Arguello Street (close to the Broadway/Arguello/Marshall intersection), this small eatery boasts a daily menu that includes some 6-8 items each day. Walk-in customers can get combination plates that include rice, salad, and Indian flatbread. I haven’t tried them yet; I’m hoping that they are a nice complement to the higher-end Broadway Masala.

Further along Broadway, Teaspoon has added some simple plank benches suspended between planters to the front sidewalk area, which should not only give their customers a nice place to sit, but should also help improve their visibility.

Over on Main Street the transformation of the old DermaBella Skin & Body Care storefront into Ranzan continues apace. As I suspected, Ranzan will indeed be a Japanese restaurant: they’re advertising “Nihonryouri Authentic Japanese Dining.” According to a sign in the window, they plan to open at 921 Main Street sometime this summer. 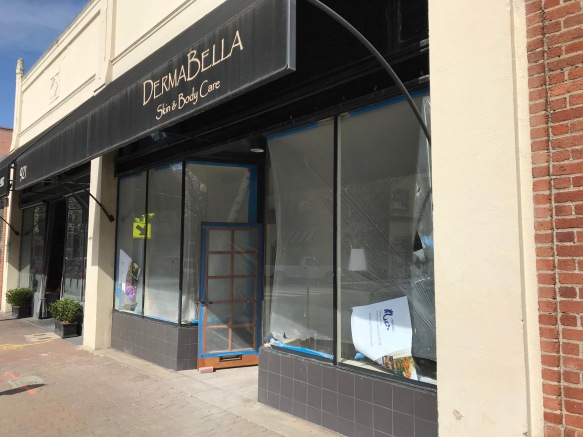 Sitting at Vesta I found myself not only looking at Courthouse 2021, but also at the retail spaces next door: the former home of “Curious Things” and the empty space that until recently was Fortune Chinese. I had thought that both spaces were going to be combined into one, to become “The Nighthawk”—which I guessed would be very similar to its cross-street sibling, Blacksmith. While there is plenty of work going on in the smaller Curious Things space, suddenly the Fortune Chinese space has a “For Lease” sign in the window—so either my assumption was way off base or the owner’s plans have changed. Whether or not the Curious Things space will become The Nighthawk, or something else altogether, from the framing that’s been done so far it does appear as if it will be a bar or restaurant:

Finally, now that the multi-story office building at 889 Winslow (a.k.a 815 Hamilton; the new brick building directly behind the Fox Theatre) is essentially done, my attention is focused on the three retail spaces on the ground floor. These are as-yet empty, but according to Steve Penna of The Spectrum two are (were?) going to be restaurants: Opa (a Greek place) and Mo’s (“the breakfast and burger joint”). I have no further insight into whether these restaurants are still coming, but I do note that on both restaurants’ websites they list other “coming soon” locations—and Redwood City is not among them. The larger of the three spaces, at the corner of Winslow and Theatre Way, is currently being used to store tools and construction materials; I’ve not yet seen any indication that it is being built out for a particular lessee.

Regardless of whoever does occupy these spaces—and those two sound good!—it’ll be nice to have some restaurants or retail along this part of Winslow, complimenting CRU Wine Bar & Merchant, which is right across the street.

I always find it fascinating to see which restaurants make it, and which do not. Some just don’t resonate with their intended audience. Others start off strong and then fade over time. Others chug along doing solid business, becoming the mainstays of Redwood City’s dining scene. I always root for the new guys and am delighted to see a restaurant find its niche and succeed. Let’s hope that all of these new places are part of the roughly 75% of restaurants that make it through their first year, and that they go on to great success.

5 thoughts on “The Secret of Success”