This week’s title is borrowed from the 2012 movie of the same name starring Clint Eastwood and Amy Adams. The subject of the movie—it’s about the relationship between an aging baseball scout and his daughter—has absolutely nothing to do with this week’s topic, but the title fits this week’s topic well. And my wife and I did like the movie…

At its April 23 meeting Redwood City’s City Council was asked to approve traffic calming improvements being planned for Hopkins Avenue and authorize city staff to move to the next phase: to put together construction drawings. I watched the whole meeting, as I often do, but paid particular attention to that one item. I did so because I live in the area (I live in the vicinity of Sequoia Hospital) and walk and drive up and down Hopkins Avenue a lot. I’m not the only one out there, of course: the whole reason for this particular project is the increased volume of traffic that Hopkins Avenue has seen over the last several of years, and the safety issues that have arisen from that.

To the casual observer Hopkins Avenue may seem just like any other residential street, but it really isn’t. First off, the way that it merges into Broadway makes it an ideal way for motorists coming from Emerald Hills, from San Carlos, and from Highway 280 to get to downtown Redwood City (or even just to El Camino Real). For most of its length Hopkins Avenue is a very wide street, which subconsciously encourages motorists to ignore the posted 25 mile per hour speed limit signs and instead drive at a much faster rate. The fact that Hopkins cuts through a heavily populated residential area that contains not only a busy neighborhood park but also a number of nearby schools, means that there are a lot of children crossing the street at various times of the day, both on foot and on bicycles. The presence of Stafford Park, right on Hopkins Avenue between King and Lowell, raises the possibility of children running into the street after stray balls (I have seen a couple of balls roll into the street over the years, although fortunately the people chasing them have been very careful), and of course during the summer concert season (which begins on June 13 this year) things get particularly messy, traffic-wise, in the vicinity of the park.

And then there are the curves. Hopkins Avenue is for the most part straight as an arrow, but the very unusual way in which Broadway and Duane Street meet Hopkins Avenue, and the curve at the intersection of Hopkins and Alameda de Las Pulgas present challenges, especially for drivers who are not well familiar with the route.

As I told my wife the other day, sometimes my blog almost writes itself. The City Council meeting was in the evening of Monday, the 23rd, but I wasn’t able to watch it until the next day, Tuesday. On Wednesday afternoon, while driving back from an appointment in San Jose, I was thinking about what that week’s blog post would be about. And when I got near home, I saw this:

Because the cars are in the way it’s a bit hard to see, but this is the troublesome curve where Hopkins Avenue meets Alameda de Las Pulgas. Here there is a “Y” that lets westbound drivers on Hopkins who want to turn northbound on Alameda (going towards Highway 280 or San Carlos) do so without having to stop at the conventional intersection just visible at the left edge of the picture. The following map shows this particular intersection: 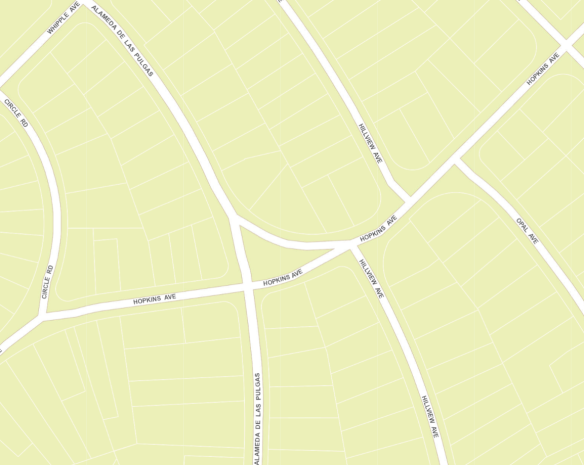 The curve in question is the top part of that small triangle in the center of the above; without it, the intersection of Hopkins and Alameda would be a conventional one. But this curved leg gives some of the drivers transitioning between the two streets an additional option. For drivers heading west on Hopkins and using this curve to head north on Alameda, it works pretty well; drivers still have to pay attention to the Yield sign where they merge onto Alameda—which they don’t always do—but I’m not aware of a great many problems at that point.

The real problem with this particular curve is that drivers going in the opposite direction—those traveling southbound on Alameda de Las Pulgas and wanting to head east on Hopkins Avenue—have the option to either approach the conventional intersection and made a standard left turn, or use the curve. If they choose the latter, they have to negotiate a somewhat awkward—due to limited sight lines and an abundance of people not obeying the speed limit—merge onto Hopkins. Although I did not witness the incident in the earlier picture—I arrived just after it occurred—from the position of the cars it appears that the white car came off Alameda following the curve, and when merging onto Hopkins didn’t see the grey sedan coming up the street right at them.

I haven’t personally witnessed many actual accidents at this particular intersection, but I’ve seen quite a few near misses. Where the curve reaches Hopkins there is a stop sign, but people often slow down and then roll right through after quickly looking in both directions. Because there could be traffic approaching from either direction on Hopkins, or from Hillview Avenue (the other street that meets at this intersection), unless the driver on the curve really stops and takes a good long look in every direction, it’s easy to cause, or just barely avoid, an accident here.

Fortunately, an important part of the plan for the Hopkins Avenue Traffic Calming Project addresses this very intersection. While the presence of a couple of houses along it mean that this troublesome curve cannot be eliminated altogether, the plan is to change this short, curved section of road from two-way to one-way, and require that cars on Alameda wanting to turn onto Hopkins proceed to the four-way stop and make a conventional left turn. Going the other way, westbound cars on Hopkins Avenue wanting to turn north onto Alameda de Las Pulgas will still be able to use the curve to do so. This seems a simple and easy-to-implement solution that will go a long way towards improving safety.

Near the other end of Hopkins Avenue, down towards El Camino Real, is Hopkins Avenue’s other curve. This one also includes a “Y” intersection, but complicates it with a loop: 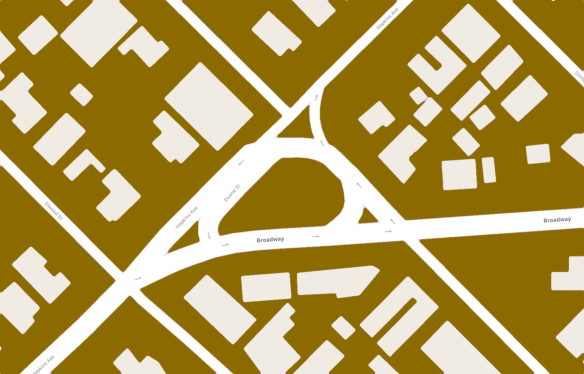 Several years ago, when this particular configuration was first installed, it felt somewhat confusing to navigate. However, those of us who live in this part of Redwood City, plus those who regularly commute along this route, quickly adjusted. Once people coming up Hopkins from El Camino Real (in the above map, people heading from the top edge to the lower left corner along Hopkins) realized that they don’t have the right-of-way and have to stop at Duane, yielding to cars coming around the loop, things seemed to settle out. I don’t live in the immediate vicinity of this particular intersection (although I travel through it very frequently) but I get the impression that safety-wise, this unusual intersection actually works out OK. As a pedestrian I find it a tad tricky to navigate, but I’ve worked out my favorite routes. I will note, however, that there is no marked route to get to the park in the center of the circle: there are no crosswalks that lead to it, and thus people wanting to use the small park find themselves having to essentially jaywalk to get there.

My assessment that this particular curve along Hopkins Avenue (technically, I guess it is on Broadway) is a relatively safe one seems to be borne out by the fact that the Hopkins Traffic Safety Project is really doing nothing to this particular part of Hopkins Avenue. Between this curve and the one at Alameda, however, is the project’s only semi-controversial aspect: each block between Nevada Street and Elwood Street is slated to get one or two small raised islands in the center median. It is the location of those islands that can be somewhat controversial, given that they could potentially restrict entry or exit from individual driveways and, at Grand Street, block left-hand turns. However, the city’s plan is to work with individual homeowners, block by block, to ensure that the islands—which are intended to make the street feel narrower, something that has been shown to cause motorists to slow down—don’t unduly burden any particular resident. Hopefully this process will go smoothly: I would hate to see this badly needed project held up due to the placement or size of a particular median island.

As one who walks along Hopkins Avenue frequently, I really want to see the pedestrian improvements that this project will bring: more and better-marked crosswalks in several locations, plus curb “bulbouts” that will increase pedestrian visibility and reduce the amount of time a pedestrian is actually in the street. And, at the park, an on-demand flashing crosswalk (at Lowell Street) plus a raised crosswalk that will do double-duty as a very gentle speed bump (at King Street)—which together might be effective enough to eliminate the need for the temporary stop signs at those intersections during the summer concert season.

My one frustration with this project is the glacial pace at which it is proceeding. This project began back in the summer of 2015, and since then there have been four community meetings and a community survey. As well, the project was reviewed by the Complete Streets Advisory Committee (who recommended the project to the City Council) and, now, by the City Council—who unanimously approved taking the project to the next step, the creation of construction drawings. But funds for construction have yet to be approved, and Mayor Bain seems to want yet more community input before that will occur. Even if things go smoothly, we aren’t likely to see this project built for another year and a half, meaning that from initial conception to construction this project will have taken over four years. Does anyone but me think that that is a bit excessive, given that, unlike a truly controversial project such as the Farm Hill Boulevard Pilot Street Improvement Project (which reduced the number of traffic lanes along a heavily traveled corridor) this project adds no stop signs, takes away no traffic lanes (except at the short Hopkins/Alameda curve), and essentially only adds some small islands and some better marked crosswalks?

This project needs to be approved, so that the city can start thinking about the next project, whatever that is. Let’s address that troublesome curve at Alameda de Las Pulgas before additional accidents happen, and make the corridor safer for all of the area’s many pedestrians.

Radwood City—a small organization that is working to build “a community for 20’s and 30’s living in Redwood City, CA”—has invited me to join them on a short “Arts & Culture” walking tour of our downtown. Any of you who would like to join us are welcome (and pass the word!). The event is free, and will take place on Saturday, May 19, starting at 4 p.m. Meet us in Courthouse Square! For more information, see the event’s Facebook page.

5 thoughts on “Trouble with the Curve”