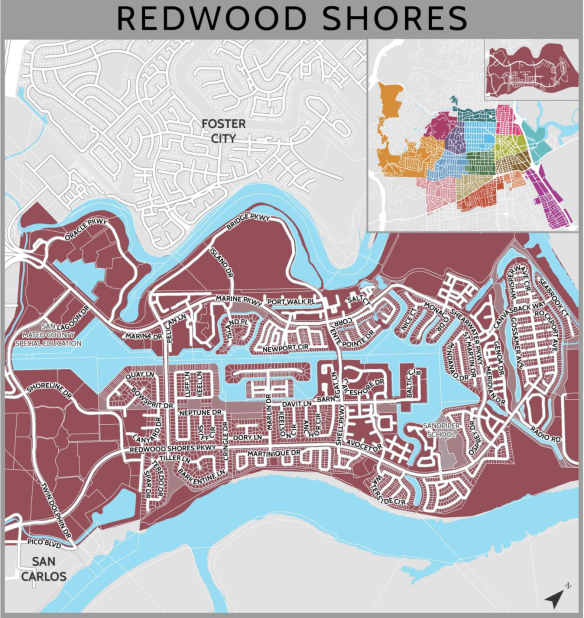 What’s interesting about this map is not the layout of the neighborhood itself (although it certainly has its points of interest): it’s the inset in the upper right corner showing Redwood City’s neighborhoods relative to one another. Redwood Shores is shown in an inset within an inset, which is unusual. But if the inset showed Redwood Shores in proper relation to the rest of the city, that inset would have to be a lot bigger, and would include a great deal of San Carlos and even Belmont.

To my mind the physical relationship that Redwood Shores has to the rest of Redwood City is roughly similar to the relationship that the state of Alaska has to the rest of the United States. With Alaska, although you can drive from the lower 48 to the state of Alaska, you cannot do so without passing through Canada. Similarly, you cannot drive from downtown Redwood City to Redwood Shores without passing through San Carlos or Belmont. Even on foot, walking on the east side of Highway 101, you still must pass through a small part of San Carlos. Unlike the United States, Redwood City’s boundary does encompass Redwood Shores—but between the main part of the city and the Shores lies Bair Island and Steinberger Slough, meaning that the only way to get to Redwood Shores while staying within the city limits requires a boat.

Allow me to provide some history. In 1928 Leslie Salt Company acquired the Redwood Peninsula (essentially, today’s Redwood Shores) to add to its existing salt-making operations on Bair Island. They called the combined properties “Redwood Shores” and produced salt for some thirty years using evaporative ponds on the properties. By 1959 they started to think about developing the lands for other uses, and so decided to see if their land could be annexed to a nearby community. They approached both San Carlos and Belmont, but both cities rejected Leslie Salt’s proposal. They then approached Redwood City, who of course accepted.

In 1963 Leslie Properties, Inc. (a subsidiary of Leslie Salt Company) proposed a planned community along the lines of Foster City on their lands. Their original plan envisioned 100,000 people living in “Redwood Shores” (which at that time would have been both the Redwood Peninsula and Bair Island). Leslie, who owned the land, was in charge of land reclamation, project administration, and financing. Redwood City took responsibility for public infrastructure, including parks, a fire station, a community center, and a branch library. For Redwood City, this was a significant commitment—one that might have been too much for the smaller communities of San Carlos and Belmont, perhaps explaining their rejection of the annexation offer. Whether or not that was the actual reason, with responsibilities fully defined, Leslie started with the Redwood Peninsula property and began to make the land suitable for construction by filling in their evaporation ponds. Soon, however, just as the first homes were being built, the Federal Housing Administration (FHA) suspended home loan guarantees for the project out of fears that the site was a potential earthquake hazard. It took thirteen months and several seismic studies before the FHA was satisfied, but the damage had been done: Leslie Properties found themselves teetering on the verge of bankruptcy.

In 1973 Leslie sold the development to a real-estate subsidiary of Mobil Corporation. Mobil’s plans called for some 20,000 residents on the Redwood Peninsula portion of the property, with an additional 40,000 planned for the Bair Island land. Things moved along slowly, until the 1982 economic recovery spurred development. In the early 1980s a corporate complex dubbed “Shores Center” opened that attracted a number of well-known companies, and included the Hotel Sofitel (which today is known as the Pullman San Francisco Bay Hotel). As for the Bair Island property, a citizen’s referendum narrowly defeated the “South Shores” project that had been planned there. Consequently, Bair Island was sold to Redwood Shores Properties, which in 1997 sold the land to the Peninsula Open Space Trust.

By 1997 Redwood Shores had some 15,000 residents. That year saw the opening of Sandpiper Elementary School and Community Center, as well as the Marketplace Shopping Center. The following year Redwood City opened Redwood Shores’ fire station.

No discussion of Redwood Shores’ history would be complete without a mention of Marine World. Back in the mid 1960s, when construction was beginning on the first homes in Redwood Shores, construction also began on Marine World. It was located on a 66-acre parcel close to the Bayshore Freeway along Ralston Avenue (which, east of the freeway, was renamed “Marine World Parkway”). Initially financed and run by ABC (the television network), the park opened on July 18, 1968. That first weekend the park drew in over 25,000 visitors.

Marine World sported a wide variety of animal displays and shows, including whales, dolphins, and penguins. It also had water skiing exhibitions, one of which was performed by a 600-pound elephant named Judy. And Marine World was more than just an amusement park; it also performed oceanographic research and took in and rehabilitated stranded, sick, or injured marine animals, who were subsequently released back into the wild.

In 1972 the park was sold to a new operator who added land-based animals to the mix and re-branded the park “Marine World/Africa USA.” Now visitors were also able to see various land animals close-up, and kids were able to ride elephants and camels. But just when things were looking up, in 1976 Mariott’s Great America opened in nearby Santa Clara. This drew attendance away from Marine World/Africa USA, cutting into the park’s profits. To raise funds, the park’s owner sold the development rights to the park’s land. The developer who bought those rights soon came up with a proposal to build an office complex there, spurring Marine World/Africa USA’s owners to find a new home for the park. On September 29, 1985, the park closed. (Less than a year later it reopened in Vallejo, California; today it is known as Six Flags Discovery Kingdom.) With the park’s closing, “Marine World Parkway” was renamed to “Marine Parkway,” putting an end to this particular chapter in Redwood Shores history. In place of the park the Centrum office complex rose, whose first and only tenant was, and still is, Oracle. 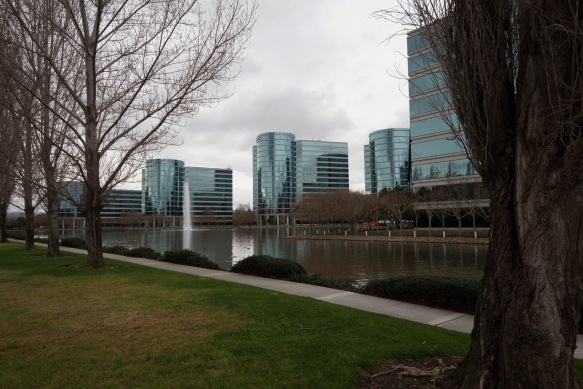 In its early days Redwood Shores consisted of a few hundred homes, plus Marine World. Nowadays, of course, it’s a lot more. Redwood Shores may be one of Redwood City’s most “complete” neighborhoods, in that it has housing, offices, stores, restaurants, hotels, parks, schools, plus a branch of the Redwood City Library. A number of corporations call Redwood Shores home, including Oracle, Shutterfly (a provider of personalized photo-based products and services), and Electronic Arts (a video games company). Nintendo of America and Activision also have offices (but not headquarters) in Redwood Shores.

Redwood Shores currently has three public schools. Sandpiper School opened in September 1997 serving grades K-5, but thanks to a some recently completed additions it will soon be educating almost 800 students in grades TK-8. In August 2010 Redwood Shores Elementary School opened its doors on Shearwater Parkway. This school spans grades TK-5, and has about 525 students. Finally, the recently completed Design Tech (“d.tech”) High School, on the Oracle campus, had their ribbon-cutting last January. This free public charter school currently has about 550 students in grades 9-12.

In 2008 Redwood City completed the construction of the Redwood Shores branch of the public library. This library not only has the usual books and (these days) computers, it also has a unique “Environmental Interpretive Center,” funded in part by the State Coastal Conservancy. Due to its location on the banks of Belmont Slough, the library sports a deck from which budding naturalists can observe the slough and its varied wildlife. A short bridge even connects the deck to the SF Bay Trail, which runs along the slough. 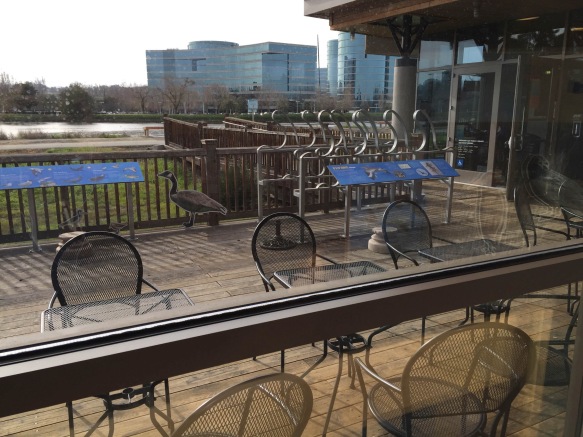 Adjacent to the library is where the city’s latest piece of public art will be installed: the Pirate Ship, which will not only be public art, but will also be an interactive play structure.

Redwood Shores has a number of great parks scattered throughout. One that deserves highlighting is Shore Dogs Park, a fenced off-leash dog park with separate areas for large and small dogs. My wife and I used to take our greyhound there, and he truly loved it. You’ll find the park on Radio Road, which is about 2.4 miles in from Highway 101 along Redwood Shores Parkway. It is open from dawn until dusk every day, although it may be closed on days with inclement weather.

Radio Road is T-shaped: turn right at the intersection to get to the dog park and to the entrance to the Silicon Valley Clean Water (SVCW) plant, which is currently being expanded behind the green fencing you see ahead of you when you approach the intersection. The SVCW plant treats and transforms Redwood City’s wastewater into water that can be used for irrigation. This treated water is just now being piped to some of our newer downtown buildings, to be used for non-potable uses such as toilet flushing. (Don’t live in one of those new buildings? If you can transport it, you can still obtain recycled water for your own garden.)

If you turn left at the T, you’ll pass the old radio station buildings that the street is named for. The one on the right was KGEI. During World War II KGEI broadcast a “voice from home” to the troops fighting in the Pacific Theater. These days that building is used for “construction management activities” by Silicon Valley Clean Water. As for the left-hand building, it, along with the antenna to its left, is the transmitter for KNBR (“The Sports Leader”).

To the left of the radio station buildings you’ll see wooden observation platforms; hike out to these to view the wetlands wildlife.

Redwood Shores is a great neighborhood, and a great place to live—especially if you like to live on or near the water. Because it is a relatively new, planned community, it is a great place to walk, whether you are on one of the Shores’ many sidewalks or on the Bay Trail that largely surrounds it. Residents might note that Redwood Shores can be tricky to get in and out of—especially during the commute hours—but I suspect that the quality of life, and the fact that much of what the residents need can be obtained right within the neighborhood, goes a long way towards making up for that.

Redwood City’s Farmer’s Market is back! They’re open on Saturdays from 8 a.m. to noon, and can be found on Arguello Street between Broadway and Brewster. Redwood City claims that this is the “oldest and largest farmer’s market on the Peninsula,” having been founded in 1979.