I hope you all had a great Thanksgiving! I certainly did, although I must confess that I didn’t celebrate the holiday in Redwood City. This year my entire family—my parents, my siblings and their spouses, and all of our collective children (minus two, who for various reasons were unable to attend this year)—gathered together in the San Diego area for the November feast. Altogether, we had some 34 people at our giant, U-shaped Thanksgiving table. As you can imagine, the menu (which, except for the turkeys, was assembled potluck-style) was varied. We had a great many leftovers, which is one of the best things about Thanksgiving—except that since just about everyone had to travel to this year’s venue, and most of us flew, very few of us could take leftovers back home. Fortunately, most didn’t leave until Sunday, giving us a couple of days to work our way through the extra food.

The Thanksgiving holiday is centered on a meal, of course, but for most of us what really makes Thanksgiving special is the people we celebrate it with and the time we have with them. Whether we cook our own meal, sit down to someone else’s table, or go to a restaurant, the simple act of breaking bread with others is perhaps one of the most human experiences we can have. The entire holiday season—from Thanksgiving through the end of the year—is a great time to spend time with others. While hosting friends and family in your own home is a wonderful way to enjoy the season, so, too is going out with them to a good restaurant. And where better to do that than right here, in Redwood City?

As Redwood City residents well know, our restaurant scene has been steadily improving over the years. And whenever it seems that we’ve lost something special, something new comes along to take its place and add to our culinary picture. For instance, at the beginning of April (on April 1, in fact), Chantilly, a restaurant that served French and Northern Italian dishes, permanently closed their doors. Regretfully, I never got to dine at Chantilly, which was said to be “one of the top eating establishments in the Bay Area.” Chantilly originated in Palo Alto, first opening for business there back in 1974. In 1999 they moved to 3001 El Camino Real, an address that the Post Office treats as Redwood City—although technically the two-story restaurant building is located in North Fair Oaks, just a few blocks south of Redwood City’s official boundary. 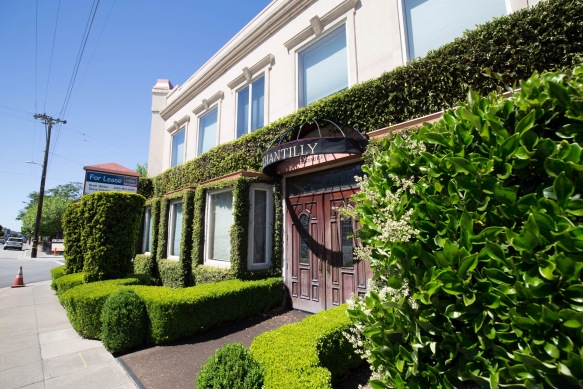 Since Chantilly’s closing, the building has sat empty with a large “For Lease” sign prominently displayed out front. It seems that that will soon change, however, as I recently learned from an article published in The Almanac. Bacchus Management Group, the company that runs a number of popular Bay Area restaurants including The Village Pub (in Woodside), Mayfield Bakery & Cafe (in Palo Alto), and San Francisco’s Spruce, plans to open a new, as-yet unnamed, restaurant in the former Chantilly space. The new restaurant will be a “quality steakhouse,” something that Tim Stannard, one of Bacchus’ founding partners, feels are in short supply in the Bay Area.

Reconstruction of the ivy-covered building should begin soon, with the goal of opening their doors sometime next summer. Although they won’t technically be a Redwood City restaurant—indeed, the company hopes to tie their identity more to Atherton, which lies directly across El Camino Real from the restaurant space—they are close enough and I, for one, plan to give them a try. Assuming that the new restaurant is up to the standards of The Village Pub (a restaurant I can heartily recommend), I’ll have one less reason to make the drive to Woodside.

The restaurant space that most recently was home to Howie’s Artisan Pizza—until the next-door Broadway Station office/retail project was announced (but well before construction, or even demolition, began)—is another that is finally turning into a new restaurant:

Redecoration and remodeling of the Howie’s space is now well underway, and soon Pasha Mediterranean will open for business here on Jefferson Avenue in Redwood City. I’ve done some digging and all I can figure is that they might be connected with the Texas-based Pasha Mediterranean Grill—although so far that firm’s three locations are only in Texas. The logo looks pretty similar, which causes me to think that there could be a connection. I guess we’ll find out once Huseyin Uygur and Serkan Bikim, the new restaurant’s two principals, open their doors.

Not every closing restaurant turns into a new one, of course. 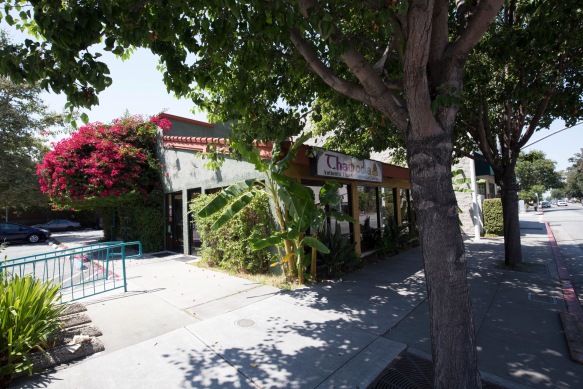 Ever since the 910 Woodside Road project was approved by the Planning Commission, back in January, I’ve been keeping an eye on Thaibodia, the restaurant that currently resides at that address. The approved project is for a three-story, 10-unit condominium building, and I’ve been anticipating the closing of the restaurant and the start of construction for some time now. But so far there has been no sign of any development activity: from what I can tell, the restaurant remains open and continues to serve “Northern California’s finest specialty Thai and Cambodian cuisine” (their words; I have not dined at Thaibodia and thus cannot speak to their veracity). Perhaps it is just taking longer than usual for the developer to get their construction plans finalized and approved, or maybe they are finding it hard to obtain the needed workers and equipment for the job, given what must be a very competitive environment for such. Either way, I’ll continue to watch the site. If and when construction does begin, fans of Thaibodia can content themselves with the fact that there are two other locations, one in Santa Clara and one in Willow Glen.

As I said earlier, Redwood City is a great place to dine out any time, so if you are thinking about taking family or friends out for a holiday meal, we have almost any type of food you could want. If you need suggestions, I have a number of personal favorites. In no particular order, might I suggest:

Redwood City has many, many more restaurants than I have listed here, of course, some of which may well be your favorites. Feel free to chime in with your own recommendations—especially for places that would be great to take others during the holiday season—in the comments. And this year, think about giving, instead of presents, your presence—along with perhaps a meal at one of Redwood City’s fine restaurants.

As you likely already know, Ian Bain was selected as Redwood City’s mayor for the next two years, along with Diane Howard, who will serve as vice-mayor. Both were the only nominees for their respective positions, and both were elected unanimously (by their fellow council members; every two years our mayor and vice mayor are selected by the council from among their own). I want to add my congratulations to the many that they received last Monday night. I look forward to their leadership over the next two years with great interest: while I don’t expect huge changes in direction, there will be some—which I will likely be writing about here in my Walking Redwood City blog.