I attend or watch online a lot of City Council meetings and find it interesting how the agendas—and thus the meetings—often get shorter as we approach the end of the year. Possibly this is because people are more focused on the holidays, and don’t want to spend as much time hearing and debating often controversial projects. This year, though, it is also the time when our City Council chooses a new mayor, and I expect that the Council doesn’t want to deal with any major issues just as one mayor is stepping down and another is stepping up. It does make for some less than exciting meetings, though.

The November 27 meeting is when a new mayor will be chosen, and that event is very much the highlight of the meeting. I expect that a great many people will attend, so if you wish to see it in person you may want to get there early (the meeting begins at 7:00 p.m.). Although the Council will conduct a bit of other business in addition to selecting a new mayor, the agenda shows little else to get excited about.

On the surface, the City Council’s November 13 meeting also wasn’t that exciting: the main topic was a presentation on the Dumbarton Transportation Corridor project. That was interesting as far as it goes, but given the challenges and uncertainties that the project faces it’ll be many years before we see any concrete action on the project. We can all dream of a new bridge along the Dumbarton rail corridor that carries either a commuter train or supports additional traffic lanes—or both—but for now it will have to remain a dream. One welcome change that may come sooner rather than later is a possible reconfiguration of the lanes on the Dumbarton Bridge, allowing the lane configuration to favor the principal direction during the morning and evening commutes. A “zipper” barrier of the type now being used on the Golden Gate Bridge is one possible technology that might be used to make this happen.

For me, the interesting part of the meeting was one that flew by rather quickly: the “Consent Calendar.” This is a series of non-controversial, mostly administrative items that the Council typically approves with a single vote. At the November 13 meeting the Consent Calendar was quickly approved, as usual. But there were a couple of items within it that caught my eye. First, there was item 6.1.D: “Parcel Map and Associated Agreements for the Development at 1409 El Camino Real by GS Diller Subsidiary, LLC”. 1409 El Camino Real is the single address that will eventually be assigned to a large apartment complex soon to occupy the block bounded by El Camino Real, Diller Street, Franklin Street, and the Security Public Storage/Chain Reaction Bicycles building. This project, which is also known as “Greystar IV,” is being brought to us by Greystar Development, the folks who built the large Franklin 299 apartments, and who are building both the apartments at the corner of Jefferson Avenue and Franklin Street as well as the large apartment building at 1305 El Camino Real—just across Diller Street from the 1409 El Camino complex.

The 1409 El Camino Real site has been surrounded by construction fencing for a number of months now, but once held a number of businesses including Treadmill Outlet, a Rent-to-Own store, and Sequoia Veterinary Hospital:

The green construction fencing towards the left is from the 1305 El Camino Real project, and the apartments looming over it is the Franklin 299 complex.

1409 El Camino is a fairly large project—it will contain some 350 apartments—but unlike the other three Greystar projects, ten percent of the units will be set aside for renters at the low-income level. (To qualify, a family must make no more than 80% of the “Area Median Income,” which for a family of four in 2017 was $105,350.) Also unlike the other projects this building will have a small amount of ground-floor space (1,400 square feet) set aside for retail.

Getting back to the agenda item, the project itself was previously approved by the Planning Commission (on January 17) and the City Council (on April 3); since then, Greystar has been preparing the construction plans and working out final details with the city. The item approved as part of the November 13 consent calendar appears to indicate that the project is finally ready to break ground.

The next Consent Calendar item—6.1.E—was titled “Professional Services Agreement with Environmental Services Inc. for Environmental Consulting Services for the Harbor View Project”. Back in July the City Council began the process of creating the General Plan Amendment that will ultimately be needed if the Harbor View Project is to ever be approved (which is by no means a foregone conclusion). One of the things that will be needed during consideration of that amendment is an Environmental Impact Report (EIR) identifying the various impacts that the proposed project would have. This includes how traffic would be impacted, where resources such as water would come from, and the like. The Consent Calendar item gives the OK to the consulting company who will analyze the impacts and then write the EIR. The scope of their report has yet to be determined and will be guided in part by input from the community; expect a public scoping meeting sometime early in the new year.

The Harbor View project, as you may recall, is the giant (in excess of one million square feet) office complex that has been proposed for the properties on the Bay side of Highway 101—properties that once held our Malibu Grand Prix, Malibu Castle Golf, Lyngso Garden Materials, and other such businesses.

The Consent Calendar also included an item that would extend and modify the pilot program that has so far enabled Starship Technologies to test their small delivery robots on our downtown sidewalks. The approved item not only extends the length of the pilot to the end of 2018, it also enables a second, yet to be determined, company to test their own robots on our streets and sidewalks. More importantly for those of us who have encountered these robots, the extended pilot has additional restrictions, including:

Switching gears, I recently took a series of walks to check up on all of the active projects, and thought I’d provide an update on some of the more interesting activity as 2017 nears its close. The Stanford in Redwood City project is particularly active: it seems to be racing along. Phase one calls for the construction of seven buildings and a multi-story parking garage plus extensive landscaping on their 35-acre property on Broadway near Douglas Avenue. I circled the block and was amazed at all of the steel framing that has been erected on the site. My lens isn’t nearly wide enough to get all of this huge project in, so I had to take pictures of some of the individual buildings. Here are two:

Here is a photograph of the building that they started on first (and therefore it is the furthest along): 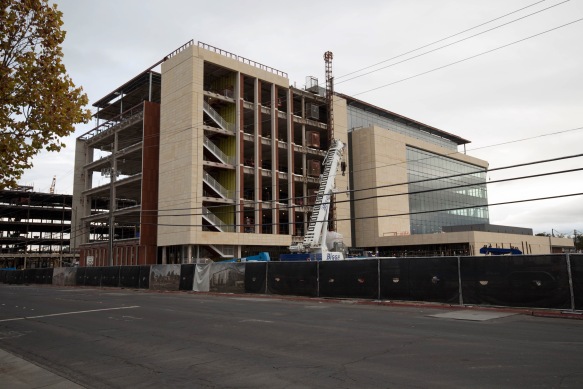 Across Broadway, and closer to the freeway along Douglas, some of you may have noticed this rather large tank: 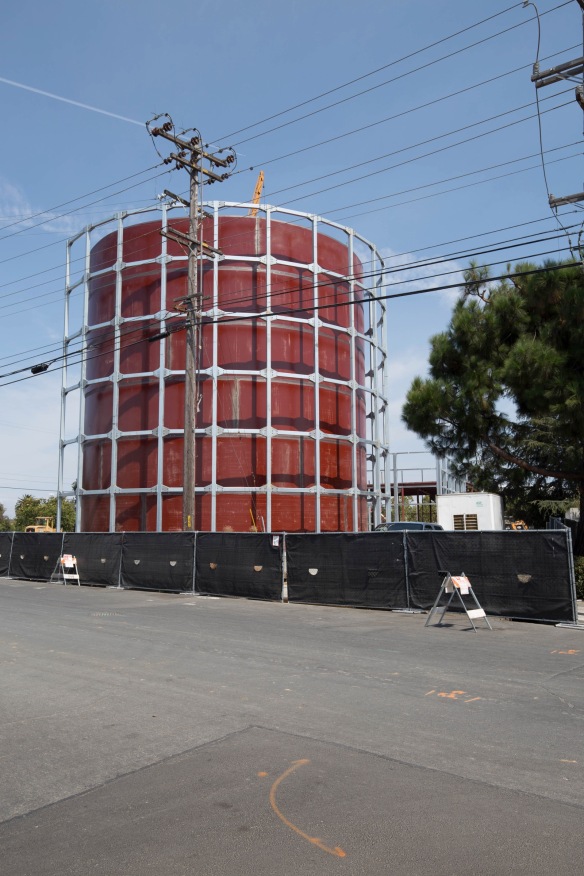 This is not for storage of potable water, as some have speculated, but instead is a “cold thermal storage” tank that is part of the campus’ Central Energy Facility. It will not only help provide cooling to the campus buildings, but will also help reduce electrical use during periods of peak demand. The energy facility will also have a couple of small tanks used for storing heat; Stanford estimates that these will enable some 90% of the campus’ heating needs to be obtained from recovered heat.

Closer to downtown, the 90-unit apartment project at 849 Veterans Boulevard is also moving along rather rapidly. The concrete structure that makes up the two-level surface parking garage took a long time to construct, but with that done the wooden framing that will make up the four floors of apartments is going up quickly: 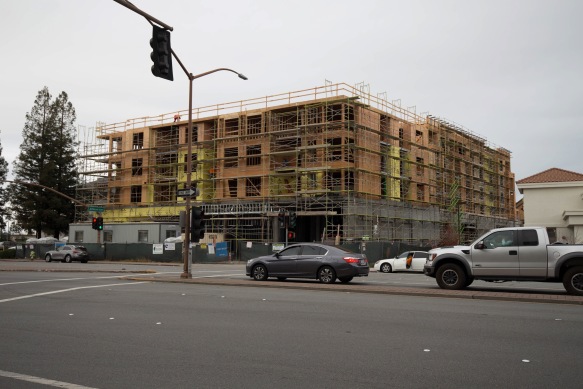 The office/retail building being constructed at the corner of Jefferson and Broadway (the 2075 Broadway project) is something I continue to keep a close eye on. Demolition is complete, and the ground has been made ready in preparation for digging the underground parking garage. The project is encircled by construction fences, but fortunately those fences aren’t too tall as to prevent me from holding my camera up and taking a picture of the work in progress: 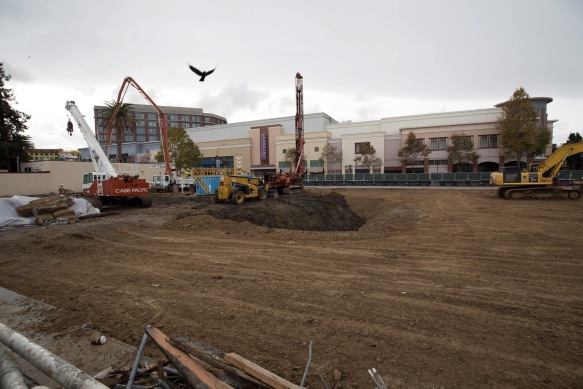 One project that is not making great progress is the Emergency Operations Dispatch Center, being built on the County Center property along Winslow Street. I took the following photo from the top of the county parking garage, which has the added bonus of showing the latest progress on the 550 Allerton Street building as well:

The lot in the foreground is where the Emergency Operations Dispatch Center will someday stand. Behind it, in the center of the above photo, is the building at 550 Allerton. As you can see, its exterior is just about complete, with only some glass still to be installed.

City Council meetings may get shorter and less interesting as the end of the year approaches, but for the numerous construction projects around Redwood City, it remains “full steam ahead.” As you can see just by driving around our downtown, a number of building projects have just about completed their exterior skins and are concentrating their efforts on the interior build-out. I for one am excited to see them reach this stage, since once a building’s exterior is complete crews can finish up any adjacent sidewalks and then take down the construction fences, once again restoring pedestrian access to the affected blocks. Developers are similarly excited, I expect, to approach the point where they can sell or rent space in their new buildings. But as for our City Council, to them this season is apparently just the quiet end of one term and the similarly quiet start of another.