Some time ago—just in time for a major anniversary—a friend of mine clued me in to Geoffrey’s Diamonds, an independent jeweler on Walnut Street in San Carlos. Among their selection of high-end jewelry I was able to find a piece that was perfectly suited to the occasion. Regretfully, as you’ve probably seen (give the number of bright yellow signs on buses and trucks in the area), they’ve lost their lease and are closing—at least for now. They’re continuing to search for a new location in the immediate area that is both suitable and affordable, but given our tough real-estate market Geoffrey’s may well be leaving San Carlos forever.

Geoffrey’s is having a giant “store closing” sale with items up to 70% off their original prices. That sale will continue for a couple of more weeks, so if you have a need for some nice jewelry, do check them out. And if you are a die-hard fan of Geoffrey’s, note that they have a second store in Campbell.

When I discovered Geoffrey’s, I also discovered their second-story balcony, which overlooks Wheeler Plaza. It is a great place to observe the nearby project and to take the occasional picture—although there are some trees that make it less than ideal for photography. Regardless, I’ve been watching the Wheeler Plaza project for quite some time and am impressed with the speed at which the mixed-use project is progressing. The five-story building will ultimately consist of one level of underground parking (for the building’s residents), two more levels of parking fronted by five retail spaces that will face San Carlos Avenue, and three levels of condominiums. Demolition for this project began just about a year ago, and after waiting through most of our last rainy season, by April crews had begun digging for the underground parking level. Now, the underground level is pretty much complete and crews are pouring concrete for the ground-level floors:

The above was taken while standing on the sidewalk on San Carlos Avenue. As you can see, work towards the rear of the project is even further along: many of the forms are in place for some first-floor walls and for columns that will support the upper stories.

On this same block, but along Laurel Street, a separate project to rebuild a number of the retail spaces is also making good progress. Where there were formerly eight separate retail spaces (including the Comerica Bank, which I believe is getting refreshed but isn’t undergoing a major rebuild), there eventually will be six (still including the bank). As well, the three spaces closest to Cherry Street will be topped by a second-story office space.

Here is what the 644-668 Laurel Street project looks like today: 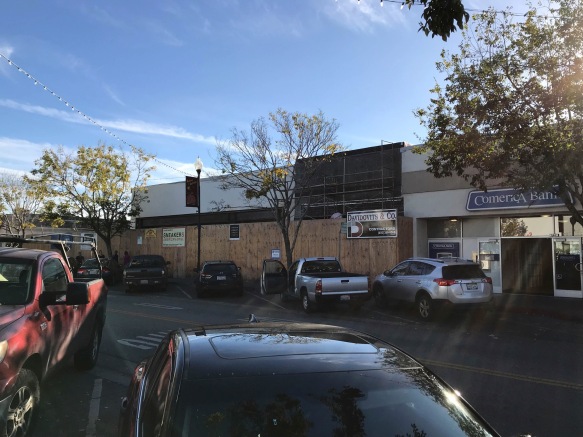 In the above, the portion of the building with the black tar paper along the top (behind the “Davidovits & Co.” sign) will be a retail space for an as-yet unknown tenant. To the left of that, the entire building that is visible will be, as the sign on the construction fencing indicates, the new home of Sneakers American Grill, who will be moving here from their current location on San Carlos Avenue. To the left of that, behind the trees, is a visible gap: this is where the two-story building, with office above and three retail spaces below, is being constructed. So far that building has yet to rise above the construction fencing, so there is little to see at the moment. It will rise to 34 feet in height (with a narrow 36-foot-high “tower” along most of the left-hand side that will hide the building’s heating and air conditioning equipment), well above the 20 foot height of the Sneakers building.

Moving out to El Camino Real, the Transit Village project, which is well underway on the narrow plot of land east of El Camino and just north of Holly Street, has started its next phase. Work has commenced on the former parking lot between Holly Street and the San Carlos Caltrain station, where two additional apartment buildings will be built to complement the four that are in varying stages of completion just north of Holly. Together these six apartment buildings will comprise some 200 luxury apartments ranging from one to three bedrooms in size. Parking will mostly be behind the buildings, in surface spaces up against the tracks and in garages along the rear of each building.

Eventually San Carlos’s historic train depot will also be flanked by two buildings that will have retail or restaurant spaces on the ground floor and commercial space on the second floor. For now, though, the brunt of the work seems focused on getting the four apartment buildings north of Holly Street wrapped up and available for lease. These “Trestle Apartments,” as they will apparently be called, have an online waiting list; if you or someone you know is interested in possibly living in one of these high-end, transit-friendly apartments, consider signing up on the TRESTLEapartments.com website. Note that they do not appear to have announced an availability date for these units as yet.

Across from Trestle, north of Holly, is this place:

Long-time residents of the area will know this as the former site of Hermary’s, a retailer and consultant for high-end home audio and video systems. Some time ago Hermary’s (which also has a location San Francisco) moved over to Industrial Road. Soon after, refurbishment of the above-pictured building began. Throughout I kept a close eye on the remodel, trying to get some idea of who might eventually move in. I guessed that the building was being reconfigured for a specific client, and it seems that I was right. Although there are no signs on the building, it is already in use. I did a bit of digging and learned that it is now the “technology and operations” center for Farmer’s Business Network, Inc.—a Sioux Falls, SD-based company that provides “comprehensive analytics on seed performance, agronomic practices, input prices, yield benchmarking and more based on over 55 million acre-events of real world data from the FBN community of farms.” Yes, believe it or not, Silicon Valley high-tech has come to farming. I guess farming isn’t just about driving around on a tractor any more…

Just south of Holly, across El Camino from where two of the Trestle Apartment buildings will soon take form, I noticed that another project has begun on a formerly empty lot next door to the Shell station. There isn’t much to see as yet, but the 520 El Camino Real project will bring to San Carlos a three-story mixed-use building with two retail spaces on the ground floor and nine condominiums on the upper two floors. Although I’m not sure how I’d like living right next door to a gas station (and, for that matter, near the busy corner of El Camino and Holly), based on the rendering it should be an attractive enough building:

If you are looking for a condo but prefer a quieter part of town, might I suggest the 777 Walnut Street project? It faces onto Walnut Street, but most of us probably know it as the building that you can see the backside of from Laurel Street and the Bank of America parking lot. It will consist of twenty condominiums and, somewhat surprisingly given the residential character of that part of Walnut Street, a 632-square-foot commercial space. It appears to be nearing completion, so expect to see signs advertising the availability of these condominiums soon: 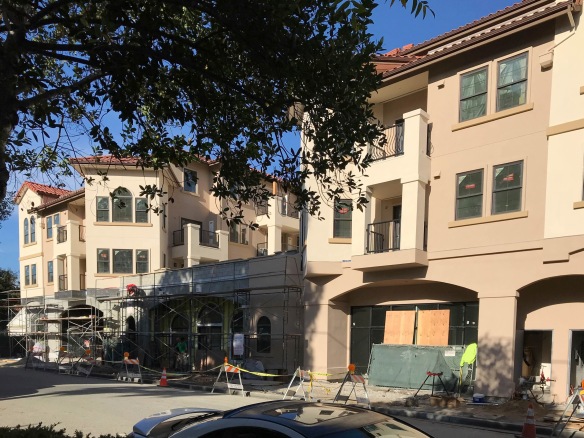 There are another 34 condominiums being built at the corner of Cherry Street and Chestnut Street, but that project is moving very slowly and might even have ground to a halt altogether. Certainly, when I was there the other day there was no evidence of anyone working on the project, and very little visible progress had been made since my prior visit. But a small project further down Cherry Street caught my eye, so I wandered on down for a peek. Here is what I saw:

While admiring the building at 1536 Cherry Street—which appears to consist of four townhouse-style condominiums—I got to chatting with the property owner. Originally there was a small single-family home on the property, but the owner and his wife decided that it was time to leave the area: I believe he said they’re moving to upstate New York. Rather than just sell the property, it seems that they decided to redevelop it first. Construction began in late 2013, but due to a number of issues the building is only now wrapping up. Fortunately for the owner it appears that our economic situation has very much worked in his favor: I’m guessing that he’s going to earn a pretty penny from this small project.

There are a number of projects underway in San Carlos at the moment, but let me update you on just one more: the San Carlos Honda dealership being constructed at 777 Industrial Road. I’ve been keeping an eye on this one both because it is an interesting building in a somewhat unusual location (for an automobile dealer) and because it means the loss of our Honda Redwood City dealership, on El Camino Real at Hopkins Avenue. (If you aren’t up on this one, KB Homes plans to build 33 condominiums on the Honda Redwood City site; see my post Go Stanford! for some background.) The San Carlos Honda dealership continues to make progress, although they won’t make their originally hoped-for opening date of late 2017. Given their progress, I would expect to see them open sometime in the first half of 2018:

In the above picture, the one-story building at the right is not part of the dealership: that is the Melodic Remedy Dance Studio. The two-story building that looms behind the dance studio, which sits along Highway 101, is the dealership. Note the ramps that are needed due to the fact that the sales floor, offices, and service center are all to be on the second floor of the building. The ground floor will be primarily for parking and for the storage of cars for sale.

San Carlos, like Redwood City, is undergoing a serious transformation. It’s anyone’s guess whether the current pace of construction will continue once this batch of projects are completed, but that pace is a result of a booming economy that is causing rents to rise and pushing out small retailers such as Geoffrey’s Diamonds. It is always painful to see popular merchants leave an area. While I do hope that Geoffrey’s can find a place in the transformed San Carlos, I must say I’m not optimistic. They say that “diamonds are forever,” but, perhaps in our part of the country, they are not…

7 thoughts on “Diamonds are not Forever”