Tuesday afternoon I flew back to the Bay Area, having spent a long weekend up in Portland seeing my kids. I got home and almost immediately headed back out, to attend the November 7 Planning Commission meeting. The Commission was scheduled to discuss and potentially submit their recommendation on the draft El Camino Real Corridor Plan to the City Council, and, because I’ve been following the plan’s development with great interest from its beginning some 18 months ago, I felt that my presence was warranted. I was particularly curious to hear the public comment on the plan, since I knew that there had been an effort within the cycling community to get people to attend and show their support.

The plan was created based on input from the public at large, numerous business owners and residents along the corridor, and a City Council-appointed Citizens Advisory Group. A consulting firm—Dyett & Bhatia—assisted with the process and ultimately wrote the plan draft that the Planning Commission discussed and, near the end of the meeting, recommended for adoption by the City Council.

The plan is divided into four main sections. The first, “Mobility,” includes a number of interesting ways in which traffic flow—for motorized vehicles, buses, bicycles, and pedestrians—can be improved along El Camino Real. The plan places a lot of emphasis on the creation of truly protected (by a curb, most likely) bike lanes, making cycling along El Camino—at least in Redwood City—feasible. This would mean the elimination of on-street parking, however, so the plan also includes ideas for dealing with the loss. The Mobility section also has a number of recommendations for improving the flow of traffic that is crossing El Camino, something that Redwood City could certainly use. And it includes ideas for improving things for both pedestrians and those of us who use mass transit.

The “Economic Vitality” section, as you might guess from the title, contains ideas for improving the effectiveness of retailers and other customer-facing businesses located on El Camino, with a special emphasis on helping them serve the needs of those living on or near the corridor. This section primarily focuses on the idea of creating “activity centers” that would ideally allow people to park once and run multiple errands.

Section 3, “Housing,” looks at ways to bring more affordable housing to an area that is rich with both transit and with shops and services that can be easily accessed on foot. It also aims to bring more balance to the mix of housing and jobs, by encouraging more “live/work” units that combine both commercial or light industrial spaces with an associated dwelling unit. This section also looks at bringing more child care facilities to the El Camino Real corridor, putting them closer to where many people live or work.

The fourth section of the plan is titled “Place Making.” In a nutshell, it aims to “spruce up” the look of the El Camino corridor and improve the image of both El Camino Real and Redwood City itself.  While that may mean better plantings in the center strip and along the sidewalks, public art, parks and plazas, and (perhaps) better lighting and more amenities such as benches, to my mind it also means making something of a statement at the city’s boundaries. And that is what got me out on foot this week, taking a close look at our borders with San Carlos and with Atherton and North Fair Oaks, reviewing how we say “Welcome to Redwood City” to those approaching it along El Camino Real.

Our northern border is easy to locate, though not well-marked. The dividing line between Redwood City and San Carlos, at least in the vicinity of El Camino Real, is Cordilleras Creek. If you don’t know exactly where that is, you’ll find it just south of the Carl’s Jr. restaurant (which is thus in San Carlos):

On this visit I noted that the metal sign that used to mark the Redwood City border is no longer present. Nor are a number of free-standing newspaper boxes that used to line the curb here. As a pedestrian I certainly appreciate having fewer obstructions along the sidewalk, and I suspect very few people noticed the border sign anyway—so perhaps it isn’t much of a loss. For their part, San Carlos has placed a sign in the center median telling people who are leaving Redwood City that they’ve crossed the border:

The back side of this sign is blank, however, so southbound travelers aren’t immediately informed that they just entered Redwood City.

Redwood City does have a nice sign a few blocks to the south, in front of the old San Mateo Pet Supply (which, incidentally, no longer seems to be a pet supply store). Because it is only a couple of blocks from the actual border, this sign is probably a sufficient welcome to southbound travelers along El Camino Real: 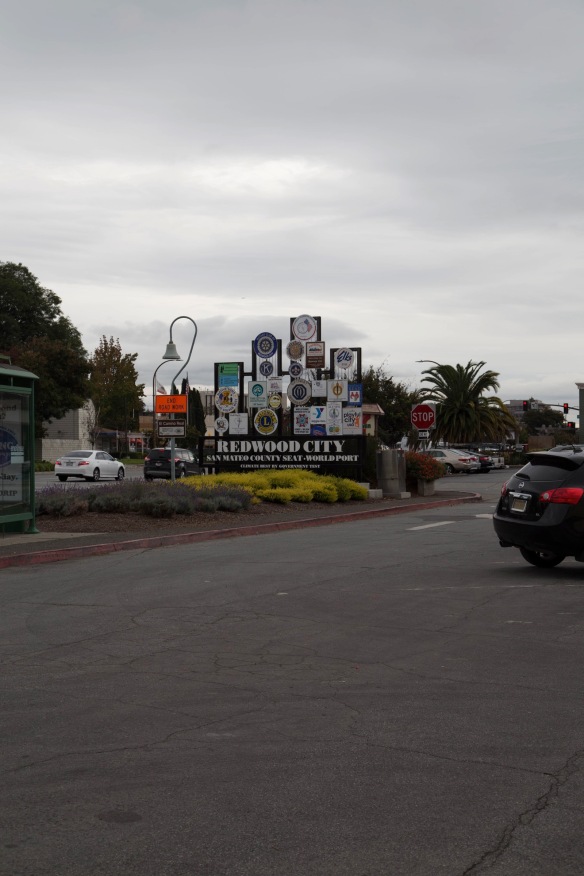 While I was in the area, I checked in on The Grove (the eight-home subdivision that has been under construction on Finger Avenue and that backs onto Cordilleras Creek). It is finally complete, and about half the homes have already been sold. They look nice from the outside; if you, like me, enjoy touring for-sale homes, you might want to check out the remaining ones while they are still on the market.

I also peeked over the construction fences around the twelve-unit condo development planned for the long-empty lot adjacent to the old Mountain Mike’s building, and was pleased to note that construction appears to have resumed. I had been told that construction had been held up while some utility work was being done, and the long asphalt scars along and across El Camino, Avondale Avenue, and the surrounding sidewalks attest to the veracity of that statement. Next door, the Mountain Mike’s building continues to rot away—but now there is a prominent for sale sign that bills it as a “development site”—so expect that old building to finally be torn down once a developer has figured out a profitable use for the property.

After prowling around our northern border, I headed down to our southern one. Whereas the northern border is nice and clear, with the creek marking the division between Redwood City and San Carlos, our southern border, at least in the vicinity of El Camino Real, is messy and hard to discern. That is because Redwood City extends much further to the south on the western side of El Camino Real than it does on the eastern side.

Heading south, after you pass beneath Woodside Road, all of the businesses on the right side of El Camino Real—University Art, the Ferrari dealership, Kensington Place (the memory care facility), Atherton Park Inn & Suites, and Jackson Square Fine Jewelers—are within Redwood City. Only when you see the ivy-covered fences that mark the first Atherton residences do you know that you’ve left the city. And if you are on foot, you’ll know that you’re at the border because that is where the sidewalk comes to a dead-end:

Stand on the sidewalk in front of Jackson Square Fine Jewelers and look across El Camino, however, and you won’t be looking at Redwood City. Instead, you need to turn your head to the left and look way back towards Woodside Road. On the eastern side, northbound travelers on El Camino Real don’t actually reach Redwood City until they get to the Target shopping center.

In the above photo, the concrete block building on the left is the Verizon Wireless store, which is part of the Target shopping center. It is located within Redwood City. But the Dependable Lock and Hardware store that abuts the Verizon store? That one is in North Fair Oaks, which is an unincorporated part of San Mateo County. Indeed, the city limits slice right between the two buildings—which are so close together you might have a hard time sliding a hand between them. Why the border is here, and not, say, three doors down at Northumberland Avenue, is beyond me. Either way, though, the way our border runs means that a number of businesses on this side of El Camino—including the Eco Green Auto Clean car wash, the Planned Parenthood clinic, and, yes, the Hanky Panky Gentlemen’s Club—do not actually reside within Redwood City proper.

Given the fact that our southern border differs rather substantially depending upon which side of El Camino you are on, it’s hard to say where a suitable “Welcome to Redwood City” sign should be placed. Me, I would try to place it near either the Verizon store or the Jackson Square store. So where did Redwood City actually place it? Quite a ways north, actually, at Chestnut Street:

The distance between this sign and Jackson Square is a full mile. That’s a lot of Redwood City to go through before you are officially welcomed to it! And, I should note, you will have already passed one of the newest additions to our cityscape: the W. L. Butler headquarters building, which Butler is erecting behind Broadway Cleaners.

Regardless of where the welcome signs are actually located, as someone who spends a lot of time on El Camino I’m all for sprucing up the corridor. I’m really glad that “beautification” is one aspect of the Corridor Plan that might actually happen sooner rather than later, and look forward to seeing what the city actually does. Many aspects of the plan require developer cooperation and/or monies that the city does not yet have, so, for instance, I don’t expect to see wider sidewalks except in front of new buildings. And whereas a protected bike lane is a key component of the plan, there are enough obstacles to overcome that I don’t expect to see that for at least a handful of years. But assuming that the City Council approves the plan, the city will be watching for ways to make the plan’s visions a reality.

The El Camino Real Corridor Plan is the result of a lot of hard work, which is worth applauding. It presents a number of thought-provoking ideas that really do seem as if they’d improve movement both along and across the corridor. I find it well written and easy to read, and I recommend that people check it out. And if you are interested in how the plan was developed, take a look at the Corridor Plan’s project page on the city’s website.

6 thoughts on “Welcome to Redwood City”