I grew up in Southern California, so very occasionally–every few years or so–I had the privilege of going to Disneyland. Disneyland was, and still is, a magical place for a child. Disneyland is the result of several ideas and dreams that coalesced within Walt Disney’s brain, such as the idea that there should be a place that both kids and parents can enjoy, Walt’s disgust at the lack of cleanliness found at the typical carnival or circus, Walt’s love of trains, and Walt’s love of miniatures.

Walt collected a great deal of dollhouse-sized furniture and other such miniatures, and even built some with his own two hands. At one point, before the idea for Disneyland came into being, Walt gave serious thought to creating a moveable exhibit consisting of miniature dioramas that would travel around the country. When Walt got into trains he created a garden railway in his own yard, complete with 1:8-scale working steam trains that people could actually ride on. His Carolwood Pacific Railroad had about a half-mile of track, and was very popular with the neighborhood kids: he loved to play engineer and give rides to visitors.

The creation of Disneyland gave Walt a new outlet for his model building. The train that even today runs around the park–which is considerably larger than what he had in his yard–allowed Walt to play railroad engineer on a whole new scale. And several rides and exhibits throughout the park allowed him to show off various miniature environments. These days the trains remain, but many of the models that were once found throughout the park have disappeared. I still have fond memories of the post-show segment of the former Carousel of Progress attraction: after the show (which took place in an amazing theater in which the audience rotated around a fixed circular center stage–somewhat like San Carlos’ old Circle Star Theater), we were directed to the second level. There we were presented with an enormous model of “Progress City”–a utopian vision for a futuristic city that Walt hoped to someday build in Florida. (Walt died before the city–which was known as the “Experimental Prototype Community of Tomorrow,” or EPCOT–could be built; instead, the name was used for a new type of theme park on the company’s Florida property.) I spent a lot of time gazing at that futuristic city model–I loved it almost as much as I loved the Carousel of Progress show itself (which today survives in a modified form at Walt Disney World’s Magic Kingdom).

My fascination with Walt’s futuristic city model likely explains why I love looking at the giant model of Redwood City’s downtown, which you’ll find in the lobby of our City Hall. If you’ve never had occasion to set foot inside City Hall, or if you’ve been there only to pay a tax bill or consult with the Planning Department, you may not be aware that such a thing even exists: the model is located far from where most of the city’s day-to-day business is transacted. Only if you’ve entered City Hall through the back door, or if you’ve attended a meeting in the City Hall Council Chambers would you likely have noticed the model, since it is located between the rear entrance to City Hall and the door to the Council Chambers: 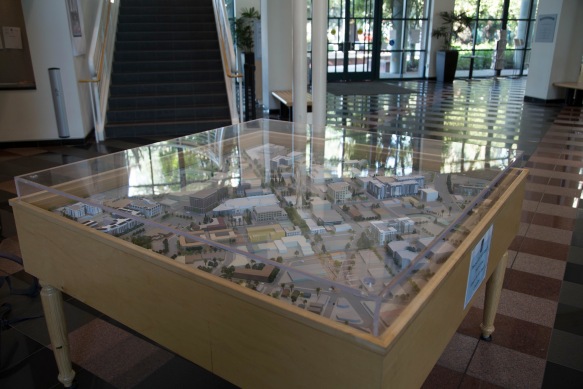 The model, which is maintained by the City’s Planning division (the miniature buildings are constructed by an outside company at their behest), provides a fascinating birds-eye view of Redwood City’s downtown. Because it is built into a large free-standing table (carefully protected by thick plexiglas), you can view it from any side and focus on any project in which you are interested.

The model is regularly updated, so almost every time you look at it you see something new. And because the model appears to be updated almost as soon as a new building breaks ground, what you are seeing is actually something of a glimpse into the future: the model doesn’t show what our city looks like today but instead shows what our city (well, downtown, anyway) will look like once the projects currently under construction are completed. Since developers need to submit project plans to the city, the model builder can use those plans to create a miniature of the building and add it to the downtown model well before the actual building opens for business.

Since the angle of the model in the above picture and the glare on the protective cover make it a bit difficult to see some of the in-progress buildings, I took some photographs of the various building models. Here is a close-up showing the large Greystar III apartment building being built on El Camino Real as well as its sister project, Greystar II, that is going up on Jefferson at Franklin Street:

Greystar III, which faces El Camino Real, is at the top center of the picture. Greystar II, which is across Jefferson from Sequoia Station, is the brown-and-white building with the curved side in the right-hand portion of the above. As for the large black-and-white development shaped like a “C” (or is it a “G”?), that is the Franklin 299 apartment complex, which was also built by Greystar. Both Franklin 299 and Greystar II are up against the railroad tracks, which in the model are those two narrow parallel strips that angle up from the bottom center of my picture.

The 601 Marshall Street project–the 8-story office building that is rapidly being finished across from our downtown Bank of America branch–no longer requires one’s imagination to envision how it will look when completed since the outer skin is nearly complete. But Redwood City’s downtown model has had a version of this building for some time now, one which prominently shows the L-shaped building’s signature feature, its cylindrical corner lobby:

One project that will still require your imagination for some time to come, given that the contractors are just now beginning to excavate for the building’s two-level subterranean parking garage, is the four-story Broadway Station RWC building. The rendering on the city’s project page  goes a long way towards letting us know what the combination office building/retail space should eventually look like, but the downtown model does a much better job of showing off just how the building will fit into its urban surroundings:

In the above picture, the rooftop in the foreground is from the Century Theaters building (the rounded corner is the entrance to The Old Spaghetti Factory), and the rather empty parking lot you can see at the top of the frame is the Main Street parking lot. The little brick-colored box just to the right of the Broadway Station RWC building is the former site of Howie’s Artisan Pizza–soon to be “Pasha Mediterranean.” And to the right of that, past the narrow green parkway, is the Jefferson Street Post Office. Note how the models for new projects are constructed in great detail, while almost all of the existing buildings are represented by mostly featureless boxes.

Next up is the unusually shaped office building being built at 550 Allerton Street. I have written about this building before, noting its unusual up-tilting roofline and its rather unorthodox parking arrangement (in order to squeeze enough cars into its two-level underground garage, they will all have to be valet parked, and there wasn’t room for a ramp between the garage levels so cars go up and down in a pair of automobile elevators). Another rather interesting aspect of this building is the way it is placed rather tightly up against an existing small office building. Interestingly, the model doesn’t even show the neighboring building at 500 Allerton, which in real life sits in the “notch” formed by the new building (and which in the model is occupied by a tree):

In case you aren’t familiar with this project (which sits behind the downtown county buildings), here is a photo of the real thing taken from across the street (kind-of where the light is being reflected off the model’s protective cover in the above picture):

Here is one final under-construction project, which is squeezed into one corner of the model:

Your clue here is the fact that the project is shown in great detail while the surrounding buildings are basically just boxes. The street near the left edge of the image is Veterans Boulevard, while the street along the right edge of the picture is Main Street–this project actually has frontages on both. Of the two featureless boxes below the project, the left-hand one is in reality our In-N-Out Burger franchise. Just above the project are two rectangular boxes connected by a square box: these are not part of the project but instead represent an existing multi-story office building. This project, which is shown here in grey, black and white, is the 849 Veterans Boulevard apartment complex. When complete, it will contain 90 apartments (7 of which will be affordable at the very-low-income level) on four floors above two nicely disguised levels of parking.

I do love this model, and strongly encourage everyone who is interested in Redwood City’s downtown development to drop in and check it out. While the model’s maker might regret not making it a bit bigger–a few upcoming projects, which might not technically be downtown but aren’t far from it, would be beyond the model’s edges–it does do a great job of representing Redwood City’s actual downtown. I spend a lot of time walking around our downtown gathering material and taking pictures for this blog, and I could almost save myself a lot of time and shoe leather by simply photographing and reporting on changes to the model, rather than visiting the actual project sites. Not really, of course, but it almost seems that way…

Allow me to include one final picture from the model, one that shows just how insanely detailed this thing can be. Of course the model maker has included Redwood City’s larger buildings, but I was delighted to see that the small condo complex at the corner of Brewster Avenue and Warren Street (and Fuller Street)–Classics At Redwood City–has not been overlooked. This complex, which in the real world was completed a little over a year ago, consists of eighteen free-standing three-story buildings (on top of a large subterranean parking garage)–and all eighteen individual buildings are present in all their glorious detail: 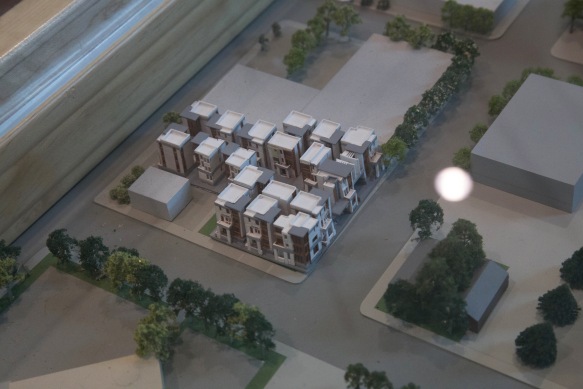 Just look at those balconies and entryways! That model maker must really love their job…

At next Tuesday’s Planning Commission meeting (November 7 at 7:00 p.m. in the City Hall Council Chambers) the Commission will be considering the initial draft of the El Camino Real Corridor Plan. Assuming that the Planning Commission is okay with it, the plan, with any recommendations from the Planning Commission incorporated into it, will be passed on to the City Council for their own review and approval (currently scheduled for the City Council’s December 4 meeting). Given that this will be one of our very last opportunities to make public comments on the plan, if you are at all interested I suggest that you read the plan and then attend Tuesday’s meeting. And while you are there, do be sure to check out Redwood City’s downtown model!

3 thoughts on “A Model City”