I was just one of those weeks. I had to be in Portland on Tuesday, which meant traveling on Monday and Wednesday. Knowing that I would have so little time in Redwood City, I took some time last weekend to prepare for this week’s post. But while I was gone, a number of interesting and important things popped up: things that I really should be writing about. So I tossed my plans aside, put on my hiking boots and sun hat, and on Thursday morning hit the streets.

I didn’t have to walk far before reaching the first new thing: a banner that appeared in Stafford Park while I was gone (a copy of this banner can also be found in the “parklet” bounded by Hopkins Avenue, Broadway, and Duane Street):

This banner was put up by the city to show all of the changes that they propose to make to Hopkins Avenue in an effort to make it safer. Stafford Park, which sits on Hopkins Avenue, is an important focus of the Hopkins Avenue Traffic Calming Project (also known as the Hopkins Avenue Traffic Safety Project), so two of the largest changes would be applied to the ends of the block on which the park sits. Where Lowell Street crosses Hopkins, the city would like to add curb bulb-outs to shorten the distance a pedestrian would have to walk, plus a flashing crosswalk signal. And where King Street crosses Hopkins, the plan again shows bulb-outs along with a raised crosswalk. The raised crosswalk not only eliminates the need to step down and step back up when crossing the street, it would also act as a speed bump of sorts, providing a physical reminder to speeding cars that they need to slow down.

A few other intersections along Hopkins—namely, Fulton, Hudson, and Nevada—would gain bulb-outs on some or all of their four corners. Short landscaped medians would be added in some sections of Hopkins, making the traffic lanes feel narrower (which tends to slow traffic) and adding beauty while still allowing for left turns in and out of driveways. A “raised buffer feature” in the three blocks closest to El Camino Real would provide added protection for cyclists while still allowing vehicles to cross the bike lane in order to get in and out of driveways. And finally, the strange way in which Hopkins Avenue intersects with Alameda de Las Pulgas would be altered so that cars traveling south on Alameda and turning left onto Hopkins would have to make a proper 90-degree turn: today’s diagonal “cutoff” would no longer be an option for them. Note, however, that cars traveling westbound on Hopkins would still be able to use the cutoff to make the right turn onto northbound Alameda.

Visiting either of the parks in which the banners have been installed may be the best way to study the plan in detail. But the plan is also online, and you can see it here: http://www.redwoodcity.org/home/showdocument?id=13146 (zoom in and scroll around to see all of the plan’s details). However you elect to check it out, be sure to make your opinion known. The city won’t proceed unless they’ve gotten a sufficient number of favorable votes on the project, so do let them know your thoughts either by going online or by filling out and returning the paper survey that was mailed to residents in the affected neighborhoods. The city needs to hear from us by December 18 in order for out votes to count, so don’t delay.

Next up, although the project’s page on the Redwood City website still shows the project status as “Application Deemed Incomplete,” it appears that our future Tesla dealership and service center is indeed moving ahead. I heard from two separate individuals, both of whom are members at Crunch Fitness, that members are being notified of Crunch’s imminent closing (of this location): 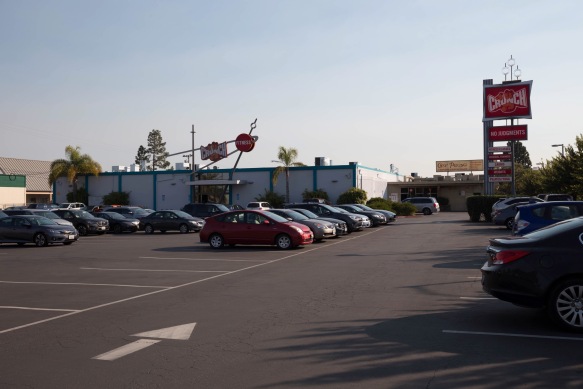 According to the notice I saw, the fitness center will be closed as of Sunday, January 28. And quoting from that notice, “Tesla’s new sales & service center will soon occupy this space.” Members are being given the option to either transfer their membership to one of Crunch’s other Bay Area clubs, or they can cancel.

I went by Crunch on Thursday to take the above photo. While there I checked the entry doors at Crunch and at Chef Peking Chinese Restaurant (which will also need to close at some point; Tesla will be occupying their space, too) to see if there were any signs of their impending closure, but there was nothing visible from the outside.

Just down Whipple, at the corner of Whipple Avenue and El Camino Real, a project was recently proposed for the corner now occupied by the empty “Village Bottle Shop”:

In fact, the project will be larger than just the liquor store space: it will also consume the Edgewood Wash and Dry Laundromat (to the left of the bottle shop) and the Royer Realty building (behind the bottle shop, along Whipple). It appears that Royer owns all three parcels and is proposing to combine them into a single large one upon which they would then build a four-story mixed-use building. That building would contain 34 apartments (two of which would be affordable at the “very low” level), 16,500 square feet of commercial space, and an 88-car garage that would employ both mechanized car stackers and a valet in order to squeeze in so many cars. The apartments would all be located on the top two floors, while the second floor and a chunk of the ground floor would be commercial space. Parking would be primarily in a below-ground garage, along with some spaces on the ground floor. According to the plans only two of the project’s 34 apartments would be two-bedroom units; the rest would have a single bedroom. Entry to the residential areas would be off Whipple Avenue, roughly where the Royer Realty building is today. The commercial spaces would be accessed from either the building’s main corner entrance or via other doors opening onto El Camino Real.

The conceptual plans for the project include a couple of renderings, so we do have some idea of just what is being proposed:

Quite a difference, eh? This project is in the extremely early stages, so don’t expect to see it come before the Planning Commission or the City Council for a while yet. In the mean time, expect the empty liquor store to continue to remain empty.

While I was in Portland I received some disappointing news from our Assistant City Manager/Community Development Director, Aaron Aknin. It seems that the Hallmark House Apartments on Woodside Road, which were severely damaged in a fire back in 2013 and which have been sitting, only partially reconstructed, for a number of years now, won’t be coming back online any time soon. The current owner has been trying to obtain the necessary financing to restart the rebuilding efforts but has been unable to do so. Thus, the owner has decided to put the property up for sale. Fortunately the restrictions that keep the 72 apartments affordable remain in place: any new owner must continue to lease the apartments to households earning at or below the very-low income level. Unfortunately, though, this means that the building will continue to sit empty, draped in green construction fabric, for quite a while longer.

One place that won’t remain empty for much longer is the old Pasta Pomodoro storefront in the small center at the corner of Whipple Avenue and El Camino Real (just across Whipple from the Royer Realty building). I went by today and was delighted to see that the interior of the restaurant space is being refitted for a new tenant: “Hikari Japanese Restaurant.” I snapped a picture of the goings-on inside, for those of you who, like me, are curious about these things:

In other good news, the soil remediation project that temporarily took out the small parking lot in front of Ike’s Lair and Bangkok Bay Thai Cuisine is largely done. Most of the construction fences have been taken down, the concrete parking lot has been re-poured, and on Thursday, when I visited, workers were busy rebuilding the trash enclosure:

(That roof structure sitting in the middle of the lot in the above photo was just there temporarily; shortly after I took this picture it was moved to its permanent new home in the trash enclosure and painted white.) By Friday it appeared that the lot was being cleaned up and made ready for use once again, so by the time you read this it may well be open.

Lastly, on Wednesday evening I dropped in on the open house that Jay Paul Company held to once again present its massive Harbor View Place office project to the public. I had hoped that there would be noticeable changes to the project in order to make it more palatable to the residents of Redwood City—I had heard some rumors that there might be—but no, the project they presented on Wednesday was almost identical to the one that they presented in an open house last summer. The one (small) change I did catch was a proposal to slightly alter the southbound Highway 101 off-ramp at Woodside Road to better separate cars that want to head west on Woodside Road from those wanting to head east on Seaport Boulevard. Other than that, the project as shown on the Redwood City website is still what Jay Paul Company is hoping to get approval for.

That about covers the recent activity that caused me to toss my original plans for this week’s blog post. Of course, I didn’t actually toss them: I simply put them back into the electronic file I use to keep track of what I want to write about, and thus I’ll be writing that planned post soon (next week, most likely). So although this was just one of those weeks that didn’t quite go as planned, it all worked out in the end, thankfully.

8 thoughts on “Just One of Those Weeks”