I ended last week’s post by mentioning that I had gathered far more material than I could share in a single post. Accordingly, this week I’m passing on more of what I observed on my walk, along with a couple of other items that seem equally of interest.

Last week’s post, which I titled Along the Way, began with a map of my walk and a mention that I went farther than my primary goal, which was the Buckingham Apartments on Buckingham Avenue. I walked farther down El Camino Real than necessary because I wanted to peer into the former Pool, Patio & Things building (also known as the Franciscan Forge). Pool, Patio & Things closed over a year ago. At that time I was told that the building had been sold and would be divided up into multiple office spaces. However, since then there has been absolutely no visible activity at the site. My walk there confirmed that indeed, nothing really is going on: the building still sits empty, as it has done since the business closed. I checked the permits on the site and noted that there is a current one, issued in March of this year, for minor renovations consistent with what I had been told. But it has been six months since the permit was issued, and…nothing.

Back in Redwood City, I’ve also been watching the two empty spaces in the Box building that face North Plaza. Because I had heard that one of them was slated to become a wine bar, here, too, I’ve been eagerly watching for signs of activity. Recently both spaces were cleared out (they had held some residual construction materials from when the building was built) and a couple of weeks ago construction began within one of them. On my walk I went by to check on it, and was delighted to see not one, but two liquor licenses—one on each space!

Just so we’re clear, here are the two spaces I’m talking about:

Note the two sets of double doors in the above image? Each opens onto one of the available spaces. And both now have liquor licenses affixed to them. Note, too, how they open onto the plaza: I wouldn’t be surprised to see one or both of these sport outside seating when they open to the public.

As for the businesses themselves, here is what I’ve learned so far:

While I was there I noted the clever and interesting signs that were added to the “Crossing 900” buildings that are occupied by Box, Inc., and where Cru and Maebar hope to soon open: 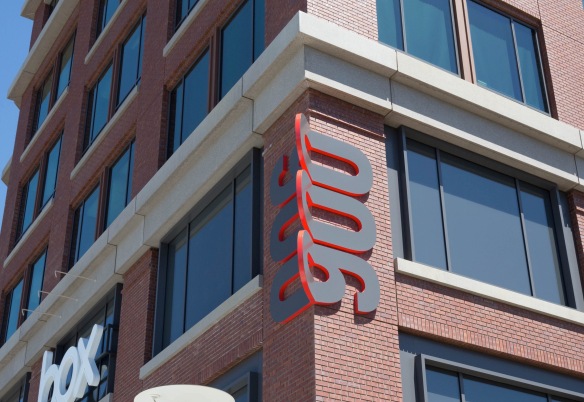 I love how they managed to make this one sign show “900” from both sides of the building. Some clever person recognized that the top of the nine and the top of the zero are the same shape, and thus could be shared by the bent portion of the numbers.

Continuing with the artistic-signs-on-buildings theme, because I hadn’t been there in a while I wandered over to the Perry Street parking lot (behind City Pub) and was delighted to see the latest addition to our little outdoor gallery. The back side of the All Star Karate Studio (at 2636 Broadway) now sports some lovely green dragons:

Although the business signage is a bit more prominent here when compared with the other murals along our Commercial Way Mural Corridor, the dragons are still pretty neat. This mural is a nice addition to the increasing number of public art installations popping up around the city. Lately I’ve noticed quite a number of new utility boxes being painted; it’s getting harder and harder to keep track of them all! 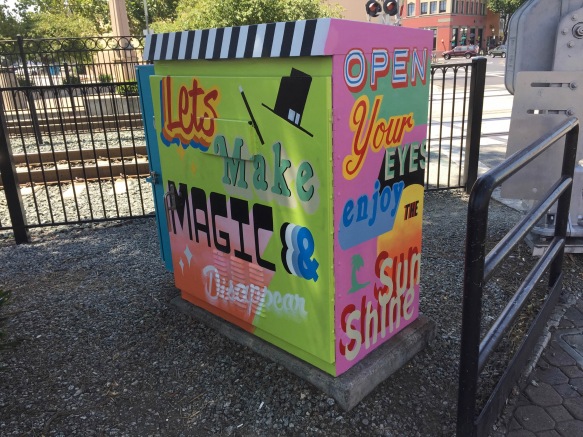 I particularly like the one shown above: you’ll find it where Broadway crosses the Caltrain tracks. I’m also digging the “day of the dead” themed box at the corner of Jefferson and Marshall, by the Bank of America.

Our public art isn’t all paint, of course: as I walked down Middlefield Road I passed Jardin de Niños park, and was delighted to see the latest additions to their lovely tile sign: 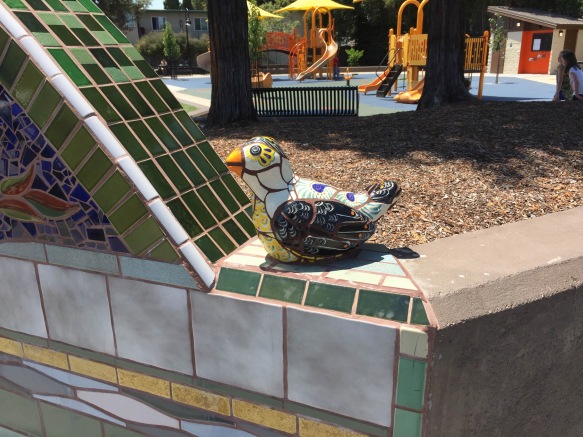 The sign sports two of these, one on each side. They may have been there for a while; admittedly, I haven’t been by that part of the park recently. But they definitely weren’t there last Christmas, when I previously reported on the sign’s construction. If you haven’t been by this magnificent little neighborhood park at the corner of Chestnut Street and Middlefield Road, I highly recommend a visit, if only to check out the many artistic details.

Lastly, related to public art, while passing our Costco on Middlefield Road I snapped a picture of something I’ve seen in at least two other places in Redwood City:

We’ve gained a lot of neat sidewalk paintings lately, but this one isn’t one of them. This is advertising, pure and simple, on public property. I can’t imagine that this is legal! It advertises the Neologian Art Gallery, which isn’t even located in Redwood City—it’s in San Mateo. In case someone from the city would like to take action, I’ll note that there is another of these on the sidewalk along Hopkins Avenue, in front of Stafford Park.

Getting away from art, based on something I caught in one of the city’s Economic Development Newsletters it seems that the latest addition to Sequoia Station will be Sleep Train. They plan to take over the old Dress Barn space, next to CVS:

Sleep Train can currently be found at 2341 El Camino Real, at the corner of Charter Street (near Target). It isn’t clear to me yet whether they’ll be moving, or simply opening a second store. Not having been in Dress Barn before I think that this new space is smaller than what they currently have on El Camino Real, which would point towards this being a second location—but I also don’t know much about the mattress business, so perhaps they can get by with a smaller space.

Next up, the old Jefferson Pharmacy space at 3137 Jefferson has found new life as a Nine Lives Foundation Low Cost Spay/Neuter Clinic. The Nine Lives Foundation, which “rescues cats and kittens from high-kill shelters and at-risk homeless situations” and then houses them while working to find permanent homes, has their shelter over on Rolison Road. This new site is a veterinary medical clinic where they will provide low-cost spay and neuter procedures, and will administer vaccinations. It will also serve as a center for cat and kitten adoptions (on weekends only) and will retail products aimed at keeping your cat happy and healthy. Although their grand opening is scheduled for Friday, August 26, they quietly opened the clinic on Monday, August 1, so feel free to give them a visit.

The Nine Lives Foundation had been in danger of losing their Rolison Road shelter, but according to the San Mateo Daily Journal they’ve managed to strike an agreement with their landlord that allows them to remain at their existing location. However, as part of that agreement they need to remodel the facility, which means that they still need to find homes for the shelter’s remaining feline occupants. Plus, that remodel is going to cost in excess of $500,000. Given that the Foundation appears to rely entirely on donations from the private sector, if you have a soft spot in your heart for cats, check them out and consider donating money and/or adopting a cat. 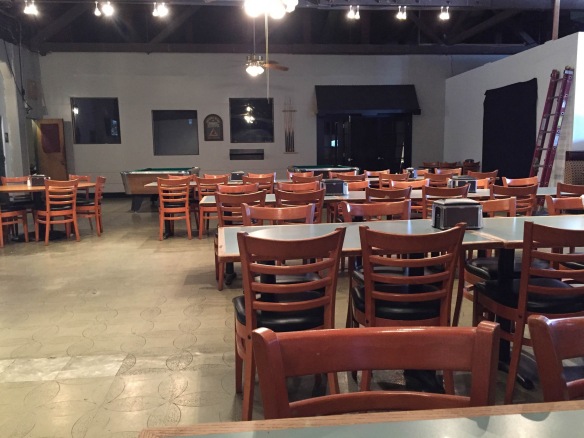 Finally, I had an opportunity to drop in on Pizza and Pints and give them a try. I had a slice of pepperoni pizza, and it was pretty good. Not Vesta-level good, of course (but what pizza is?!?) and not even up to the level of Howie’s, but I enjoyed it nonetheless. I was pleased to see that the interior of the place was clean and fairly bright: prior to its reopening I had peered through the glass doors, and the place had looked dark and dirty. But Pizza and Pints is back open for business, sans the pipe organ that gave them their previous name of Pizza and Pipes. They have two nice-looking pool tables, a couple of TVs on the wall showing sports, and a fairly decent bar at which you can sit. They do not have any video games or other kid-focused activities, completing the transformation from a place aimed at the younger crowd to one that is geared more for the adult set.

Walking around Redwood City as I do continues to supply me with new material for this blog: there is so much going on around here! From large buildings under construction to restaurants reopening with a tweaked format to new public art popping up all around the city, change is everywhere. As you navigate the city keep your eyes open for changes both big and small; it’s amazing what you can find along the way.

Redwood City’s website just added a page where you’ll be able to find all of the city’s public notices in one place. It is a great way to find the latest updates for projects throughout the city. Check it out at http://www.redwoodcity.org/residents/public-notices.

1 thought on “Along the Way, Again”