Some of my best walks are those where I aim for a specific location but discover even more interesting things along the way. That was the case for this week’s walk: I had a particular target in mind, but as I walked I was forced to admit that even I don’t know everything that is going on in our city and its surrounding environs.

My goal this week was the Buckingham Apartments. While reading about the recent sale of this 52-year-old Buckingham Avenue apartment building, I found myself wondering just where Buckingham Avenue was. The article pegged it as being in Redwood City, but a bit of quick research revealed that in fact Buckingham Avenue is three blocks beyond our borders, in North Fair Oaks (which is an unincorporated part of San Mateo County). Because it was still within walking distance, however, I set the apartment building as my target and then assembled a list of other sites I wanted to visit that were somewhat on the way.

My walk, which I took on Tuesday, ended up being quite long (eleven and a half miles!) and somewhat rambling. Just to give you an idea of what one of my walks is like, here is a Google map showing the route I took that day: 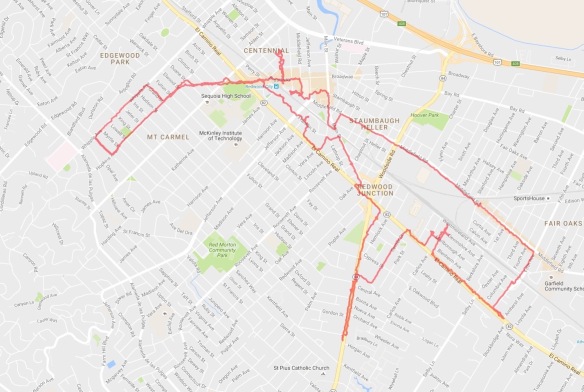 If you study the map closely you’ll note that not only did I walk well beyond Buckingham Avenue, I also wandered through downtown and partway up Woodside Road. Some of what I observed I’ll cover here; the rest I’ll hold for a future post.

To begin with, here is the 48-unit Buckingham Apartments building:

It looks to be in reasonable shape for its age (it was built in 1964). According to the Silicon Valley Business Journal article, apartments in this building are currently leasing for about 40% below what the market usually gets for comparable units. So, naturally, the new buyer plans to renovate the building and raise the rents.

While I’m a supporter of capitalism in general, I do wish we could find a way to put the brakes on this kind of behavior, which will likely force many of the building’s tenants to relocate. As Redwood City housing prices continue to rise, North Fair Oaks has been looked to as a haven for more reasonably priced housing. But it seems that that is changing…

After taking the above picture I then turned around and took a picture of the building that was right behind me. This building was labeled “St. Francis Center,” and although it was obviously church-related, I had never heard of it before—and it didn’t appear to actually be a church. Here is that building:

This particular building, as it turns out, houses the Holy Family School of St. Francis Center, a very small (only 26 students!) private K-6 school. The school is apparently one of the area’s top-performers, and serves “the poorest of the poor,” according to Sister Christina Helmsley, the center’s executive director. Next door is a small apartment building also run by the center, presumably also for those who can’t afford our area’s prohibitive rates.

Since I hadn’t been in this particular part of North Fair Oaks before, I decided to “follow my nose” and do some exploring. In doing so I quickly came across the nearby Siena Youth Center (at 2625 Marlborough Avenue) which, as it turns out, is also run by the St. Francis Center. Siena is aimed at offering young people “a positive place to become and stay healthy, to interact with others in the community, to receive mentorship and provide leadership.”

Across from the Siena Youth Center I noted a now-empty lot enclosed by construction fencing, with signs indicating that W. L.  Butler is developing the property. When I got home I did some research and learned that Butler is in the early stages of construction on a “9,577 square foot gym/recreation center, that includes a caretakers living unit and office space to serve as the San Mateo County Sheriff’s substation, on the 11,193 square foot vacant St. Francis Center parcel.” So this lot, too, is connected to St. Francis Center, and, by extension, to the Siena Youth Center.

All-in-all, I’m delighted to have discovered the St. Francis Center; it appears to be a great organization doing some much-needed work in our area.

Near the Siena Youth Center I also noticed two large and incredibly well-organized community gardens that are located on the Hetch Hetchy waterline easement. Here’s a picture of one of them:

Given the names posted over the garden’s gates—Sagrada Tierra De Guadalupe and Santa Rosa De Lima—I suspect that one or both of these gardens are also connected with St. Francis Center. Whether or not they are, they are wonderful illustrations of what can be done with the Hetch Hetchy waterline easement that scythes through North Fair Oaks and through Redwood City. Incidentally, although I didn’t learn about it until later, and have thus yet to visit it, North Fair Oaks has another community garden on the Hetch Hetchy easement: Friendship Park. Friendship Park was constructed in 2014 and is located at the corner of Huntington and Berkshire Avenues. I can’t help but think that if North Fair Oaks can create community gardens like this, so can we. In Redwood City the Hetch Hetchy right-of-way occupies numerous long (and narrow) strips of land that could (and should) be productively turned into public growing grounds.

Jumping back for a second, did you catch that mention of a Sheriff’s substation in the gym/recreation center project? While walking down Middlefield Road I noticed that there is one tucked in among the storefronts near 4th Avenue. Normally I might not have paid much attention except for the fact that one of the items on the agenda for that night’s City Council meeting was an introduction to the Redwood City Police Department’s new Downtown Service Unit, a unit which will be operating out of a small substation in the Fox Theatre building. They’ll be in this space, I’m guessing: 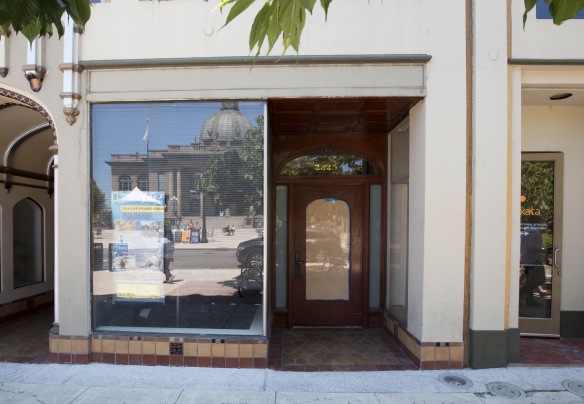 From what the team leader said at the meeting, though, it doesn’t sound as if the members of the Downtown Services Unit will be spending a great deal of time in their substation. It will be used mainly for doing paperwork, checking out information on the computer, and the like. For the most part unit members will be out and about in the downtown area, either on foot or on their rather cool patrol bikes.

One thing that they won’t be doing is enforcing parking violations—that’s the purview of the Parking Enforcement Unit. But hopefully our Parking Enforcement officers will have a little less to do now that our parking meters are being updated. I’m seeing two different types of changes as I’m out and about: the single-space meters have been updated to accept credit cards (in addition to coins) and the pay-by-space meters are being replaced by ones that are (hopefully) both easier to use and more reliable. In case you haven’t seen one of the new ones yet, here is a picture of one in the Main Street parking lot:

Very soon now contractors should be installing real-time parking occupancy signs on the Jefferson and Marshall garages, giving motorists a much better idea of how likely it is they’ll find an empty space before actually entering those garages. The city is also considering other electronic signs in strategic spots around our downtown to direct drivers to available parking.

That’s it, for now, from my walk. But I also wanted to mention two items that came up during the City Council meeting on Tuesday night. First, the city held a very brief public hearing on the issuance of tax-exempt bonds for the Hallmark House Apartments. This item went quickly and was enthusiastically endorsed by the council members. They approved the issue of some $15 million in bonds, the funds from the sale of which will go towards the “financing for the acquisition, rehabilitation, improvement, and equipping of a 72-unit multifamily rental housing project generally known as Hallmark House Apartments.” This hearing was really just a technical matter, one that was necessary in order to satisfy the IRS and various other governmental agencies. The city will have no liability with respect to the issuance of the bonds, which will be issued by and payable from a loan made by the California Statewide Communities Development Authority. The key takeaway is that financing for the reconstruction of the Hallmark House Apartments will soon be in place, and work on the 72-unit low-income apartment building on Woodside Road—which experienced a devastating fire just over three years ago—should finally resume. The building should be ready for occupancy sometime next year, returning some badly needed low-income housing to the market.

The second item was the last one on the agenda: a hearing of two appeals of the 91-unit condominium project proposed for the corner of Jefferson Avenue and Bradford Street. Previously the 603 Jefferson project had been reviewed and approved by the Architectural Advisory Committee, the Historic Resources Advisory Committee, and the Planning Commission, which normally would have been enough for the developer to proceed. However, two separate individuals appealed the Planning Commission’s decision, triggering a hearing before the City Council. The majority of Tuesday night’s council meeting (about two hours and twenty minutes worth) was dedicated to this task, and it was truly interesting to watch. After receiving a summary of the issues and a response from city staff, we then heard from the two appellants, each of whom spoke for ten minutes, from the developer (briefly), and from ten individuals who spoke during the public comment period. The members of the City Council asked various clarifying questions before the public comment period and then ended the session with more questions, a lengthy discussion, and a vote. The result? A 4-2 vote denying both appeals and affirming the project. Council members Bain and Borgens were the two members in the minority, while council member Howard had to recuse herself.

With this latest green light, expect to see 603 Jefferson break ground soon. If you would like to see the action for yourself, the recording can be found here. In the agenda that appears below the video frame, click on item 8C (“Appeals by two parties…”) to jump to the item relating to the 603 Jefferson project.

Tuesday was a busy day for me, what with the long walk and then the long City Council meeting. But although in both cases there were particular items I was specifically interested in, I was delighted with how much else I discovered along the way. I’ve shared just a couple of my discoveries above; look for more in upcoming posts.

5 thoughts on “Along the Way”