Recently I noticed a pair of articles about the old Century Park 12 theater property on East Bayshore Road (on the northeast side of 101, near Whipple Avenue). The first was in the Silicon Valley Business Journal and can be found here. The second, which summarizes the project and adds some detail, was published in the San Mateo Daily Journal; it can be found here. Both describe a preliminary proposal for redeveloping a place where, for a time, most Redwood City residents went to see first-run movies. Together those articles made me realize that as much as the downtown has been changing lately, so has the part of Redwood City along East Bayshore Road near Bair Island.

My wife and I, along with our infant son, moved to Redwood City in 1989. Four months later the Century Park 12 opened its doors on East Bayshore Road. And so began the roughly fifteen years of our lives when my growing family spent a good amount of time on the Bay side of Whipple Avenue. We saw countless movies there, of course, but also bought a car from one of the Boardwalk Auto dealers and routinely had it serviced there. We also ate breakfasts and lunches at the Diving Pelican Cafe, and dined at the Waterfront Restaurant at Pete’s Harbor. Finally, my wife took sailing lessons from Spinnaker Sailing at Pete’s Harbor (they subsequently moved to Seaport Court, off of Seaport Boulevard). All the while we were doing all this, we found ourselves spending very little time in downtown Redwood City. Other than the bank or the library, there was little to take us downtown in those days. Certainly there was nothing like the restaurants we have today—although there did seem to be more in the way of retail than there is today. When we went out for dinner back then we either went south to Menlo Park or Palo Alto, or north to San Carlos—or we went to Redwood City’s Farmhouse Restaurant (does anyone remember that place?), which wasn’t downtown.

It seems interesting that, as development goes on both in our downtown and on the Bay side of 101, my wife and I now find more and more reasons to spend time downtown and fewer and fewer reasons to cross over 101 at Whipple Avenue. These days all of the development out there by the bay is principally just adding to our housing stock. Since I’m guessing that, like us, many of you don’t go out there anymore, I thought I’d let you know what’s going on.

Let me start with some background on the Century Park 12 property. This property has been owned by the Syufy family since at least 1961, when they built the Redwood Drive-In Theater (also known as the Whipple Drive-In Theater) on the site. Starting with a single screen, by the 1970’s they had added three more to make a four-screen complex that could accommodate 600 cars. In 1986 the Syufy family closed the drive-in, and by October of 1989 they were opening the doors on the Century Park 12, a twelve-screen indoor theater. Those theaters were very popular, if our experience was any indication, entertaining Redwood City and neighboring communities for some nineteen years. In October of 2008, Cinemark, who had purchased Century Theaters, Inc. (the operations, but not the land or the buildings) from the Syufy family some two years earlier, closed the Century Park 12 for good. (There was a great deal of controversy surrounding the construction of the Century 20 Downtown Redwood City and the closing of the Century Park 12, but I’ll save that for a future post.)

The only use the property seems to have gotten since the theater was closed has been as a storage lot for the area’s car dealerships. I recently took a walk out there, and except for the fencing to keep the public out, and the weeds sprouting from cracks in the pavement, the place looks pretty much as it did when we first moved to the area. Getting a good photo through the fencing is difficult, so I’ve settled for this Google Earth view which shows not only the theater “domes” but the numerous new cars being kept there:

The Syufy family, who still own the property through their SyWest Development LLC, has been trying to come to an agreement with the city on a redevelopment proposal since mid-2004—shortly after ground was broken on the downtown theater complex. The current preliminary proposal is just the latest. It calls for a gigantic (100,000 square foot) health club along East Bayshore and 550 apartments (275 one bedroom, 275 two bedroom) in three six-story buildings arrayed along the back of the property. Here is one of the renderings accompanying the proposal (click it for a larger version):

It is important to note that this proposal is only preliminary: it is not an official project at this point. The developer is simply floating a concept to see how it would be received. There are still some hurdles that need to be surmounted before something like this could become real, such as:

While the Century Park 12 property is just a proposal, there are other projects in active development just down the street that are worth noting. The nearest, at the roundabout where East Bayshore Road intersects with Bair Island Road, is where our new Courtyard by Marriott hotel is being constructed. The foundations have been completed and the walls are starting to go up: 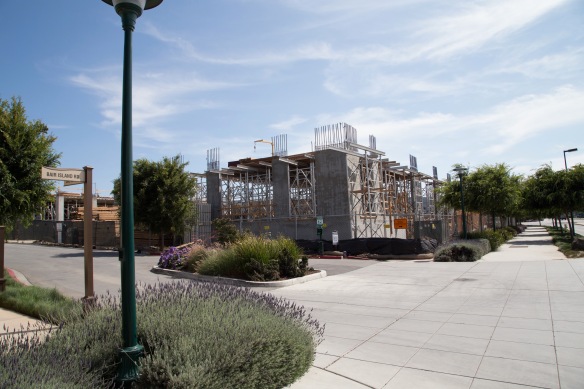 You can see this project from 101 as you sail past. It will become increasingly visible as the project rises into the air, since this 177-room hotel will ultimately reach five stories in height. It will have parking on its first and second floors, along with the hotel lobby and support operations. The guest rooms will be on the upper three floors, which will overlook a central, open-air courtyard with a pool and spa. The hotel will also feature a restaurant, bar, and lounge, plus a coffee shop and meeting spaces.

Pass by the hotel, One Marina, and The Villas at Bair Island, and you get to Pete’s Harbor. At least, you did: nowadays you get to “Blu Harbor”, the new name for the area at the end of the road. Ever since the liveaboards and other boats were kicked out, the property has been closed to all public access. For some months now construction has been taking place behind construction fencing, making it hard to see what is going on. But there are ways to get a peek. The easiest is to head out onto Bair Island and then look at Blu Harbor from across the water:

For another angle on this property, head to Penboscot Drive, in the Seaport Boulevard/Chesapeake Drive area. You can get a nice view back towards the west, right into Blu Harbor’s inner harbor:

Or, if you know someone who lives in The Villas at Bair Island (immediately adjacent to Blu Harbor), you can climb to the top floor of their buildings and look out over the construction fencing: 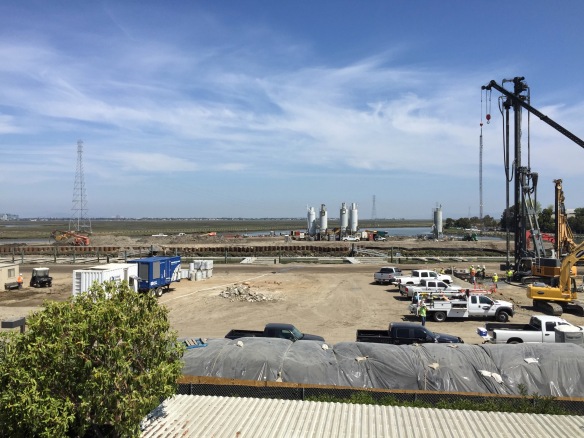 In the center of this photo you can just barely see the docks for the inner marina. Soon that view will be blocked by a huge 6-story, 308-unit apartment building wrapped around a 7-story parking garage. Arrayed along the far side of the marina (where those white vertical tanks are standing) and to the left (outside the bounds of the picture) will be ten smaller buildings, some with nine apartments and some with ten. Altogether, there will be 402 apartments built at Blu Harbor.

The Blu Harbor project is in the very early stages. Currently they are raising the land to protect against king tides and sea level rise. Early stages or not, though, they are already taking names for a waiting list, and plan to begin “pre-leasing” units sometime next year.

With so much construction going on both out by the Bay and in Redwood City’s downtown, the shift in where my wife and I spend our time fascinates me. Downtown has come alive, while, except to explore Bair Island or visit the Boardwalk auto dealerships, the area on the Bay side of Whipple Avenue is no longer of interest to most—which is not necessarily a bad thing, since we’ve gained more downtown than we’ve lost out by the Bay. Still, it’s easy to focus on the downtown construction and forget that there are other areas of the city that are experiencing their own drastic transformations. Although Redwood City is changing, we must be sure to always look at the whole picture, and not just our suddenly booming downtown.

9 thoughts on “A New Century”