The other day I received two letters in the mail. One clearly was junk, so I promptly tossed it into the recycling. The other, though, was hand-addressed in such a way as to make me think that it was from a child. Curious, and assuming that it was a request for a charitable donation, I opened it. To my surprise it turned out to be from an individual looking for investment property, hoping that I’d be interested in selling my home.

Over the years my wife and I have received numerous letters from various realtors asking if we’d be interested in putting our home on the market, but this is the first one I can recall that flat-out said he would be buying it himself as an investment. To sweeten the deal the letter said this:

I will take a property in any condition, “as is” and will not make you do any repairs or upgrades. I am willing to pay all closing costs and you will be able to save money because I will pay the Realtor costs as well.

Tempting, if we were truly interested in selling. Given the current value of property in our area, if he gets just one bite I suppose it will have been worth his time and effort. I’m not sure how likely it is that he’ll get a response, but it does go hand-in-hand with an apparent uptick in “flipping” in our part of Redwood City. All around us developers are snatching up older homes, remodeling them, and then reselling them. Not every remodel in our area is a flip, of course: some are simply the homeowners upgrading their home. Increasingly, though, I’m seeing projects where the realtor’s sign is on the construction fencing along with those of the various tradespeople—a clear indication that the house is going to be sold as soon as possible (perhaps even before reconstruction has been completed). As is the case with this house, for instance:

99 Nevada Street used to be an old, slightly tired-looking, 2300 square foot house. Seemingly before it even went on the market a local contractor bought the property and filed plans with the city for an extensive remodel that would turn it into an essentially all-new 2700 square foot house. The house will be sold as soon as it is completed (if isn’t already sold; the realtor sign has been on the construction fencing for nearly the length of the project). Demolition began immediately after the permit was issued in early January and the contractor has been working on it steadily ever since. The project appears to be close: when I took the above photo workers were in the process of readying the driveway, sidewalks, and steps for pouring. After that, the decks need to be built, landscaping needs to be done, and any final inside finish work needs to be completed. Based on their progress so far, I expect this one will be completed within the next couple of weeks.

A couple of months after 99 Nevada got underway, the same developer began work on another nearby project, this time on behalf of the homeowner. Whereas at 99 Nevada they took the building down to the floor, leaving only the foundation and some of the floor joists, the fireplace, and one or two small bits of wall (that, I believe, were later taken down), the bulk of 127 Hudson Street remains: only the front part was removed. This house, too, is remaining relatively small: they’re adding 550 square feet to the front, and building a new two-car garage:

As I was walking in the area the other day getting these pictures, I was somewhat amused to see a Bobcat (a small tractor) making its way down Hopkins Avenue: it drove all the way from the house at 99 Nevada to 127 Hudson. I wonder if the kids at Stafford Park got as much of a kick out of it as I did?

I’m very pleased that neither of these homes are being turned into monster houses. There are enough two-story houses in the neighborhood that a second level could have added to either one. Doing so, however, likely would have meant that they couldn’t have preserved the original foundations, which might have changed these projects from remodels to all-new construction and thus might have changed the economics. Even if that wasn’t the case, I’ve heard that there is strong demand for medium-sized houses like these; not everyone needs or wants a “McMansion.”

If you did want a McMansion, though, there are a pair of them being built on two side-by-side lots on Alameda De Las Pulgas. I’ve been watching those properties at 353 and 355 Alameda De Las Pulgas for some time now; it is very unusual to find undeveloped residential property in Redwood City, and they have been sitting untouched for years.

According to PropertyShark.com these properties are each worth in the neighborhood of $450,000, although each were last assessed at something more like $250,000. Their location right on the busy Alameda De Las Pulgas makes them a bit less than ideal. As well, the fact that the long keystone-shaped lots slope down between 9% and 9.5%—meaning that the back of each lot is somewhere between thirteen and eighteen feet below the level of the street—makes them a bit tricky to develop. Drainage will be an issue, as will the fact that sewage will have to be pumped up to the level of the city sewer lines. But a single Sunnyvale-based developer has taken on the challenge, and is building a fairly large home on each of the two properties.

One of them is much farther along than the other, and although I have not yet determined its specifications, you can see that it is not a small house:

The house at 353 Alameda, which sits to the left of the one in the above picture, has yet to rise above the foundation. But I did determine that this second house is going to be 3800 square feet (not including the garage), with four bedrooms and five bathrooms.

Every morning these days I find myself waking up to the sounds of construction. The sounds of jackhammers, nail guns, and dumpsters being picked up or delivered have replaced the twittering of birds in the oak trees outside our bedroom. As I walk through the Oak Knoll/Edgewood Park neighborhood where my wife and I live, I’m not surprised to see that there is at least one construction project active on pretty much every block. It seems that construction noise may be a new reality for us for some time to come…

Traditional stick construction means that from start to finish a typical project of the type I’m seeing often takes as much as a year to complete: a year of construction noise, dust, and traffic interruptions. While there aren’t many good ways to shortcut the process—building a home simply takes time—you can shorten the amount of time that work is actively taking place on site. In a previous post I mentioned stumbling across the site of Blu Homes’ Silicon Valley Design Center here in Redwood City. Blu Homes (no connection to Blu Harbor) is a Northern California-based builder of premium manufactured homes, and a couple of weeks ago they held a Design Seminar at their Redwood City site for people interested in their product. Being me, I just had to go!

If you, like me, think that “manufactured home” and “mobile home” are synonymous, you’ll need to disabuse yourself of that notion. While these homes are built in a factory, that simply allows Blu to build to a consistent level of high quality, as when you build any other high-tech product. The fact that Blu builds their homes indoors means that weather is no longer a factor. And although the factory is not located within Redwood City, it is located within the Bay Area: in one of the huge buildings at the old Mare Island Naval Shipyard in Vallejo. Never having been to Mare Island, my wife and I took a jaunt out there one day, and tracked down their factory:

Blu Homes’ factory is a real example of turning swords into plowshares. Once the US Navy’s premier west-coast submarine port (and, during WWII, the controlling force for shipbuilding in the Bay Area), the Mare Island Naval Shipyard closed in 1996. Nowadays it is home to a number of government agencies (including the US Forest Service and the Fish and Wildlife Service), Touro University California, the California Conservation Corps, and a number of commercial and industrial companies (including Blu Homes). A large part of the former base housing has also been converted to civilian housing. 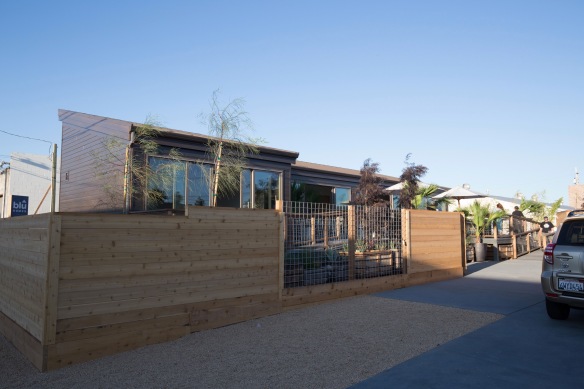 Back in May, when I first stumbled across what would become their Silicon Valley Design Center (pictured above, at 888 Douglas Avenue near the intersection of Douglas and Bay Road), I immediately looked up the company on the Internet. I was intrigued by what I saw: their high-quality homes are very attractive, and also very innovative. Having gone through numerous remodeling projects and one from-the-ground-up home construction project, I was also excited by the way that the home literally unfolds on site and then is finished over a couple of short weeks. This should greatly minimize the disruption to the surrounding neighborhood when compared to conventional “stick” construction.

With all of the talk about affordable housing in the news lately, my wife and I have been discussing the feasibility of building an “in-law unit” in our backyard that we could then rent out at an affordable rate. In looking through Blu Homes’ catalog, I was immediately drawn to their Origin Pod design. This is a 633 square-foot unit (30’ x 21’) that comes as either a one bedroom or a studio, with an optional kitchenette. It seemed that it might be perfect for our needs, so we attended the Design Seminar with that project in mind. Unfortunately, it turns out that while the unit itself would indeed be ideal, getting it into our back yard would be tricky: our side yards are too narrow, and they aren’t willing to crane it over our house (not that I’d necessarily want them to). So if we do decide to go ahead with an in-law unit, it’ll have to be of more conventional construction. But the seminar was fascinating, and we enjoyed touring the modules that Blu Homes has put onto their Redwood City site.

Although there are few places to build a home in the immediate area, Blu Homes works all across the country, so this could be a great solution for anyone wanting to build a vacation home, for instance. And if you are considering tearing down an existing house in order to build a new one (as, I’ve heard, a neighbor may be doing), Blu Homes might be worth looking into. They say that build plenty of homes on “infill” lots—lots that have other buildings immediately adjacent to them. Given the strong attendance at the seminar we attended, plus the high-tech features of both their process and the homes themselves, I suspect that they’ll do well here in Silicon Valley. Do check them out at https://www.bluhomes.com.

The Redwood City housing market is white-hot right now, as is clearly evident from all of the “for sale” signs and construction projects going on in our community. I can certainly understand the temptation to “cash in” right now: prices might never be higher. But, of course, selling means that we’d have to find somewhere else to live. And there just aren’t many places better than Redwood City. We’ll be staying put. But maybe, just maybe, we’ll build that in-law unit…

3 thoughts on “Under Construction”