There seems to be something special about the number 601 here in Redwood City. Given its height, its hard to miss the 196-unit, 8-story “Marston” apartment complex being erected at 601 Main Street. Not too far away, on the other side of the San Mateo County Court complex, one can’t help but notice the sheer amount of wood being used to construct the 133-unit, 5-story Fuller Street Apartment complex under construction at 601 Brewster Avenue (this project has had several addresses; 601 Brewster Avenue seems to be the latest). And because things always seem to come in threes, at its June 30 meeting the Redwood City Planning Commission approved a new office project to be built at 601 Marshall Street.

The building proposed for 601 Marshall is an interesting one, one that will certainly affect Redwood City’s downtown skyline. Whether that is good or bad depends upon your point of view, as was clear from the public comments made during the meeting. That 4+ hour meeting, which you can watch in its entirety here, was divided into three main sections: a presentation by staff and by the building’s developer, followed by public comment, followed by a discussion by the Commission members of the major issues surrounding approval.

Having followed this project since its original proposal (see my post Time for Some Commercials for a survey of all of the proposed downtown projects, including 601 Marshall), I was familiar with the project’s basic goals and design. For those of you who are not up on it, here is the current proposal:

Here is the site as it stands today:

The project will consume this small building, plus the tiny gray-and-white building to its immediate left, plus the parking lot that extends beyond the picture to the right.

Here is the architect’s rendering of the proposed building, as viewed from roughly the same spot:

For reference, that triangular green patch in the lower right side of the rendering is where the Bank of America stands. Also, the tall white-and-gray building against the left edge of the rendering is the 10-story Indigo apartments, which are currently under construction.

Once the project had been presented to the Commission and the meeting attendees, the meeting was opened up for public comments. About 35 people spoke, and given the number of speakers they were held to a strict 3-minute time limit. Those speakers were evenly split in their opinions: just about half of them were in favor of the project, while the other half were opposed. Although reasons for opposition varied, there were three main objections:

In its original incarnation, the building was going to be 136 feet, or 11 stories high (the Downtown Precise Plan allows buildings up to 136 feet on this site). Based on early feedback, however, the developer lopped two stories off of the building, dropping it to its current 112 feet. Some commenters still felt that the building is too high, however, and that it will loom over our downtown.

While technically the building is no higher than the Historic Courthouse, and thus won’t actually loom over that structure, it most certainly will dominate the smaller buildings that will remain on the block—two of which are historic resources (as is the Historic Courthouse). Take a close look at the rendering, above. See that little white outline of a house just to the left of 601 Marshall? That is one of the historic resources that was discussed in the meeting. It is located at 611 Middlefield, and although it no longer appears to be a residence—apparently a law firm now occupies it—the structure itself, which was built in the year 1891, is nevertheless historic. And cute, too: 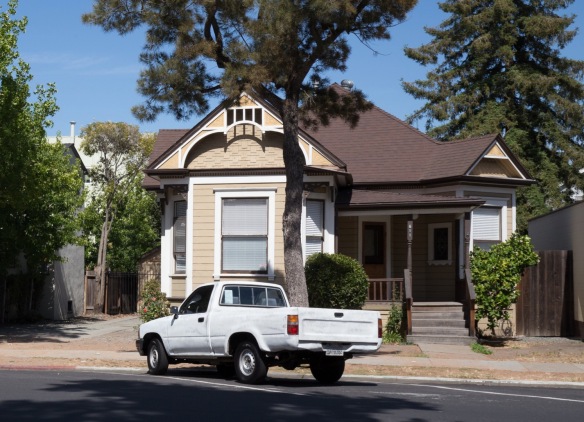 This little Queen Anne-style house will not be touched, but 601 Marshall will rise up extremely close to it: pretty much where the wall is at the right side of the above picture.

The other historic house that will sit in the shadow of 601 Marshall fronts onto Jefferson Avenue: 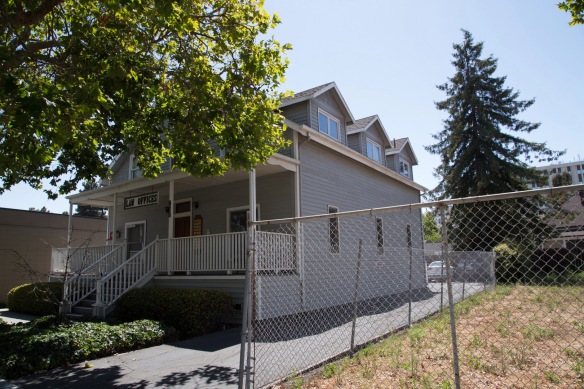 As you can see, this one-time house, which was built in 1890 as housing for employees of the Hanson Lumber Company, is now a law office. Unlike the other historic house, this one won’t be directly up against 601 Marshall; a small one-story office building that currently sits between it and 601 Marshall will remain. Incidentally, note the fenced-off dirt lot at the right side of the above picture: that is where the new 20-unit Habitat for Humanity project is slated to rise up. And considering the size of the lot, it too may rise high (we have yet to see a design for that particular project, however).

Given 601 Marshall’s proximity to these two historic resources as well as to the Historic Courthouse, Redwood City’s Historic Resources Advisory Committee (HRAC) needed to weigh in. After discussing the project in three public meetings, the HRAC concluded that while the building would of course have some impact on these structures, “the impact does not rise to the threshold that would cause a substantial adverse change in the significance of the adjacent historic resources, and the adjacent historic resources will remain eligible for listing in the California Register of Historic Places.”

At the meeting a great deal of public comment was devoted to parking. Why? Well, for a building like this the number of required spaces is determined by the building’s square footage. For 601 Marshall as it is currently proposed, there should be 388 parking spaces. The design, however, only includes 270—a shortfall of 118 spaces. But not only does the city have a mechanism to deal with problems like these, it seems to actively encourage its use: a “parking in-lieu fee” that the developer pays the city for each missing parking space. The fee is currently set at $10,000 per space, but the city and the developer appear to have agreed upon a price of $25,000 per space, or just shy of $3 million for the needed 118 spaces. That money is then supposed to be used by the city to create additional parking elsewhere in the city. Additional parking, the developer is quick to point out, that will be completely open to the public. Whereas any parking in the building will be exclusively for tenants and their clients, at least during the day. (As is the case with Crossing/900, during evenings and weekends some or all of this building’s parking spaces will be made available to the public.)

The Planning Commission’s discussion of this particular topic was fascinating: not only were a majority of the commissioners in favor of the parking in-lieu fee solution, some actually saw it as a public benefit. By limiting the amount of parking that is available in the building, they see it as yet another way to discourage the building’s tenants from driving. The building’s proximity to Caltrain, plus all of the downtown housing that is being built, plus the building’s secure storage area for 78 bikes and adjacent shower facility, will act as a carrot to encourage alternative modes of transport. But there is also a stick: this building will have an associated TDM (Traffic Demand Management) plan that will require a certain percentage of the building’s occupants to eschew driving to work. Regular surveys and electronic monitoring will be used to determine compliance, and fines and other such mechanisms should help to ensure that the plan’s goals are met.

After public comment and after a lengthy discussion by the Commission members, the commissioners voted 5-1 to grant the project a Downtown Planned Community Permit, which basically means that they approved the project (Commissioner Borgens voted against it, citing concerns about parking, while Commissioner Schmidt recused himself at the beginning of the meeting due to a possible conflict of interest). Two guideline deviations were approved (one regarding the recommended number of square feet per floor, and the other regarding the size of side and rear setbacks), as were the “Vesting Tentative Map” (the basic plan, essentially) and the Parking In-lieu Fee Application. Together these give the developer the go-ahead needed in order to finalize the building plans and obtain the necessary grading and building permits.

Is it a good project? Or a bad one? It’s hard to say at this point. From the renderings that were shown in the meeting, it doesn’t appear that 601 Marshall will have a significant impact on the view for people standing in Courthouse Square or in front of the Fox Theatre. The addition of between 390 and 590 new downtown jobs (depending upon who leases space in the building) should be a plus, although the 270 additional cars making their way to this building will be a definite minus. However it turns out, though, it seems that we’ll soon have a new “601” to add to our collection.

A little less than a month ago I wrote about how my wife and I became certified to get free recycled water from the city of Redwood City for use in our garden. Due to a couple of out-of-town trips, and the need to order the “bladder” that I wanted to use to transport the water, it wasn’t until this week that we were finally able to transport our first load. But I’m delighted to report that everything worked as I had hoped, and that the 150 gallon “AquaTank II” water bag that I purchased online from BayTec Containers worked perfectly. Here is a picture of it in the back of our Ford Ranger pickup: 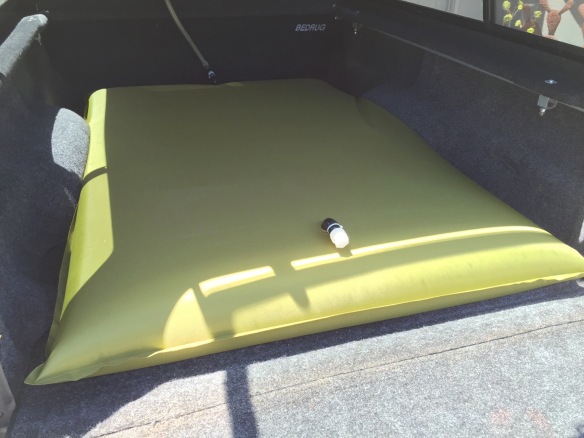 We estimated that we wound up with about 100 gallons of recycled water in this one load, which means that we just saved 100 gallons of fresh water. We plan to make a couple of pick-ups a week, which will ultimately allow us to cut back even more on our fresh water use.