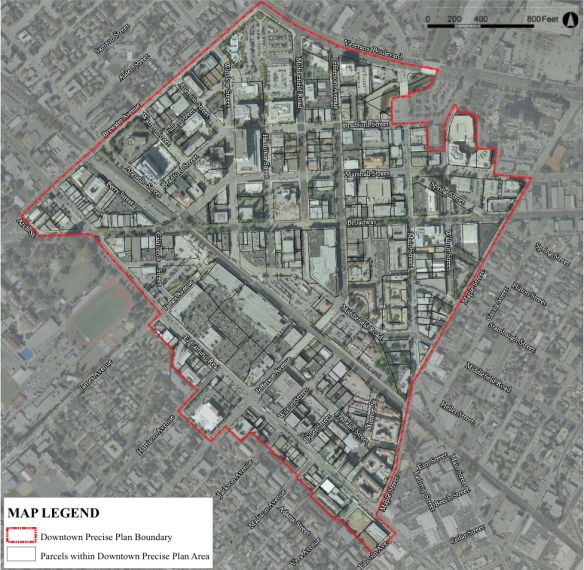 As you can see, the northeast side of El Camino Real from Maple to Brewster, while maybe not within the downtown itself, really does fall within the DTPP boundary, as do businesses on the southwest side between Lincoln and James. Thus, the Whole Foods building is governed by the plan while Sequoia High School is not.

For this week’s blog post I want to focus on the bit near the bottom: the area bounded by Jefferson Avenue, El Camino Real, Maple Street, and the train tracks. To better illustrate just where I’m talking about, I started with a map from Redwood City’s website and added some text to help you get oriented:

Within this relatively small area there are four large residential projects in various stages of development (shown in yellow-orange and tagged with a number within a red circle on the map), plus the existing Franklin Street Apartment complex. Franklin Street Apartments consists of 225 units. If all four of the new projects are approved and built as planned, Redwood City will gain an additional 708 units, for a grand total of 933 apartments within this roughly eight-square-block area.

Although the majority of what you’ll find in the area will be apartment buildings (assuming that they are all built as planned), at least for now some businesses will remain. In particular, the Papa John’s pizza place and the AT&T Wireless building behind it will remain at the corner of Jefferson and El Camino. As well, along El Camino Real the La Mancha Plaza (which mostly is just a treadmill shop, it seems) and the Sequoia Veterinary Hospital (marked “Misc. retail” on the map) will stay, along with Chain Reaction Bicycles and Security Public Storage (which lies behind Chain Reaction).

Also staying—much to my fascination—are the occupants of the properties on Franklin Street surrounded on three sides by the large C-shaped apartment complex (marked “11” on the map). In this space is a small (14 unit) apartment building, a two-story house, and a small commercial building housing a laundry equipment manufacturer. These guys must feel like someone is peeking over their shoulders these days, what with the looming apartment complex behind and on either side of them:

I’d love to hear the story of why these buildings are still standing. Did the developer not offer them enough to relocate?

Enough of that, though. Before I get into the four projects that are either underway or are planned for the area, let me start with some background on the large existing complex, Franklin Street Apartments.

In the above map, the two purple blotches identify the location of the existing Franklin Street Apartments. This large 225-unit apartment complex, which is bisected by Franklin Street, is most recognizable by the face it presents on El Camino Real: 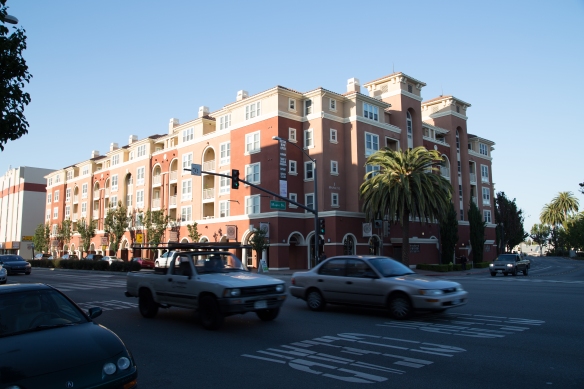 Completed in the summer of 2002, this complex was built by and is currently managed by Irvine Co. Apartment Communities. The complex’s close proximity to Caltrain, Sequoia Station, and Whole Foods, not to mention Redwood City’s downtown, make it ideal for someone who wants to minimize their driving. On-site retail shops include Sprint, Togos, Baskin-Robbins, Green Clean Drycleaners, and Kumon, along with the Franklin Street Apartments leasing office.

The complex consists of both one- and two-bedroom luxury apartments (some two-story townhouse-style), many with in-unit washers and dryers plus gas fireplaces. As well, some units have private patios or balconies. Shared amenities include underground parking with a charging station for electric vehicles; a pool with spa and sundeck; a “clubroom” with a gourmet kitchen; a fitness center; and a business center with computers, printers, copiers, and a conference room. The complex is pet friendly: you can have up to two pets (cats or small dogs) in your apartment, albeit for an additional monthly fee.

Luxury doesn’t come cheap, however. At Franklin Street Apartments you can expect to pay around $3,000 per month for a 773-square-foot, one-bedroom apartment. Two-bedroom apartments start at around $3,500, and can go as high as $4,650 for a two-level townhouse-style unit.

Reviews on Yelp seem to be uneven: overall the 38 reviews give the complex 2½ out of 5 stars. While some of the reviewers just love the place, some seem to have had poor experiences that caused them to rate it very low. It does appear that many of the really bad reviews are a couple of years old, however, so perhaps there have been recent changes that have improved life for the residents of Franklin Street Apartments.

For over ten years now Franklin Street Apartments has been one of the only games in town in this part of Redwood City. The first of their new neighbors, however, is moving along rapidly and should be accepting tenants sometime this summer.

The large C-shaped complex currently under construction at 299 Franklin St. (number 11 on the map) was formerly named “Elan Redwood City” but is apparently being re-christened with a trendier name: “Franklin 299”. At six stories, the complex looms over the three small buildings it surrounds on Franklin. The 305 apartment units will have a variety of views: some will look into or over those three buildings, while others will have a view across the tracks towards our main library. 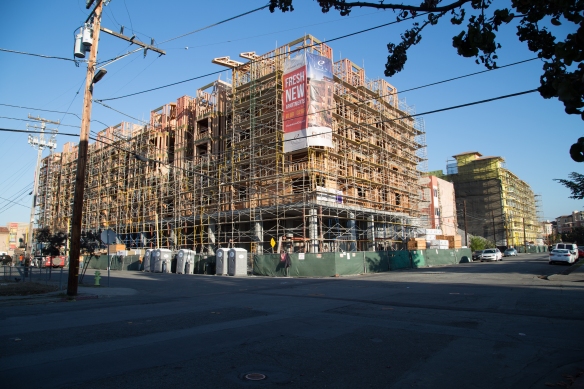 Below is a rendering of what the building will look like when it is completed (this rendering is of the corner where Monroe meets Franklin; the above photo is of the other end of the complex, where Wilson intersects with Franklin): 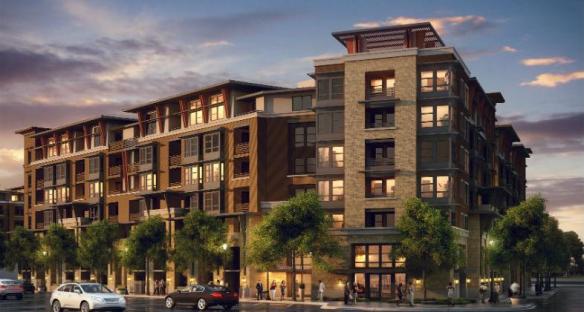 Franklin 299 is being built by Greystar Development, a huge firm that is headquartered in Charleston, South Carolina (but has offices throughout the country). While they may not be a familiar name in our area, this isn’t just a one-shot deal for Greystar: Franklin 299 is just the first of the apartment complexes being constructed by Greystar Development in this part of Redwood City.

Number 6 on the map is Greystar’s second project. Currently referred to as 103 Wilson, this 175-unit apartment building has gotten the go-ahead from the city and is now under building review. Greystar managed to stitch together seven different properties for this project: 103 Wilson will occupy the entire block between Franklin and the train tracks in one direction, and from Jefferson to Wilson in the other. 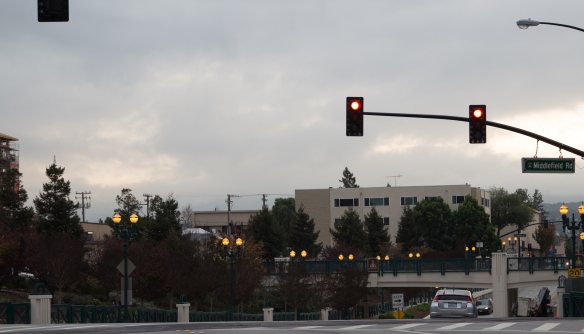 In addition to the blocky apartment building visible in the above picture, the site currently contains the infamous $1 house (a small blue victorian that may or may not be available for sale for $1, as long as you relocate it); a small light industrial building where Wilson meets the Caltrain tracks; and a small empty lot formerly owned by the city (in the above picture, the trees in front of the apartment building are located on this empty lot). Greystar has acquired all of these properties and all of the tenants have moved out, so demolition should begin sometime late this year. After that, construction will commence, resulting in an apartment building that should look something like the following rendering, taken from Redwood City’s website:

Greystar clearly knows a good thing when they see it, and right now apartment buildings in Redwood City fit the bill. Franklin 299 will be done soon, and 103 Wilson will get underway shortly. Not content with that, Greystar has acquired yet another nearby location. Assuming that they gain the requisite approvals, they will follow 103 Wilson with a 137-unit apartment building on El Camino Real (marked with the number 10 on the map). Where on El Camino, you ask? Here:

Yes, this third apartment complex will be located where Redwood Trading Post stands today. There is no word on what will happen to Redwood Trading Post, whether they’ll relocate or close. Although Greystar has acquired the necessary properties, given that this project is still in the proposal stage it is probably too early to say what the fate of Redwood Trading Post will be. The project should go to Redwood City’s planning department in the May/June timeframe, so we’ll hopefully know more by this summer.

Here is the official rendering for this particular project:

If the three Greystar Development projects aren’t enough, W. L. Butler Construction, Inc. is proposing that they replace their own offices at 204 Franklin with (can you guess?) an apartment building. Here is their existing building, located at the intersection of Diller and Franklin:

Buler is proposing that they erect a 91-unit apartment building on this site (number 7 on the map). Like 1035 El Camino, this building would have six stories of apartments on top of two levels of parking. It isn’t stated, but from the rendering it appears that one of the parking levels would be underground, resulting in what would appear from the outside to be a seven-story building rising some 80-90 feet into the air:

The apartments would replace Butler’s current offices and their front and rear parking lots, but would not extend any further: the small body shop on Diller and the existing businesses along this block of El Camino Real would be unaffected by this project.

So. 225 units in Franklin Street Apartments, 305 in Franklin 299, 175 in 103 Wilson, 137 in 1305 El Camino Real, and 91 in 204 Franklin add up to a grand total of 933 apartments within this roughly four block by two block area (OK, 947 when you add in the 14 apartments in the small building at 119 Franklin). And all are apartments: not a condo in sight, which is consistent with development going on elsewhere downtown. Why apartments, and not condos? Well, Chet Lane, a realtor (and a former neighbor of mine) provided the answer in his March 11 newsletter. In referring to all of the new development, he wrote the following:

“My biggest concern is that only 18 of 1,635 living units are available to potential homeowners and 1,617 will be rentals, not as good for the community as having more owner-occupied residences. I asked the Mayor, Jeff Gee, about this imbalance and he said that the developers are reluctant to build more condos for sale due to the likelihood of lawsuits from homeowners’ associations against the builders, dramatically reducing the profitability. There is a good possibility that when the lawsuit statute of limitations expires in 10 years, the apartments may then be converted to condos for sale.”

Fascinating stuff. And sad, if true. Although developers should indeed be held to account if they knowingly build flawed developments, they should be able to build a quality condominium with little fear of legal retribution.

In any case, this eight-square-block area is seemingly poised to become the rental-housing epicenter of Redwood City. Although it may not exactly lie within our downtown, it is close enough that downtown merchants should be positively impacted by the influx of so many new residents. And its close proximity to Caltrain and to the kind of shopping many of us do on a frequent basis will hopefully mean that traffic impacts from so many new residents won’t be nearly as bad as if the apartments were located elsewhere within Redwood City. Given the speed with which these apartments are coming online, we won’t have long to wait to see just how our new neighbors will affect life here in Redwood City.

23 thoughts on “Around Franklin”