My family didn’t move much when I was growing up. Technically, we moved twice before I headed off to college. However, the first time we moved I was barely two years old, so that move didn’t really have a meaningful impact on me. The second time, though, I was nine; I most definitely felt that move. Fortunately, our new house was only a mile or so from the old, so although my next-door friends were suddenly a mile from me, by then the majority of my friends were people I knew from school or from church. Thus, that move didn’t really change my life all that much. I used to wonder what it would be like to make a really big move—perhaps across the country—but after having moved a couple of times since graduating from college (including to Texas and back), I’m all for staying put. However, sometimes you have no choice. For instance, that move when I was nine was to a larger house, which our family of seven badly needed.

I’ve endured several corporate moves as well. Companies and businesses move for all kinds of reasons: they need more space, they have too much space, they lost their lease, etc. Recently there have been a couple of Redwood City businesses that are “on the move,” so to speak. In last week’s post (“We’re in Business”), I mentioned that the law firm of Bunsow De Mory Smith & Allison LLP is moving (or, just maybe, expanding) from Allerton St. into the newly remodeled building at the corner of Brewster and El Camino. Piggybacking onto that, I thought I should touch upon a couple of other Redwood City businesses that have recently moved or are going to be moving soon.

In my March 20 post titled “Around Franklin” I reported that a 137-unit apartment building had been approved for the site currently occupied by Redwood Trading Post. At that time I did not know whether Redwood Trading Post would be moving or closing. On Monday Bill Silverfarb of The Daily Journal confirmed one piece of the puzzle: he reports that they will be moving to a new location within Redwood City. Although the Weber brothers, who own the business, are not yet ready to announce where Redwood Trading Post will make its new home, I for one am greatly relieved to hear that they will continue in business within our fair city. They are one of the great independents: faced with competition from REI (in San Carlos) and Any Mountain (on Whipple, at the train tracks), the 41-year-old business apparently continues to do well. Wherever they move, I know that I, for one, will continue shopping there.

Earlier in March I noted that the Redwood City Art Center, on Broadway between El Camino and the train tracks, had an “Office Space Available” sign on the building; the Art Center had lost their lease. Fortunately, they too were moving, and not closing. Unfortunately, they moved outside of Redwood City’s borders. But at least they didn’t go far: they’re now at 1700 Industrial Road in San Carlos, not terribly far up from Whipple Avenue. I took a walk the other day in which I managed to get pictures of both their old location—which is not only empty but has been completely stripped to the studs—and their new location on Industrial. Here is what is left of their old home:

And here is where you can find them today:

They share their new building with a couple of businesses; enter the glass door near the center of the picture and head up the stairs. The Art Center of Redwood City and San Carlos (their new, official name) has some 33 studios on the second floor of this building. These studios are used by both established artists and by art students of all ages attending some of their many classes.

Third on my list of businesses on the move is Lyngso Garden Materials, Inc. They aren’t moving quite yet—signs on their door indicate that they’ll be moving in “the second half of 2015” and one of their employees mentioned “winter” of 2015—but they’ll be a loss to Redwood City as this is yet another business that is relocating to San Carlos. Fortunately, they, too, aren’t going far—just north of the San Carlos airport, on the bay side of 101. Thus, those of us who buy soil, rock, and such from them won’t have too far to drive. I was told that they would be moving to a site on Shoreway Road next to Recology, so naturally I had to check it out for myself. It was a bit of a walk (I ended up walking a full 11 miles that day), but I made it. Here is where I believe that we will find them later this year:

The above picture is of 345 Shoreway Road, which lies between a mini storage and the Shoreway Environmental Center (aka, the transfer station). It once housed Hatcher Press, a printing firm that closed in 2009. Since then I believe that the building has been empty. Just to be sure, I checked the ownership records for both this address and Lyngso’s current address, and what I found was a bit of a surprise. I had expected that this San Carlos site would be now owned by the Lyngso family, and that Lyngso’s current location would be owned by Jay Paul Co., the current owner of the Malibu Grand Prix site (where it hopes to construct the giant Harbor View Place office complex). In fact, that is exactly backwards—at least for now. The Lyngso site is still shown as owned by the Lyngso family, while the Shoreway Road site—which, as you can see in the above picture, is currently undergoing renovations—is owned by Jay Paul Co. My guess is that Jay Paul Co. is prepping the site to Lyngso’s specifications, and once it is ready they will simply do a land swap with the Lyngso family. This will not only give Lyngso a nice, new home, but will give Jay Paul Co. control over all of the land between Seaport Blvd and the under-construction Maple Street Correctional Center, and between 101 and Blomquist Street. (One possible exception: it doesn’t appear that Jay Paul Co. owns the small gas station on Blomquist, but I’m assuming that they will by the time Harbor View Place gets underway.)

Lyngso’s new home will be easy to get to, since it is right on the way to the transfer station: simply take 101 to Redwood Shores Parkway, then make the first left onto Shoreway Road. Wind your way past the Public Storage, and turn in between the large single-story concrete building and the green-and-brown Recology building. Thanks to Recology there are already a number of large trucks taking that route, so the trucks going to and from Lyngso will fit right in.

Moving is always painful, and I’m sure that businesses find it especially so: they not only have to deal with the move itself, but also have to ensure that their customers will continue to patronize them at their new location. Fortunately, in the cases of Lyngso, The Art Center, and Redwood Trading Post, the new locations aren’t all that far from the old and thus keeping their hard-won customers shouldn’t be all that difficult. While we customers will have to adjust to the new location, that is far easier to deal with than when a company simply goes out of business. Finding a new vendor who is as good as the old, familiar one is a much more difficult task. Given that my wife and I patronize two of these three businesses, I’m glad that I have the opportunity to follow these successful enterprises that are on the move.

I last visited Jardin de Ninos park, at the corner of Chestnut and Middlefield, back in mid-March. At the time the little 1/3 acre park was well in the throes of reconstruction. But it seems that the city indeed hit their goal of reopening in May: tomorrow (May 16) at 11:00am the city will hold the grand re-opening of this cute little neighborhood park. To my regret I won’t be able to attend, but if you can, it sounds like fun:

At the Grand Re-Opening we will have lots of space for play, artists on hand to work with attendees on painting a butterfly hand tile for the park and a Taco Truck! Come on down!

I was fortunate to have again walked by the park a little over two weeks ago, just as the renovations were close to wrapping up. I stood for a while watching two city workers attaching metal butterflies to the park’s very attractive entry arch:

As I stood there, a woman who was supervising the work—her name was Courtney, I believe—approached me and struck up a conversation. I thought perhaps she was the artist, but no, she had done the park redesign and was overseeing the renovations. She offered to show me around, and I gladly took her up on her offer.

This park is a great example of the city at its finest: rather than simply upgrade the play structure, the Parks department reached out to the surrounding community and asked them what they wanted. All of the feedback they received was then taken into account during the redesign. The result? A delightful little park that not only has some rather enticing play structures, but also has areas where older kids and adults can sit, plus a variety of trees bearing edible fruit, such as avocado and citrus. And the star of this park is a rather avant-garde combination bench/fountain in the back corner:

I can’t wait to see it in action! Apparently, not only does water bubble up from the green flower-like object in the center, but it also squirts out of the mouths of some of the birds (click the above photo for a larger view). Courtney introduced me to the two artists who not only designed this thing but also made and installed all of the beautiful ceramic tiles: they were working on the bottom of the fountain as I watched.

Although the park is small, the city was fortunate in being able to purchase a small, run-down house immediately behind the fountain. This house, which fronts on Middlefield Road and stretches from the park to Cedar, is largely hidden by trees (the park is behind the green construction fencing in the following picture): 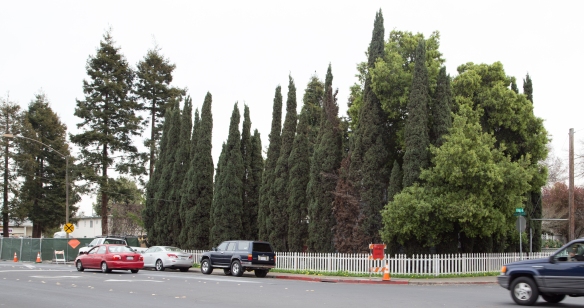 Now that the former residents of the house have relocated—with some help from the city—the ramshackle old house will be torn down and the space will soon become an extension of the park. Courtney told me that this will be a quiet space for older folks who want to enjoy the park separate from the playing children.

Jardin de Ninos seems like an ideal neighborhood park. Although I’ll be missing the grand reopening, I’ll certainly be paying the park a visit in the near future. I look forward to seeing it in action, with kids playing, parents watching, and perhaps an ice-cream vendor stopped nearby. And I’ll be thinking back to my own childhood, and wishing I had had such a park near to our home back then.