I was watching Check, Please! Bay Area the other night and learned that—at least according to the show—San Francisco has more restaurants per capita than any other city in the U.S. These days, however, it seems as if Redwood City might be giving San Francisco a run for its money. Even though we already have a fair number of restaurants, there are several more coming soon. Deciding to check out the ones downtown, I put on my walking shoes and threw on a sweatshirt—that day was both overcast and cool—and headed towards town with my trusty camera bag over my shoulder. I was on the hunt: on the hunt for empty (or, in some cases, not so empty) storefronts with liquor license applications posted in their windows. 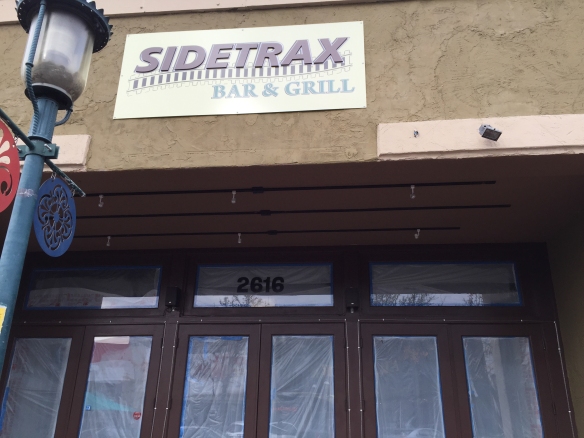 On my walk the first place that I came to sits next door to City Pub, on Broadway. Sidetrax—the most recent tenant—quietly closed its doors a few months back. This location has been a number of different restaurants over the years. For some reason, restauranteurs just can’t seem to find a winning formula here. But it can’t be the location, given that City Pub has done so very well for so long now. Me, I kind of liked some of the previous tenants. In particular, when it was a Mexican restaurant I enjoyed having guacamole and chips with a Margarita while sitting at a sidewalk table on a sunny afternoon. But whatever the reason for this latest closure, on the day I went by there was a liquor license posted on the door.

From the license and from the Internet I was able to learn that the new restaurant will be called “Kemuri” and that the owner is one Takeo Moriyama. A bit more digging told me that there is a musician with this name, but I’m pretty sure that he isn’t our guy. Thus, I kept looking and found a hit for one Takeo Moriyama cooking at Sumiya, a well-liked (according to Yelp) Japanese restaurant in Santa Clara. I think it is safe to presume that this is our restaurant’s new owner, and that he is starting his own Japanese restaurant here in Redwood City. Assuming that his restaurant is similar to Sumiya, it will be a Yakitori restaurant (Yakitori are Japanese-style skewers grilled on charcoal braziers). That sounds good to me…

On my way to the next spot I passed by the future Kristi Marie’s (on Broadway, near where it crosses the railroad tracks). I’ve already written about this place (in All In The Family), but since I wrote that post the interior has been cleaned up and now looks pretty close to finished:

I noticed a pile of mail on the floor (just inside the glass door) that was addressed to Kristi Marie’s, so things seem to be on track for the anticipated opening in April (although why they have to wait even that long, I’m not sure).

This is not a new restaurant site, at least not yet.

On Theatre Way, the former location of The Melt sits empty after closing late last year. All signage has been removed from the store. There is no indication of any activity: no “for lease” signs or any indications of work going on inside. Presumably The Melt has to find someone to sublet the space, and this may take a while. But given the location (right in the middle of the block, and pretty close to the Century Theaters entrance), I expect that they’ll find someone soon.

I do wonder why they closed, though. Personally, I thought they had a good product, and I would think that the foot traffic outside their door would have been sufficient. Perhaps they just couldn’t lure enough people inside? Or maybe it had something to do with the fact that The Melt has recently had to change their formula, from just grilled cheese sandwiches and soups to those, plus burgers and chicken sandwiches. Perhaps the configuration of our particular store couldn’t be easily revamped to handle the new menu items.

Furthering my theory that The Melt site will be re-leased soon, elsewhere on Theatre Way there are signs of new life. Down towards the end near Crossing/900, between Portobello Grill and Arya, there is a small storefront that has a posted liquor license:

I did some investigating and it looks like there may be a connection between the coming restaurant, which will be named “Timber & Salt”, and Putney Farm in Woodside (The company behind the restaurant is is “Whiskey Hill Restaurant Group”, and the address for the company matches Putney Farm’s). Putney Farm has a fascinating website that may hint at what we’ll be seeing in this space. Their liquor license includes distilled spirits as well as beer and wine, which would be consistent with the website. As well, they’ve applied for a Caterer Permit, which will allow them to serve food drink at locations other than just this space. I should note that it’s possible that the Caterer Permit is simply to allow them to serve alcohol on the sidewalk (most of the restaurants on Theater Way have sidewalk seating, including Portobello Grill which is just visible on the left side of the above photo). I’m not fully up on the ins-and-outs of the ABC permits, and so can’t say for sure. But whatever is going on, I’m excited to see how this one turns out! I’m not a big mixed-drinks person, but their website certainly shows some interesting-looking ones…

Hoping that it might be open at last, I wandered down to our new Philz Coffee (on Broadway, across from the Century Theater building). It isn’t, but there is a sign proclaiming that their grand opening will be on March 11. So mark your calendars, all you coffee lovers! I continue to read and hear good things about Philz. I was particularly interested to see in a recent TechCrunch article that Philz has raised an additional $15 million to expand beyond the Bay Area. It seems that venture capital is not just for high-tech companies! But I’ll remained focused on our store. Here is a recent shot of the interior:

Like Philz, Howie’s Artisan Pizza on Jefferson continues to move along. The interior is shaping up nicely, and the outside patio is pretty much done. I stood for a while watching the gardener planting plants, and imagined what it will be like to sit there on a warm summer’s day. My wife and I are always looking for new places to dine where we can also enjoy our excellent California weather, and this one is going to fill that bill nicely! Howie’s has thoughtfully put a lot of benches on and around their patio; I expect that they will be particularly attractive at lunch hour for folks working downtown.

After admiring the gardener’s fine work, I took a peek into the open front door. Things are moving quickly now. Note the pizza oven behind the back counter:

Two doors down from Aly’s On Main—my current favorite among Redwood City’s downtown restaurants—there was, up until recently, a “DermaBella Skin and Body Care” day spa. They have moved (into the Sola Salons complex, on the Broadway side of the Century Theater building), and here I found another tantalizing liquor license in the window. 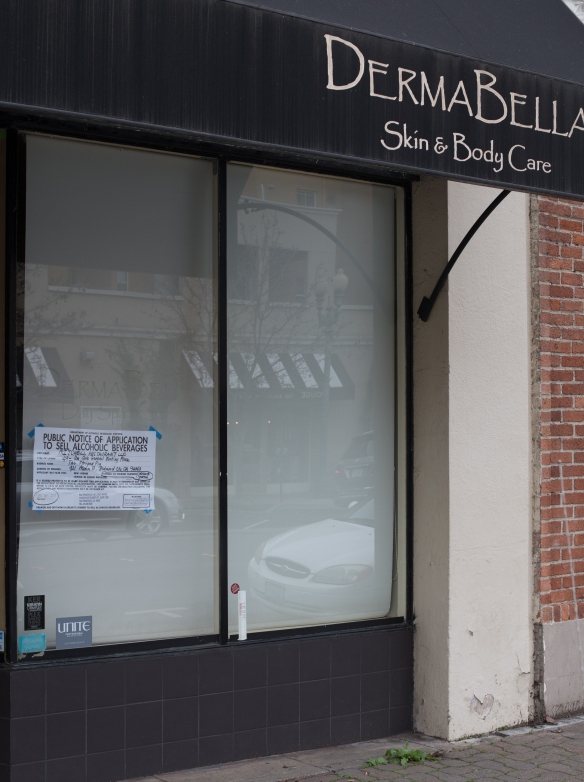 From the license I learned that the restaurant will be named “The Striped Pig” and that it will serve distilled spirits as well as beer and wine: it will have a full bar. Although I did manage to trace the principals in this new endeavor, neither appear to have previous restaurant experience. I was unable to find out anything else about this place no matter how hard I searched, so we’ll just have to wait and see on this one.

Next up is “The Blacksmith”. This one is on Broadway between Downtown and L V Mar, in the site formerly occupied by The Living Room:

Although I could find out almost nothing about The Blacksmith, they’ll be opening in March, which leads me to suspect that any changes that they make will mostly be cosmetic (the windows are papered over, so I can’t keep an eye on any progress that is being made). I only went to The Living Room once, but I was taken by the way that it was decorated like, well, a living room. I’m not sure that a place called “The Blacksmith” will be decorated with comfy soft furniture as The Living Room was, however: the new name conjures up images of dark metal and old wood.

A posted liquor license doesn’t always mean that a new restaurant is coming, of course. Sometimes it just means that an existing restaurant is making a change in how they do business. I came across three such postings on my hunt:

Finally, although not strictly a restaurant, we have a new meal delivery service in town that I wanted to bring to your attention. Farm Hill (https://www.farmhill.com) is operating out of the old La Azteca restaurant location (on Main, near El Camino and Woodside) but you wouldn’t know it since there is no signage as yet and the window blinds are generally kept closed. It doesn’t really matter, though, since they only deliver. My wife and I have had two separate lunches from them so far, and the food we received has been great! They seem to use quality ingredients and eco-friendly packaging to create on-demand (not pre-packaged) meals that are delivered to your home or office for a very reasonable price. Simply place your order by 10:30am and specify the time and place to where you want your lunch delivered, and that’s that!

While I don’t actually believe that we will have as high a restaurant/resident ratio as San Francisco, given all of the new restaurants that Redwood City has gotten or is getting there are fewer and fewer reasons to go anywhere else when you want to eat out. Our choices are tremendous, and each new restaurant seems to be trying to top the others in terms of quality. I enjoy eating out (as if you couldn’t guess), and I must say, I’m looking forward to giving each and every one of these new places a try.

The City of Redwood City just announced that the parking lot at the corner of Winslow and Hamilton—the one behind Pizza and Pipes—will re-open on Saturday, February 28. This lot has been used by the developers of Crossing/900 for various purposes, but construction has apparently reached the point where the lot is no longer needed. Thus, as of the 28th the lot’s 45 spaces will once again be available for public use. While this doesn’t make up for the loss of the Middlefield lot (where Crossing/900 now stands), it is a start. (Note that eventually hundreds of parking spaces in Crossing/900’s garage will be open to the public on evenings and weekends.)