In my post Docktown Marina and the Chamber of No Secrets I mentioned that Redwood City’s Public Works Director introduced his proposed Capital Improvement Program (CIP) budget at that week’s City Council meeting. While just a proposal (the final budget will be presented and voted on by the City Council in June) it nevertheless gave us some idea of where the city plans to spend its capital improvement dollars. In that post I highlighted a couple of the larger budget items, but I neglected to mention one that interested me: “Middlefield Road Utility Undergrounding and Streetscaping.” It is one of the larger items in the budget: out of a total of more than $29 million, this project alone will cost some $3.72 million.

Just what does the Middlefield Road project involve? Basically, it consists of moving overhead utility lines underground and improving things for both pedestrians and cyclists along Middlefield Road between Main Street and MacArthur Avenue (which is one block beyond Douglas Avenue). Why stop at MacArthur? Because as you drive down Middlefield Road that is essentially where Redwood City ends, and where North Fair Oaks begins. I should note however, that the city boundaries are a bit crazy in this neck of the woods. For instance, from just below the Costco to just before Douglas Avenue, only the northeast side of Middlefield Road is within the city’s borders. Then, from just before Douglas Avenue to MacArthur Avenue, the northeast side is part of North Fair Oaks, while the southwest side—where the Fair Oaks Community Center lies—is part of Redwood City. It makes my head spin just thinking about it!

Although I’ve driven Middlefield Road many times, I figured that this was as good an excuse as any to do something I’ve been meaning to do for some time: walk down Middlefield Road to 5th Avenue. Because I wanted to check in on a couple of small downtown projects, I didn’t actually start at Main Street but instead joined Middlefield Road near the main branch of our Public Library. From there, heading down Middlefield I quickly came to Chestnut Street (alongside Jardin de Ninõs park) where I snapped this picture:

As you can see, the wires (for power, telephone, and cable TV) are pretty unsightly. When you drive you don’t seem to notice them as much (hopefully because you are concentrating on the road) but for the folks that have to live in the area, they are pretty unescapable.

If you haven’t been down Middlefield beyond the Costco, or just haven’t noticed the poles and wires down there, here is a photo I took while standing in front of the Fair Oaks Community Center, looking back towards downtown: 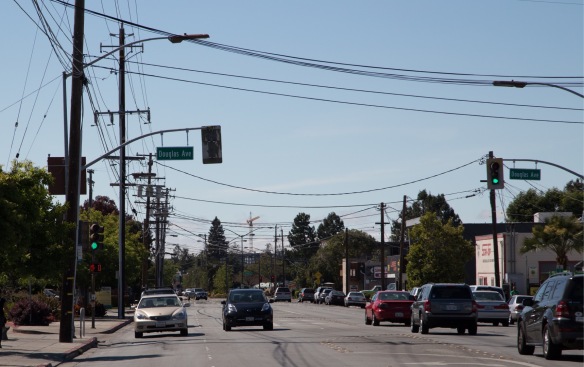 At this end, too, things are no better. Clearly, getting rid of all of those poles will not only enhance the look of the area, it also will make the sidewalks easier to navigate. And note that this project isn’t just about eliminating the wires. According to the Public Works department the project also involves “beautification and other improvements to enhance the pedestrain and bicycle experience.” That, I assume, means that Middlefield will be restriped to include bike lanes. As for beautification, well, we’ll just have to wait and see.

While I’m on the subject of less-than-attractive sights getting better, early in my walk I was pleased to note that the walls covering up the air conditioners on top of the Crossing/900 buildings have been painted to match the rest of the building. They don’t stand out nearly as much as when they were painted white: 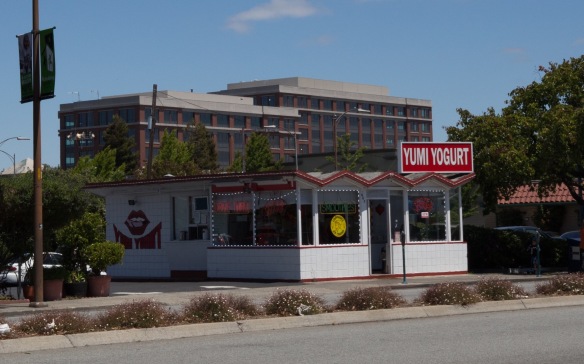 I mentioned earlier that there were some downtown spots I wanted to check up on. Now that Kemuri (check out their updated website!) and Blacksmith have opened, I’m turning my attention to two of our yet-to-be-completed eating and drinking establishments. First up, Timber & Salt. I first mentioned these guys back in my post Hunting Licenses; they’re going to be occupying a small storefront on Theatre Way between Arya and Portobello Grill. Since I last visited this location there has been small but visible progress: the floors are marked and the concrete seems to have been cut to accommodate what appears to be power, water, and drainage. The cuts and the colored dots on the floor in the following picture appear to trace out what I’m guessing will be the bar, against the right wall in this photo:

Given their connection to the highly-regarded Putney Farm (Stewart Putney is listed as Timber & Salt’s principal owner), I’m really excited to see what results.

I also dropped by the future site of The Striped Pig (at 917 Main Street, once the home of Little India Restaurant). It does appear that work is going on, although they’ve done a thorough job of covering the windows with opaque plastic so I couldn’t see the inside to be absolutely sure. I’ll keep checking, though.

While I was in the area, I dropped by the Main Street Dog Agility Park. Although I could only peer through the construction fences, it clearly is about ready to open: 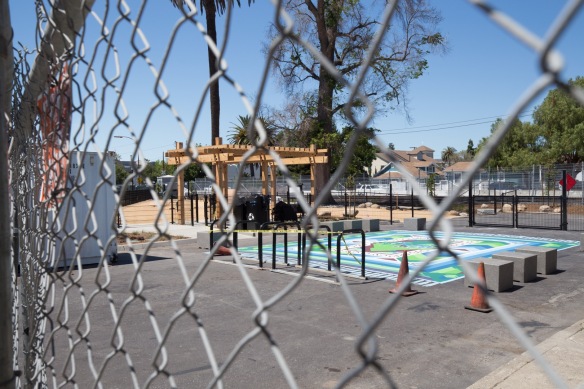 In fact, Redwood City’s newest dog park is scheduled to open this Saturday (May 30th): the Parks and Rec department is having a grand opening from 11:00 a.m. to 1:30 p.m. to which we all are invited. Although my wife and I don’t have a dog at the moment, I plan to drop by. The park is located at 1295 Main Street, at the intersection of Main and Beech. Note that parking is limited: there is no parking lot. Drivers will need to use the few spaces along Main and along the adjoining streets. Oh—and check out the Redwood City Parks Blog entry on this park. It goes into why and how the park was created. I found it a very interesting read.

Incidentally, if you don’t own a dog, but want one, or simply love domestic animals, Friends of the Redwood City Public Library are sponsoring “Paws for Celebration” at the main branch of the Redwood City Public Library starting at 12:00 p.m. on Sunday, June 7. Among other activities will be a pet adoption sponsored by the Peninsula Humane Society. For more information, see the Events section of the Library’s website.

Getting back to my walk, because I was nearby I took the opportunity to drop in on Main & Elm (the breakfast and lunch place located on Elm Street where Main Street Coffee Roasting Company once was; it is extremely close to our new dog park). They’ve nearly completed the transformation of the old warehouse behind the outdoor patio into a pub, and are also just about done with the revamping of the outdoor patio. By early June the pub should be open to the public, serving pub food and drink in a comfortably cozy indoor/outdoor space. From what I’ve seen, they’ll have an attractive inside bar (I particularly love the “barn wood” finish on the bar’s front) and out in the patio area there will be soft couches surrounding a fire pit. I was given to understand that the menu will start out small but will grow with time, so keep checking back once they open. Or keep reading my blog, since I’ll keep checking in on them.

On my way home I came back through downtown and was struck by how visible the apartments being constructed at the corner of Brewster Avenue and Winslow Street are. (I’m not sure what this project, which actually fronts onto Fuller Street, will ultimately be called: in some places, including Redwood City’s online list of current projects, it’s called “The Palacio”, while the builder’s website refers to it as “Fuller Street Apartments” and the architect’s site refers to it as “The Palacio/Fuller Street Apartments.) This 133-unit complex will ultimately attain a full height of five stories, but already, with only four stories framed, the building can clearly be seen from the vicinity of the San Mateo County Courthouse. Although it was a bit out of my way, the sight lured me in. I just had to go by and take some more pictures, including this one:

While it may look like a monolithic block now, the design is such that when it is complete it will look like an attractive jumble of tightly packed but separate buildings: 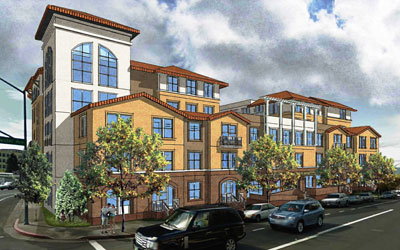 Peering through the construction fences I can see that there is an attractive central courtyard. No longer visible are the two levels of underground parking that can absorb 160 cars and 32 bicycles. According to the builder, thirty of the parking spaces will have electric vehicle charging stations, while the rest will be pre-wired for future car chargers. As well, the building is planned to include “a leasing office, clubhouse, fitness center, landscaped courtyard, and dog park plus an expansive roof deck with views towards the bay.” If that isn’t enough, it will also feature both solar hot water and photovoltaics (electricity-generating solar panels).

Whatever they call this thing, I find it very attractive. Unfortunately, the units are for rent (and not for sale), and given all of the amenities they likely won’t come cheap. To the project’s credit, I will note that there will be a few affordable units in this new complex: of the 133 total apartments, four of them are slated to be priced below market rate. Which is something, I suppose…

As I wrap up this post, take another look at the above picture of the Fuller Street Apartments under construction. Notice anything missing? Compare it with the first two pictures with which I opened this post. It is amazing just how much nicer things look when those overhead wires aren’t there, isn’t it? I can’t wait to be able to walk down the “new” Middlefield Road, and I’m excited to see what effect the transformation has on the area. $3.72 million to remove the wires? Sounds like money well spent, to me.

3 thoughts on “Right Down the Middle(field)”