Redwood City’s award-winning Downtown Precise Plan (DTPP) is a lengthy, highly detailed presentation of our leadership’s vision for the city we call home. Personally I find it a fascinating read, but I suspect that most people will only be interested in specific “nuggets” of information therein, and will find the rest a bit of a snoozer. That’s OK—that’s (partly) what I’m here for: to mine documents like these for those nuggets, and then present them to you for your edification.

The DTPP is very much a living document: it was originally adopted at the beginning of 2011, and then amended two years later. When I originally started this blog, back in August of 2013, I went through the first version of the plan but soon discovered and switched to the amended one. I didn’t study the changes between the two versions, but when I found myself searching for something I was sure that I had read but couldn’t find, I came to realize that there were some real differences between the two.

One such change—the biggest, in my view—was the removal from the plan of Depot Circle. For those of us who lament the lack of a proper entrance to Redwood City’s downtown, Depot Circle was to have been at least part of the solution. Imagine that you have just stepped off Caltrain at the Redwood City depot. Look around you. What do you see? The backside of Sequoia Station. The backside of a number of small businesses on Winslow Street. Nowadays, the backside of Crossing/900. And the small Winslow Street parking lot, behind which sits the side of the now closed Pizza and Pipes restaurant. Not terribly inviting, is it? Now take a look at what our city planners had envisioned:

Of course, this is just an artist’s rendering, and it probably never would have really looked like this. But the plan for a traffic circle with a parklet in the middle was a solid one, at least at one time. Here is how they described it in the plan:

Depot Circle is a proposed traffic circle, in the tradition of Paris and Washington DC, which will dramatically restructure the area around the train station. This restructuring will transform the area into a focal point and will create a grand and welcoming entrance to Redwood City for train passengers. It is also intended to provide a strong connection across the railroad tracks between the eastern and western sides of Downtown.

If it had been built along the lines of the above rendering, it would have been great. But the plan went even further—that drawing was merely phase 1. Phase 2 had the tracks being put into a trench, with the top paved over and a transit station (serving Caltrain, and possibly High Speed Rail) placed on top. Then, phase 3 got even wilder, envisioning the replacement of Sequoia Station and the extending of Hamilton Street through the middle to connect the traffic circle to El Camino and points east:

(In the above, the yellow blocks represent the train station. It, along with the parks to the left and right of it, would have sat on the “cover” over the sunken tracks.)

Now that was a vision. One that faded away, unfortunately, when the city agreed to allow the construction of Crossing/900. I’m somewhat pleased, however, to report that the basic idea for a grander entrance to the city didn’t entirely go away: Depot Circle disappeared from the Precise Plan, but something new, dubbed North Plaza, appeared and is now under construction. Although not nearly as ambitious, it has some of the same aims. Triangular in shape, North Plaza will be located on north side of the Crossing/900 buildings, in a space which up until now consisted of a rather wide sidewalk, a ramp to the Caltrain platform, and a large triangular planter:

This week has seen the demolition of the entire 6,000-square-foot space between the green construction fencing on the left (in the above photo) and the black metal fencing that demarcates the edge of the Caltrain platform. Once demolition is complete, construction will begin on, as the city puts it,

a new plaza that would provide new and improved public space in the Downtown, enhance the connections between Sequoia Station and the Downtown, support the development of new office and retail on Block 2, and provide a strong visual terminus to Hamilton Street.

(“Block 2” in the above refers to the property on which Crossing/900 now stands.)

The Crossing/900 developer is doing the work to create North Plaza, and they have thrown in $1 million towards the design and construction of this public space. It should be interesting to see how this comes out. You can be sure I’ll be watching!

One thing that a Caltrain rider will see if they board or disembark from a train at our station is something regular readers of my blog know I’ve been watching for a long time now: Kristi Marie’s. I’m thrilled to report that they had their soft opening on Tuesday, June 30 and are now fully open for business! I went by on soft-opening day, and twice since then with my wife, to sample her wares. I’m pleased to say that her fruit-and-custard-topped Brioche is absolutely delicious! My wife had a latte, which she absolutely loved, while I, a non-coffee-drinker, settled times for iced tea. If what we enjoyed is an indication of the overall quality of their wares, Kristi Marie is going to do very well in Redwood City. The place is very small—no tables inside, just a couple of nice benches against the building—but as a high-quality source for “grab and go” breakfast, lunch, and afternoon snack fare, it’s a great addition to the Redwood City food scene. Its not all sweets, too: there is plenty of savory fare for both breakfast and lunch, plus juices, coffee, and tea, so they should have something that will appeal to almost anyone. Do drop by their location on the corner where Broadway crosses the Caltrain tracks (between 7 a.m. and 4 p.m., Monday-Friday), and say “hi” to Kristi Marie.

There is no sign overhead, at least not yet, but Kristi Marie’s has the corner spot. Do be sure to admire their mural/sign on the building’s left-hand wall. It really is a work of art.

When it comes to food, I’m a bit of a traditionalist. Getting me to try new things can be tough. So when while walking down Theatre Way I saw the sign for “Vitality Bowls” I was a bit skeptical, to say the least. For the sake of the blog, however, I decided that I had to at least give them a try, and I’m honestly glad I did. I figured I should try the “Vitality Bowl”—it’s their name, after all—which is a layer of blended Açai berries and other fruits, juices, and soy milk, topped with granola, banana slices, strawberry slices, Goji berries, and honey. The bowls come in two sizes, but the smaller of the two was plenty for me:

It was very refreshing, especially on such a hot day! The flavors blended well, and I was quite satisfied when I scooped up the last bit of Açai blend from the bottom of the bowl.

Despite their name, Vitality Bowls’ menu is quite extensive, and not at all limited to bowls of fruit and vegetables. They also have smoothies, juices, soup, Panini sandwiches, and salads. Give them a try! You’ll find Vitality Bowls on Theatre Way, between Pizza My Heart and Yoppi Yogurt.

I wasn’t on Theatre Way just for Vitality Bowls, although they proved to be a nice distraction, and a very nice way to cool down on a hot day. I was also there to check on progress at Timber & Salt, who will open relatively soon between Portobello Grill and Arya. They bill themselves as “an American Bistro in Redwood City featuring craft cocktails and artisan comfort foods”. They are actively hiring, and plan to open this September. Back in February when I wrote my post Hunting Licenses I connected a few dots to figure out that this place is being brought to us by the proprieters of Putney Farm, in Woodside, and indeed that turns out to be the case. So it should be an interesting place! Progress-wise, there is little to see inside at the moment, but I did happen to spot some small L-shaped markings on the ground that presumably identify the extent of their outside seating:

In this same row of storefronts, there is also a sign up in an empty one indicating that it will be the future home of “Cyclismo Cafe”. A quick Internet search turned up very little, but contrary to what the name implies, Cyclismo Cafe may turn out to be styling consultants: cyclismocafe.com is a business that provides wardrobe makeovers, trip planning, and “creative direction for photo shoots” (?). You can be sure that I’ll be following this one with great interest.

Over on Main Street, I checked in on The Striped Pig. I still don’t know a whole lot about what this will be, other than that they will serve alcohol. But I took advantage of a hole in their temporary window coverings to take this shot, which clearly shows that they are in the thick of construction: 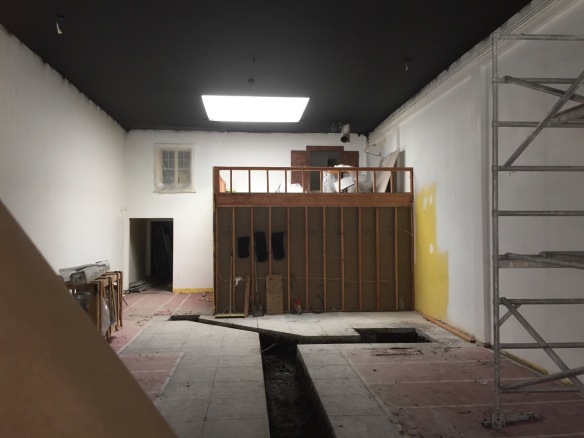 I ended my walk by checking in on the Main Street Dog Park, which was being enjoyed by a handful of dogs, and the new beer garden and wine bar in the back of Main & Elm, which is nearby. Main & Elm, which shares a common ownership with Lutticken’s on Alameda de las Pulgas in Menlo Park, has created a very comfortable space out of the old storage building behind what used to be Main Street Coffee Roasting Company:

Because Main & Elm, which used to be a breakfast-and-lunch place, is now serving beer and wine, they’re now staying open until 11:00 p.m. and are now serving dinner. Although I have yet to try their dinner items, and although the “soft opening menus” I saw were not what they will ultimately use, the menus listed exactly the kind of food I like: Seared Hanger Steak, Roasted Chicken with Mashed Potatoes, a burger (with bacon!), Lamb Sausage with lentils, Prawn Ceviche, various salads, a cheese plate… I’m getting hungry just writing about it! If you haven’t been down to Main & Elm lately (or at all), do check them out. They’re in a quiet part of town, one where you shouldn’t have much trouble finding parking. They have live music at times, and have a really nice outdoor patio with couches and a fire pit. Main Street Coffee used to have its regulars, and it appears that Main & Elm is quickly attracting its own steady clientele. With their winning formula, its easy to see why!

[In the interest of full disclosure, Steve Penna, who has recently started publishing select blog posts of mine in the print version of his monthly The Spectrum Magazine, also manages Main & Elm for Bob Lutticken.]

16 thoughts on “Breaking the Circle”