Lately my wife and I have been doing a lot of traveling, and, oddly enough, for each of the last three trips we’ve gone to a different Bay Area airport. This is one of the benefits of living in Redwood City: our proximity to all three of the Bay Area’s major airports allows us to consider three different airports in order to pick the most convenient or cheapest flight. From our house, SFO is only 15 miles away, while Mineta San Jose International Airport is 22 miles and Oakland International is just over 30.

If distance was the only factor, we’d always fly out of SFO. But the other two airports are close enough that we rarely consider the distance between our house and the airport. Instead, we consider the cost of the flight, the flight times, the ease of navigating the airport parking and the terminal, and the on-time record. These last two factors, in particular, are why we only rarely fly out of SFO: we find it the hardest of the three to navigate, and due largely to the weather, it has the worst on-time record.

Unlike the other two, the San Francisco Airport isn’t located in its host city: it is located in an unincorporated part of San Mateo County, adjacent to Millbrae and San Bruno. Back in the late 1920’s San Francisco, recognizing that it didn’t have the needed space within the city limits for an airport, sent a “request for proposals” with detailed requirements to the various Bay Area airfields in the hope that one could serve. The airport that best fulfilled those requirements (but one)? Redwood City.

Like me, I suspect that most residents of Redwood City didn’t know that the city once had its own airport. And not just any airport: according to at least one source, by the time San Francisco came looking Redwood City’s airport was one if the three oldest operating airfields in the country. As well, at one time our airfield housed one of the three largest aircraft manufacturing plants in the US! Of course, this was in the very early days of aviation, but still…

Why didn’t San Francisco choose our airfield? Although it met all of the City’s other requirements, it was rejected because it was deemed to be too far from San Francisco. Instead, San Francisco purchased Mills Field, the land where San Francisco International Airport now stands. Unfortunately, the opening of San Francisco’s airport seems to have been a large nail in Redwood City Airport’s coffin.

Redwood City Airport (also known for a time as Sanders Airport) was in existence from roughly 1916 to 1940. It was located between today’s Veterans and Broadway, below Chestnut. The runway was roughly where the Office Max/Foods Co center is now:

The runway ran along the shore side of Bay Rd., with its southern end near Marsh Rd. (or possibly 2nd Ave; the records aren’t clear). Chestnut Street marked the airport’s northern end. At the time, Chestnut was the only street in the vicinity (although it wasn’t paved); neither Veterans nor Broadway existed, at least not in that part of the city. Neither did Woodside Rd. or Highway 101, for that matter.

The airport’s hangars were where the San Mateo County Corporation Yard is now (behind the Office Max on Chestnut St., where it intersects with Spring St.): 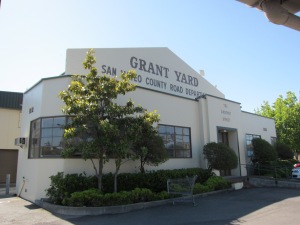 The Redwood City Public Works buildings—across Broadway from Office Max—also stand on property that was once the airport:

For some fascinating pictures of what Redwood City Airport looked at back in the day, see http://www.airfields-freeman.com/CA/Airfields_CA_SanJose.htm#redwoodcity.

Redwood City Airport was founded by one Silas Christofferson. He had a flying school in Alameda County that, sometime in 1916, he moved to Redwood City. He then constructed an aircraft manufacturing plant and started a flying school at the airport. Later that same year, however, while flying in an air show in Redwood City Christofferson failed to pull out of a steep dive and plowed into the ground in front of the crowd. While he survived the crash (barely), a punctured lung did him in a few days later.

After Christofferson’s death various owners continued to operate the flight school and the manufacturing plant. In 1920 the airfield lease was purchased by Walter T Varney; the field briefly became known as Varney Field. Varney later went on to found Varney Air Service in Pasco, Washington, which grew into Varney Air Group and eventually became one of the key companies that were brought together to form United Airlines.

Throughout its life Redwood City Airport had its share of aviation notables drop by for a visit. For instance, Eddie Rickenbacker, the WWI fighter pilot, flew to Redwood City from Los Angeles. After an overnight layover, he then made the first recorded coast-to-coast flight (with stops; the first was in Reno). An aviation first that started right here in little ‘ol Redwood City! Or, there was Amelia Earhart. She flew into town in early 1920 on a trip to visit friends and to observe the flying school. Seventeen years later she would embark on her ill-fated attempt to circumnavigate the world.

The last listing for the airport in the pilot’s airport directory was in 1939. The airport is presumed to have closed sometime between 1939 and 1943, since the 1943 USGS topographical map no longer included the Redwood City airport. In 1948, although the airport had long been closed, aerial photographs still showed the airport hangar. Sometime after that, though, the hangar was torn down. The remaining airport buildings were torn down in 1970, except for the Aviation Cafe which apparently became the Hideaway Restaurant. It appears that that building, at 739 Chestnut St. (on the corner of Chestnut and Spring St.), turned into Apatzingan Market and Taqueria: 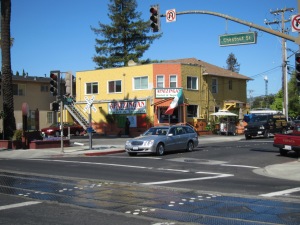 All recognizable traces of what was once a large, well-known airport right here in Redwood City are now gone. I, for one, am glad that our airport didn’t become SFO; the changes to the community that would have resulted would have been enormous (and detrimental, in my opinion). But then again, flight delays due to weather would likely be a lot less frequent if Redwood City had been chosen for San Francisco’s airport, rather than San Bruno…