Back in the mid ’80’s when my wife and I moved to Redwood City, we did what a lot of people do: we fell in love with a house and bought with our hearts, rather than our heads. During escrow we did some research, of course, and checked out the area somewhat, but honestly, we got lucky. Although our street is a tad busier than we’d like, the location of our house turned out to be ideal for our growing little family. Our local schools turned out to be excellent, we have a wonderful park (Stafford, which hosts summer concerts every year) within two blocks, and the hospital where our second son was born is also only two blocks away.

For many, many years I commuted to work on Caltrain. It hadn’t occurred to me when we bought the house that the Caltrain station was within walking distance, but I was delighted when I discovered that it was just over a mile away. It was an easy walk and a great way to start (and end) my work day. Now that I have more time, I of course walk all over Redwood City. It never ceases to amaze me just how much of the city is reachable on foot from my house.

Most of my walking is just that: walking. But it is amazing how much hiking—actual, through-the-woods-with-hiking-boots-type hiking—there is within a short walk from my house. Most if it isn’t actually in Redwood City, but given that we are located in the northwestern part of the city my walking territory also includes parts of San Mateo County and San Carlos. And each of those has two excellent parks where you can get lost in the woods just out of sight of the nearby houses.

There is one such park that is within the city limits, however, and is reachable by foot from my house: Stulsaft Park. If you’ve never been into Stulsaft but have merely driven by it on Farm Hill Blvd you’d be forgiven for not knowing what treasures it holds. From Farm Hill it looks like any other city park, with play equipment, picnic areas, restrooms, etc. But that is just the tip of the iceberg: at 42 acres, it is the largest in the Redwood City parks system, and the bulk of that 42 acres cascade down the hill behind the play area. Stulsaft’s trails meander down to and along a tidy little creek, and then head up the other side of a small valley. The far side of the park contains a small parking lot that is accessible from Recreation Way, which is a short street that leads to Goodwin Ave near Alameda De Las Pulgas. You can either walk from one side of the park to the other, as I occasionally do, or you can easily loop back and return to your starting point.

I should note that at Stulsaft there are posted signs indicating that there has been evidence of Mountain Lion activity. Although I have yet to see anything dangerous on any of my hikes, be sure to heed the warnings and keep an eye open when in these wilder areas of the city and county. And keep your eyes open: if you walk quietly you will see countless birds, deer, and other more friendly forms of wildlife.

I don’t often make it up to Stulsaft, however. More often I wander up Whipple, pass behind Sequoia Hospital, and drop down onto Cordilleras just behind the Mormon Church. From there I usually head off along Cordilleras in the direction of Edgewood Park. Cordilleras hits Edgewood Rd before the park, unfortunately, so I do have to walk along Edgewood a ways in order to get to the park—and there are no sidewalks and a minimal road shoulder on which to avoid the cars speeding between 280 and the Redwood City/San Carlos area. But once there I am free to explore Edgewood County Park and Natural Preserve‘s full 467 acres [map link]. As most of you know, Edgewood is an excellent hiking park: its hills and varied vegetation make for an interesting variety of sights. There are numerous trails to suit any taste, some easy and some more strenuous. And the views from various points in the park can be quite spectacular: the bay is easily visible, as is the valley along which Interstate 280 runs. You can hike along one of the loop trails, or you can do as I usually do: hike to the highest point in the park and leave through the upper exit, which puts you among the houses near the top of Emerald Hills. I then follow the roads back to my house, often varying my route so that I can learn the maze of twisty passages that make up Emerald Hills and the Emerald Lake area.

Due to its high visibility along Interstate 280 and Edgewood Road, Edgewood Park is well known and very popular. Somewhat lesser known is its next-door neighbor: Pulgas Ridge Open Space Preserve [link to park map]. Pulgas Ridge doesn’t have some of the amenities of its larger neighbor, but it has its own excellent hiking trails and another bonus: a 17.5-acre off-leash dog area. Pulgas Ridge is almost directly opposite Edgewood Park, on the other side of Edgewood Road. You don’t access it directly from Edgwood Road, however: to get there you turn on Crestview and then almost immediately turn left on Edmonds Road (towards the Cordilleras Mental Health Center); about halfway to the Mental Health Center you’ll see the parking lot for Pulgas Ridge. This 366 acre park is managed by the Midpeninsula Regional Open Space District, and boasts 6 miles of trails, one of which wanders right up to the rest area off Interstate 280. (Unfortunately you can’t get to the rest area from the trail: there is a sturdy fence that separates the two.) The parking lot lies at the mouth of a box canyon that makes up the open space preserve. From there the trails wander up the sides and across the back of the canyon, which means that you’ll experience a pretty good elevation change when hiking Pulgas Ridge. Your hike begins with an easy walk along a road that travels the length of the canyon, but quickly turns strenuous as you ascend to the upper reaches of the canyon. As with Edgewood Park, you’ll find yourself passing through multiple different ecosystems: after you leave the road you find yourself alongside a small creek, and as you begin to climb the canyon sides you are surrounded by thick woods. Near the top, however, the woods open up and you find yourself exposed to the sun and surrounded by grasses and native bushes. The trails are excellent, however, and well marked. And in the parking lot you’ll find a paper map you can take along with you on your journey.

Given the sizes of Edgewood Park and Pulgas Ridge, you wouldn’t expect to find even more great hiking opportunities in the immediate area, but you’d be wrong. In fact, the ones I explored on my most recent outing are even closer to my house than Edgewood and Pulgas Ridge. One block north of Edgewood Road along Alameda de las Pulgas is Eaton Ave. If you follow Eaton Ave westwards to the very end of the road, you hit the gate to Eaton Park. This gate marks one end of the Eaton – Big Canyon Trail that traverses Eaton Park and links Eaton Park to its sister, Big Canyon Park [park location map]. Unlike Edgewood and Pulgas Ridge, except for one tiny corner both of these two parks lie entirely within the boundaries of the city of San Carlos. 57-acre Eaton Park has multiple entrances and a couple of great trails, as shown on this map: 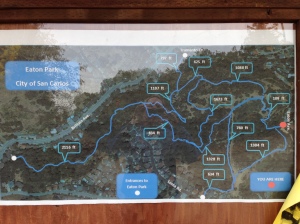 When entering Eaton Park either from Eaton or from Brittan Ave., you can expect to make a rapid ascent. The trail eventually levels out, however, and for the bulk of your hike you will have glimpses of the canyon along which Brittan runs, the houses that border the park, and some excellent views of the bay: 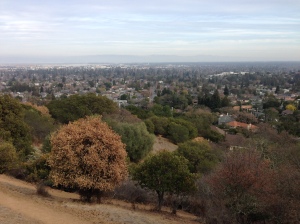 The Brittan Ave. entrance to Eaton Park is narrowly wedged between two houses and is directly opposite from Big Canyon Park. This entrance consists of a long stair squeezed between two adjacent properties:

Using this entrance to Eaton Park you feel as if you are hiking through someone’s backyard (and, in fact, you walk right along their fences and can get a great look into their yards) but you quickly leave the houses behind and find yourself deep among the native oaks that line the hillside and mostly screen the trail from the nearby houses.

If you instead descend this stair and exit Eaton Park onto Brittan, you’ll see Big Canyon Park’s main entrance directly across the street. Driving up Brittan, Big Canyon Park is on your right, just after the street tilts up for its final ascent to Crestview:

At the Brittan Ave entrance to Big Canyon Park there is a small, relatively level area where people can relax and play with their dogs. The majority of the park, however, is draped along the surrounding canyon walls, accessible from a single trail that is basically just a loop following the perimeter of the park: 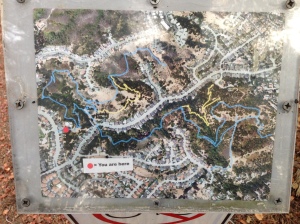 As with Eaton Park, when hiking in Big Canyon Park you’ll begin with a fairly steep ascent and end with a somewhat steep descent. The remainder of the trail is relatively level, running along the top of the park just below the houses that hang from the northern ridges. Because Big Canyon is a side canyon off Brittan, it doesn’t face the bay and so only from one or two places do you actually see the bay itself. There is one spur off the main loop that does lead towards the bay, and I followed it to see if it led to an exit from the park. Unfortunately, after walking for quite a while I found this: 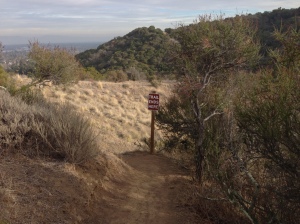 I will admit to pushing on just a bit farther, since despite the sign the trail seemed to continue on. But it quickly petered out (and there was one section of the trail that had fallen away) with no exit in sight, so I was forced to retrace my steps and return to the loop. Continuing around the loop there is another short spur to the west that leads to Big Canyon Park’s one other access point. This is directly across the street from the entrance to Crestview Park, along what appears to be a utility access driveway wedged between two houses: 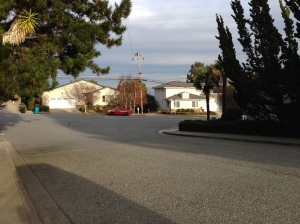 Being so close to Crestview Park I took the opportunity to lap its soccer fields before returning to Big Canyon Park and completing the loop. Having done enough hiking for one day (and having burned more calories than on any of my walks so far: all the ascents and descents in the two parks were an excellent way to raise my heart rate and burn calories), I elected to return home via Brittan and Alameda de las Pulgas.

Hidden gems such as these parks are one of the reasons we live in the Bay Area, and are definitely one of the best things to recommend the Redwood City area. If you enjoy a good hike, I can heartily recommend any of these easily accessible parks. And if you can get there by walking, as I can, all the better!