I do love a good map. It occurred to me the other day that although I knew where the border between Redwood City and San Carlos was (at least, in the vicinity of El Camino), I wasn’t entirely sure where the border between Redwood City and Atherton was. This caused me to do a quick Internet search for a map that shows the boundaries of the city of Redwood City. The border isn’t nearly as clean as I thought it might be: I was surprised to see just how much it zig-zags around, and I hadn’t realized that the North Fair Oaks area was an unincorporated part of San Mateo County (and not part of Redwood City or Menlo Park). Over time, I’m going to try to explore the boundaries of the city, to see what surprises lie within (and without) of our borders.

This week I set off for one of my favorite destinations of late, the southeast edge of the city (I use the term “edge” very loosely here; Redwood City’s boundaries wander all over the place, and the edges are anything but smooth). As I’ve done in the past, I was aiming for where the boundary crosses El Camino, just up from Selby Lane. I wanted to get up-to-date pictures and take a closer look at the Planned Parenthood clinic (which, technically, is outside the city of Redwood City; it lies in North Fair Oaks), now that they have their official signage up. As is my habit I planned my route so that I could visit a number of other sites that I’ve been keeping an eye on.

I began, as usual, from our house near Sequoia Hospital. Wanting to get some up-to-date pictures of the Dodge dealership—although the building renovation isn’t quite complete, the dealer has begun stocking the lot with various new Dodge/Chrysler/Jeep vehicles—I headed down Whipple to its intersection with El Camino. I spent a bit of time trying to get a shot showcasing the history of the property: along with the numerous banners on the buildings that declare it to be a Del Grande Dodge/Chrysler/Ram/Jeep dealership, the Mazda sign, although covered with plastic, is still in place, as is a single cloth banner on a light pole proclaiming the site to be the location of Kia Redwood City. Unfortunately, the rather healthy street trees blocked my view of the Kia banner, so that I couldn’t get all three of these together. I had to settle for a shot of the Mazda and Dodge signs, along with some of the dealership’s stock: 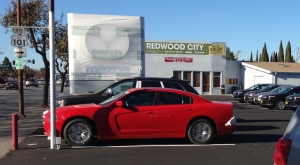 There were one or two people peering at the cars, so perhaps the dealership is already doing business, even though it doesn’t appear to be officially open yet.

Heading south on El Camino, I took a peek in at the old cookie place on the corner of El Camino and Brewster. Although work was proceeding, there wasn’t any notable progress so I moved on. After crossing Jefferson, I took a short jog towards the tracks so I could check up on “Elan Redwood City,” at 145 Monroe (behind Redwood Trading Post, just west of the Caltrain tracks). This 305-unit apartment building is making good progress, having completed the below-ground work and now proceeding skyward. Eventually its six stories will loom over and surround the little four-story apartment building with the painted-on windows:

This huge C-shaped building will thus occupy most of the block, leaving only the center bit, with its existing apartments and one or two small commercial buildings, accessible from Franklin Street.

Back out to El Camino, I slipped under Woodside Road and continued to the south, dodging the cars that were entering and existing Woodside Road and the Target shopping center. Having successfully avoided being run over, I crossed over to the west side of the street to examine the building going up just north of the “Pronto Rotisserie and Pizza.” Once the site of Suraj Indian Cuisine, the building going up now is very different in character: it will be a large metal and glass box. And rather than being yet another a restaurant, this building will house a University Art Center store! This is a much-needed addition to the city of Redwood City—to the whole area, in fact, as my wife can attest. She does landscape design the old-fashioned way (sans computer), and has been having an increasingly difficult time finding a source for the vellum and other supplies she uses while sitting at her drafting table. With the closing of the art supply store that used to be on Broadway (near Goetz Sports), and the closing of the drafting supply that used to be on lower Laurel in San Carlos, she finally resorted to ordering large sheets of paper online. Which seems so incredibly inefficient… But our gain is Palo Alto’s loss, it seems; increasing rents caused the owners of University Art to look for a place they could purchase, but the cost of commercial real estate in Palo Alto left them with no choice but to look elsewhere. Thus, the Palo Alto store will close and relocate to their new location at 2550 El Camino Real in Redwood City.

There wasn’t much to see as I passed “The Lane on the Boulevard” (formerly, Mel’s Bowl). The 141-unit apartment building is partially covered with stucco now, so at least the final exterior look is coming clear. I’m sure that the developer is quite busy working on the interiors; the building is due to be completed later this year. Later on my walk I did wander around to the back to get a different perspective on things, and managed to get a shot of the development’s parking garage, which isn’t visible from the front (El Camino is to the left, beyond the edge of the picture):

From “The Lane” I hopped back over to the other side of El Camino so I could get to the Planned Parenthood clinic. The building now has simple, permanent signs on the sides of the building. The old free-standing sign at the corner of the property is looking kinda lonely, only showing the word “Leased” where once Chevy’s would display Mexican-food related puns in an effort to entice customers. 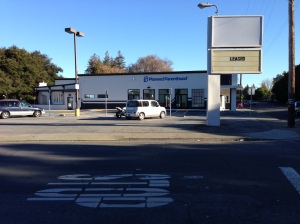 For now Planned Parenthood appears to be occupying only part of the building. The main entrance, on the corner of the building where the parking lot meets El Camino, is currently not being used and the windows that face El Camino look into rooms that have not yet been finished. Instead, clients use a door towards the back of the building (the glass door near the left side of the above picture). I presume that over time Planned Parenthood will expand their operation and eventually occupy the entire space: there are no indications that the building will be shared with anyone else.

Although the Planned Parenthood clinic marked the farthest point of my journey, there was one destination I was particularly eager to see:

Fantasy Marshmallows is located in a small storefront with an eye-catching paint job on El Camino just up from the Redwood Pet Hospital. Although they’ve been open since early December, when I went by they weren’t doing much business. I wish them well, but I question the demand for their product. What do they do? They use marshmallows and various sugary decorations to create edible flowers, people, and animals on sticks for parties and other special events. Here is one of the pictures from their website, showing their typical product:

Maybe marshmallows are a big thing in Hispanic culture. I hope so, for their sake. They do have two four-star ratings on Yelp, but I’m not sure that the star ratings are justified given what the Yelpers wrote about the product. Neither seemed all that excited about actually eating these things, although they did appreciate the decoration. Well, if Edible Arrangements can make a successful business doing something along these lines with fruit, perhaps Fantasy Marshmallows can make a go of it.

That about does it for this post. I did have one final (very different) picture to share, from a yard near our house:

The sign reads “in Loving Memory of my Dear Wife Ann”. It faces the house so that the homeowner can see it (along with the tree) every time they look out their front window. This sign really touched me. I didn’t know Ann, but I’m truly happy to know that she was loved, and that she won’t be forgotten.