Today’s post is on the shorter side: our recent heatwave has kept me indoors more than usual. By Friday things had cooled down enough to be walkable, but that left me little time to put my post together. Thus, I opted this week to take a couple of excursions by car. Those excursions served to remind me just how much better it is to be out on foot: I spent more time making my way to each destination, and then finding a suitable place to park, than I did taking pictures. And I undoubtedly missed some interesting small things along the way, given that I had to pay close attention to my driving. So this week’s post will largely consist of some updated photographs of some of the large projects going on in our area.

This first picture is not of a project, but on my way from my car to check in on the 1548 Maple Street project, the county’s Navigation Center, and the Blomquist Extension, all of which are very close together, I took this picture of Redwood Creek, showing what little is left of Docktown Marina. The two larger floating homes you can see in the above picture are both boarded up and scheduled for removal or demolition; the handful of boats that still contain residents are located down towards the far end.

This is a picture of the 1548 Maple Street project. It may not look like much at the moment, but there is a great deal of infrastructure work that had to be completed before construction of the 131 townhomes gets underway. If you look closely you can see a lot of fire hydrants, sewer pipes, and other conduits sticking up from the raised site. At some point, I believe that the wires currently strung between the telephone poles will be undergrounded, and the poles removed. For now, though, those poles roughly mark the boundary between the 1548 Maple Street project and the site of the county’s Navigation Center (which is beyond the left edge of the above photograph). 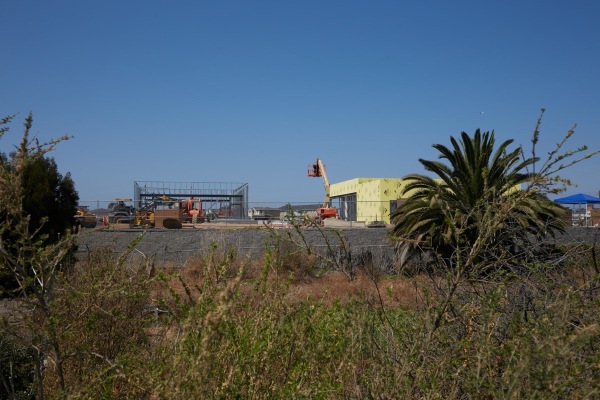 This picture shows the Navigation Center site as viewed from Maple Street near the Redwood City Police Station. The yellow building (it won’t ultimately be yellow, of course; that’s just insulation) will be the center’s dining hall. The building to its left, which currently is still in the framing stage, should be the combination Community Building/Support Center. Of all the buildings that will ultimately make up this Navigation Center, these two are pretty much the only ones being built using conventional construction methods. Pretty much everything else will be prefabricated.

This picture shows some of the work going on at the Blomquist Extension project site. Currently, Blomquist Street dead-ends into Maple Street next to the Redwood City Police Station. This project aims to extend Blomquist between the Police Station and the Navigation Center, where it will curve left around the back of the Police Station and head towards Highway 101. The initial section of the new road has to extend across a low wetlands area; to do so, it will run along a small bridge. What you see above is the drilling rig that is being used to drill holes for the bridge’s footings, and a crane holding the rebar that will be dropped into one of those holes to provide strength for that footing. Not visible in the above is the cement mixer that will pour the cement for the footings: I couldn’t get a better angle on that today given the flurry of activity going on there right now.

This is the new CVS Pharmacy that is being constructed at the corner of Woodside and Bay roads. The block walls appear to have attained their final height. As you may recall, this pharmacy needs to be completed so that the old CVS just across Woodside Road can be torn down to make way for the mixed-use (office and residential, with a small amount of retail) Broadway Plaza project. Until this new pharmacy is up and running, though, expect to see the large project site across the street continue to sit empty, gathering weeds. 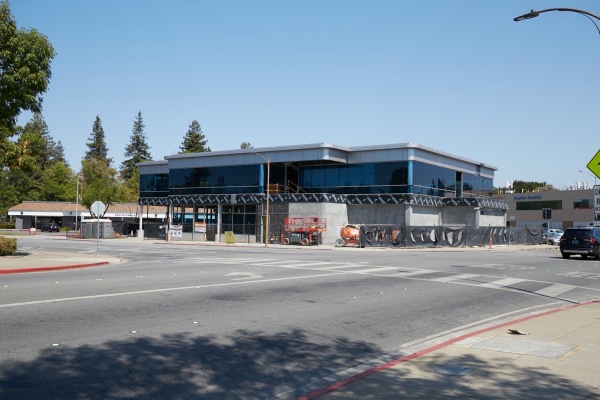 In another part of town, the above small office building is slowly nearing completion at the corner of Woodside Road and Massachusetts Avenue. The lower floor, which is almost entirely made up of a parking garage (and a small lobby) appears to be getting a stucco-type finish, while the upper floor (where all of the offices will be) is, as you can see, pretty much all glass with metal trim. More of that same metal trim will be applied to the band between the upper and lower floors that for the moment is covered by some sort of water barrier material.

The Veterans Memorial Building/Senior Center project is moving swiftly now. The structural elements of the building seem fully in place, and now most of the work is concentrated on the building’s interior.

As you can see from this view (if you look closely), many of the interior walls have been framed, although they have not yet been covered with drywall. As for the wood you can see across the top of the first floor, that is just temporary. That wood is part of the form for the concrete that will provide a base for the second-story running track. Note how the ceiling is open above the track: that portion of the building will be open to the sky (the sides there will be open as well), giving runners plenty of fresh air and sunshine.

No project roundup would be complete without an update on the ELCO Yards project. The above image shows where the two-level subterranean parking garage beneath building “B” — the office building with the large “family friendly” retail space and childcare center on the ground floor to be built on the former site of the Towne Ford showroom and service center — will soon be constructed. The digging for this garage appears to be pretty much complete (although as you can probably see, they’ve understandably left a dirt ramp by which trucks can enter and exit the site), so construction on the garage itself should soon get underway. 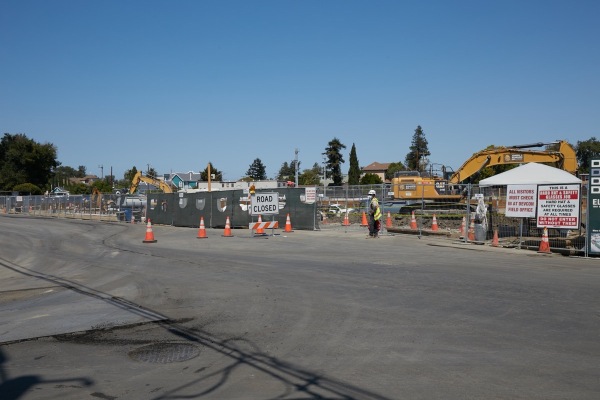 The other portion of the ELCO Yards project that is currently seeing a great deal of activity is the large “parcel E” that sits between Main Street and the Caltrain tracks, and extends from the Main Street Dog Agility Park to Chestnut Street. The metal I-beams that will form the supporting walls of the large two-level underground garage here are apparently all in place: digging for that garage is proceeding in earnest. When I was there I observed a steady stream of empty dump trucks approaching the site, and another stream of full dump trucks leaving the site. In order to facilitate all of this activity, the portion of Main Street fronting this building is temporarily closed, as you can see in the above picture.

That’s pretty much it for this week. As you can see, though, work continued on right through our extreme heat. I’m just thankful that the “heat dome” has moved on, and that our temperatures have returned to a more normal level. For the next week, in fact, depending upon where in the area you are our highs may be in the 70’s, with at least one forecast calling for Thursday’s high temperature to be 69 degrees (that day’s low shows 58 degrees). I don’t know about you, but I’m putting away my short pants: I’m back to wearing jeans again, at least for now.

2 thoughts on “Taking the Heat”