Sometimes, you just get lucky. My wife and I had just made the final delivery of our regular Meals on Wheels route, and were heading back to the kitchens in Menlo Park to drop off our paperwork and our insulated container. Since our last delivery is in Redwood Shores, my habit is to get on Highway 101 southbound and get off at Marsh Road. As we were heading down Marsh Road, my wife noticed something that caused us to make a quick detour: a large semi toting a pre-fabricated ADU (Accessory Dwelling Unit) from Abodu was just turning onto Page Street.

Abodu, in case you aren’t familiar, “develops prefabricated modular housing units designed to be used for forming vacation homes, guest accommodations, or for extra space in a backyard.” They are relatively new, having been founded in 2018, and are headquartered right here in little ‘ol Redwood City (their offices and showroom are located at 2424 El Camino Real, directly across from the O’Reilly Auto Parts store in the Target shopping center): 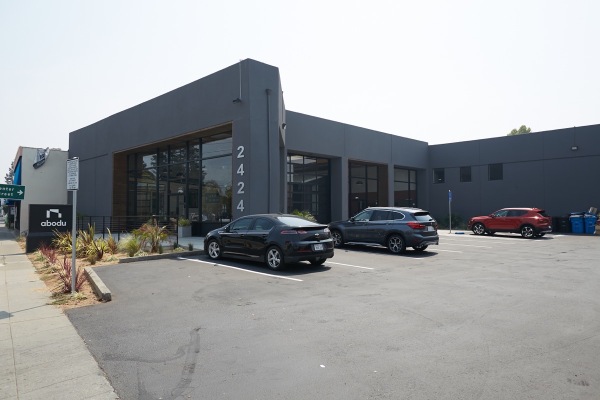 When you order one of their stand-alone modules, it is delivered to your site and craned into position. Prior to delivery, though, one of Abodu’s contractors will have constructed the necessary foundation upon which the module will be placed, and run all of the necessary utilities. All in all, from signing the paperwork for the unit to having it delivered to your location takes around six months, but the on-site prep (including the construction of the foundation) can take as little as two weeks — so unlike with traditional forms of construction, you won’t have workers on your property for the entire six months.

Abodu sets the price of the project up front, avoiding many of the costly overruns associated with typical home construction. They note that in the event the cost of the project does change, they guarantee that they won’t profit from those changes. They also note that they do not mark up permitting fees. Getting that permit these days is much simpler than in the past, given the push for all forms of additional housing: Redwood City has greatly streamlined the permitting process for accessory dwelling units, and relaxed a few key rules when it comes to placing the building on your property. But getting back to pricing, that depends upon your site and the unit you choose. Estimated typical all-in costs (including site work, permits and taxes) range from $268,800 for a standard Abodu Studio, to $352,800 for an Abodu Two.

Getting back to today’s action, I spoke briefly to the homeowner, who was very excited to be receiving his new ADU: he’d been waiting six months, and today (Friday, August 26) was the big day. He’d bought an Abodu One, which was to be his new home: he plans to move himself into his new one-bedroom ADU, and rent out his main house.

As for the day’s action, I first took a couple of images showing the house being trucked into the area. Here is one showing the truck making the turn from Page Street onto 17th Avenue (and just avoiding the “slow street” bollards; Page Street is one of Redwood City’s slow streets): 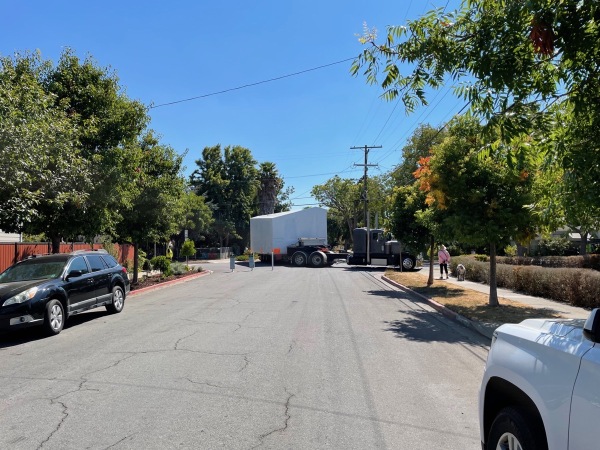 Because I knew that it would take some time to get the ADU into position and attach it to the crane, my wife and I opted to not follow it immediately, but instead to go down to Menlo Park and drop off our Meals on Wheels items. We then made a brief stop to grab some lunch (which we consumed later), after which we returned to the area. It was easy to figure out where the truck had been heading, since the crane towered above the neighborhood: 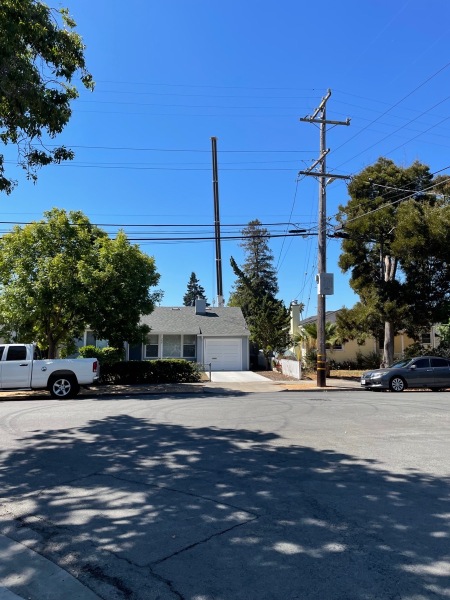 Upon returning, we parked about two blocks away and walked in to the area, which of course was completely blocked off to vehicles temporarily. We arrived just as the strapping had been placed beneath the house and then affixed to the crane, and waited while the straps were checked and various bits of wood were used to ensure that the straps didn’t damage the house as it was hoisted into place. Then, when all was ready, the ADU was finally lifted off the back of the truck: 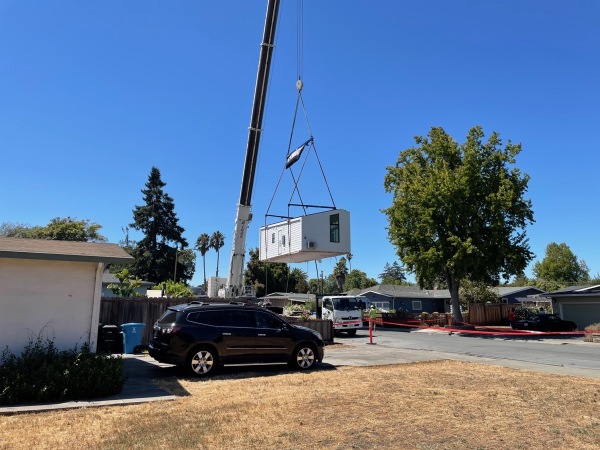 It was then lifted over the house, destined for what I thought was the backyard of the gray house you see to the left in the following picture: 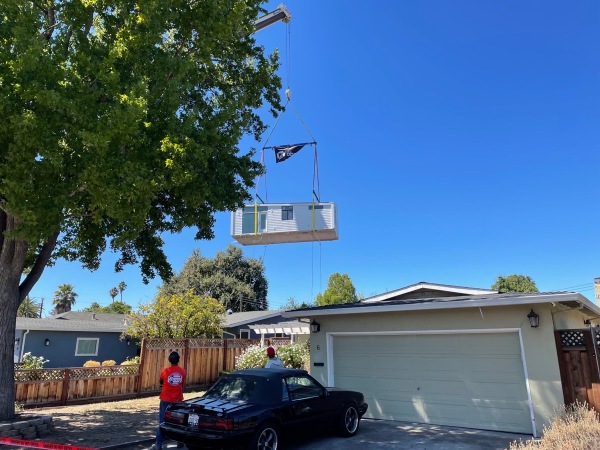 Instead, though, not only was lifted over that house, but over its yard, its back fence, the telephone wires above that fence, and into the backyard of the neighboring house to the rear! For whatever reason — because the reach was shorter, or because it was better to block off this cul-de-sac (Wayne Court) rather than 15th Avenue, where the main house and yard were located — the crane company chose to do it this way. In any case, they apparently can reach as far back as 100 feet with this crane, so they can get one of these into many of our backyards (if it needs to go farther, they apparently have solutions, but of course charge extra). 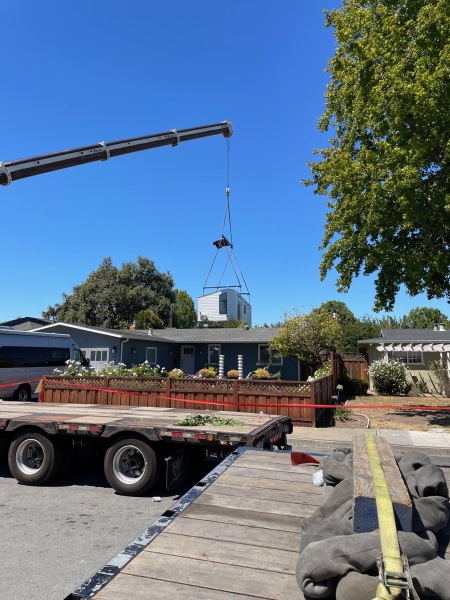 Note how the house has been turned; the homeowner opted to place it longitudinally, along his side fence towards the rear of the yard.

On our way home, my wife and I headed over to 15th Street to see what the operation looked like from there: 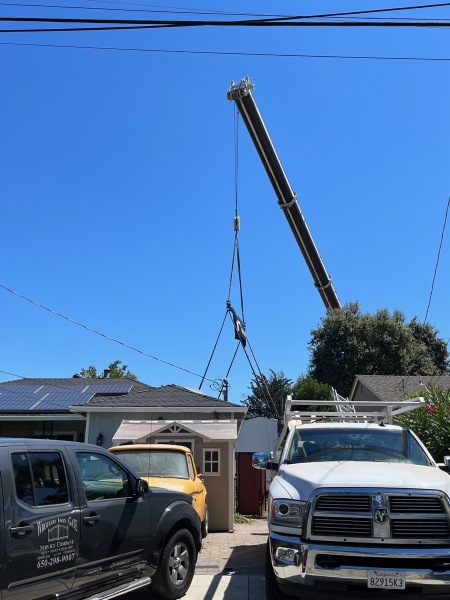 Here you can just make out the end of the ADU behind the main house. (I assume that the small shed on the driveway used to be in the backyard and was moved out front to clear the way for the ADU…)

So, that was the lucky happenstance for the day. My wife and I have been talking off and on about adding an ADU to the rear of our property for some time, and have considered getting a prefab unit something like this one. Given the apparent ease — and relative speed — with which the Abodu ADU was delivered and set onto its foundation, I may well just go by the Abodu showroom and have a chat with them about how feasible one would be to add one to our property. Although in our case we wouldn’t ever move ourselves into it — a studio-sized unit is all that would really fit — we like the idea of having a stand-alone living unit that we can rent out to a teacher or nurse for a truly affordable price. And the extra value it would add to our property wouldn’t hurt…

As usual I took a long walk this week, and although a lot of what I saw was merely incremental progress on some of the big projects going on in town, there were two things of note that are worthy of mention. First, this sign, on the small triangular parklet bounded by Marshall, Walnut, and Spring streets (across Marshall from the Marston apartments building and Coupa Café): 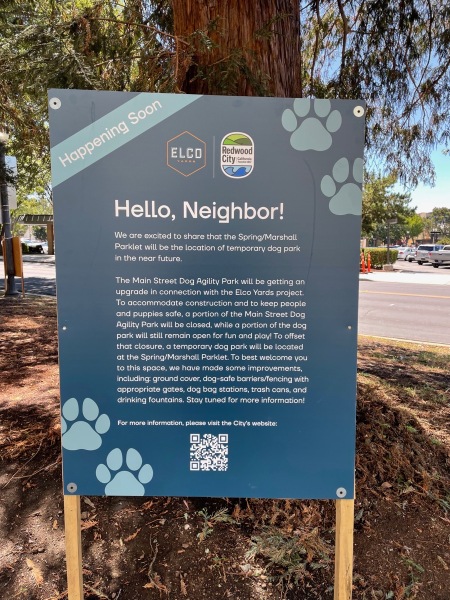 The sign has the logo of the Elco Yards project (which is the large project taking place where Towne Ford, Hopkins Acura, and the Redwood Roller Rink once stood), and reads as follows:

We are excited to share that the Spring/Marshall Parklet will be the location of [sic] temporary dog park in the near future.

The Main Street Dog Agility Park will be getting an upgrade in connection with the Elco Yards project. To accommodate construction and to keep people and puppies safe, a portion of the Main Street Dog Agility Park will be closed, while a portion of the dog park will remain open for fun and play! To offset that closure, a temporary dog park will be located at the Spring/Marshall Parklet. To best welcome you to this space, we have made some improvements, including: ground cover, dog-safe barriers/fencing with appropriate gates, dog bag stations, trash cans, and drinking fountains. Stay tuned for more information!

Note that the promised parklet improvements have not yet been done; they are anticipated to take a couple of months. But interested parties can keep up with the project by monitoring the Main Street Dog Agility Park’s webpage.

My second item concerns the new CVS Pharmacy that is being built at the corner of Woodside and Bay roads, just across Woodside Road from the existing CVS. After the foundation for that new CVS was completed, on-site work seemed to come to a standstill. However, work around the site — primarily, on the sidewalks along Bay Road and on the Woodside Road/Bay Road intersection itself — continued. In the last week or two, though, work on the building itself resumed; the walls are now being erected, one concrete block at a time: 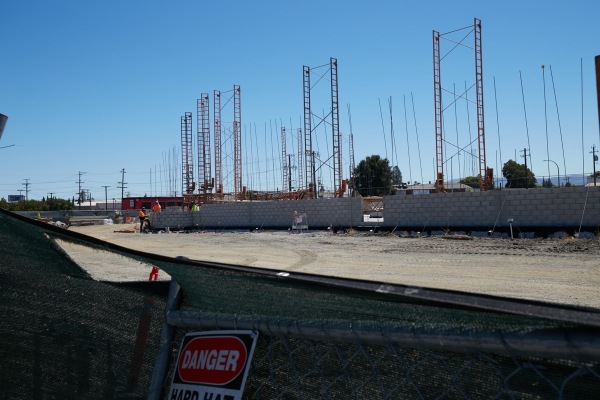 Given the height of the rebar that will run through the walls (the thin metal “wires” sticking up from the wall), those guys in the orange vests have a big job ahead of them. Those ladder-like things, incidentally, hold platforms upon which the workers, and a supply of concrete blocks, will stand now that the wall has gotten too high to continue building while standing on the ground.

Once this new CVS is complete, and operations have been transferred over from the old one across Woodside Road, that old CVS building will finally be torn down, leaving the entire Broadway Plaza site clear and ready for construction. The first step of that project will be to dig the very large (pretty much site-wide) underground garage that will lie beneath the six-building development. So keep an eye on this new CVS; the opening of its doors to the public should be the trigger that finally starts the construction on the 11.2 acre main site across the way.

The concerts in Stafford Park may have come to an end for another year (and the final Music on the Square concert will take place on September 2), but for those who aren’t willing to let go, the concert series sponsored by the Port of Redwood City is about to get underway. Consisting of a whopping 12 concerts, the first kicks off on Saturday, September 3, at 3 p.m. when the band “Dutch Uncle” plays classic rock and dance tunes. You’ll find the port’s waterfront stage at 451 Seaport Court; from Seaport Boulevard turn left at Seaport Court (there is a signal) and then, when you see the parking lot on your left, turn in and park (at no cost). You should have no trouble finding your way to the outdoor stage from there.

For the full list of performances, check out the Port of Redwood City’s Events page, here.

On the subject of activities at the port, PortFest is coming soon! With games, food and drink, boat rides, and opportunities to see sea life, PortFest gives us all plenty of reason to visit the Port of Redwood City. PortFest this year will take place on Saturday, October 1; see the PortFest webpage for full details. And don’t miss it: Redwood City’s port is truly one of its crown jewels, and PortFest shows it off in all its glory.

Lastly, I’ll note that this weekend — August 27 and 28 — marks the final performances of Shakespeare in the Park. Unlike in past years, when the large lawns in front of Sequoia High School served as the venue, these performances are being put on at the Valota Road end of Red Morton Park. There will be one performance each day (Saturday and Sunday), from 4 – 5:30 p.m. Bring a lawn chair, or simply sprawl in the grass, and enjoy San Francisco Shakespeare Festival’s performance of the classic (and hilarious) “Much Ado About Nothing.” Performances are completely free, so why not get out and join your fellow Redwood City on what is promising to be a beautiful afternoon?