A lot of things attract me to a development project — work trucks, construction noises, a dumpster on the street — but nothing more so than a covering, either on a construction fence or on the building itself. I can sometimes understand the need to cover a building — to provide shade for the workers, perhaps, or as a protective barrier to prevent dropped materials and tools from falling onto the adjoining sidewalk, where they could harm an innocent passerby. They are also useful to keep excess sprayed stucco and paint from making their way to nearby cars, trees, and people. But I sometimes wonder why building windows get covered, and why most construction fencing is similarly made opaque. To my mind, these visual barriers simply heighten my curiosity. And often, I can still find a way to peek inside.

This week I took an 11-mile walk, one that led me to a number of projects that were in some way covered up. First up, I dropped by Red Morton Park to check on the Veterans Memorial/Senior Center project. When last I visited, the Herkner pool had been torn out, and there were signs that the adjacent buildings were being prepped for demolition. On this visit, although construction fences surround the work area — fencing that is almost entirely covered with black knitted polyethylene mesh netting — there were large open gates through which construction equipment could come and go. While I did employ my usual technique of holding my camera just over the top of the fencing, I got some of my best pictures by simply pausing momentarily in front of those open gates and taking a picture in the conventional manner. Like this one:

The above picture, which I took while standing on the sidewalk alongside Madison Avenue, shows pretty clearly that all of the buildings that once stood where the new Veterans Memorial/Senior Center (VMSC) building is to be constructed have been entirely cleared from the site. That includes the VMSC Annex, the Sid Herkner Pool building (and the pool), and the NFL Alumni Association building. All are gone, and currently work is underway to prepare the ground for the new building’s foundation.

Here is another view of the site, taken from the sidewalk adjacent to the existing VMSC building, peeking over the construction fencing (the street you see, which is now inside the fencing, is the bit of Nevada Street that formerly extended into the park; it will be removed and replaced with a “promenade” that will extend into the park between the new VMSC building and the to-be-built-someday YMCA building): 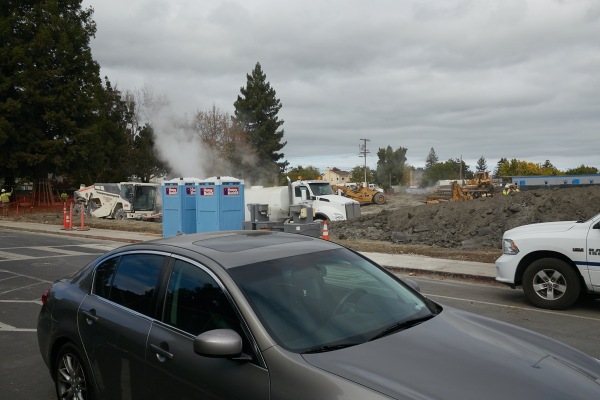 While at the park I spent some time over by the Magical Bridge Playground, but I’ll leave that for a future post. Instead, continuing on to Woodside Road, the 10-unit condominium development being built on the site of Thaibodia Restaurant is partially covered, but not so much that you can’t see what is going on. That building is about to receive its exterior finishes (which, it appears, will be stucco):

Similar to the above, I also visited the site of the Habitat for Humanity project being built on Jefferson Avenue. As you can see from the following picture, the building’s sides have been completed (and look quite nice) while the building’s face is still receiving plenty of attention from the work crews: 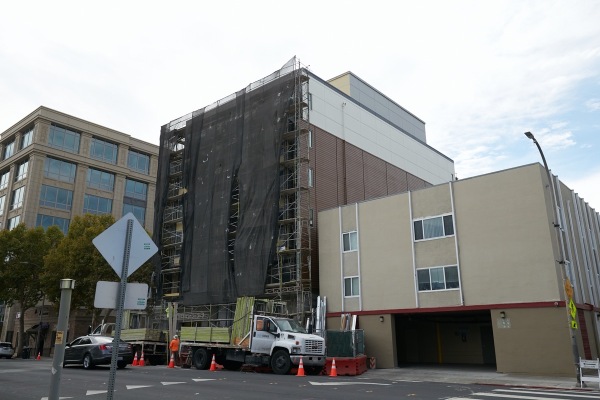 This building will contain 20 condominiums, all of which will be sold at below-market rates to qualifying buyers.

Heading over to Main Street, there is paper up in the windows of the two retail spaces in the Independent Order of Odd Fellows building. Those spaces together used to be home to Ralph’s Vacuum & Sewing Center (which can now be found on Broadway, within the Hotel Sequoia building). 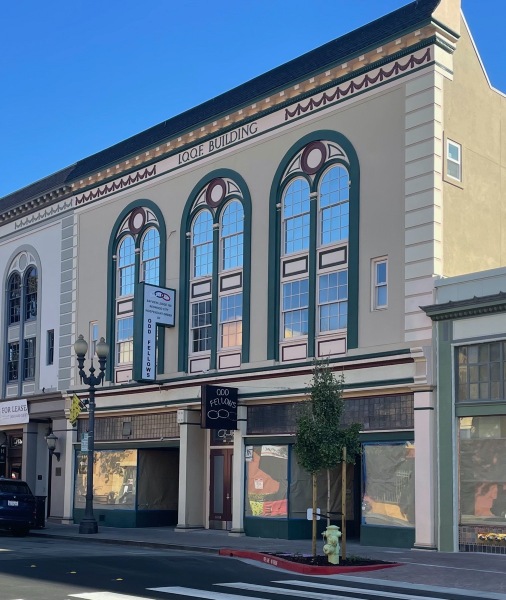 I took a peek beyond the paper — there are some gaps — and can report that there is nothing as yet going on in either of those spaces. No signs that anyone is moving in (and in fact I believe that these spaces are still available for lease). While I was there, I also checked out the building next door: last week I had mentioned that the three (two, really) retail spaces behind the historic facade of the large mixed-use building at 855 Main St. had had their windows papered over, and I speculated that perhaps the interiors were being fitted out for a retail tenant. No such luck, as it turns out: the single large retail space that sits behind those facades sits empty and untouched, at least for now.

I can report that at least one downtown building that recently had its windows covered over is indeed being fitted out for new tenants — but if you’ve been by lately, you probably already know:

Yes, as the brightly colored window stickers indicate, Wells Fargo Bank is indeed coming to the relatively new four-story brick building at the corner of Jefferson Avenue and Broadway (the four story building that is otherwise home to the Chan Zuckerberg Initiative). Wells Fargo is taking the lion’s share of the building’s ground floor retail space, as indicated by the window coverings along the Jefferson Avenue side of the building. Along Broadway, however, there is a bit more variety: 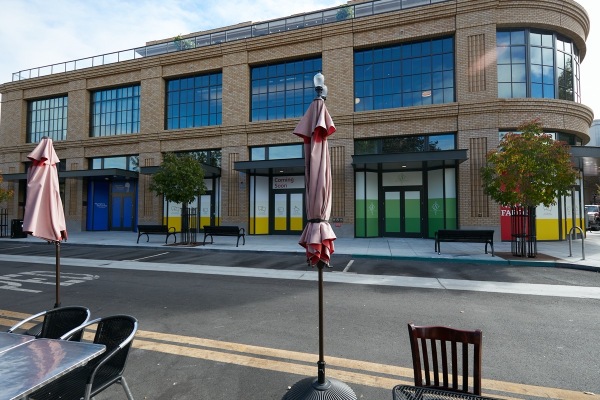 The doors and windows covered in white and yellow will look into Wells Fargo. The one section covered in green and white will be a very small (as in, about 100 square feet) floral design shop — Aili Ice Designs. You may recall Aili Ice Designs from back when they had a shop on Broadway next to the Broadway Masala restaurant; a fire in that restaurant forced Aili Ice to close her Redwood City store. This new outlet, although small, marks a return to Redwood City for this acclaimed floral designer.

More significantly, if you judge by square footage, is the section of doors and windows to the left that are covered over with bright blue stickers. These are clearly marked “Humphry Slocombe Ice Cream,” and indeed will be an outlet of that popular San Francisco-based ice cream vendor. At one time Humphry Slocombe had hoped to open this Redwood City location in time for summer, but clearly things didn’t go as planned. Whenever they do open, though, theirs will be a welcome addition to Redwood City’s downtown restaurant scene.

As for Wells Fargo, the folks who brought us the building shown above, Lane Partners, are now hoping to redevelop the site currently occupied by Wells Fargo Bank, at 1900 Broadway. In addition to gaining city approval for that new project — something that Lane Partners has yet to do — they need to find a new home for Wells Fargo Bank, and this building at 2075 Broadway is apparently that new home. Whether Wells Fargo will operate out of both locations while Lane Partners works to secure approval of their new project, or whether Wells Fargo will move to this new location and close their existing one, I have yet to hear. But they, along with Aili Ice Designs and Humphry Slocombe Ice Cream, will at long last bring some degree of life to this relatively large, extremely prominent downtown retail space, which has been sitting empty for over two years.

Heading down Main Street and turning onto Stambaugh Street, I’ve been watching the old “Holmquist Hardware” building since at least 2016, when I first wrote about it. This building, which was not actually a hardware store but instead was a machine shop (the hardware store was originally next door, after which they moved into the building across Stambaugh Street now occupied by Savers), is a small, but historically beautiful old building: 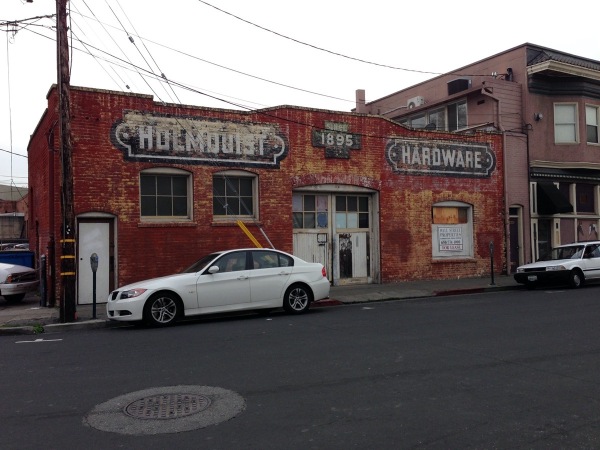 It has been idle for as long as I can remember. Apparently, the building had some sort of environmental issues — asbestos, I believe — making it almost impossible, from a financial standpoint, to rehabilitate. Fortunately, there is that word “almost.” Someone, it seems, has decided that circumstances have changed, and that the building can now be made usable again. Some months ago the building was tightly wrapped in plastic, and the building’s front facade, at least, was given some attention. Recently that plastic was removed, and a more normal construction fence was erected in front, making it possible for us to see the changes that have been wrought, so far, to that facade:

I need to go back and see if I can get a better look at the work going on in and around this building. But the fact that it is being touched at all is extremely encouraging; to my eyes it is a great looking little building, one that would make for a wonderful little office or retail space.

My last covered project is one that is extremely hard to miss:

Along with the old hospital, the significantly smaller “Oak Building,” which was located along Maple Street, was marked for demolition. Progress on that project is much farther along: 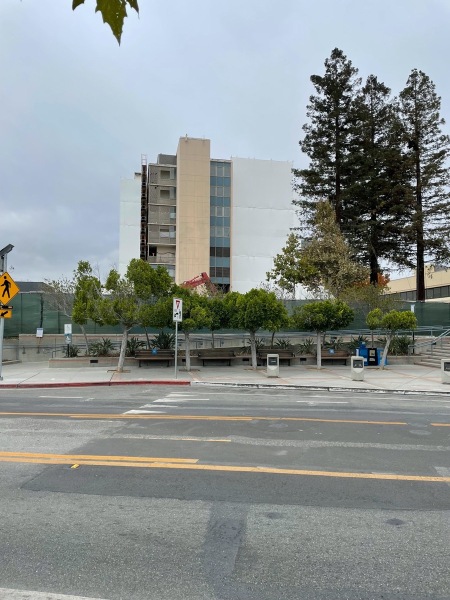 The Oak Building used to stand behind the trees and the green construction fencing you can see in the above photo — where the backhoe is doing its work. Note the Tower building, which stands behind where the Oak Building once stood; from this angle you can see that the building isn’t as tightly wrapped as the view from Veterans Boulevard would indicate.

Once both buildings have been completely demolished, Kaiser plans to turn the resulting space into a mix of surface parking and landscaped open space. That open space will apparently include a couple of gardens (plans show a “healing garden” and an “urban garden”) and a small children’s playground. Plus, along the main walkway that will slice through this new area will be stalls for a farmer’s market.

Covering up a building in an attempt to keep out prying eyes ironically has the opposite effect, at least for some: it makes us wonder all the more what is going on inside. Fortunately, unless the cover is tightly applied, as in the case with the Wells Fargo Bank project, one can often still get a glimpse behind the curtain. That, combined with other sources (published plans, building permits, and the like) and, yes, by simply asking either someone at the city or someone involved with the project, the curious can often learn enough to satisfy that curiosity, and make the project undercover no longer.

Long time readers will know that I enjoy surveying the Halloween decorations that start appearing around Redwood City at this time of year. Although I’ll leave most of the Halloween news for a later post, I did want to highlight what may be this year’s stand-out decoration, in case anyone is interested in getting in on the action. Two years ago the hot decoration was a 12-foot-tall skeleton, one of which I found at the corner of Fairview and Redwood avenues (another stood in Menlo Park, on University Avenue; I saw today that it is once again standing tall this year). For 2021, the standout decoration just may be an 8-foot-tall dark angel, two of which I’ve found on separate properties in the Stambaugh-Heller neighborhood. Here is one of them:

These things are really cool — and pretty creepy (and intended for indoor use — but who would put one of these things inside?). Apparently, the angel talks and lights up at night (I’ve only seen them in the daytime, so far). Home Depot sells them, as do some other retailers (but they appear to be sold out at least in some places).

I’ll be keeping my eyes out; I won’t be surprised to discover more of these angels before the end of the month. Along with all kinds of Halloween goodness, that, if the past is any guide, I’ll be reporting on in two weeks…