Watching downtown Redwood City being boarded up in preparation for last Tuesday’s George Floyd protest rally was certainly interesting. The sheer number of windows and doors that were boarded up was pretty impressive. And although most of the protective work was done downtown, a fair number of businesses all around the city decided to protect their storefronts as well. A number of stores up and down El Camino Real, for instance, boarded up, as did at least one business close to the main entrance to Sequoia High School. Fortunately the rally — which was a large one, apparently: the Daily Journal reported that in excess of 1,000 people attended — was a peaceful one, and it does not appear that the vandalism that accompanied rallies in some other cities manifested here. I don’t know if those interested in wreaking havoc simply didn’t show up, or did but were deterred by the seemingly endless walls of plywood. Whatever the case, the amount of wood that was used and the speed with which it was erected — it all went up in about a day and a half — was really impressive.

Here was one well-equipped crew that apparently was trying to decide the best way to board up the windows and doors of the relatively new office building at 889 Middlefield Rd. (the one that sits directly behind the Fox Theatre): 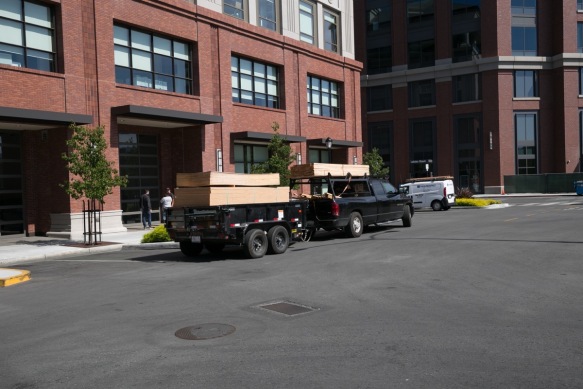 And here is Milagros, at the corner of Middlefield Road and Main Street: 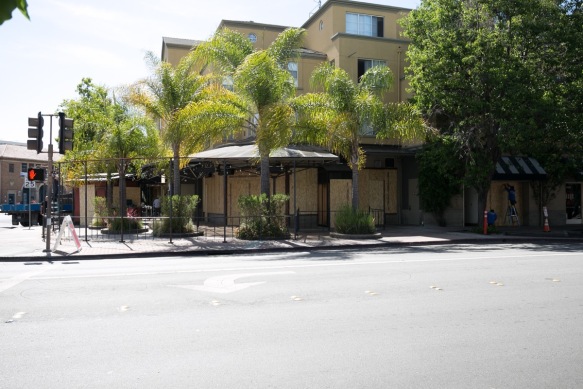 And of course both the historic courthouse building and the Fox Theatre were boarded up for protection. I was particularly pleased to see that the Fox Theatre staff then encouraged people to express themselves on the plywood panels that protected that particular building:

I walked or drove through downtown each day this week in order to monitor the progress of the construction. Curiously, the panels went up quickly, but are coming down very slowly. As of Friday at midday, they’re pretty much all still there — even though the protest was on Tuesday afternoon and the county curfew was only in place on Tuesday and Wednesday nights. I would think that restaurants and merchants alike would want to rip those panels off and re-expose their businesses facades: the plywood makes for a very forbidding look. Perhaps they’re just waiting for the weekend. Or perhaps the crews that put the wood up (and presumably will take it down again) are busy and simply can’t get back to take the panels down right away.

In any case, my main walk this week was on Monday: Tuesday and Wednesday had forecast high temperatures in the 90s, and I wasn’t interested in taking a long walk in those conditions. Monday was delightful, however, so I spent some time on the other side of Highway 101 before coming back along the Maple Street overpass and wandering through downtown. I spent some time on Oddstad Drive, both to check on the RVs that are parked along there these days, as well as to check on one of the storefronts that is being renovated.

Oddstad Drive, in case you aren’t familiar with it, runs parallel to and up against Highway 101, behind the strip center on Veterans Boulevard where Hoot Judkins Furniture is located. This is very much a business district; Oddstad Drive’s most well-known tenant is probably the Jewelry Exchange, although those of you with four-legged friends might be more familiar with its next-door neighbor, Wag Hotel. In any case, for some reason Oddstad Drive and the intersecting Hansen Way have become a popular place for RV’ers to park their rigs. When I was there on Monday, I walked both streets and counted a total of 39 RVs just on those two:

I had wanted to pay this site a visit on Monday because later that evening the city held a Zoom meeting on the subject of Safe Parking for RV’ers. As I mentioned last week the city has been considering using a large gravel lot at the corner of Maple and Blomquist streets — just over Highway 101 from Oddstad Drive, in fact — for a temporary RV parking area. During the Monday meeting two councilmembers and a couple of city staffers presented the plan that they hope to bring to the City Council later this month, and took comments. If you are curious, the meeting was recorded; you can watch it here. If you would rather just see the slides that were presented, those can be found here. But know that the long-term goal of this effort is to “reduce the number of RV/motor homes on the street and identify permanent housing solutions for RV/motorhome residents.” As outlined this plan should significantly reduce the number of RVs on the city’s public streets; many would spend their nights at the new Maple Street lot, while a certain number of others that will have been registered with the city and given a parking medallion would continue to park on a more limited number of city streets.

The plan is for the City Council to hold a Study Session on the Safe Parking Plan. That session is tentatively scheduled for June 22. Ideally an ordinance governing the plan will be adopted at the Council’s July 13 meeting, with a second reading of that ordinance occurring at the Council’s July 27 meeting. The program would then officially begin sometime in August or September, as would stepped-up enforcement of new parking regulations that would prevent most overnight parking of RVs on public streets — the exceptions being the limited number of RVs that have registered with the Safe Parking program and RVs owned by vacationing Redwood City residents that are being loaded for, or unloaded after, a trip.

In addition to checking out the numerous RVs parked along the streets in the Oddstad Business District, I also peeked into the storefronts between La Petite Playhouse (a rather interesting business that hosts camps, birthday parties and other child-oriented activities in their underwater-themed playhouse) and Dennis Uniform, who sells school uniforms.

Between the two are a couple of storefronts that are being remodeled into what appear to be offices. One of the folks at Hoot Judkins tipped me off to the remodeling, and indicated that it was being done on behalf of the Chan Zuckerberg Initiative, who currently occupies all but one ground-floor space in the new building at the corner of Broadway and Jefferson Avenue, and who has pre-leased the three-story office building under construction at 1180 Main Street. The space that CZI is apparently remodeling on Oddstad Drive isn’t particularly large, and a peek into the windows and an examination of what used to be the loading dock out back (where they’ve replaced the roll-up door with some windows and a regular door that might end up leading to a back patio) yields no real clues as to what is going on in this space. Presumably it’ll be used for one of CZI’s “initiatives,” which fall into the categories of science, education, and justice & opportunity. We’ll see…

While downtown I spent some time on Main Street. I stopped to admire what surely will be an outdoor dining space that Angelicas is building in front of their restaurant; it’s coming along nicely.

Close by, I peeked into the windows of the future Mezes restaurant. I think that this restaurant is still in our future, although it’s a bit hard to tell; work is either going very slowly or has stopped altogether. Given the upheaval that our restaurants have experienced thanks to COVID-19, this place could probably go either way. In any case, here is what the place looks like inside at the moment: 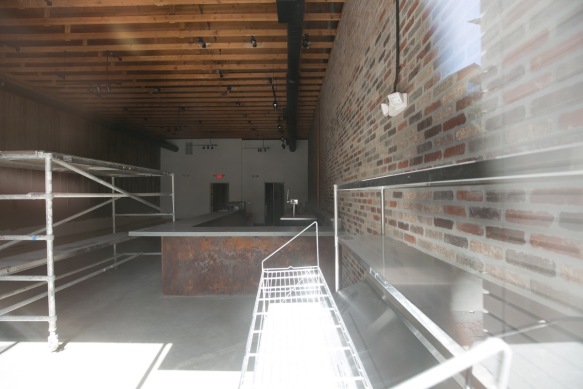 On a related note, as I suspected would happen, the county has given the thumbs-up to outdoor dining at our area’s restaurants, starting on Saturday, June 6. It is now up to cities to decide just when, where and how restaurants will be able to set up outdoors. Redwood City’s Council will be discussing the subject at its next meeting, at 7 p.m. on Monday, June 8. Staff is proposing a slightly complex set of rules that will involve “select rotating temporary street closures in the downtown central business district [primarily along portions of Broadway and Main Street] to accommodate outdoor restaurant dining,” will allow restaurants to place tables on adjacent sidewalks and street parking spaces, and will allow restaurants in retail shopping centers (such as, but not limited to, Sequoia Station and Woodside Plaza) to take over part of their parking lots for outdoor dining, for “carhop dining,” and for takeout service. Street closures will be limited to only certain days and times: possibly only Saturday night, but more likely Friday, Saturday, and Sunday nights. All of this would probably be enabled from sometime around the middle of July through late September. So except for those restaurants that already have outdoor space, don’t expect to see any big changes in the next couple of weeks. And even those popular Redwood City restaurants that already have some outdoor space they can use — LV Mar, Vesta, City Pub, etc. — may or may not start serving there soon: it all depends upon whether or not those restaurants can make the numbers add up given the limited outdoor space they have and given that they still cannot use their indoor dining rooms. We’ll see…

For those of you who look forward to Redwood City’s annual Fourth of July activities, well, as you can imagine this year things will be quite different. One popular activity, however, will indeed be going ahead this year, albeit in a new form. The Redwood City Parks & Arts Foundation will once again be hosting their free “Chalk Full of Fun,” but this year rather than holding their two-day chalk festival on Courthouse Square and along “Chalk Alley” (at Hamilton & Broadway) they will instead be hosting a virtual version. Interested participants that have registered with the Foundation will be given a free pastel Chalk Kit (there are a limited number of these). After then creating their chalk art on their driveway, sidewalk, or street, they will take pictures of their creation and email them to the Foundation. The pictures will be added to an online Chalk Art gallery for all of us to admire.

This free event is open to anyone, and a number of prizes ($20 and $50 gift cards) will be awarded. For more information and to register, head to the Parks & Arts Foundation website. Because the number of kits are limited, those with serious interest in participating should register sooner rather than later. Have fun!

5 thoughts on “Life on the Streets”